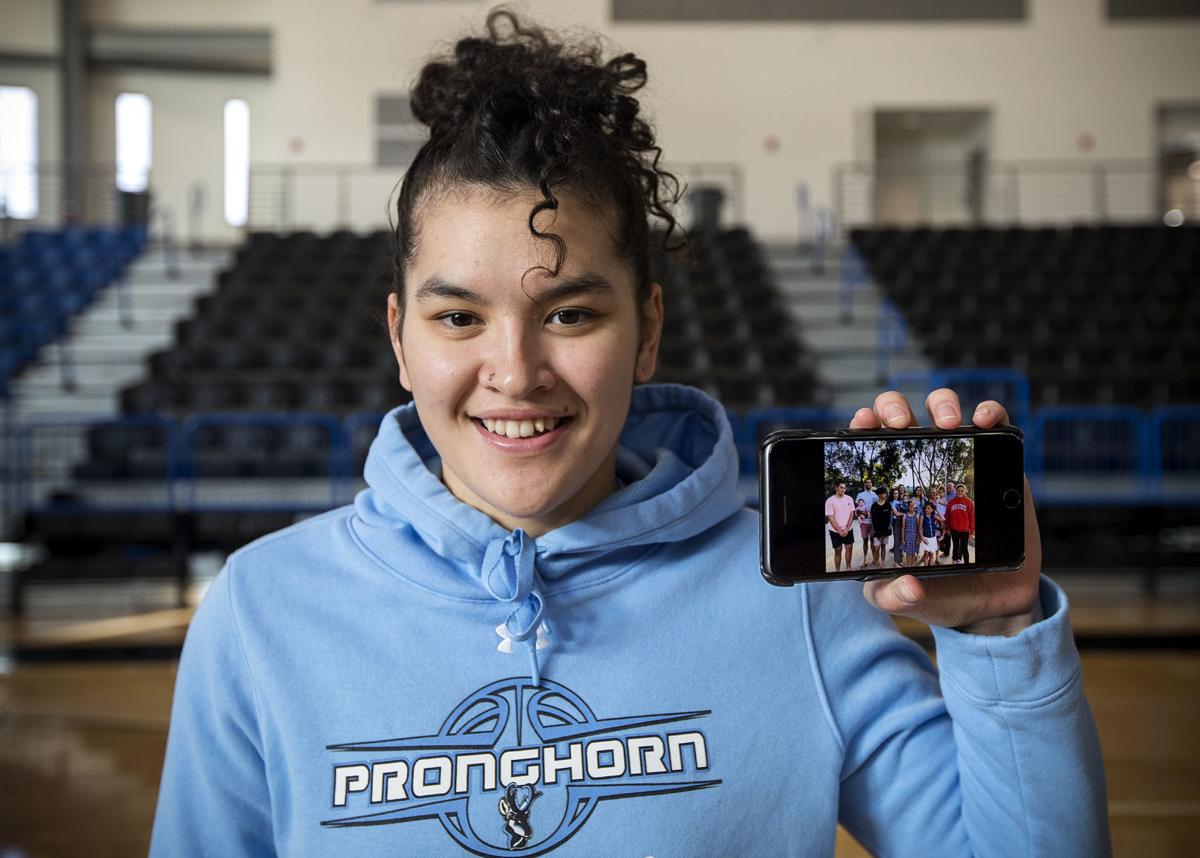 Pronghorns women’s basketball freshman Kobe King-Hawea stands for a portrait and holds up a photo of her family on Wednesday at the Pronghorn Center. 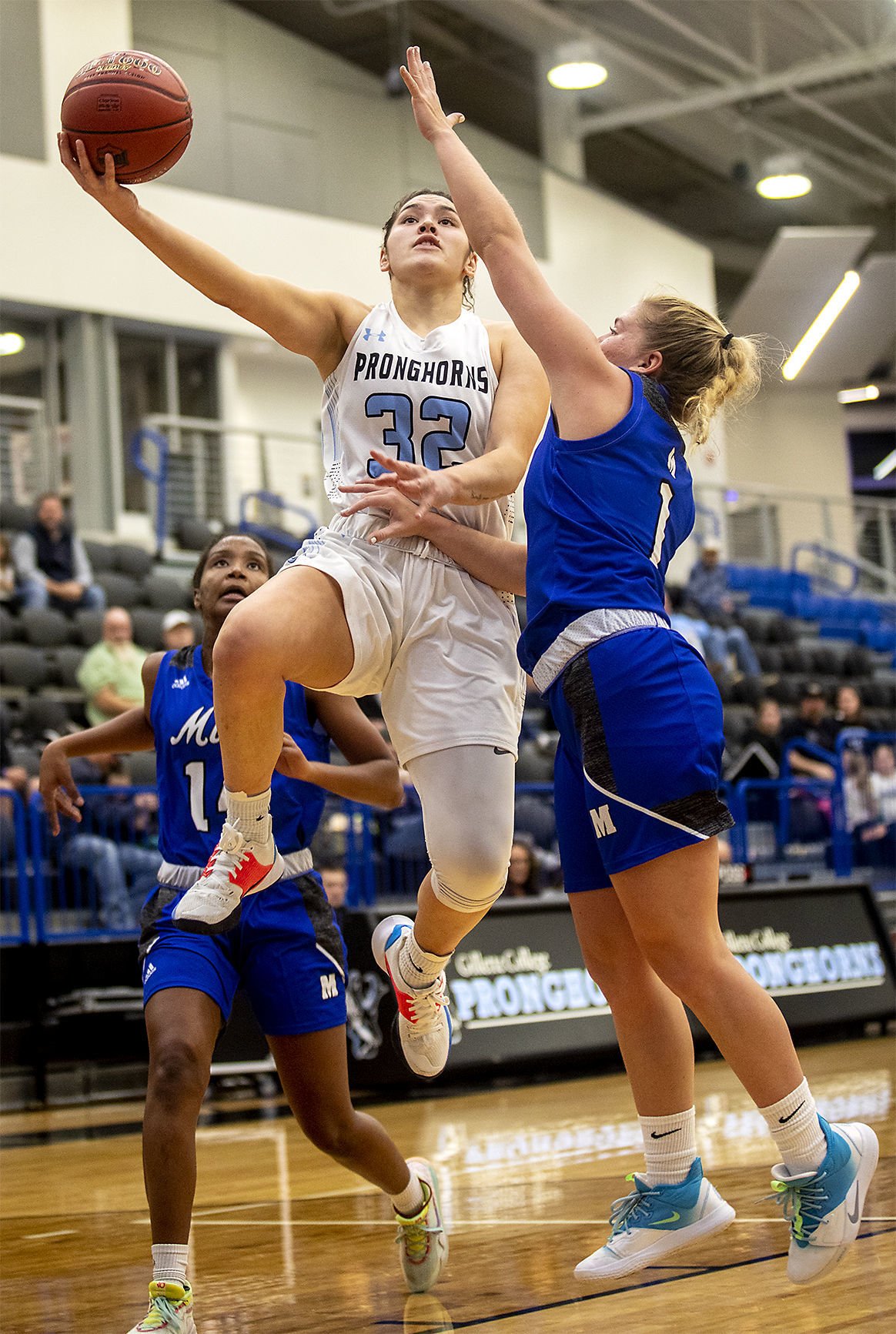 The Pronghorns’ Kobe King-Hawea goes up for the basket in a November game against Miles Community College. 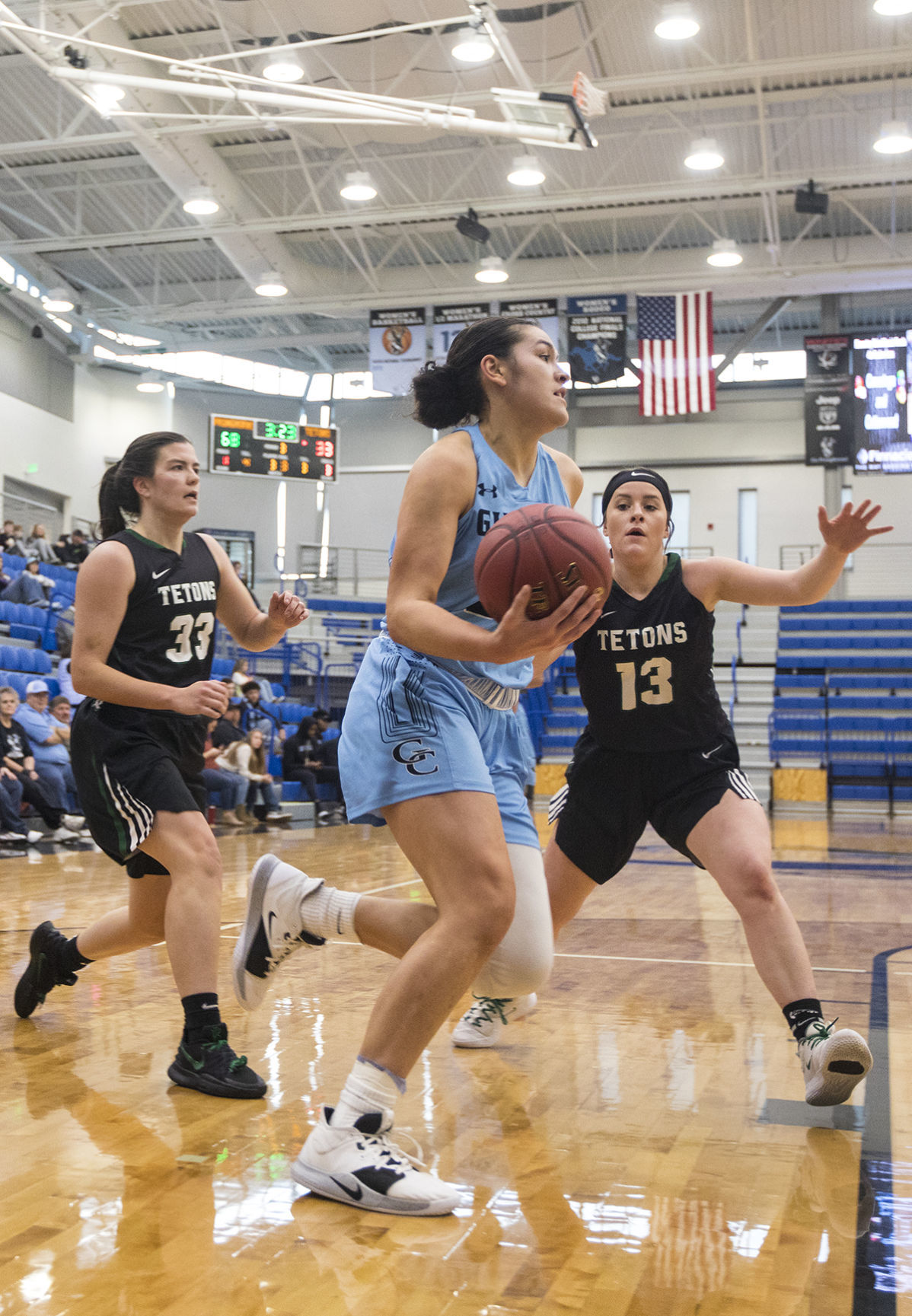 Gillette College Pronghorns Kobe King-Hawea (32) makes her way to the basket during the game on Saturday afternoon at the Pronhorn Center. 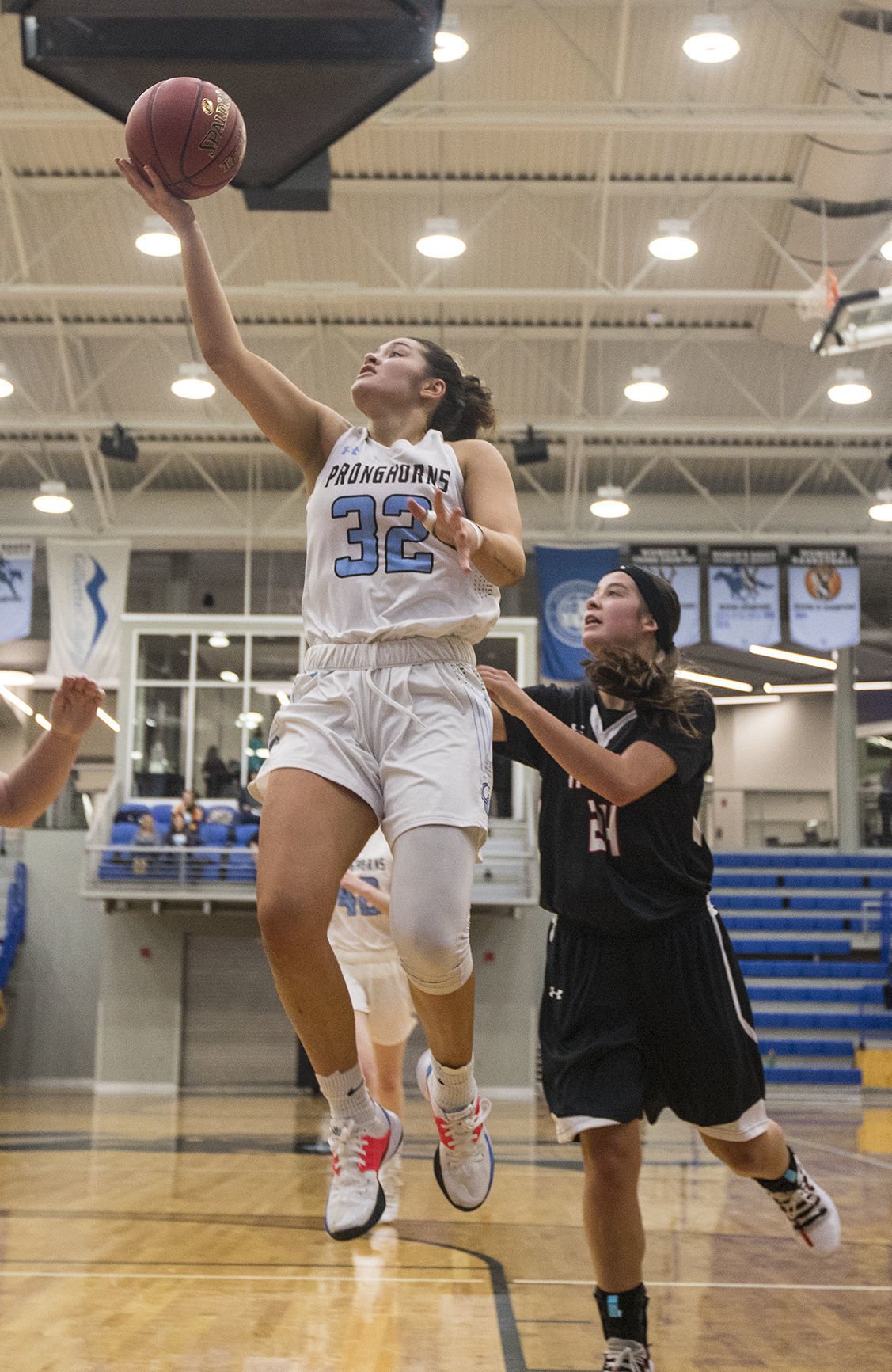 Pronghorns Kobe King-Hawea (32) makes a layup during the first half of the game against Colorado on Thursday night at the Pronghorn Center. 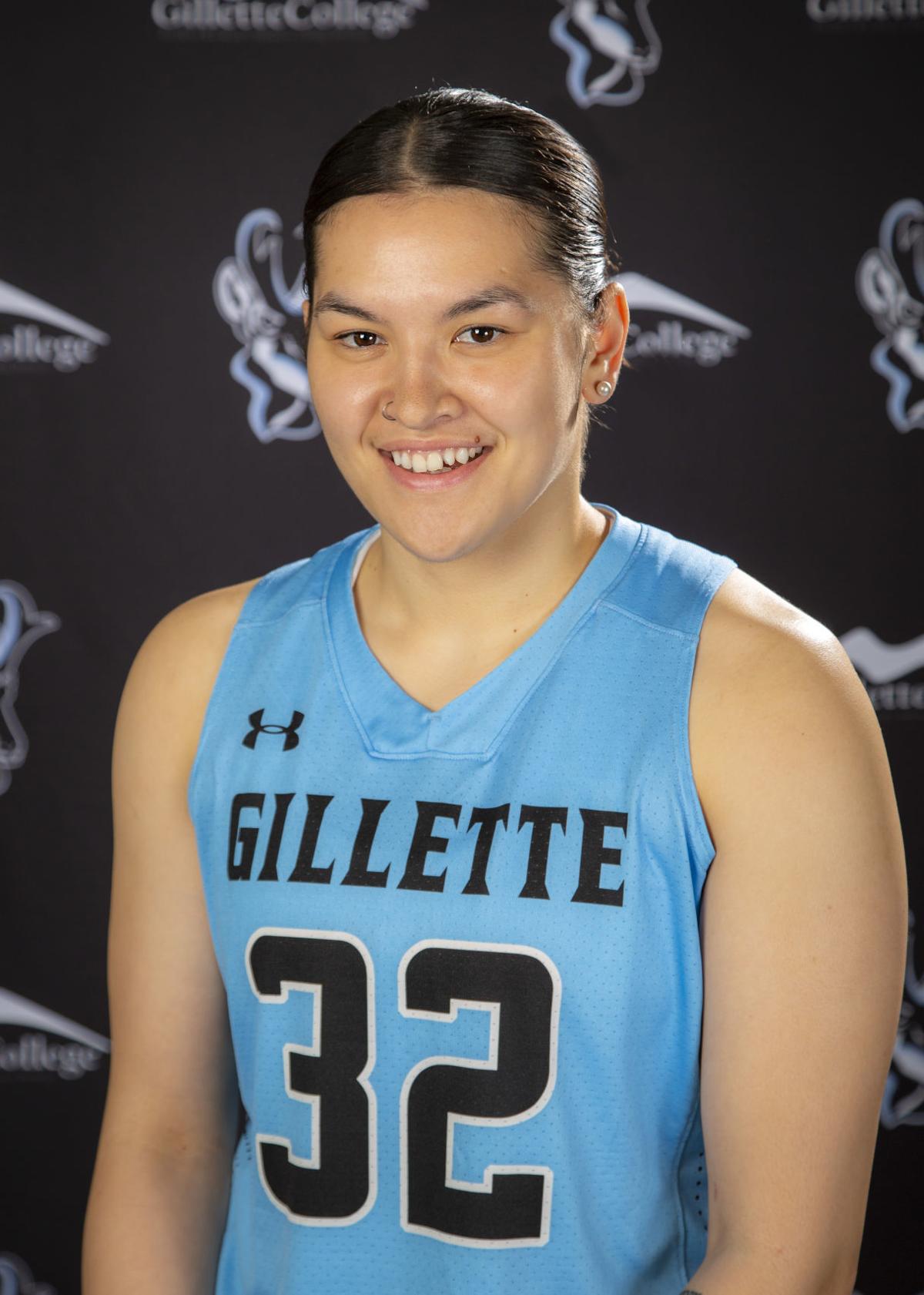 Pronghorns women’s basketball freshman Kobe King-Hawea stands for a portrait and holds up a photo of her family on Wednesday at the Pronghorn Center.

The Pronghorns’ Kobe King-Hawea goes up for the basket in a November game against Miles Community College.

Gillette College Pronghorns Kobe King-Hawea (32) makes her way to the basket during the game on Saturday afternoon at the Pronhorn Center.

Pronghorns Kobe King-Hawea (32) makes a layup during the first half of the game against Colorado on Thursday night at the Pronghorn Center.

From the day she was born, Pronghorn women’s basketball newcomer Kobe King-Hawea was set on the path to success in the hoops world.

Her basketball fanatic father Parlayne Hawea named her after one of the best all-around players in the history of the game: Kobe Bryant.

“That’s a question everyone asks, ‘How do you feel about your name?’” Kobe King-Hawea said. “I’ve been watching him my whole life. He’s such a good player. I try to mimic my game after him.”

Parlayne, who works for Nike and played professional basketball in New Zealand, said Kobe started playing basketball when she was 5 or 6 and grew up watching the Los Angeles Lakers’ legend.

“She used to love watching him,” Parlayne said. “If you look at her (today), she does a bit of a one-step fade away jumper. … She definitely acknowledges such a great athlete that she looks up to.”

On top of the name, she had help from her family. She has nine siblings, and others are named after professional basketball players: Jaylen-Rose, LeBron, and the youngest, 2-year-old Kawhi.

Kobe’s mother, Chareena Hawea, is also involved in basketball and now serves as a referee coordinator.

Kobe’s older brother, Dyson, played professionally in New Zealand and for the national team. And her older sister, Jaylen-Rose, had scholarship offers to college programs in the United States but stayed in Australia to start a family.

Growing up, Kobe would play basketball with her older siblings in the back yard and in various youth leagues in New Zealand and Australia, she said.

The process of becoming one of the top prospects out of Australia had challenges, however.

Kobe dropped out of school in 2015, and almost ended her basketball playing days during that time as well, she said.

“I worked when I was young because I didn’t really like school as much,” said Kobe, who was out for over a year. “But then, obviously, the scholarship came, so I had to go back to school.”

She was discovered by coach Kristen Veal of the NBA Global Academy in Canberra, Australia, in 2017. Kobe became the first female player to receive a scholarship to attend the academy, which is connected with the Australian Institute of Sport’s Center of Excellence.

Many alumni from the academy have gone on to Division I college basketball programs and professional basketball careers.

Kobe’s high school basketball experience was similar to the daily routine of a college basketball player, she said. She studied, played and lived in the academy with her teammates.

“It was tough. We woke up at 6 in the morning, did weights, conditioning and then had class from 9 (a.m.) to 3-3:40 (p.m.),” Kobe said. “And come straight back from class to basketball training for two hours, and do recovery, study session, eat dinner, it just keeps going.”

Kobe received national attention in the United States in February 2018, when Bleacher Report published an article about her, her famous name, and her trip to the Basketball Without Borders Global Camp at All-Star Weekend where she participated in a camp at the Los Angeles Lakers practice facility, where Kobe Bryant used to train.

The pieces all fell together for first-year Gillette College women’s basketball head coach Liz Lewis to pick up Kobe after she graduated in July from the Australian Institute of Sport’s Center of Excellence.

Lewis had recently been hired and was in the process of a mad scramble to fill a roster.

“When I got the job, I just started contacting everyone I knew and just said, ‘Hey, let me know if you know of anybody who’s still available at this point in the year,’” Lewis said. “And thank goodness that the word got around.

“I watched about 30 seconds worth of film on (Kobe), and knew right away that she was a very high-level player.”

“The player who had signed this year from New Zealand sent me a message that said she wasn’t coming, and then literally a day later, I heard about Kobe being available,” Lewis said. “It was meant to be. It just fell into place.”

Kobe, now 19, made up her mind that she wanted to play college basketball instead of playing professionally.

“The more I got older, I kind of realized that education is pretty big,” Kobe said.

Kobe had been a development player with the Canberra Capitals of the Women’s National Basketball League (WNBL) before deciding to play college ball, she said.

Kobe also has an aunt, Marcia (Hawea) Ferris, who lives in Wyoming on the Wind River reservation, and she comes to watch Kobe when the Pronghorns play at home. Kobe lived away from family when she was at the Australian Institute of Sport’s Center of Excellence, but now she lives thousands of miles away and in another hemisphere.

She has a tattoo on her arm that says, “family over everything.”

Kobe, a 5-foot-10 guard/forward, is leading the Pronghorns, averaging 22.8 points and 6.7 assists per game. She has averaged 8.3 rebounds per game as well.

“One of her biggest roles on the team is to be a leader and to bring her experience to help us play at a higher level,” Lewis said. “She’s done a great job not only improving herself, but also her teammates.

“She’s a very unselfish player, almost to the point where sometimes we have to tell her to shoot because she shares the ball so well. One of her goals is to have 10 assists every game.”

Kobe has described herself as a street-ball type of player.

She can handle the ball well and outmaneuver opponents in one-on-one situations. She often pulls up and shoots difficult mid-range jump shots. And she has an uncommon ability to shuttle the ball around the court and tally multiple assists per game.

But there are things she still needs to work on, and a main goal for her is to get more efficient with the 3-point shot, she said.

The Pronghorns (11-1) lost the first game of the season by one point to the Wyoming All-Stars before winning 11 straight. Over the weekend in Williston, North Dakota, Kobe led the team scoring 34 points in Friday’s 82-45 victory over Miles Community College, and then she led again with 26 points in three quarters during the 87-43 win over Williston State College on Saturday.

Kobe plans to play for Gillette College through her sophomore season.

“This team’s just different because we’re all together, and kind of help each other out on and off the court as much as we can,” Kobe said. “I’m kind of noticing that I need to be a teacher on the court. … I kind of teach some of the girls from my point of view, instead of the coaching point of view.”