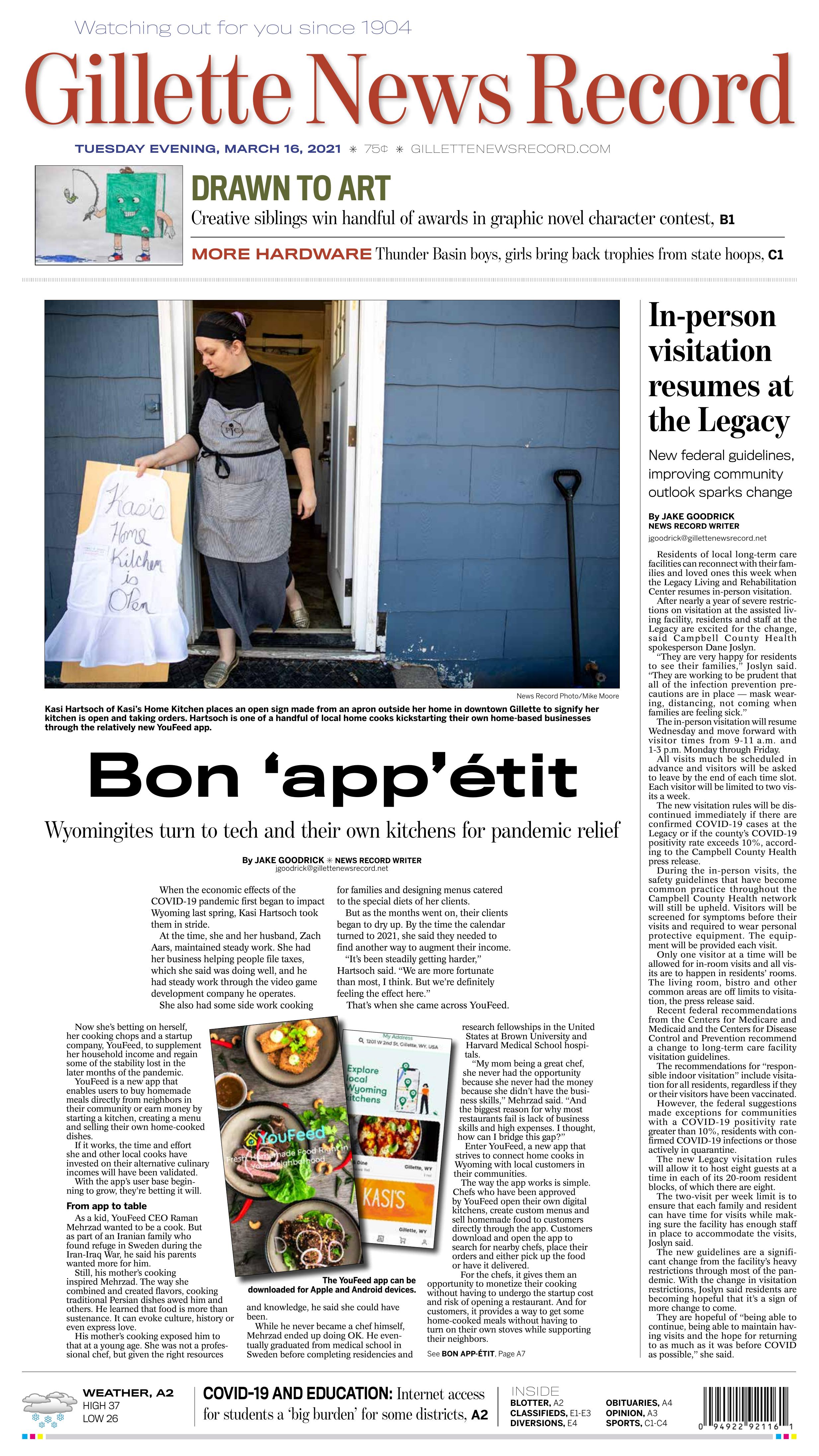 When the economic effects of the COVID-19 pandemic first began to impact Wyoming last spring, Kasi Hartsoch took them in stride. 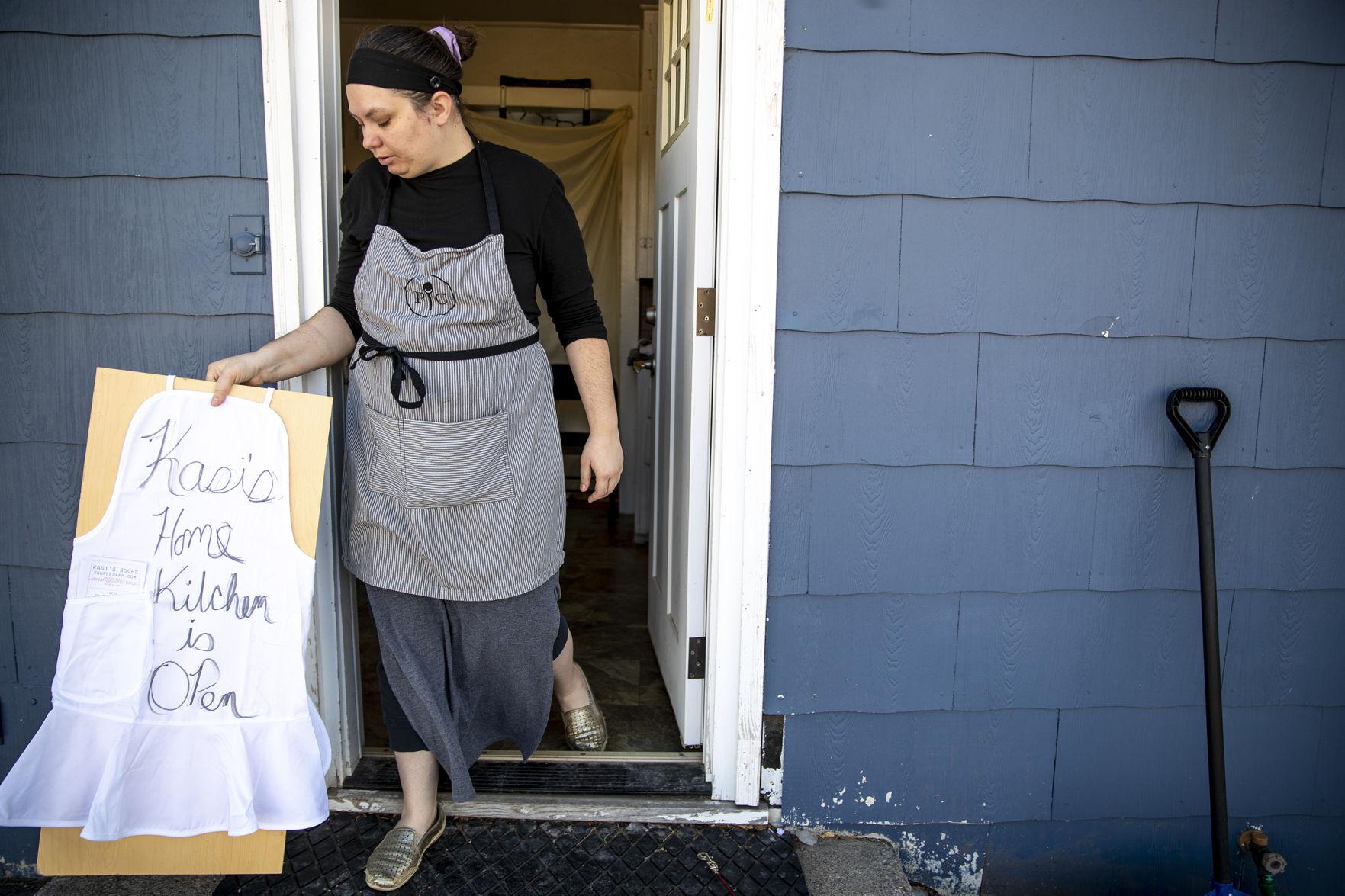 Kasi Hartsoch of Kasi’s Home Kitchen places an open sign made from an apron outside her home in downtown Gillette to signify her kitchen is open and taking orders. Hartsoch is one of a handful of local home cooks kickstarting their own home-based businesses through the relatively new YouFeed app.

At the time, she and her husband, Zach Aars, maintained steady work. She had her business helping people file taxes, which she said was doing well, and he had steady work through the video game development company he operates.

She also had some side work cooking for families and designing menus catered to the special diets of her clients.

But as the months went on, their clients began to dry up. By the time the calendar turned to 2021, she said they needed to find another way to augment their income.

“It’s been steadily getting harder,” Hartsoch said. “We are more fortunate than most, I think. But we’re definitely feeling the effect here.”

That’s when she came across YouFeed.

Now she’s betting on herself, her cooking chops and a startup company, YouFeed, to supplement her household income and regain some of the stability lost in the later months of the pandemic.

YouFeed is a new app that enables users to buy homemade meals directly from neighbors in their community or earn money by starting a kitchen, creating a menu and selling their own home-cooked dishes. 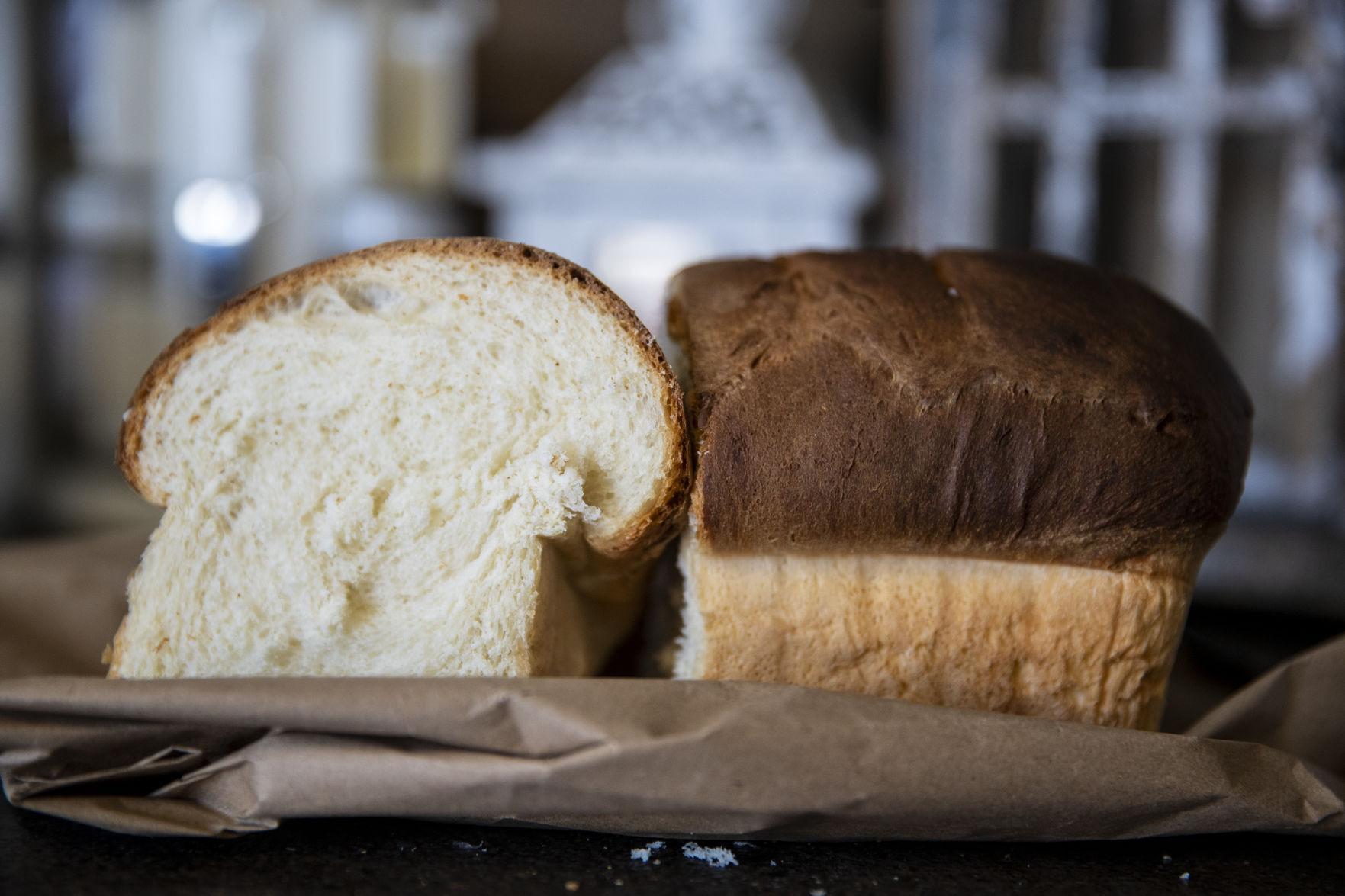 Fresh bread sits on the kitchen counter at Kasi Hartsoch’s home. Hartsoch recently began operating her own kitchen out of her home through the YouFeed app.

If it works, the time and effort she and other local cooks have invested on their alternative culinary incomes will have been validated.

With the app’s user base beginning to grow, they’re betting it will. 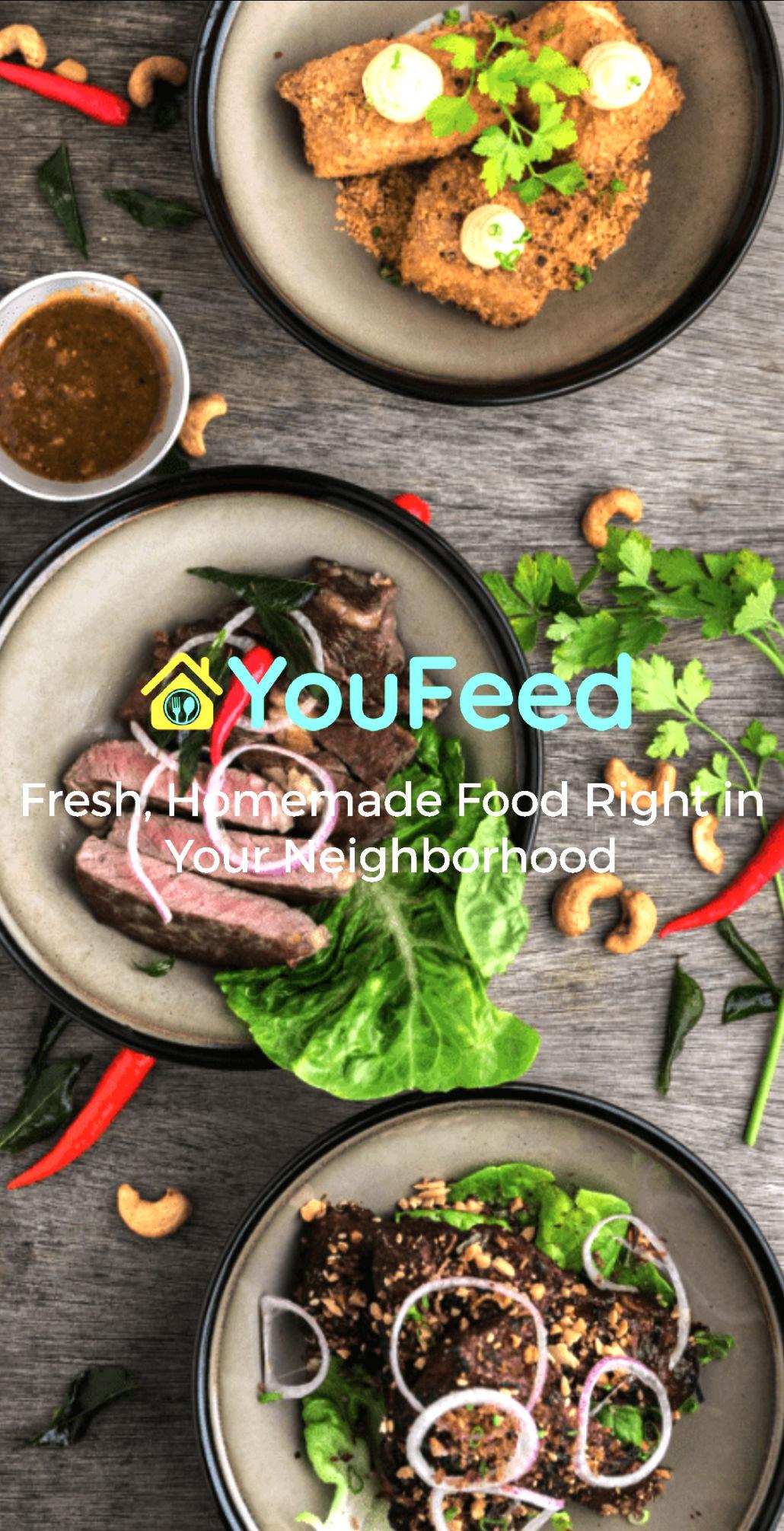 From app to table

As a kid, YouFeed CEO Raman Mehrzad wanted to be a cook. But as part of an Iranian family who found refuge in Sweden during the Iran-Iraq War, he said his parents wanted more for him.

Still, his mother’s cooking inspired Mehrzad. The way she combined and created flavors, cooking traditional Persian dishes awed him and others. He learned that food is more than sustenance. It can evoke culture, history or even express love.

His mother’s cooking exposed him to that at a young age. She was not a professional chef, but given the right resources and knowledge, he said she could have been. 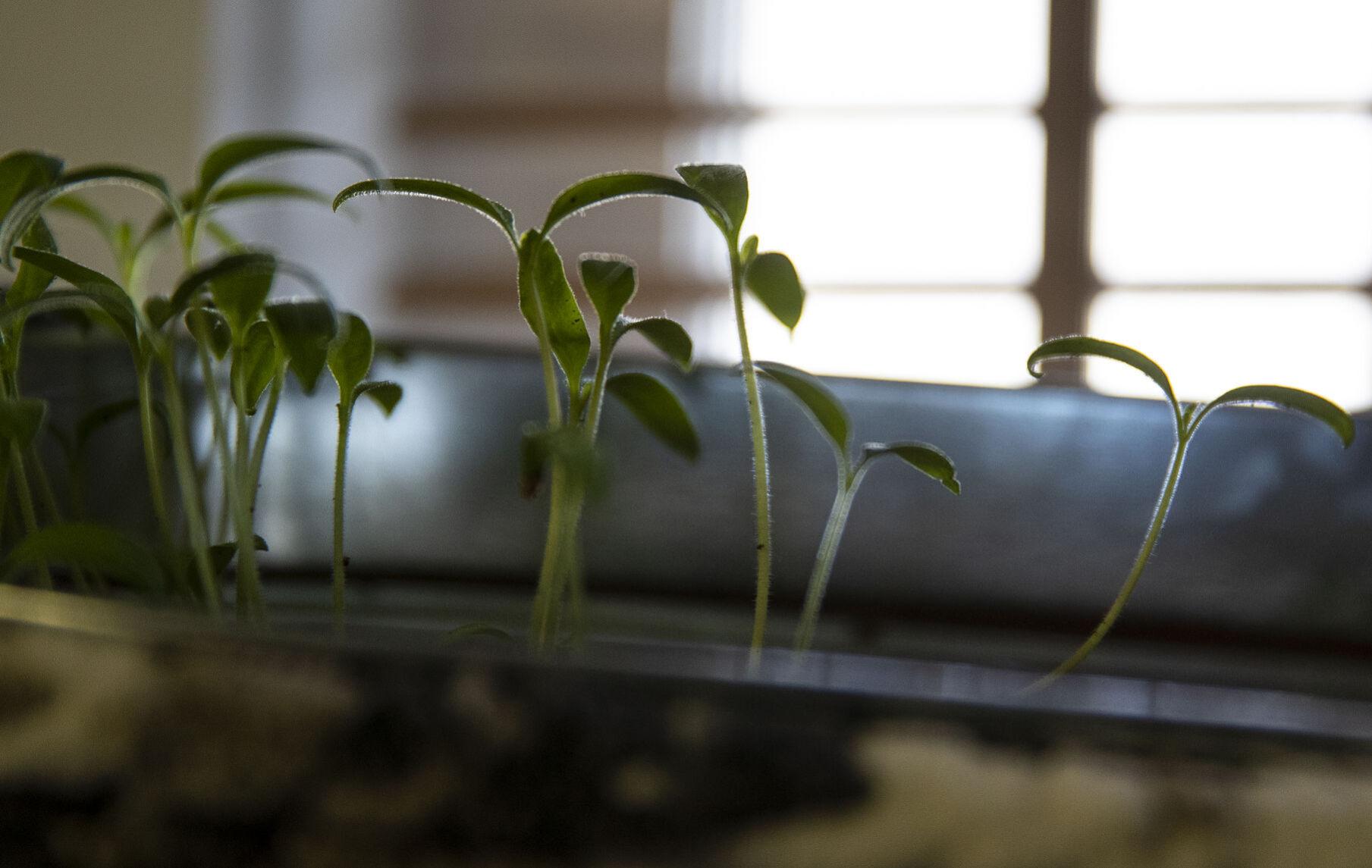 While he never became a chef himself, Mehrzad ended up doing OK. He eventually graduated from medical school in Sweden before completing residencies and research fellowships in the United States at Brown University and Harvard Medical School hospitals.

Enter YouFeed, a new app that strives to connect home cooks in Wyoming with local customers in their communities.

The way the app works is simple. Chefs who have been approved by YouFeed open their own digital kitchens, create custom menus and sell homemade food to customers directly through the app. Customers download and open the app to search for nearby chefs, place their orders and either pick up the food or have it delivered. 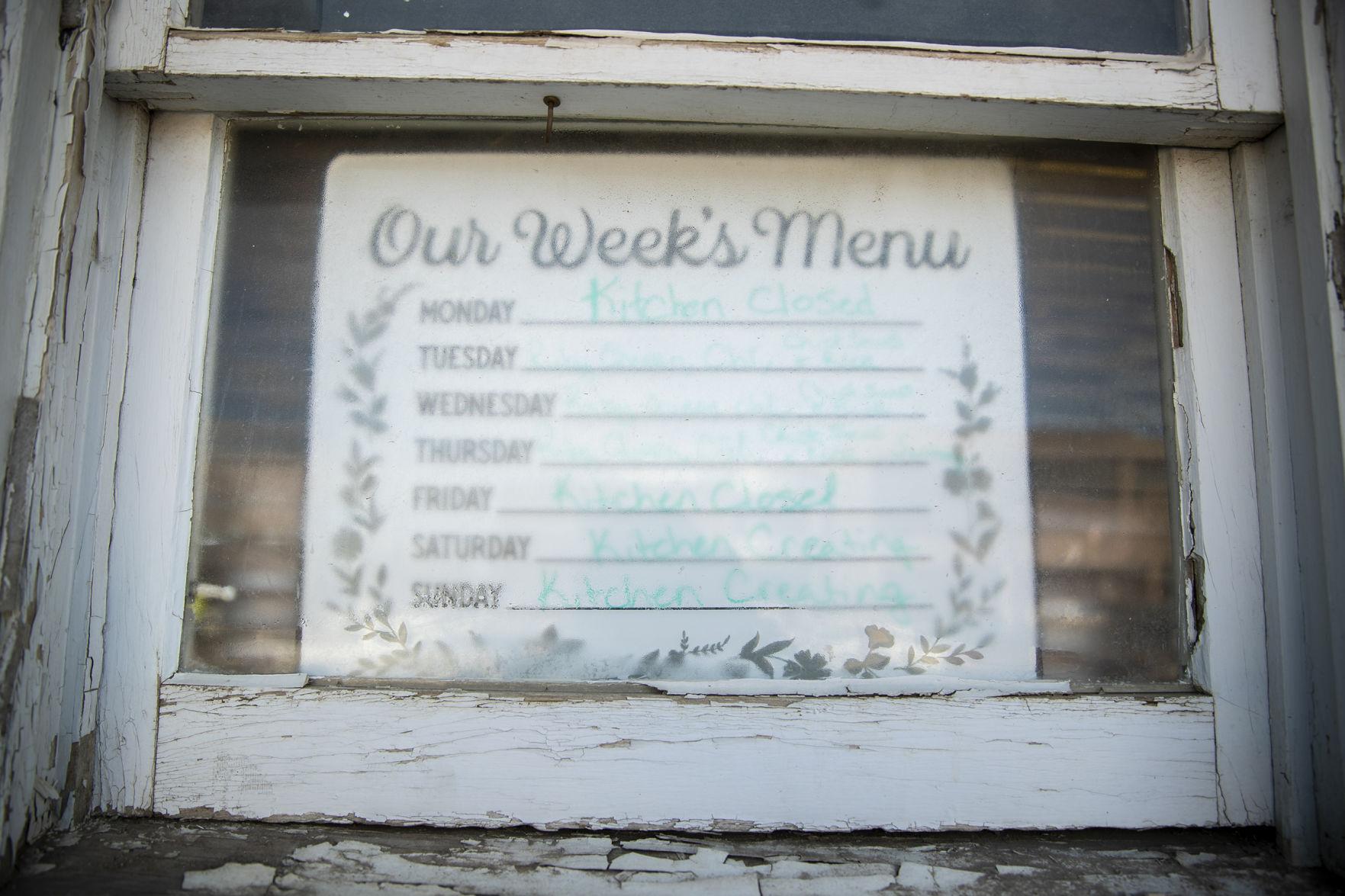 Steam from cooking chili makes Kasi Hartsoch’s open schedule in her home window difficult to see from the outside of her home as she prepares food for patrons Feb. 24.

For the chefs, it gives them an opportunity to monetize their cooking without having to undergo the startup cost and risk of opening a restaurant. And for customers, it provides a way to get some home-cooked meals without having to turn on their own stoves while supporting their neighbors.

“This app allows them to be a mini business owner or restaurant owner,” Mehrzad said. “It’s their kitchen and they get the majority of the profit.”

But Mehrzad, the app’s CEO, is a physician who lives in Rhode Island. So why Wyoming?

The Wyoming Food Freedom Act played a role. The bill allows food producers to sell their own food directly, such as at farmers markets and their homes, without state licensing, inspection or regulation.

Restaurants are regulated and home kitchens are not.

“Safety is our No. 1 priority,” Mehrzad said.

To ensure food safety, YouFeed has standards cooks must meet before being allowed on the app. After a multi-step interview process with each prospective chef, a background check is done and photos of their kitchens are evaluated and approved.

From there, the chefs have to get a valid food handling certification, which YouFeed helps them with through the State Food Safety Certification food handlers card course. 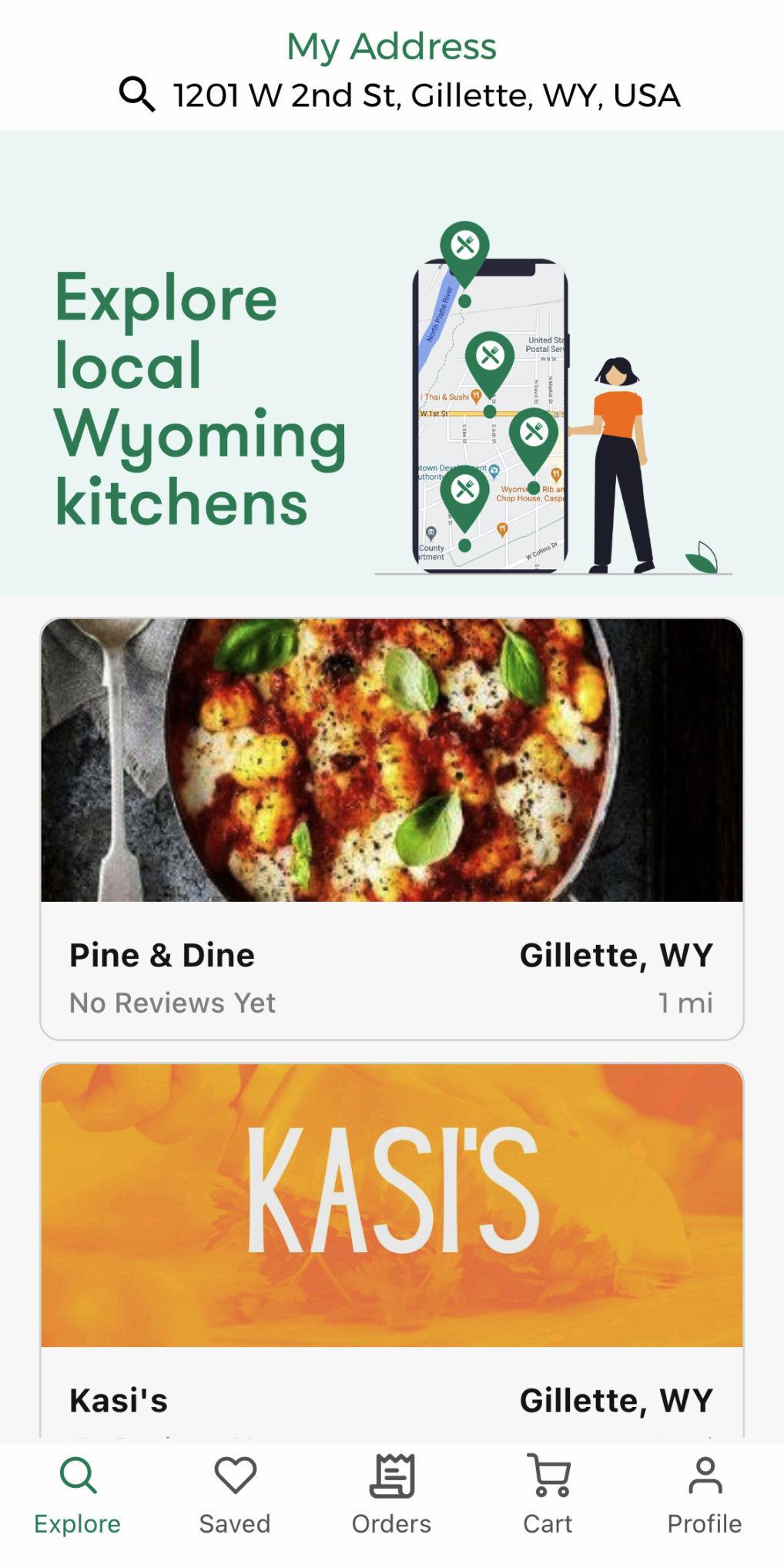 There also are YouFeed Academy courses the company offers to further train its cooks, as well as a resident consultant who has started several Wyoming restaurants and can offer guidance to the newcomers to the food industry.

Once certified, the chefs are free to open their home kitchens for business.

The app also comes with the potential of bringing more diverse takeout offerings to Gillette.

While there may or may not be the demand for a Thai, Korean or Persian restaurant in this corner of Wyoming, there may be home cooks who can share those foods through the app and expand a city’s cuisine offerings.

“They have an opportunity now to, without the startup cost, provide their own culture’s food and give that to the public,” he said. “I would love to live in a city where on every corner, every neighborhood, there’s a different type of dish I could taste every single day.” 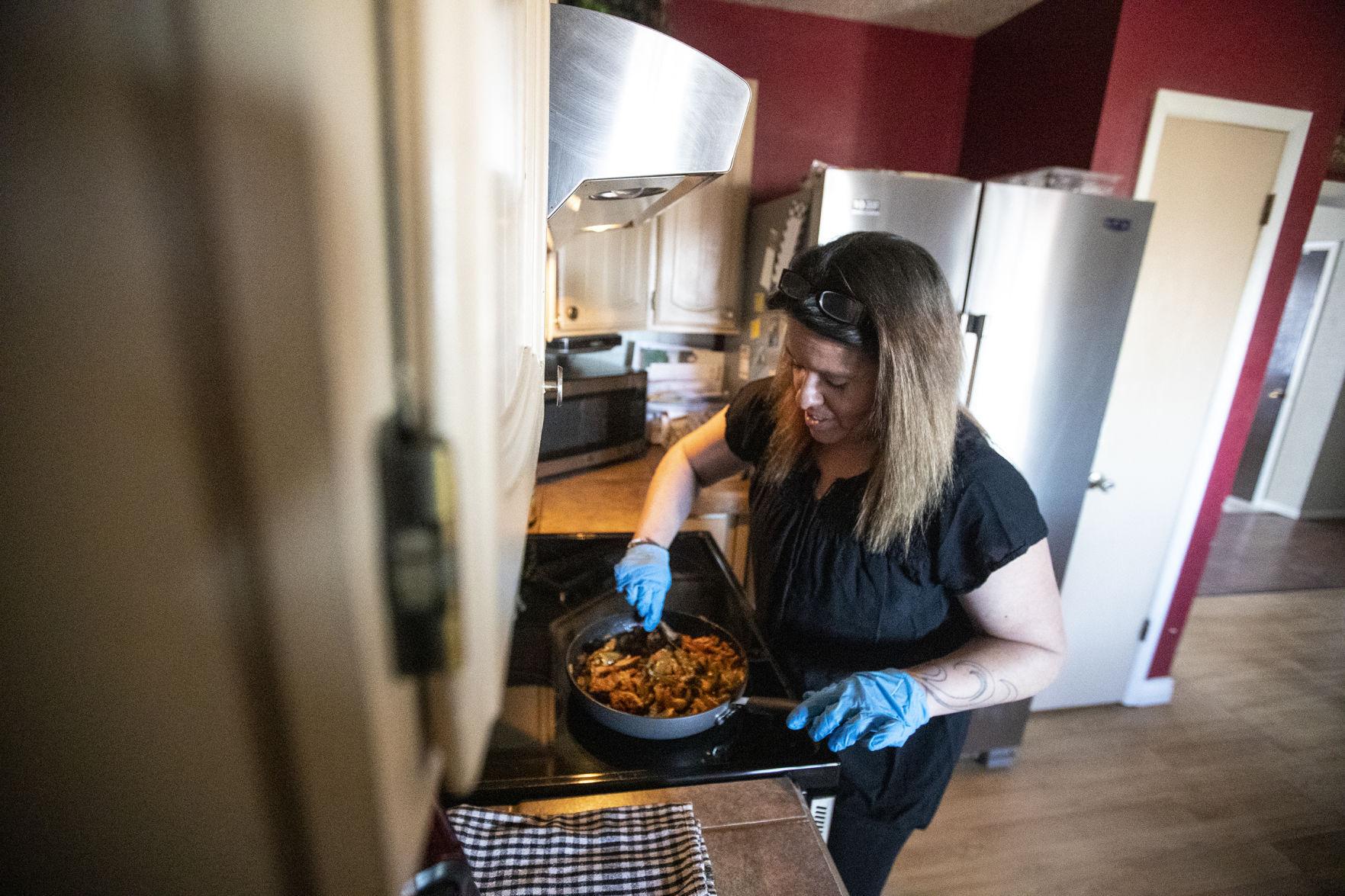 Another local cook who is taking a shot on YouFeed is Stormi Santiago. She and her partner, Kyle Child, are operating Stormi’s Edge Curbside in Gillette, through the app.

Her specialty is crepes, which she learned to make from her Austrian grandmother’s recipe.

About a month into starting her kitchen, Santiago is still tweaking her menu with different crepe recipes. There are breakfast crepes, dessert crepes and other dishes that are more savory and a bit more hardy.

“It’s passion, so it doesn’t feel like work,” she said. 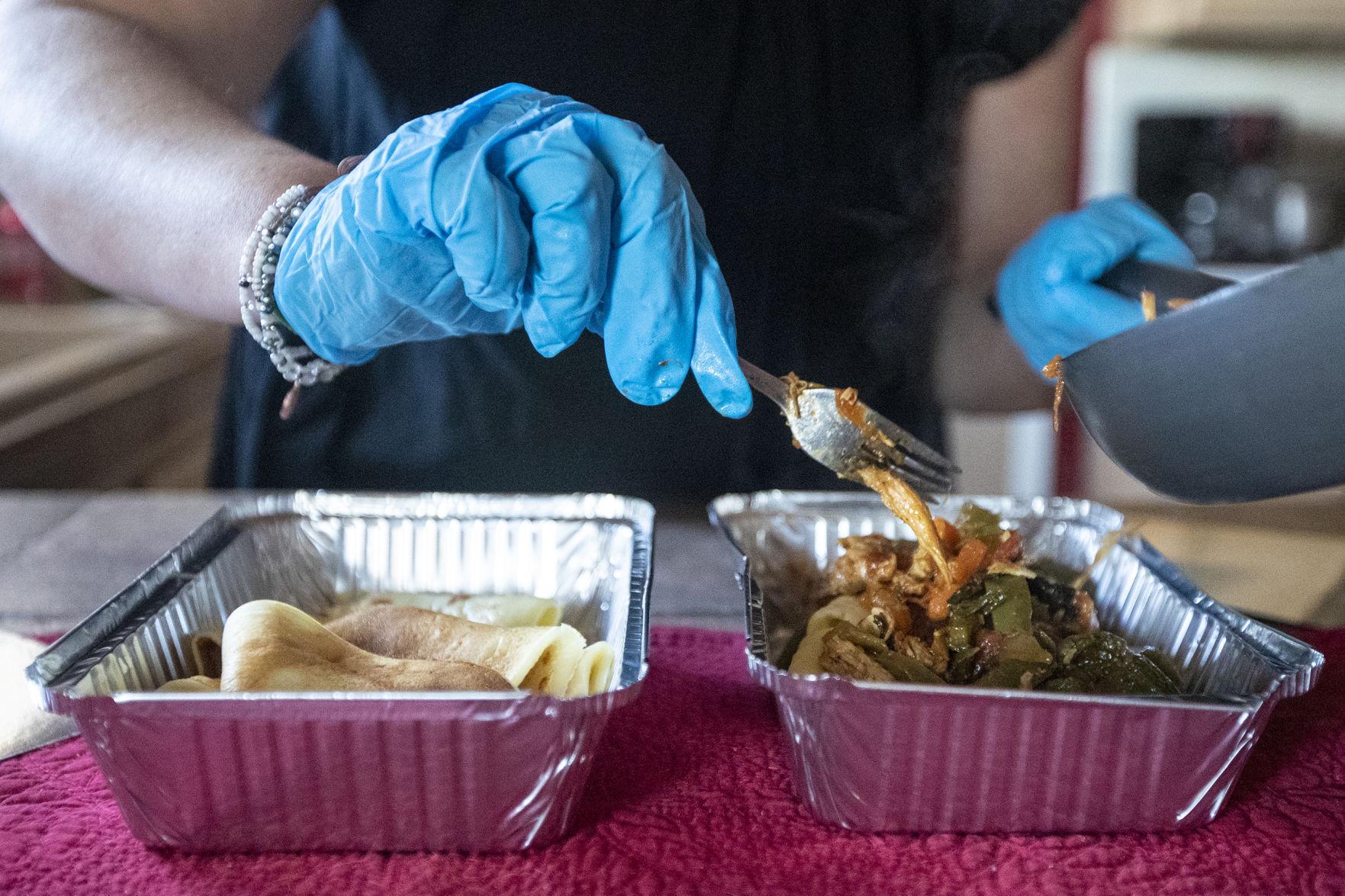 Stormi Santiago prepares a crepes dish which she learned to make from her Austrian grandmother’s recipe March 4.

And after the couple’s difficulties this past year, the work is welcome.

Where Santiago and Child are now is a far cry from where their lives were before the pandemic began. Last spring, they were living in Colorado Springs. But after losing jobs and experiencing homelessness, they eventually found themselves in Gillette, getting back on their feet.

Now, they are running Stormi’s Edge Curbside out of her mom’s house, where they are living.

Maybe it will eventually become some culinary equivalent akin to Apple starting in Steve Jobs’ garage, but their goals for now are much more modest. They want a place to call their own, where they can live, operate and self-sustain their business.

Given the newness of the app and the uniqueness of each chef’s menu and operating hours, the volume of orders each needs to make a living, or at least worth their time, varies greatly.

Mehrzad said getting somewhere in the ballpark of 10 to 20 orders each day would be a sustainable, profitable number for many of the chefs. 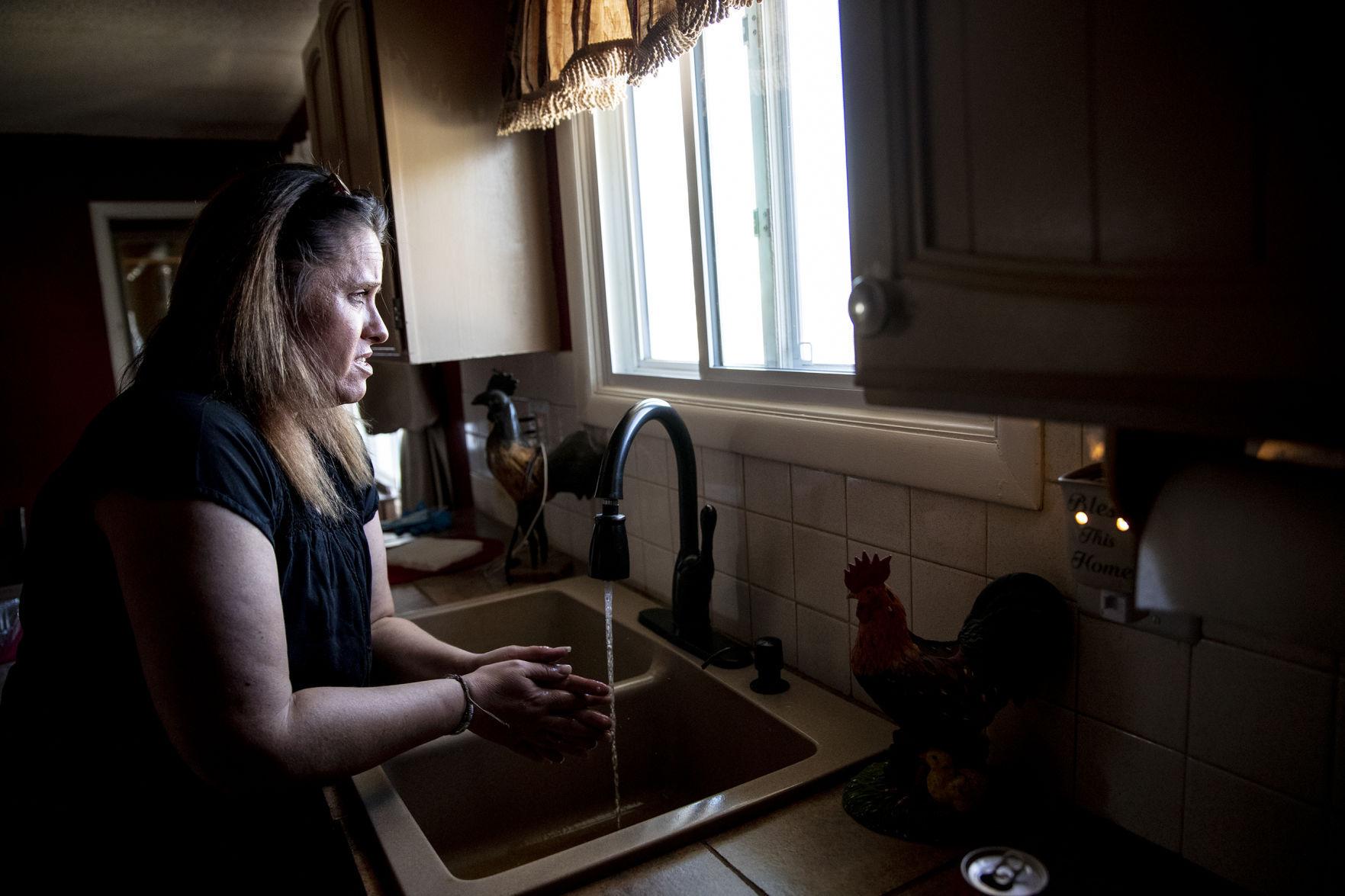 “But to gain traction in starting something always takes time, and we have to be patient,” he said. “It will take a few months. If it takes sooner than that, great.”

In recent days, Hartsoch, who runs her kitchen named Kasi’s, said she has had about three orders a day, which she expects to continue to increase.

Even though the app is still new to Gillette, and the local cooks who are taking a chance on it, Hartsoch said a camaraderie of sorts has already formed among them.

“There’s a brotherhood there that I think you really have to consider and think about,” Hartsoch said. “Understanding that customer is not just yours. They may be ordering from Stormi, or someone else, and you have to be at your best for not only yours, but their sake as well.”

The success of both parties, YouFeed and its chefs, is dependent upon one another. 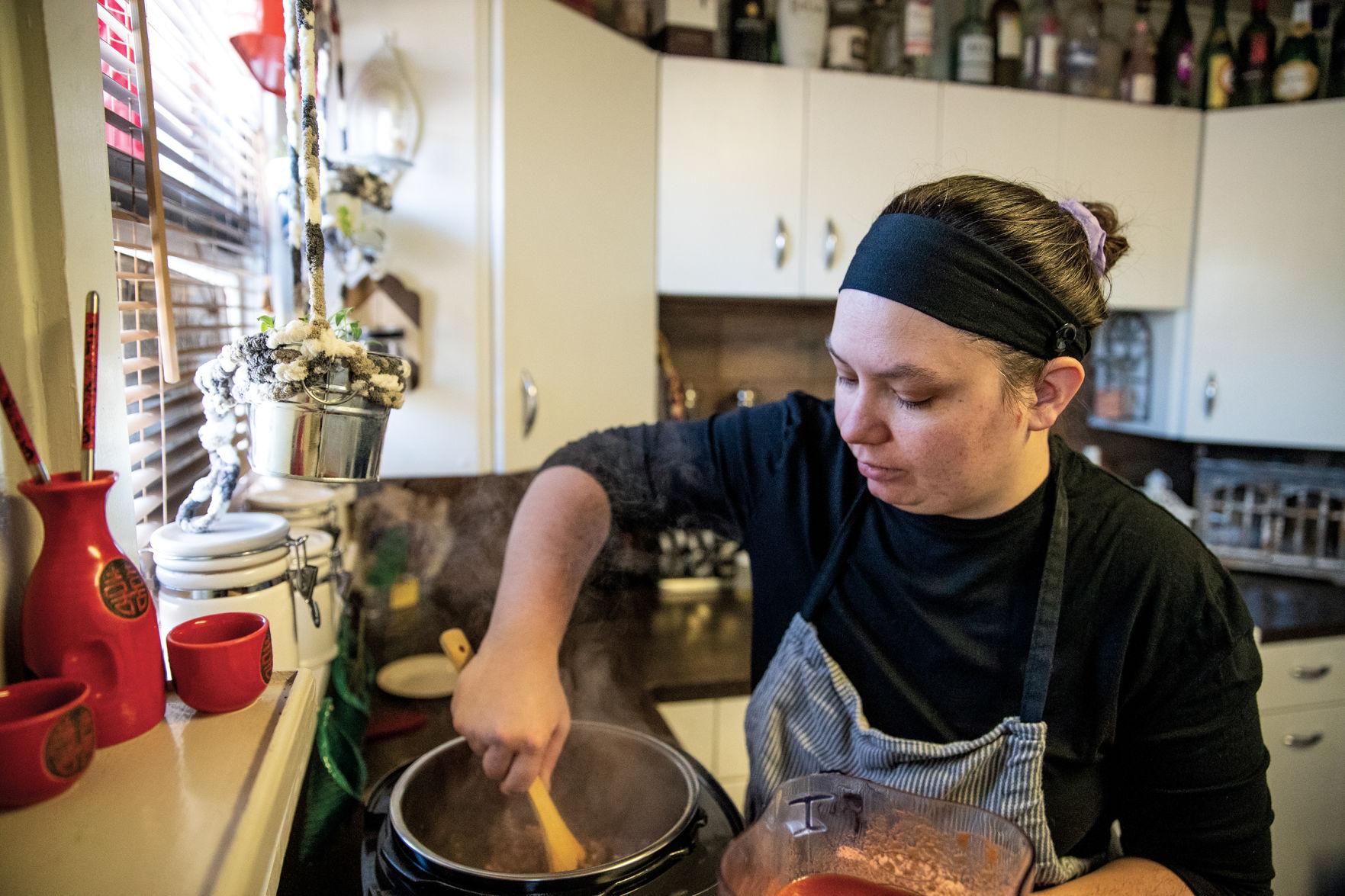 Simply put, the best marketing and technology won’t save the app if the food isn’t good. On the other hand, the app could be full of Michelin-caliber chefs, but if no one knows their kitchens are open, the app has failed them.

Over the next few months, that faith in people, and their faith in the app, will be tested.

As YouFeed progresses through the early stages of its rollout, Santiago and Hartsoch are two of what could potentially become many more home chefs throughout the country, turning to a new app, their home kitchen and tried-and-true recipes to make a living. 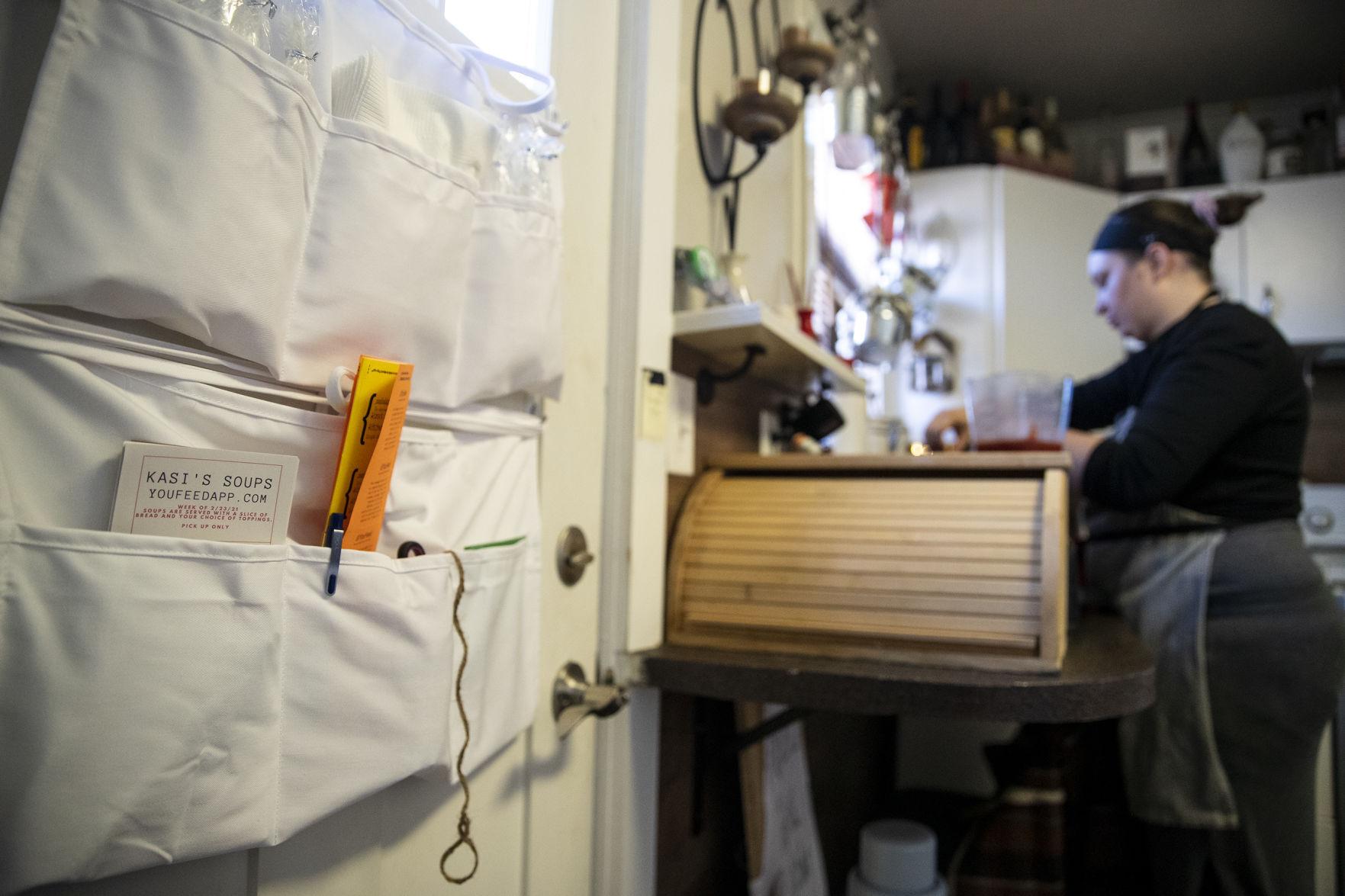 Pamphlets containing information on Kasi’s Home Kitchen hang from the door of her kitchen while she prepares chili for patrons Feb. 24. 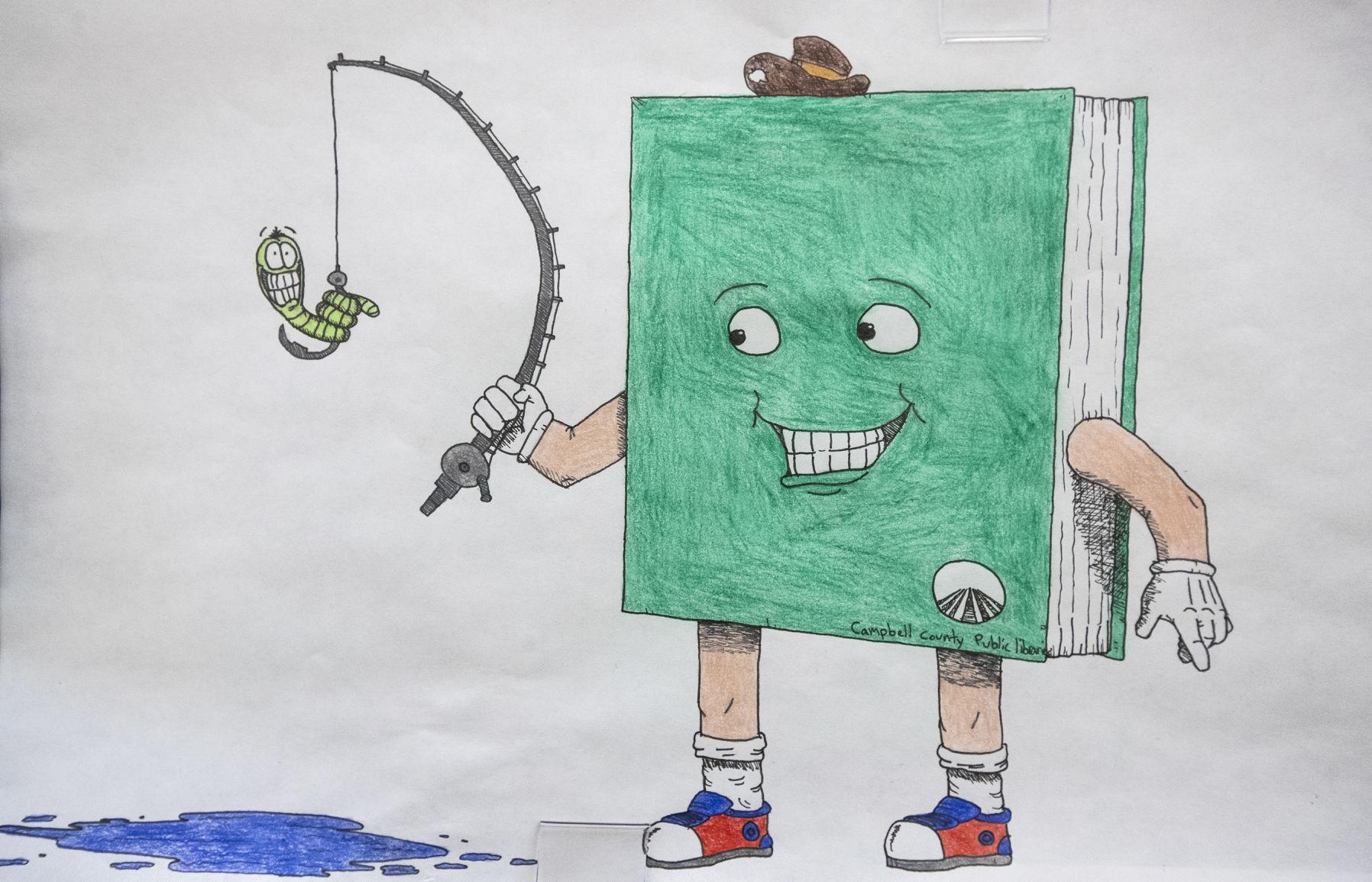 Residents of local long-term care facilities can reconnect with their families and loved ones this week when the Legacy Living and Rehabilitation Center resumes in-person visitation.

After nearly a year of severe restrictions on visitation at the assisted living facility, residents and staff at the Legacy are excited for the change, said Campbell County Health spokesperson Dane Joslyn.

“They are very happy for residents to see their families,” Joslyn said. “They are working to be prudent that all of the infection prevention precautions are in place — mask wearing, distancing, not coming when families are feeling sick.”

The in-person visitation will resume Wednesday and move forward with visitor times from 9-11 a.m. and 1-3 p.m. Monday through Friday.

All visits much be scheduled in advance and visitors will be asked to leave by the end of each time slot. Each visitor will be limited to two visits a week.

The new visitation rules will be discontinued immediately if there are confirmed COVID-19 cases at the Legacy or if the county’s COVID-19 positivity rate exceeds 10%, according to the Campbell County Health press release.

During the in-person visits, the safety guidelines that have become common practice throughout the Campbell County Health network will still be upheld. Visitors will be screened for symptoms before their visits and required to wear personal protective equipment. The equipment will be provided each visit.

Only one visitor at a time will be allowed for in-room visits and all visits are to happen in residents’ rooms. The living room, bistro and other common areas are off limits to visitation, the press release said.

Recent federal recommendations from the Centers for Medicare and Medicaid and the Centers for Disease Control and Prevention recommend a change to long-term care facility visitation guidelines.

The recommendations for “responsible indoor visitation” include visitation for all residents, regardless if they or their visitors have been vaccinated.

However, the federal suggestions made exceptions for communities with a COVID-19 positivity rate greater than 10%, residents with confirmed COVID-19 infections or those actively in quarantine.

The new Legacy visitation rules will allow it to host eight guests at a time in each of its 20-room resident blocks, of which there are eight.

The two-visit per week limit is to ensure that each family and resident can have time for visits while making sure the facility has enough staff in place to accommodate the visits, Joslyn said.

The new guidelines are a significant change from the facility’s heavy restrictions through most of the pandemic. With the change in visitation restrictions, Joslyn said residents are becoming hopeful that it’s a sign of more change to come.

They are hopeful of “being able to continue, being able to maintain having visits and the hope for returning to as much as it was before COVID as possible,” she said.