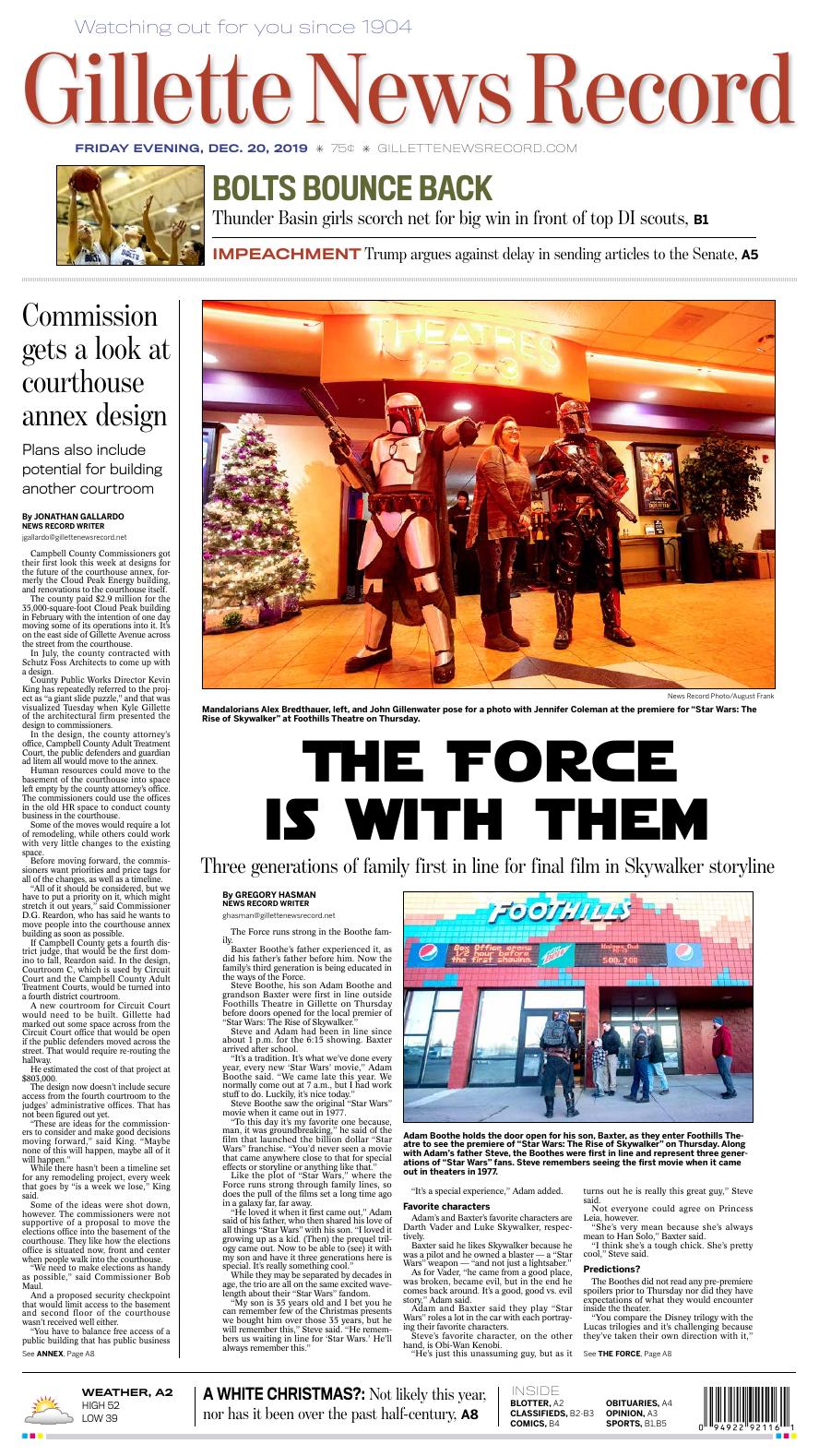 Mandalorians Alex Bredthauer, left, and John Gillenwater pose for a photo with Jennifer Coleman at the premiere for “Star Wars: The Rise of Skywalker” at Foothills Theatre on Thursday.

Several claws hang off of Mandalorian John Gillenwater’s belt at the at the premiere for “Star Wars: The Rise of Skywalker” at Foothills Theatres on Thursday.

Mandalorian's John Gillenwater, left, and Alex Bredthauder pose with Zachary Bredthauer-Reed, dressed as Han Solo at the premiere for "Star Wars: The Rise of Skywalker" at Foothills Theatres on Thursday as Amy and Charley Bredthauer take photos.

John Gillenwater poses in front of the “Star Wars: The Rise of Skywalker” poster at Foothills Theatres on Thursday for his fellow Mandalorian Alex Bredthauer to take a photo.

Mandalorian's John Gillenwater, left and Alex Bredthauder stand guard outside the theater for the premiere for "Star Wars: The Rise of Skywalker" at Foothills Theatres on Thursday.

Adam Boothe holds the door open for his son, Baxter, as they enter Foothills Theatre to see the premiere of “Star Wars: The Rise of Skywalker” on Thursday. Along with Adam’s father Steve, the Boothes were first in line and represent three generations of “Star Wars” fans. Steve remembers seeing the first movie when it came out in theaters in 1977.

The Force runs strong in the Boothe family.

Baxter Boothe’s father experienced it, as did his father’s father before him. Now the family’s third generation is being educated in the ways of the Force.

Steve Boothe, his son Adam Boothe and grandson Baxter were first in line outside Foothills Theatre in Gillette on Thursday before doors opened for the local premier of “Star Wars: The Rise of Skywalker.”

Steve and Adam had been in line since about 1 p.m. for the 6:15 showing. Baxter arrived after school.

“It’s a tradition. It’s what we’ve done every year, every new ‘Star Wars’ movie,” Adam Boothe said. “We came late this year. We normally come out at 7 a.m., but I had work stuff to do. Luckily, it’s nice today.”

Steve Boothe saw the original “Star Wars” movie when it came out in 1977.

“To this day it’s my favorite one because, man, it was groundbreaking,” he said of the film that launched the billion dollar “Star Wars” franchise. “You’d never seen a movie that came anywhere close to that for special effects or storyline or anything like that.”

Like the plot of “Star Wars,” where the Force runs strong through family lines, so does the pull of the films set a long time ago in a galaxy far, far away.

“He loved it when it first came out,” Adam said of his father, who then shared his love of all things “Star Wars” with his son. “I loved it growing up as a kid. (Then) the prequel trilogy came out. Now to be able to (see) it with my son and have it three generations here is special. It’s really something cool.”

While they may be separated by decades in age, the trio are all on the same excited wavelength about their “Star Wars” fandom.

“My son is 35 years old and I bet you he can remember few of the Christmas presents we bought him over those 35 years, but he will remember this,” Steve said. “He remembers us waiting in line for ‘Star Wars.’ He’ll always remember this.”

Baxter said he likes Skywalker because he was a pilot and he owned a blaster — a “Star Wars” weapon — “and not just a lightsaber.”

As for Vader, “he came from a good place, was broken, became evil, but in the end he comes back around. It’s a good, good vs. evil story,” Adam said.

Adam and Baxter said they play “Star Wars” roles a lot in the car with each portraying their favorite characters.

Steve’s favorite character, on the other hand, is Obi-Wan Kenobi.

“He’s just this unassuming guy, but as it turns out he is really this great guy,” Steve said.

Not everyone could agree on Princess Leia, however.

The Boothes did not read any pre-premiere spoilers prior to Thursday nor did they have expectations of what they would encounter inside the theater.

“You compare the Disney trilogy with the Lucas trilogies and it’s challenging because they’ve taken their own direction with it,” Adam Boothe said about the final trilogy produced by Disney. “You just go into it open-minded and hope for the best.”

“We are here for the fans,” Bredthauer said. “We love the movies, we love Mandalorian culture.”

Gillenwater said he saw the first “Star Wars” at a drive-in theater.

“I grew up with it for sure,” he said about how the films have affected pop culture over the years.

As for “Star Wars: The Rise of Skywalker,” theater general manager Rod Schaefer saw an early screening, but did not divulge any spoilers.

Is this the end?

“The Rise of Skywalker” is reportedly to be the last movie in the Skywalker series, but do fans believe it?

They might make spinoffs and other movies set in the “Star Wars” universe, Steve Boothe said. The franchise is just worth too much money for Disney to not keep it going.

“They say it’s going to be the last one, so we’ll see,” Gillenwater said.

Campbell County Commissioners got their first look this week at designs for the future of the courthouse annex, formerly the Cloud Peak Energy building, and renovations to the courthouse itself.

The county paid $2.9 million for the 35,000-square-foot Cloud Peak building in February with the intention of one day moving some of its operations into it. It’s on the east side of Gillette Avenue across the street from the courthouse.

In July, the county contracted with Schutz Foss Architects to come up with a design.

County Public Works Director Kevin King has repeatedly referred to the project as “a giant slide puzzle,” and that was visualized Tuesday when Kyle Gillette of the architectural firm presented the design to commissioners.

In the design, the county attorney’s office, Campbell County Adult Treatment Court, the public defenders and guardian ad litem all would move to the annex.

Human resources could move to the basement of the courthouse into space left empty by the county attorney’s office. The commissioners could use the offices in the old HR space to conduct county business in the courthouse.

Some of the moves would require a lot of remodeling, while others could work with very little changes to the existing space.

Before moving forward, the commissioners want priorities and price tags for all of the changes, as well as a timeline.

“All of it should be considered, but we have to put a priority on it, which might stretch it out years,” said Commissioner D.G. Reardon, who has said he wants to move people into the courthouse annex building as soon as possible.

A new courtroom for Circuit Court would need to be built. Gillette had marked out some space across from the Circuit Court office that would be open if the public defenders moved across the street. That would require re-routing the hallway.

The design now doesn’t include secure access from the fourth courtroom to the judges’ administrative offices. That has not been figured out yet.

“These are ideas for the commissioners to consider and make good decisions moving forward,” said King. “Maybe none of this will happen, maybe all of it will happen.”

While there hasn’t been a timeline set for any remodeling project, every week that goes by “is a week we lose,” King said.

“We need to make elections as handy as possible,” said Commissioner Bob Maul.

And a proposed security checkpoint that would limit access to the basement and second floor of the courthouse wasn’t received well either.

“You have to balance free access of a public building that has public business versus security concerns,” said county administrative director Carol Seeger.

Every day, people go to the second floor of the courthouse, often to make child support payments or do other things, she said. The county wants people to do this, so it shouldn’t make it harder for them to get it done.

King reminded the commissioners to not get too hung up on this part of the design. The county had asked Gillette to find a logical place to put a security checkpoint at a relatively low cost.

“This wasn’t an exhaustive security study,” King said. “Securing the courthouse is a whole other project.”

If the county attorney’s office moves to the annex, the attorneys are going to have to make a lot of trips across the street to get from their offices to the courtrooms.

County engineer Clark Melinkovich said that when he talked with the county attorney’s office and the public defender’s office, both were concerned about this issue, especially during the winter.

The design included a bridge between the two buildings, which would increase safety and efficiency, Gillette said.

County Deputy Attorney Jenny Staeben said she makes between six and nine trips a day from her office to the courtrooms, and she’s not a full-time prosecutor anymore.

“We have to carry all of our own electronics,” she said.

The bridge, which would be transparent and enclosed, would make the trips easier for the attorneys.

It’s estimated to cost $1.2 million to $1.4 million, and would have a 13-foot, 6-inch clearance. While the bridge might be high on the attorneys’ priority list, it’s on the lower end for commissioners, Reardon said. 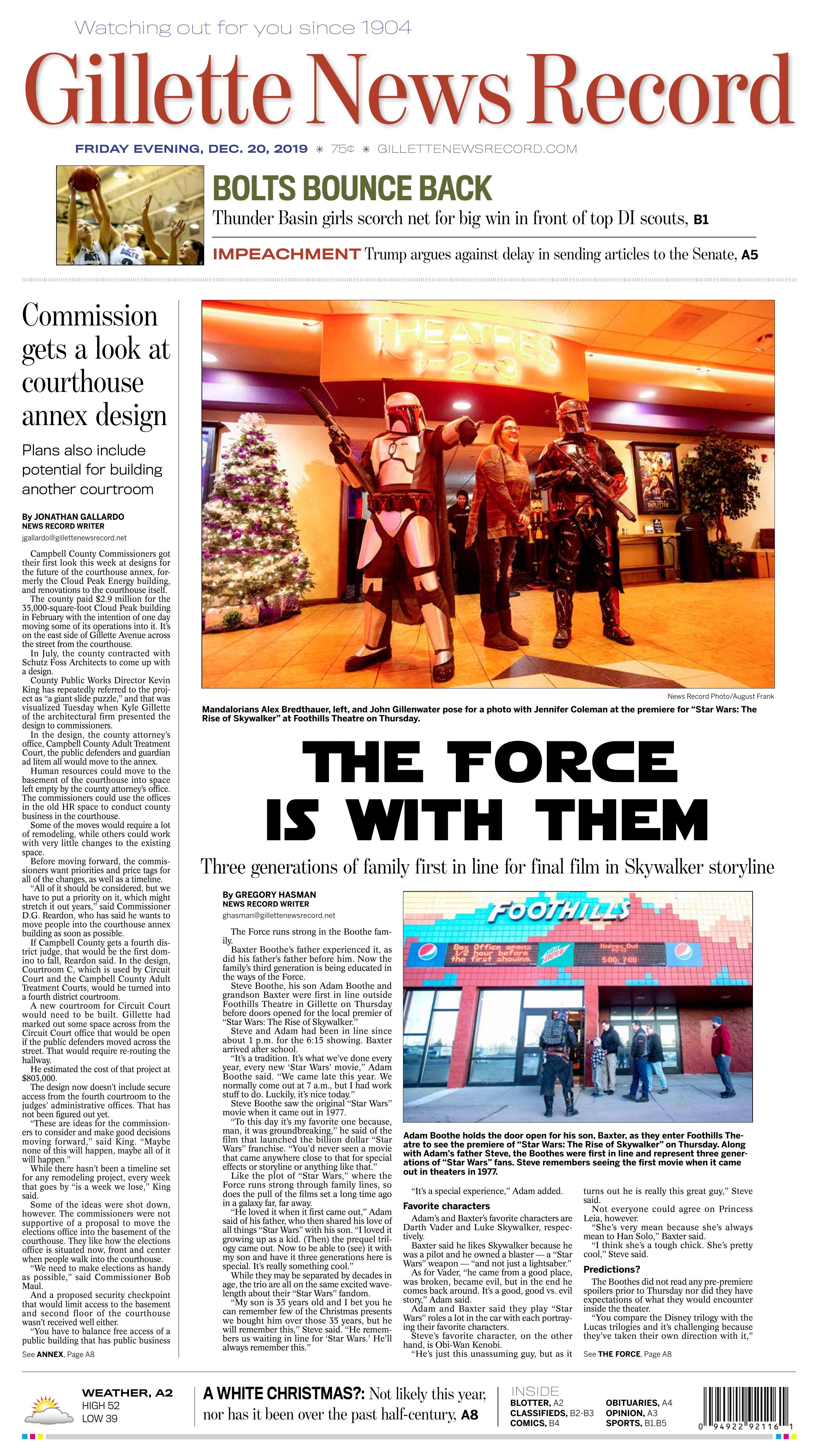