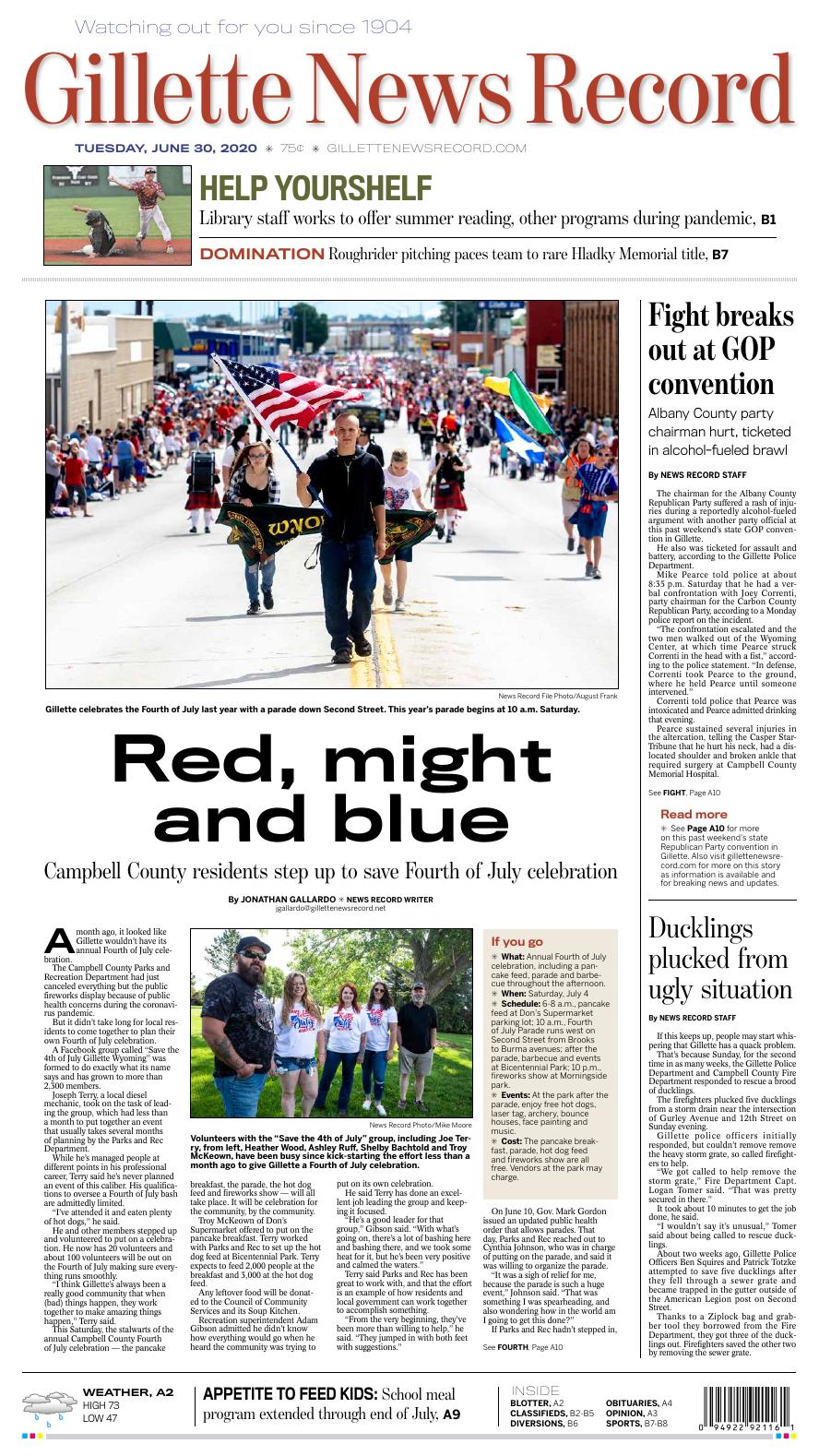 Volunteers with the “Save the 4th of July” group, including Joe Terry, from left, Heather Wood, Ashley Ruff, Shelby Bachtold and Troy McKeown, have been busy since kick-starting the effort less than a month ago to give Gillette a Fourth of July celebration.

Vivienne Chapman, then 4, serves herself a hotdog during the annual Fourth of July celebration in 2016 at Bicentennial Park.

Gillette celebrates the Fourth of July last year with a parade down Second Street. This year’s parade begins at 10 a.m. Saturday.

Fireworks fill the skies above Morningside Park at Cam-plex for the Gillette Fourth of July fireworks show, which because of fire danger delays was held July 12 last year.

A month ago, it looked like Gillette wouldn’t have its annual Fourth of July celebration.

The Campbell County Parks and Recreation Department had just canceled everything but the public fireworks display because of public health concerns during the coronavirus pandemic.

But it didn’t take long for local residents to come together to plan their own Fourth of July celebration.

A Facebook group called “Save the 4th of July Gillette Wyoming” was formed to do exactly what its name says and has grown to more than 2,300 members.

Joseph Terry, a local diesel mechanic, took on the task of leading the group, which had less than a month to put together an event that usually takes several months of planning by the Parks and Rec Department.

While he’s managed people at different points in his professional career, Terry said he’s never planned an event of this caliber. His qualifications to oversee a Fourth of July bash are admittedly limited.

“I’ve attended it and eaten plenty of hot dogs,” he said.

He and other members stepped up and volunteered to put on a celebration. He now has 20 volunteers and about 100 volunteers will be out on the Fourth of July making sure everything runs smoothly.

“I think Gillette’s always been a really good community that when (bad) things happen, they work together to make amazing things happen,” Terry said.

This Saturday, the stalwarts of the annual Campbell County Fourth of July celebration — the pancake breakfast, the parade, the hot dog feed and fireworks show — will all take place. It will be celebration for the community, by the community.

Troy McKeown of Don’s Supermarket offered to put on the pancake breakfast. Terry worked with Parks and Rec to set up the hot dog feed at Bicentennial Park. Terry expects to feed 2,000 people at the breakfast and 3,000 at the hot dog feed.

Any leftover food will be donated to the Council of Community Services and its Soup Kitchen.

Recreation superintendent Adam Gibson admitted he didn’t know how everything would go when he heard the community was trying to put on its own celebration.

He said Terry has done an excellent job leading the group and keeping it focused.

“He’s a good leader for that group,” Gibson said. “With what’s going on, there’s a lot of bashing here and bashing there, and we took some heat for it, but he’s been very positive and calmed the waters.”

Terry said Parks and Rec has been great to work with, and that the effort is an example of how residents and local government can work together to accomplish something.

“From the very beginning, they’ve been more than willing to help,” he said. “They jumped in with both feet with suggestions.”

On June 10, Gov. Mark Gordon issued an updated public health order that allows parades. That day, Parks and Rec reached out to Cynthia Johnson, who was in charge of putting on the parade, and said it was willing to organize the parade.

“It was a sigh of relief for me, because the parade is such a huge event,” Johnson said. “That was something I was spearheading, and also wondering how in the world am I going to get this done?”

If Parks and Rec hadn’t stepped in, she said she still would have been able to put on a good parade. But she’s more than happy to have them take the lead.

“I was relieved that they did take it back over, but they didn’t push us out of the way,” she said. “They asked us for input on different things, asked for help with gathering more volunteers.”

“I was excited about it,” Terry added. “They have so much experience with (the parade), and allowing us to be involved with them has been just great.”

Terry worked with Campbell County Public Health to write a variance for the hot dog feed, which was approved by the state.

“Save the 4th of July” has received praise from Parks and Rec and Campbell County commissioners for going about things the right way.

“There’s so many unknowns, so many things going on, so many of us don’t like the things that are happening but they’re happening anyway. So I appreciate you guys doing the work,” said Commissioner Rusty Bell at a recent commission meeting.

“I think (Terry’s) leadership and him being able to work with us and pick our brains, I think that really helped,” Gibson said.

Shelby Bachtold, the group’s treasurer, was in charge of raising money for the event. The group so far has raised more than $10,000, and that’s not including $3,000 from the county to pay for food.

“I happened to post an idea of how to raise funds,” she said on how she became involved. “And then all of a sudden, I was invited to a private group chat and it just kind of took off.”

Bachtold, a stay-at-home mom, had never organized a fundraiser before, much less one to this extent.

“I didn’t know what I was getting into,” she said.

She’s put on a bake sale, a couple of car washes and other events, and she’s asked businesses if they’d be willing to help in any way they can.

Bachtold said she felt for the kids of the community who had to miss out on so many things because of the pandemic. She didn’t like them idea of the missing out on the Fourth of July too.

“I felt horrible, like they were being robbed of another thing,” she said.

She imagined what it would’ve been like if she were in their shoes.

Terry and the group aren’t stopping once the last firework goes off on Saturday. They’re just getting started.

The group is in the process of becoming a nonprofit organization. Any money that is left over from this year’s event will go into an account and help pay for next year’s celebration.

“When it’s done, we’d like to work with Parks and Rec next year,” he said. “As citizens and community members, we’d like to be more involved in what’s going on.”

The volunteers are looking forward to when the parade rolls down Second Street on Saturday.

“It’s going to be a little different,” Bachtold said. “Knowing I was part of such a huge event, to see everybody ... I’m getting goosebumps just talking about it. To know that I did good for somebody, for the whole town, that feeling is more the reward than anything.”

“Literally, just to put a smile on somebody’s face is reason enough for me,” Johnson said.

With everything that’s going on in the country, Johnson said Gillette needs a celebration so residents can “still see the beauty in our community.”

“I think it’s going to be one of the best Fourth of Julys ever,” she said.

What: Annual Fourth of July celebration, including a pancake feed, parade and barbecue and games throughout the afternoon.

Cost: The pancake breakfast, parade, hot dog feed and fireworks show are all free. Vendors at the park may charge. 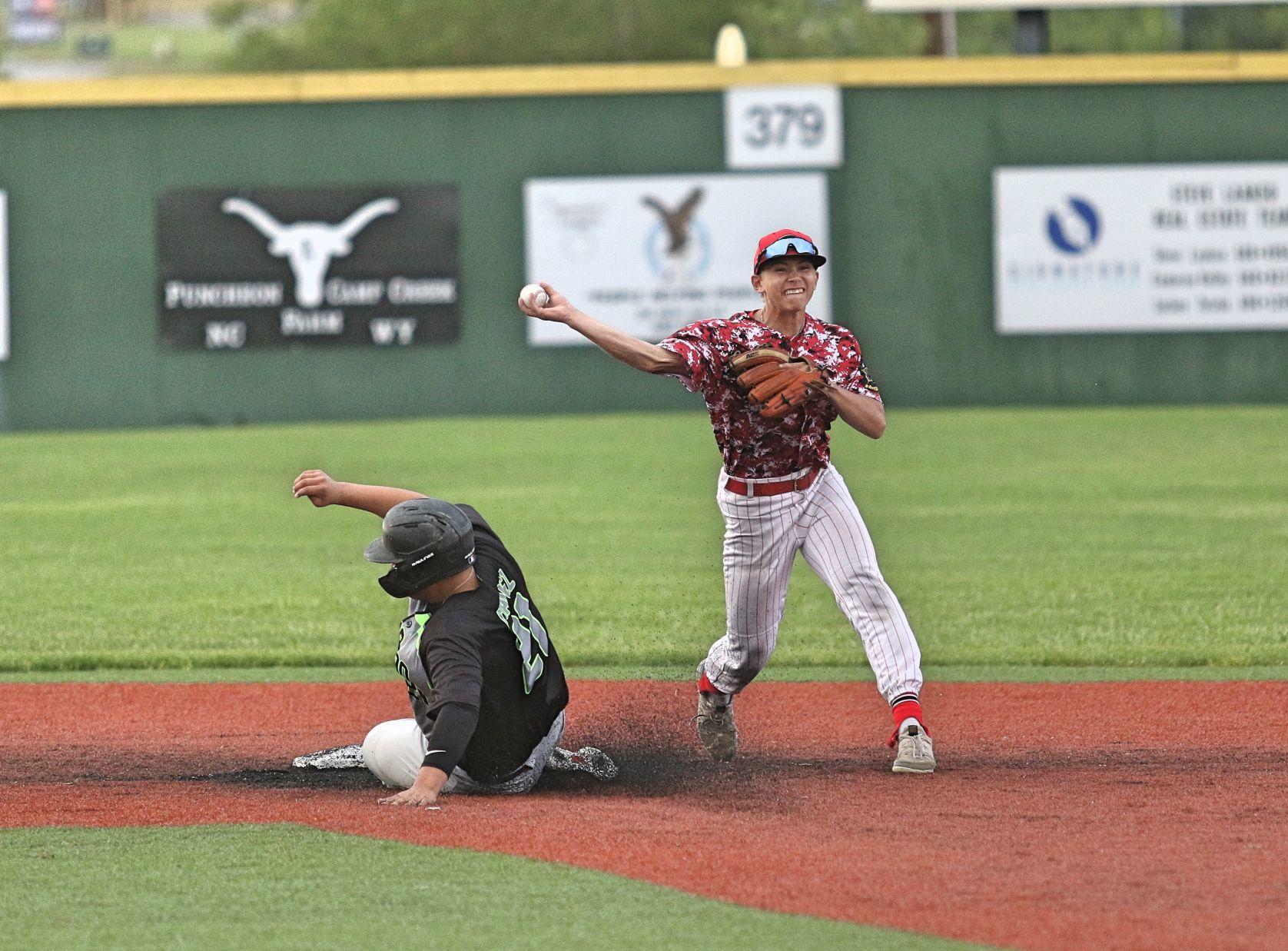 Zach Brown fires a throw to first base Sunday evening during the championship game of the Hladky Memorial Tournament. Gillette beat the Colorado Ducks (Denver) 7-5 on its home field

The chairman for the Albany County Republican Party suffered a rash of injuries during a reportedly alcohol-fueled argument with another party official at this past weekend’s state GOP convention in Gillette.

He also was ticketed for assault and battery, according to the Gillette Police Department.

Mike Pearce told police at about 8:35 p.m. Saturday that he had a verbal confrontation with Joey Correnti, party chairman for the Carbon County Republican Party, according to a Monday police report on the incident.

“The confrontation escalated and the two men walked out of the Wyoming Center, at which time Pearce struck Correnti in the head with a fist,” according to the police statement. “In defense, Correnti took Pearce to the ground, where he held Pearce until someone intervened.”

Correnti told police that Pearce was intoxicated and Pearce admitted drinking that evening.

Pearce sustained several injuries in the altercation, telling the Casper Star-Tribune that he hurt his neck, had a dislocated shoulder and broken ankle that required surgery at Campbell County Memorial Hospital.

Pearce was ticketed based on witness accounts of the fight, police report.

“Witness statements confirm Pearce was responsible for the escalation and Correnti was defending himself by taking Pearce to the ground,” the statement says.

Pearce told the Star-Tribune that he tried to clear the air with Correnti in a conversation that quickly led to the fight. Pearce said Correnti had approached him earlier in the weekend about Pearce being too friendly with Correnti’s political rivals.

He added he does not remember who threw the first punch, but the result was him lying unconscious on the floor.

Campbell County Chairman Vicki Kissack did not respond to calls for comment by press time.

If this keeps up, people may start whispering that Gillette has a quack problem.

That’s because Sunday, for the second time in as many weeks, the Gillette Police Department and Campbell County Fire Department responded to rescue a brood of ducklings.

The firefighters plucked five ducklings from a storm drain near the intersection of Gurley Avenue and 12th Street on Sunday evening.

“We got called to help remove the storm grate,” Fire Department Capt. Logan Tomer said. “That was pretty secured in there.”

It took about 10 minutes to get the job done, he said.

“I wouldn’t say it’s unusual,” Tomer said about being called to rescue ducklings.

About two weeks ago, Gillette Police Officers Ben Squires and Patrick Totzke attempted to save five ducklings after they fell through a sewer grate and became trapped in the gutter outside of the American Legion post on Second Street.

Thanks to a Ziplock bag and grabber tool they borrowed from the Fire Department, they got three of the ducklings out. Firefighters saved the other two by removing the sewer grate. 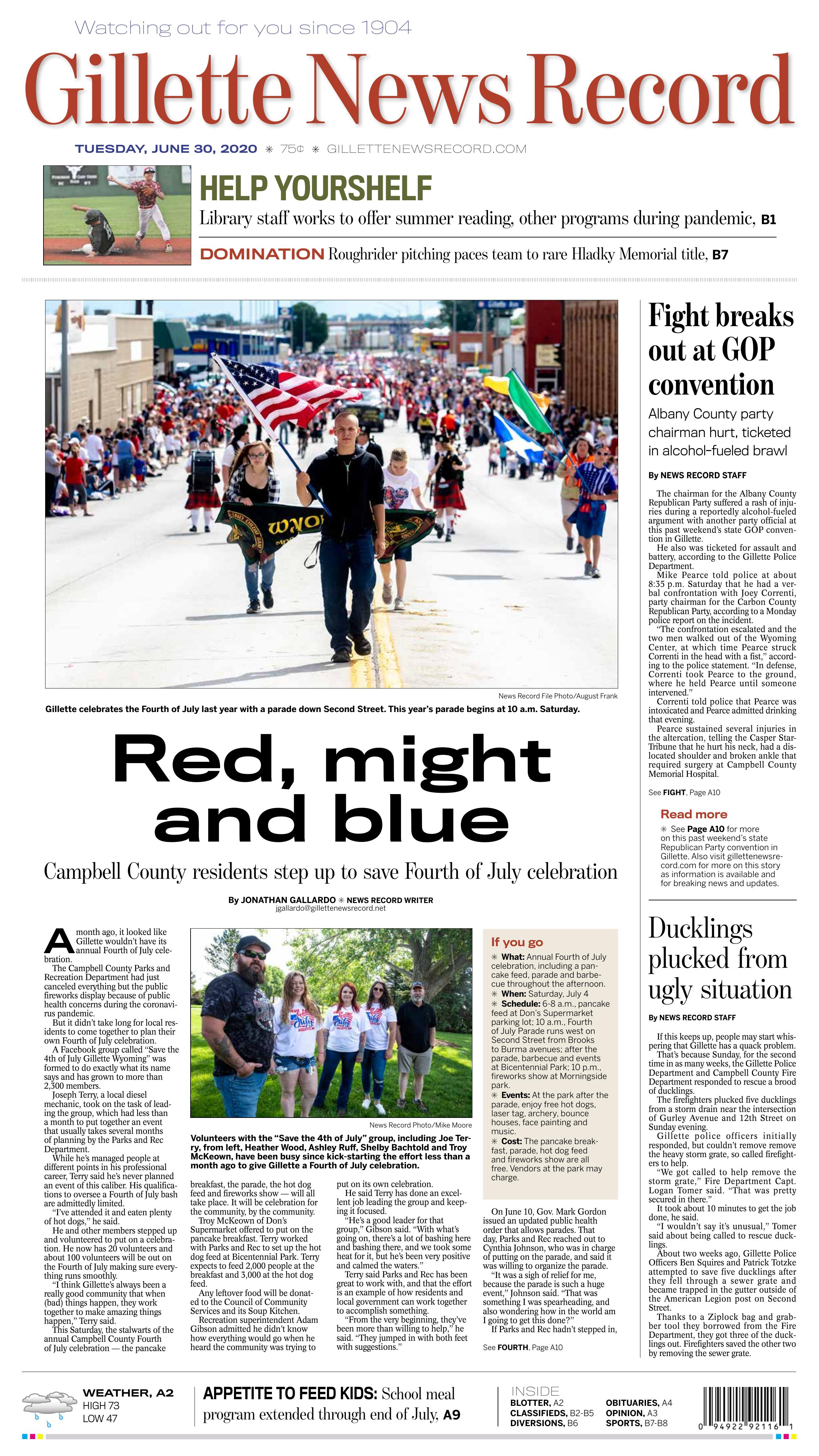