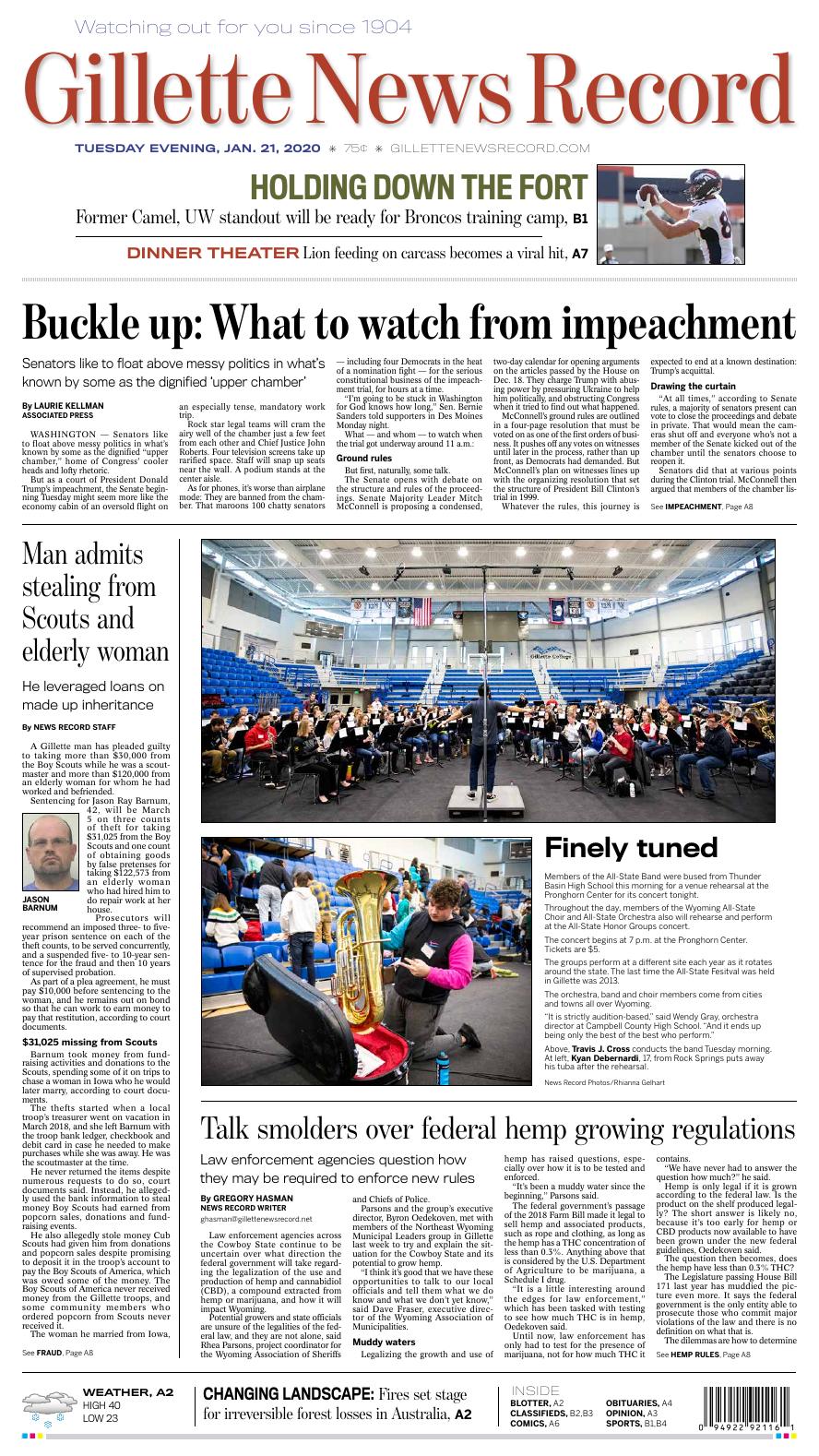 Law enforcement agencies across the Cowboy State continue to be uncertain over what direction the federal government will take regarding the legalization of the use and production of hemp and cannabidiol (CBD), a compound extracted from hemp or marijuana, and how it will impact Wyoming.

Potential growers and state officials are unsure of the legalities of the federal law, and they are not alone, said Rhea Parsons, project coordinator for the Wyoming Association of Sheriffs and Chiefs of Police.

Parsons and the group’s executive director, Byron Oedekoven, met with members of the Northeast Wyoming Municipal Leaders group in Gillette last week to try and explain the situation for the Cowboy State and its potential to grow hemp.

“I think it’s good that we have these opportunities to talk to our local officials and tell them what we do know and what we don’t yet know,” said Dave Fraser, executive director of the Wyoming Association of Municipalities.

Legalizing the growth and use of hemp has raised questions, especially over how it is to be tested and enforced.

“It’s been a muddy water since the beginning,” Parsons said.

The federal government’s passage of the 2018 Farm Bill made it legal to sell hemp and associated products, such as rope and clothing, as long as the hemp has a THC concentration of less than 0.3%. Anything above that is considered by the U.S. Department of Agriculture to be marijuana, a Schedule I drug.

“It is a little interesting around the edges for law enforcement,” which has been tasked with testing to see how much THC is in hemp, Oedekoven said.

Until now, law enforcement has only had to test for the presence of marijuana, not for how much THC it contains.

“We have never had to answer the question how much?” he said.

Hemp is only legal if it is grown according to the federal law. Is the product on the shelf produced legally? The short answer is likely no, because it’s too early for hemp or CBD products now available to have been grown under the new federal guidelines, Oedekoven said.

The question then becomes, does the hemp have less than 0.3% THC?

The Legislature passing House Bill 171 last year has muddied the picture even more. It says the federal government is the only entity able to prosecute those who commit major violations of the law and there is no definition on what that is.

The dilemmas are how to determine if a product’s THC level is below 0.3% and how would that be enforced, Oedekoven said. The concern is that while state law says it’s a federal problem, local and state officials fear they will end up having to enforce the new regulations without compensation.

At the 2019 legislative session, Wyoming lawmakers, in accordance with the federal law, set aside money for the implementation of the rules and creation of a laboratory, which the state is now testing equipment for.

“This would allow for immediate implementation of our program while we concurrently take public comment on our rules,” according to a statement from Gov. Mark Gordon’s office.

This past fall, the U.S. Department of Agriculture outlined provisions for state plans regarding the use of hemp. They include containing a process or procedure concerning how hemp is collected and maintained, making sure hemp does not exceed 0.3% THC, ensuring the plants are being effectively disposed of and that compliance is met.

Wyoming had to revise a plan it submitted to the feds last April after the USDA released a regulatory framework six months later. The current draft is in the state Attorney General’s Office. Once it’s reviewed and tweaked, it will go to Gordon. If he gives it the OK, the plan will be sent to the USDA for consideration.

“It is a priority for everyone,” said Derek Grant, Wyoming Department of Agriculture spokesman. “We’re working on it as quickly as we can.”

The USDA won’t review the state plans until it disseminates the rules and “that’s essentially what we’re waiting on,” Parsons said.

“It will be interesting to watch what we get from the federal government,” Fraser said. “Like a lot of issues that are new, it’s going to take some time, I think, to develop all the rules and regulations and promulgate the information so people can understand it. At this point, even the experts don’t even understand all the issues.”

If there are Campbell County residents interested in growing hemp, they should reach out to the Wyoming Hemp Association, “so they are a part of the bigger conversation as to where all the complexities are and how they can work through those,” Parsons said.

As for people looking to buy a CBD product because they feel it may help reduce seizures or alleviate pain, Parsons suggests they do their due diligence first and make sure the product isn’t over the federal threshold of 0.3% THC.

“Our message isn’t that there isn’t any value or promise for CBD. There sounds like there is some real promise associated with it,” she said. “Our goal is to caution people to do their research and make sure that if they are going to consider using it they take their time to investigate that product as well as talk with their physicians.

“We want them to stay within the legal guidelines. What we’re really hoping for is research and time to catch up with this.”

A Gillette man has pleaded guilty to taking more than $30,000 from the Boy Scouts while he was a scoutmaster and more than $120,000 from an elderly woman for whom he had worked and befriended.

Sentencing for Jason Ray Barnum, 42, will be March 5 on three counts of theft for taking $31,025 from the Boy Scouts and one count of obtaining goods by false pretenses for taking $122,573 from an elderly woman who had hired him to do repair work at her house.

Prosecutors will recommend an imposed three- to five-year prison sentence on each of the theft counts, to be served concurrently, and a suspended five- to 10-year sentence for the fraud and then 10 years of supervised probation.

As part of a plea agreement, he must pay $10,000 before sentencing to the woman, and he remains out on bond so that he can work to earn money to pay that restitution, according to court documents.

Barnum took money from fundraising activities and donations to the Scouts, spending some of it on trips to chase a woman in Iowa who he would later marry, according to court documents.

The thefts started when a local troop’s treasurer went on vacation in March 2018, and she left Barnum with the troop bank ledger, checkbook and debit card in case he needed to make purchases while she was away. He was the scoutmaster at the time.

He never returned the items despite numerous requests to do so, court documents said. Instead, he allegedly used the bank information to steal money Boy Scouts had earned from popcorn sales, donations and fundraising events.

The woman he married from Iowa, from whom he is now estranged, reported that Barnum always had money even though he had been unemployed for a few years. When she asked him where he earned the money, he said he “found a way,” according to court documents.

The Boy Scouts fired Barnum in November 2018 after learning he had lied on his application by not disclosing his criminal record and by not revealing that he was on probation for theft by deception in South Dakota.

Barnum confessed to his sister and a friend and told police that he used the money to pay his bills, according to court documents.

“I made some bad choices,” he said.

Each of the theft counts is for money allegedly taken from a different group — a local Boy Scout troop, a local Cub Scout troop and the Boy Scouts of America.

During the Gillette Police Department’s investigation of the alleged thefts, investigators discovered Barnum also had conned a 76-year-old Gillette woman out of $122,573 between July 2017 and May 2018.

In May 2017, the elderly woman hired Barnum to complete several projects around her home. Two months later, he asked to borrow $4,500 to buy a truck, promising to pay it back by October 2017 with an inheritance he was about to receive from his recently deceased aunt.

Over the following 10 months, he requested and received money from the woman on 46 occasions, always promising to pay it back with his forthcoming inheritance, which didn’t exist, according to court documents.

By spring 2018, Barnum’s requests had drained the woman’s bank account, but when he told her he needed to pay South Dakota excise taxes or he would be arrested, she placed the $2,500 balance on her credit card. Barnum then deposited the $2,500 in one of the Boy Scout troop accounts from which he later stole, according to court documents.

When he failed to pay by the promised date, Barnum told the woman that his inheritance had been delayed for 90 days because his relative had contested the will. When the 90 days passed, he claimed a judge had placed a 30-day hold on the will.

He eventually told the woman that he was at a hospital in Rapid City, South Dakota, because his daughter had contracted West Nile virus and that the check was in his Gillette mailbox, which he couldn’t access at that time, an affidavit says.

At the end of December, he reported he was leaving the hospital and would pick up the inheritance check as soon as he returned home, but the woman never heard from Barnum again.

“I misled (her),” her said as he pleaded guilty to the charge. “I told (her) I was getting an inheritance that didn’t exist and I’d be able to repay her. And she kept giving me money based off of that and there was no inheritance that existed from a deceased aunt.” 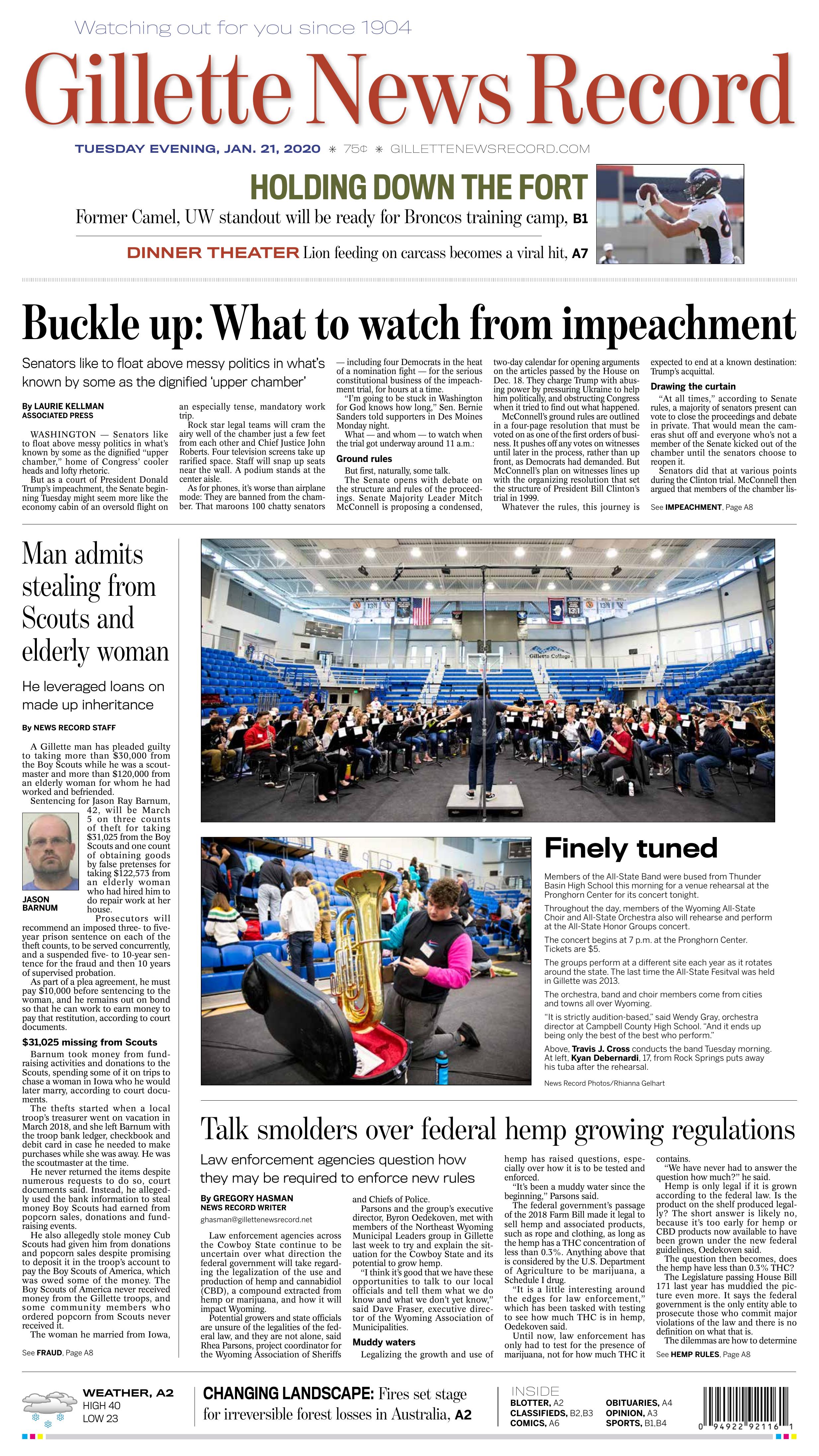