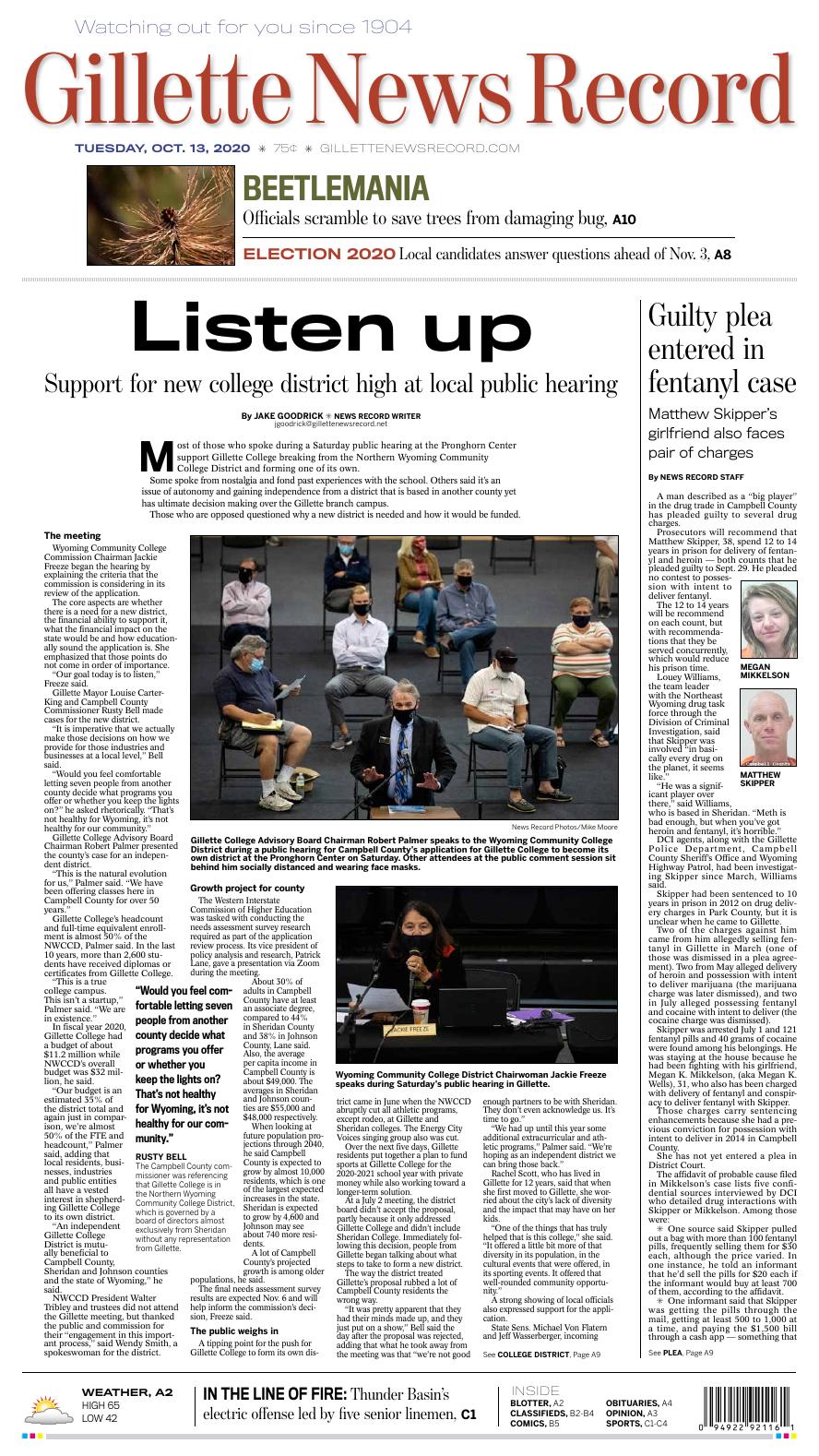 Gillette College Advisory Board Chairman Robert Palmer speaks to the Wyoming Community College District during a public hearing for Campbell County’s application for Gillette College to become its own district at the Pronghorn Center on Saturday. Other attendees at the public comment session sit behind him socially distanced and wearing face masks.

Attendees socially distance across the floor of the Pronghorn Center during a public hearing for Gillette College’s application to become its own district Saturday.

County Commissioner Bob Maul, second from right, and Troy McKeown listen to comments during a public hearing for Gillette College’s application to become its own district at the Pronghorn Center Saturday.

Nello Williams speaks about the benefits of Gillette College becoming its own district during a public hearing at the college Saturday.

Debbie McLeland approaches the podium to share her thoughts on the matter during a public hearing for Gillette College’s application to become its own district at the Pronghorn Center Saturday.

Gillette Mayor Louise Carter-King listens to a presentation during at a public hearing for Campbell County’s application to break Gillette College off to its own community college district at the Pronghorn Center on Saturday.

Most of those who spoke during a Saturday public hearing at the Pronghorn Center support Gillette College breaking from the Northern Wyoming Community College District and forming one of its own.

Some spoke from nostalgia and fond past experiences with the school. Others said it’s an issue of autonomy and gaining independence from a district that is based in another county yet has ultimate decision making over the Gillette branch campus.

Those who are opposed questioned why a new district is needed and how it would be funded.

Wyoming Community College Commission Chairman Jackie Freeze began the hearing by explaining the criteria that the commission is considering in its review of the application. 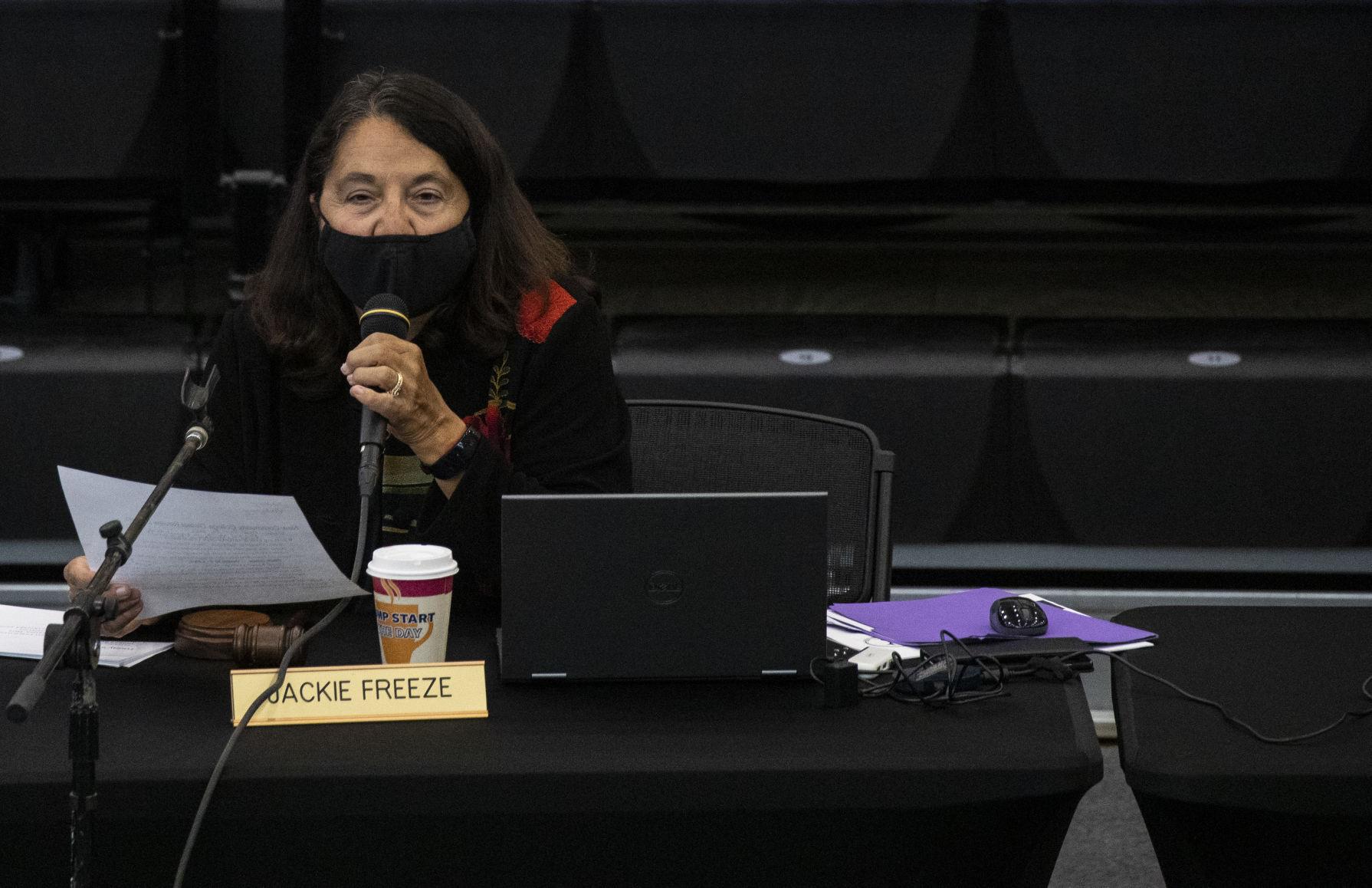 The core aspects are whether there is a need for a new district, the financial ability to support it, what the financial impact on the state would be and how educationally sound the application is. She emphasized that those points do not come in order of importance.

“Our goal today is to listen,” Freeze said.

“It is imperative that we actually make those decisions on how we provide for those industries and businesses at a local level,” Bell said.

“This is the natural evolution for us,” Palmer said. “We have been offering classes here in Campbell County for over 50 years.”

Gillette College’s headcount and full-time equivalent enrollment is almost 50% of the NWCCD, Palmer said. In the last 10 years, more than 2,600 students have received diplomas or certificates from Gillette College.

“This is a true college campus. This isn’t a startup,” Palmer said. “We are in existence.”

In fiscal year 2020, Gillette College had a budget of about $11.2 million while NWCCD’s overall budget was $32 million, he said.

“Our budget is an estimated 35% of the district total and again just in comparison, we’re almost 50% of the FTE and headcount,” Palmer said, adding that local residents, businesses, industries and public entities all have a vested interest in shepherding Gillette College to its own district.

“An independent Gillette College District is mutually beneficial to Campbell County, Sheridan and Johnson counties and the state of Wyoming,” he said.

NWCCD President Walter Tribley and trustees did not attend the Gillette meeting, but thanked the public and commission for their “engagement in this important process,” said Wendy Smith, a spokeswoman for the district.

The Western Interstate Commission of Higher Education was tasked with conducting the needs assessment survey research required as part of the application review process. Its vice president of policy analysis and research, Patrick Lane, gave a presentation via Zoom during the meeting. 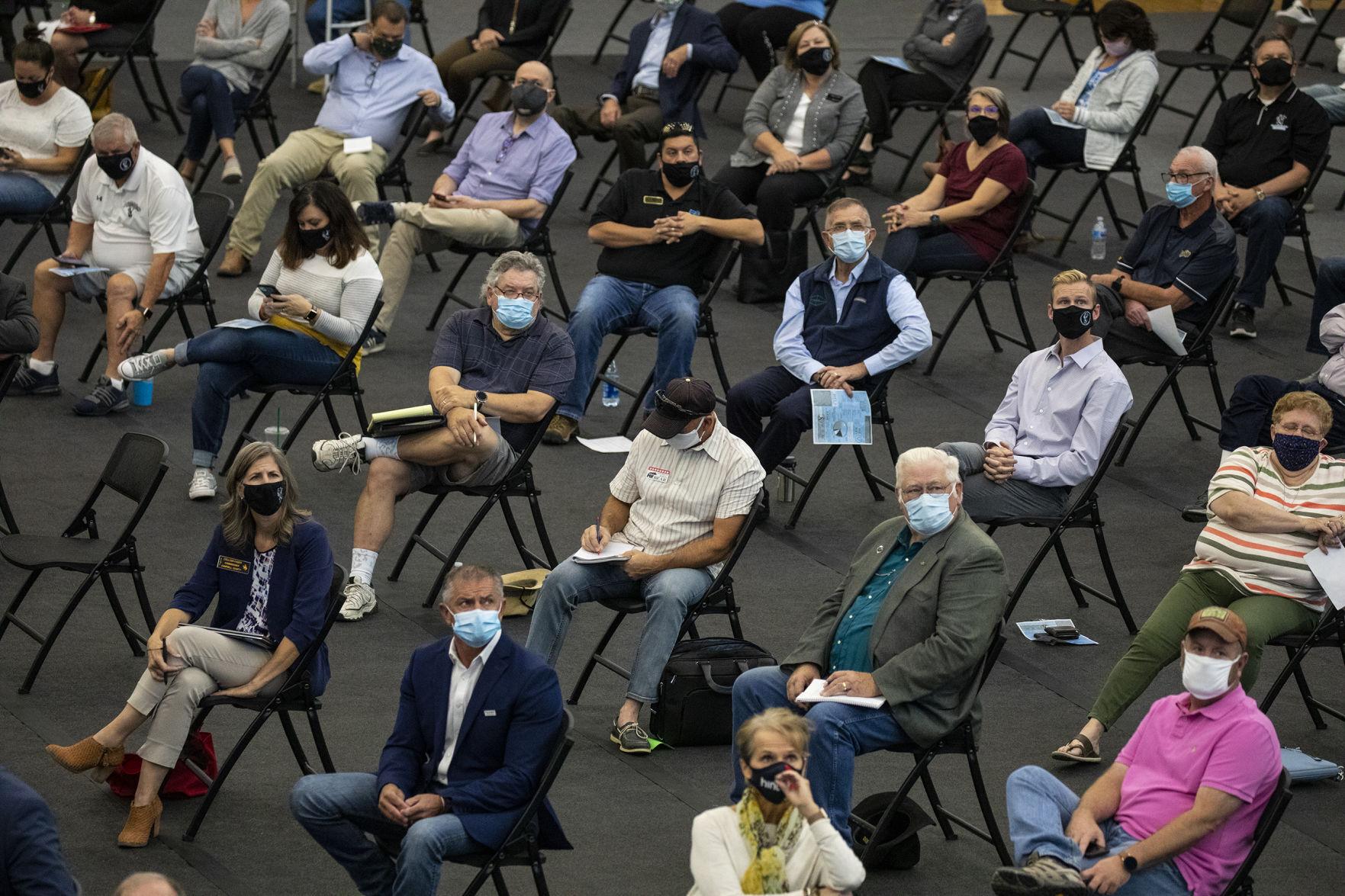 Attendees view a presentation at Saturday’s public hearing for an application to break Gillette College out from the Northern Wyoming Community College District.

A lot of Campbell County’s projected growth is among older populations, he said.

The public weighs in

A tipping point for the push for Gillette College to form its own district came in June when the NWCCD abruptly cut all athletic programs, except rodeo, at Gillette and Sheridan colleges. The Energy City Voices singing group also was cut.

Over the next five days, Gillette residents put together a plan to fund sports at Gillette College for the 2020-2021 school year with private money while also working toward a longer-term solution.

At a July 2 meeting, the district board didn’t accept the proposal, partly because it only addressed Gillette College and didn’t include Sheridan College. Immediately following this decision, people from Gillette began talking about what steps to take to form a new district.

“It was pretty apparent that they had their minds made up, and they just put on a show,” Bell said the day after the proposal was rejected, adding that what he took away from the meeting was that “we’re not good enough partners to be with Sheridan. They don’t even acknowledge us. It’s time to go.”

“We had up until this year some additional extracurricular and athletic programs,” Palmer said. “We’re hoping as an independent district we can bring those back.”

Rachel Scott, who has lived in Gillette for 12 years, said that when she first moved to Gillette, she worried about the city’s lack of diversity and the impact that may have on her kids.

“One of the things that has truly helped that is this college,” she said. “It offered a little bit more of that diversity in its population, in the cultural events that were offered, in its sporting events. It offered that well-rounded community opportunity.”

A strong showing of local officials also expressed support for the application.

“We won’t cut into the pie that is the funding for colleges,” Von Flatern said. “We have an existing college running today, so we know exactly what it costs, and it probably costs about $14 million to run this school. From that point of view, we do know what it costs.”

Of that group, all but Fortner were in support in one form or another of the college forming its own district.

“Your funding from your industry is dying and dying pretty fast,” Fortner said about the struggling Campbell County coal industry. “I don’t think a new district is sustainable without that.

“There’s really no benefit to walking away from something we’ve had for half a century already and has worked pretty well. The only reason we’re here today is because (of) the sports programs. That’s the sticking point.”

Fortner ended his statement by saying that no one he knows supports the formation of a new college because they do not want increased taxes.

“Nobody likes to preach taxes,” said Josh McGrath, a college advisory board member. “It is what it is. Mr. Fortner said nobody would support it. I think by judging this room, we have always supported Gillette College and we’ll figure out a way to make that happen.”

An overwhelming majority of those who spoke at the meeting supported the college forming its own district.

During a recent Eastern Wyoming College special meeting, board trustee John Patrick expressed concern over how Gillette College forming its own district could affect state funding for the other seven community college districts in Wyoming, according to the Torrington Telegram.

David Bowles, a local analytical chemist who graduated from Gillette College, told the story of being laid off in 2005, “unemployed, undereducated” and living in his mom’s basement.

He credited his time at Gillette College with turning his life around.

The next public hearing is Wednesday in Riverton and can be attended virtually through Zoom.

The WCCC will have a special meeting Nov. 20 in Cheyenne to either approve or deny the application. That meeting will be open to the public, Freeze said.

If approved, the application will move to the state Legislature. If the Legislature also moves forward with the application, a special vote will be held in Campbell County to decide whether to approve the new community college district. 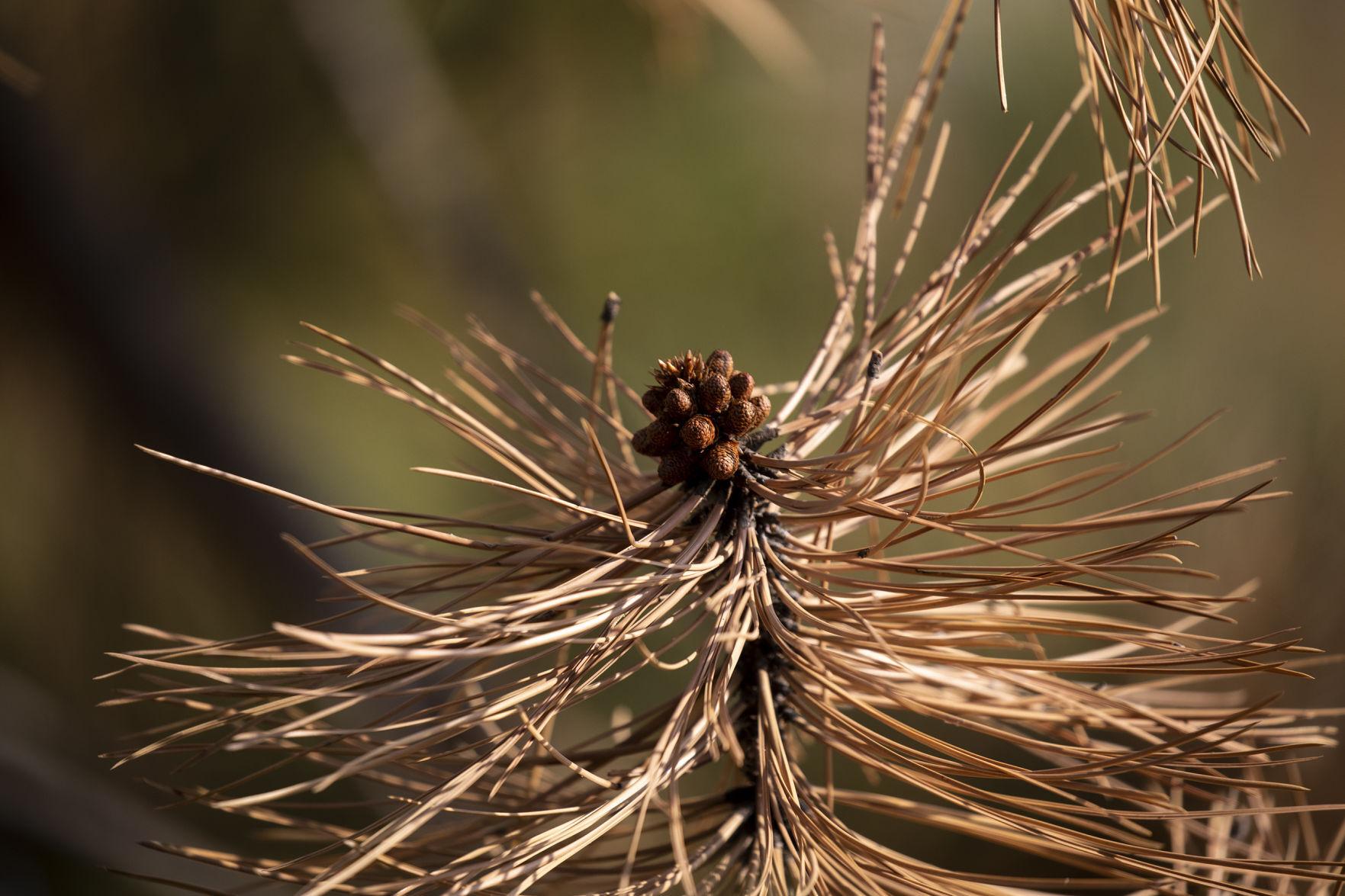 Browned pine needles can be seen on a McManamen Park pine tree.

A man described as a “big player” in the drug trade in Campbell County has pleaded guilty to several drug charges.

Prosecutors will recommend that Matthew Skipper, 38, spend 12 to 14 years in prison for delivery of fentanyl and heroin — both counts that he pleaded guilty to Sept. 29. He pleaded no contest to possession with intent to deliver fentanyl.

The 12 to 14 years will be recommend on each count, but with recommendations that they be served concurrently, which would reduce his prison time.

Louey Williams, the team leader with the Northeast Wyoming drug task force through the Division of Criminal Investigation, said that Skipper was involved “in basically every drug on the planet, it seems like.”

“He was a significant player over there,” said Williams, who is based in Sheridan. “Meth is bad enough, but when you’ve got heroin and fentanyl, it’s horrible.”

Skipper had been sentenced to 10 years in prison in 2012 on drug delivery charges in Park County, but it is unclear when he came to Gillette.

Two of the charges against him came from him allegedly selling fentanyl in Gillette in March (one of those was dismissed in a plea agreement). Two from May alleged delivery of heroin and possession with intent to deliver marijuana (the marijuana charge was later dismissed), and two in July alleged possessing fentanyl and cocaine with intent to deliver (the cocaine charge was dismissed).

Skipper was arrested July 1 and 121 fentanyl pills and 40 grams of cocaine were found among his belongings. He was staying at the house because he had been fighting with his girlfriend, Megan K. Mikkelson, (aka Megan K. Wells), 31, who also has been charged with delivery of fentanyl and conspiracy to deliver fentanyl with Skipper.

Those charges carry sentencing enhancements because she had a previous conviction for possession with intent to deliver in 2014 in Campbell County.

She has not yet entered a plea in District Court.

The affidavit of probable cause filed in Mikkelson’s case lists five confidential sources interviewed by DCI who detailed drug interactions with Skipper or Mikkelson. Among those were:

Law enforcement agencies in Campbell County have been on the lookout for fentanyl after at least six people have died here since December of fentanyl overdoses.

Skipper had been charged with sentencing enhancements with a maximum penalty of 40 years in prison because of his previous Park County conviction. But those enhancements were dropped in the plea agreement.

Prosecutors also agreed not to file additional delivery charges for meth and fentany, and a possession charge involving n-ethypentylone.

As part of the agreement, Skipper can argue for a lesser sentence than recommended by prosecutors. 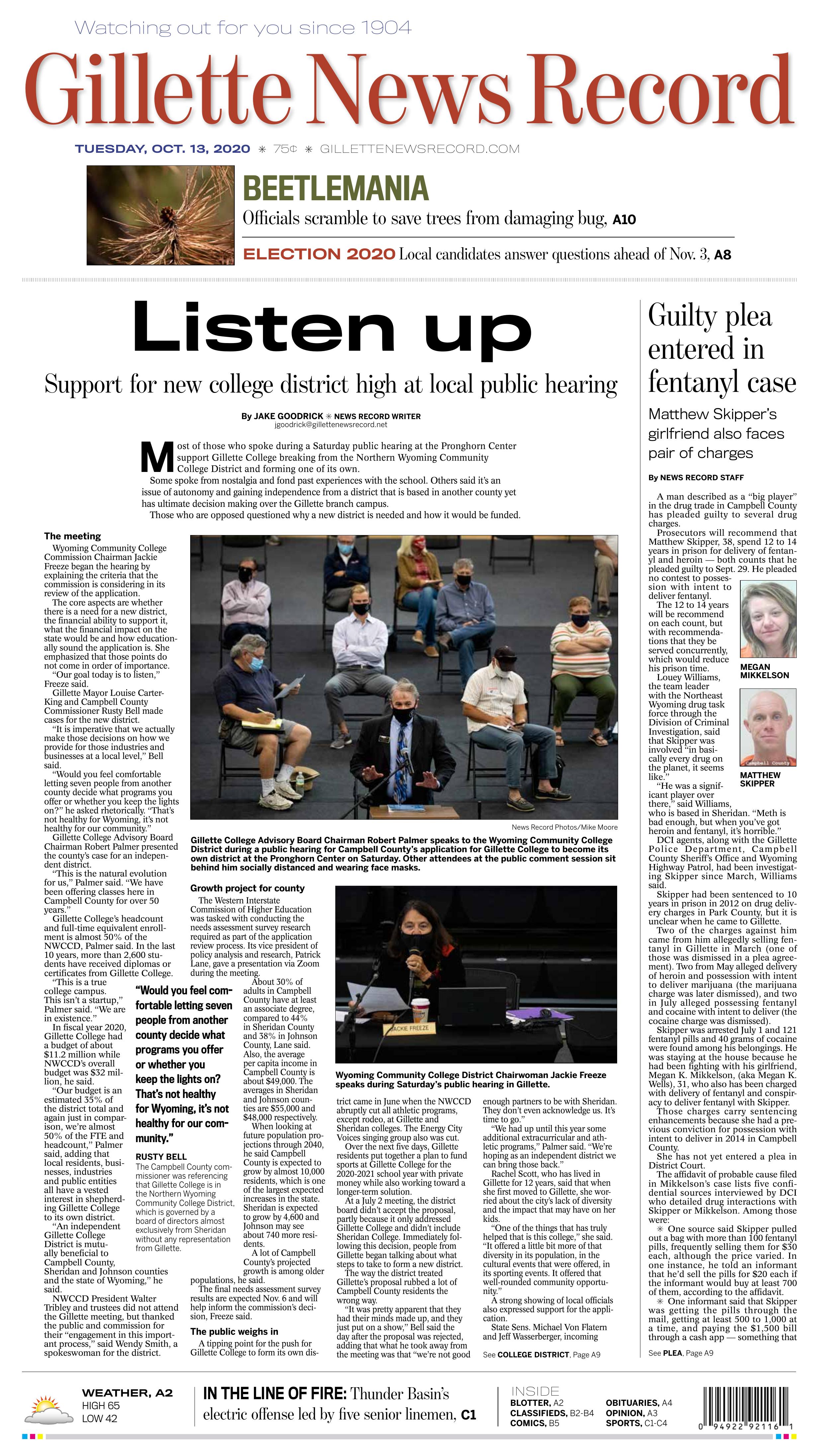