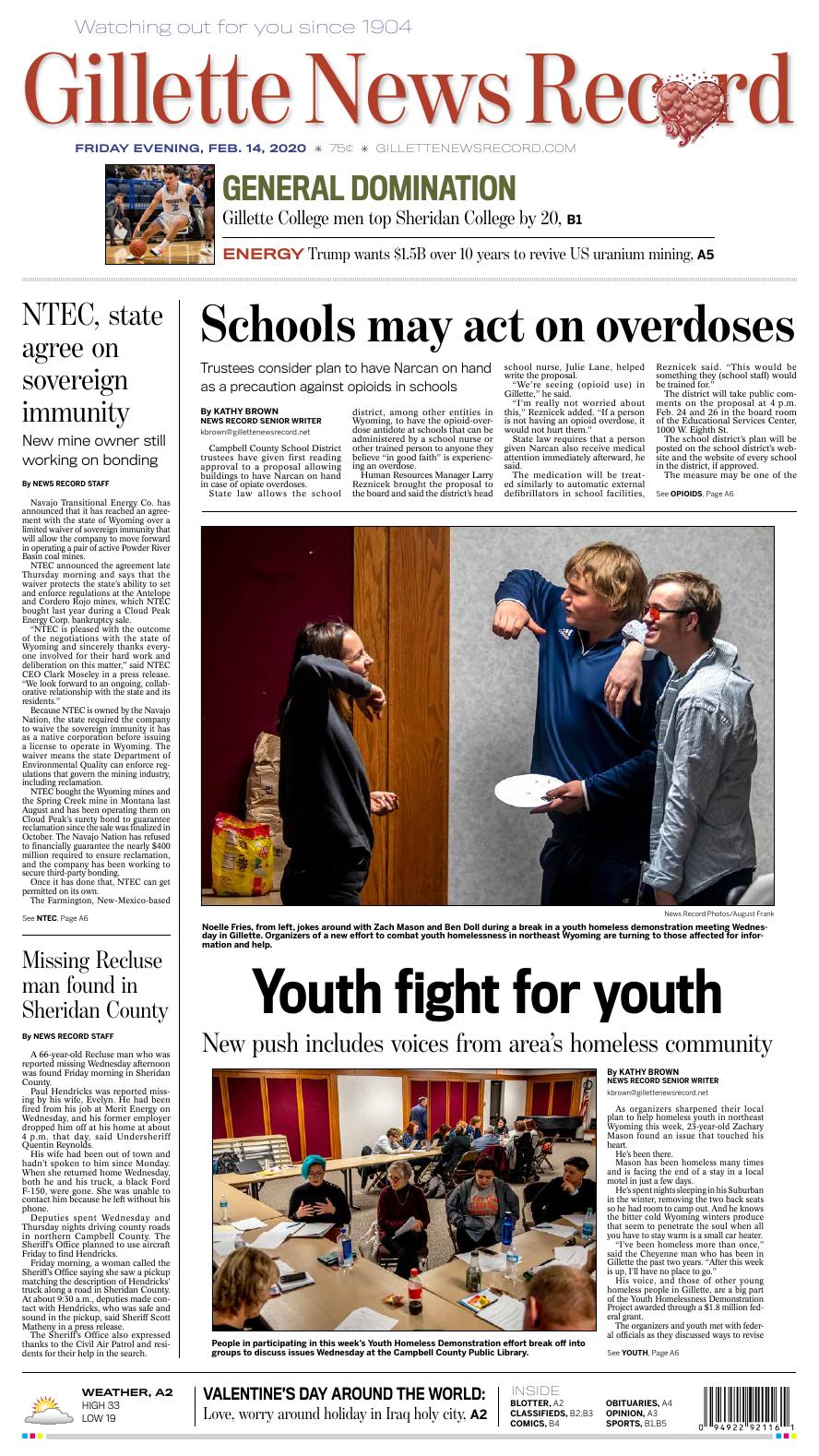 Campbell County School District trustees have given first reading approval to a proposal allowing buildings to have Narcan on hand in case of opiate overdoses.

State law allows the school district, among other entities in Wyoming, to have the opioid-overdose antidote at schools that can be administered by a school nurse or other trained person to anyone they believe “in good faith” is experiencing an overdose.

“We’re seeing (opioid use) in Gillette,” he said.

“I’m really not worried about this,” Reznicek added. “If a person is not having an opioid overdose, it would not hurt them.”

The medication will be treated similarly to automatic external defibrillators in school facilities, Reznicek said. “This would be something they (school staff) would be trained for.”

The district will take public comments on the proposal at 4 p.m. Feb. 24 and 26 in the board room of the Educational Services Center, 1000 W. Eighth St.

The measure may be one of the first introduced among Wyoming school districts.

“It always makes us proud when we’re ahead of the game,” Reznicek said.

Under the proposal, the training will include:

Building administrators and nurses will determine the storage location in schools, along with access and security of the medication, and the nurse or building coordinator will monitor expiration dates.

In addition, coaches and activity sponsors may participate in training for the care of an opioid overdose and administration of the medication. The medication also will be accessible at building locations during, before and after school activities.

After the public hearings, the measure will be brought back to the school board for a final reading and vote.

The district’s plan is based on guidelines from the National Association of School Nurses and the Wyoming Department of Health.

Noelle Fries, from left, jokes around with Zach Mason and Ben Doll during a break in a youth homeless demonstration meeting Wednesday in Gillette. Organizers of a new effort to combat youth homelessness in northeast Wyoming are turning to those affected for information and help.

People in participating in this week’s Youth Homeless Demonstration effort break off into groups to discuss issues Wednesday at the Campbell County Public Library.

Richard Cisneros, right, weighs in on how to make young people feel included in finding solutions to youth homelessness Wednesday.

Noelle Fries gives a talk on how to collaborate with youth, especially on the top of homelessness. "youth have never been invited to sit at the table," Fries said.

Ben Doll weighs on on collaborating with youth on Wednesday's Youth Homelessness Demonstration.

As organizers sharpened their local plan to help homeless youth in northeast Wyoming this week, 23-year-old Zachary Mason found an issue that touched his heart.

Mason has been homeless many times and is facing the end of a stay in a local motel in just a few days.

He’s spent nights sleeping in his Suburban in the winter, removing the two back seats so he had room to camp out. And he knows the bitter cold Wyoming winters produce that seem to penetrate the soul when all you have to stay warm is a small car heater.

“I’ve been homeless more than once,” said the Cheyenne man who has been in Gillette the past two years. “After this week is up, I’ll have no place to go.”

His voice, and those of other young homeless people in Gillette, are a big part of the Youth Homelessness Demonstration Project awarded through a $1.8 million federal grant.

The organizers and youth met with federal officials as they discussed ways to revise their initial application for the HUD grant that focuses on homelessness in rural America.

“The fact that they’re trying to find a way to provide homes and an education for youth is a big deal,” Mason said. “What we’re trying to do is we want everybody to have the opportunity everyone else has. It’s awesome.”

Mason said he knows there are a lot of homeless youth in Gillette who are couch surfing and won’t tell anyone in authority out of fear of what might happen to them.

Mason has been homeless for four years. While he has hatched a plan to try to extend his stay at the motel — it involves shoveling snow — he said that “the hardest part is in the winter.”

Now, this project and playing a role in helping others like him, has engergized Mason.

“I have not showed this much interest in something for a long time,” he said about working to combat youth homelessness.

They may be homeless, but like everyone, they have hopes, dreams and goals, he said.

Gillette resident Cami Riddle, 20, is the age 18-24 leader for the Youth Action Board.

Also serving on the board are locals Dakota Jackson, 18, and Ben Doll, who represents younger youth.

Their stories all have similarities: living in conflicted homes with families in which love was not in the vocabulary, oftentimes in situations and places where they felt unsafe and experienced trauma. Several were kicked out by their parents. After couch surfing, they found an answer through YES House programs in their hometown.

Doll said his role on the Youth Action Board, which will have a say in every program through the HUD grant, is his way of giving back.

“It’s just my way of repaying my debt to Gillette,” he said. “Gillette has saved my life. In my honest opinion, that’s how I see this program. We’re giving back to our community.

Revising the plan in the next two months to resubmit it sometime in April is a big step, Jackson said.

“It will be a life-changing experience for our community,” added Riddle. “They will be really impressed. We want to expand community buy-in.”

The voices of the youth will be integral all the way through the process. They will essentially run the show: a plan determined by youth to help other youth who live through similar experiences.

The two-day meeting this week drew about 40 people from the community.

The plan to revamp programs to fill the needs of homeless youth in Campbell, Crook and Weston counties isn’t expected to be easy or happen without struggle.

This corner of Wyoming doesn’t have a lot of infrastructure in place to meet the project’s goals, and every penny spent on infrastructure is one less to spend helping youth.

“For youth alone, we need 95 units,” said Tatyana Walker, chairwoman of the project. “We don’t have 95 units in the entire state of Wyoming.

“For me, it all comes down to our kids.”

A full coal train heads out from the Antelope mine in southern Campbell County. Navajo Transitional Energy Co. bought the mine from Cloud Peak Energy last year.

Navajo Transitional Energy Co. has announced that it has reached an agreement with the state of Wyoming over a limited waiver of sovereign immunity that will allow the company to move forward in operating a pair of active Powder River Basin coal mines.

NTEC announced the agreement late Thursday morning and says that the waiver protects the state’s ability to set and enforce regulations at the Antelope and Cordero Rojo mines, which NTEC bought last year during a Cloud Peak Energy Corp. bankruptcy sale.

“NTEC is pleased with the outcome of the negotiations with the state of Wyoming and sincerely thanks everyone involved for their hard work and deliberation on this matter,” said NTEC CEO Clark Moseley in a press release. “We look forward to an ongoing, collaborative relationship with the state and its residents.”

Because NTEC is owned by the Navajo Nation, the state required the company to waive the sovereign immunity it has as a native corporation before issuing a license to operate in Wyoming. The waiver means the state Department of Environmental Quality can enforce regulations that govern the mining industry, including reclamation.

NTEC bought the Wyoming mines and the Spring Creek mine in Montana last August and has been operating them on Cloud Peak’s surety bond to guarantee reclamation since the sale was finalized in October. The Navajo Nation has refused to financially guarantee the nearly $400 million required to ensure reclamation, and the company has been working to secure third-party bonding.

Once it has done that, NTEC can get permitted on its own.

The Farmington, New-Mexico-based company bought the mines for a package that comes to about $170 million, plus a five-year royalty on tons of coal produced. The largest part of the deal was assuming nearly $94 million of pre- and post-bankruptcy taxes and royalties.

The agreement also is one Gov. Mark Gordon is pleased with, he said in an announcement about the deal.

“This agreement now clears a pathway for NTEC to take the necessary steps to apply for the transfer of permits to mine at the Antelope, Cordero Rojo and Young’s Creek coal mines,” he said. “It is consistent with the requirements in the Wyoming Environmental Quality Act and the Surface Mine Control and Reclamation Act.”

The Youngs Creek mine is not operational.

He said the agreement is the result of months of work and that, “I look forward to a long and productive future for NTEC in our state.”

Paul Hendricks was reported missing by his wife, Evelyn. He had been fired from his job at Merit Energy on Wednesday, and his former employer dropped him off at his home at about 4 p.m. that day, said Undersheriff Quentin Reynolds.

His wife had been out of town and hadn’t spoken to him since Monday. When she returned home Wednesday, both he and his truck, a black Ford F-150, were gone. She was unable to contact him because he left without his phone.

Friday morning, a woman called the Sheriff’s Office saying she saw a pickup matching the description of Hendricks’ truck along a road in Sheridan County. At about 9:30 a.m., deputies made contact with Hendricks, who was safe and sound in the pickup, said Sheriff Scott Matheny in a press release.

The Sheriff’s Office also expressed thanks to the Civil Air Patrol and residents for their help in the search. 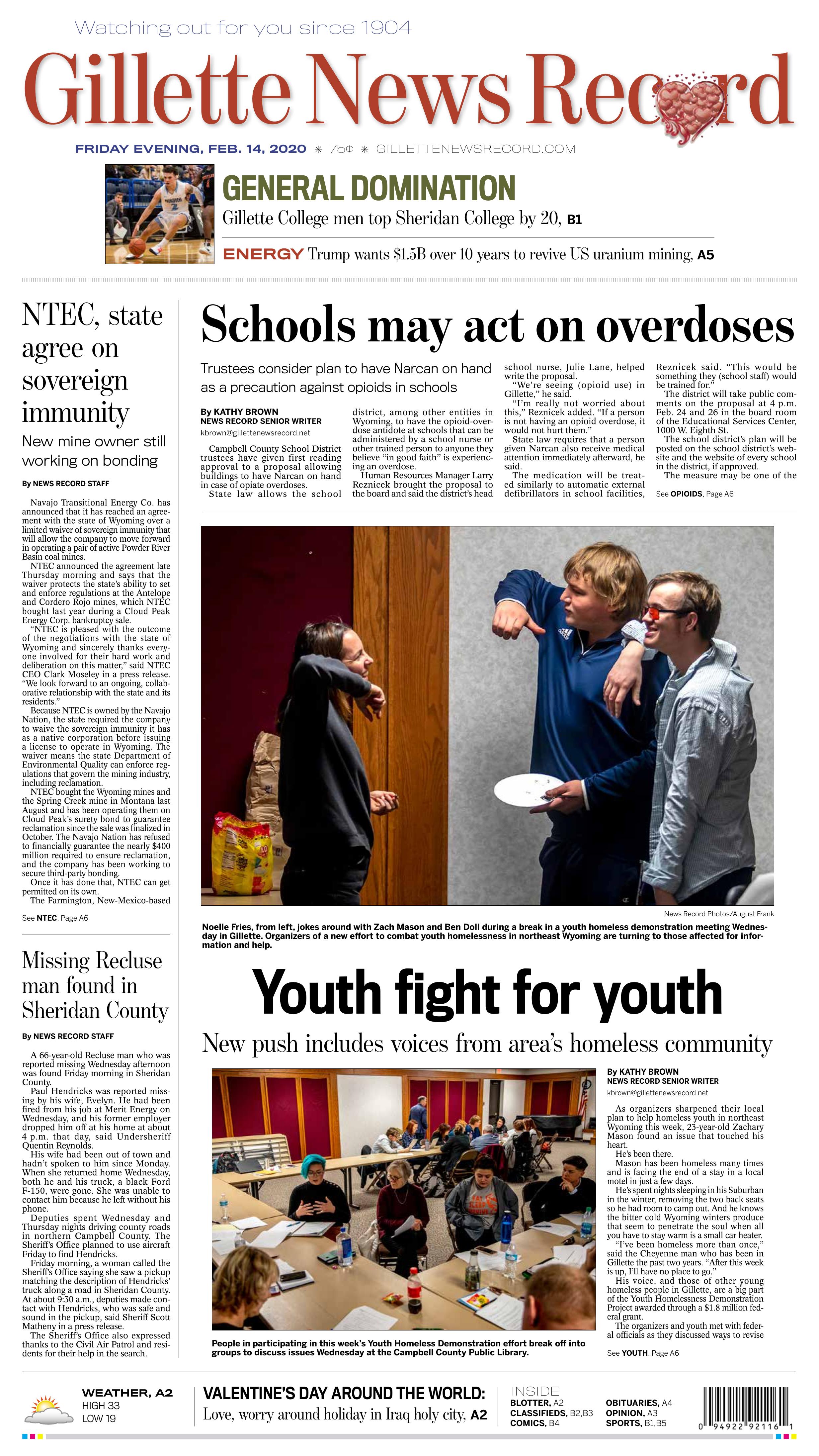