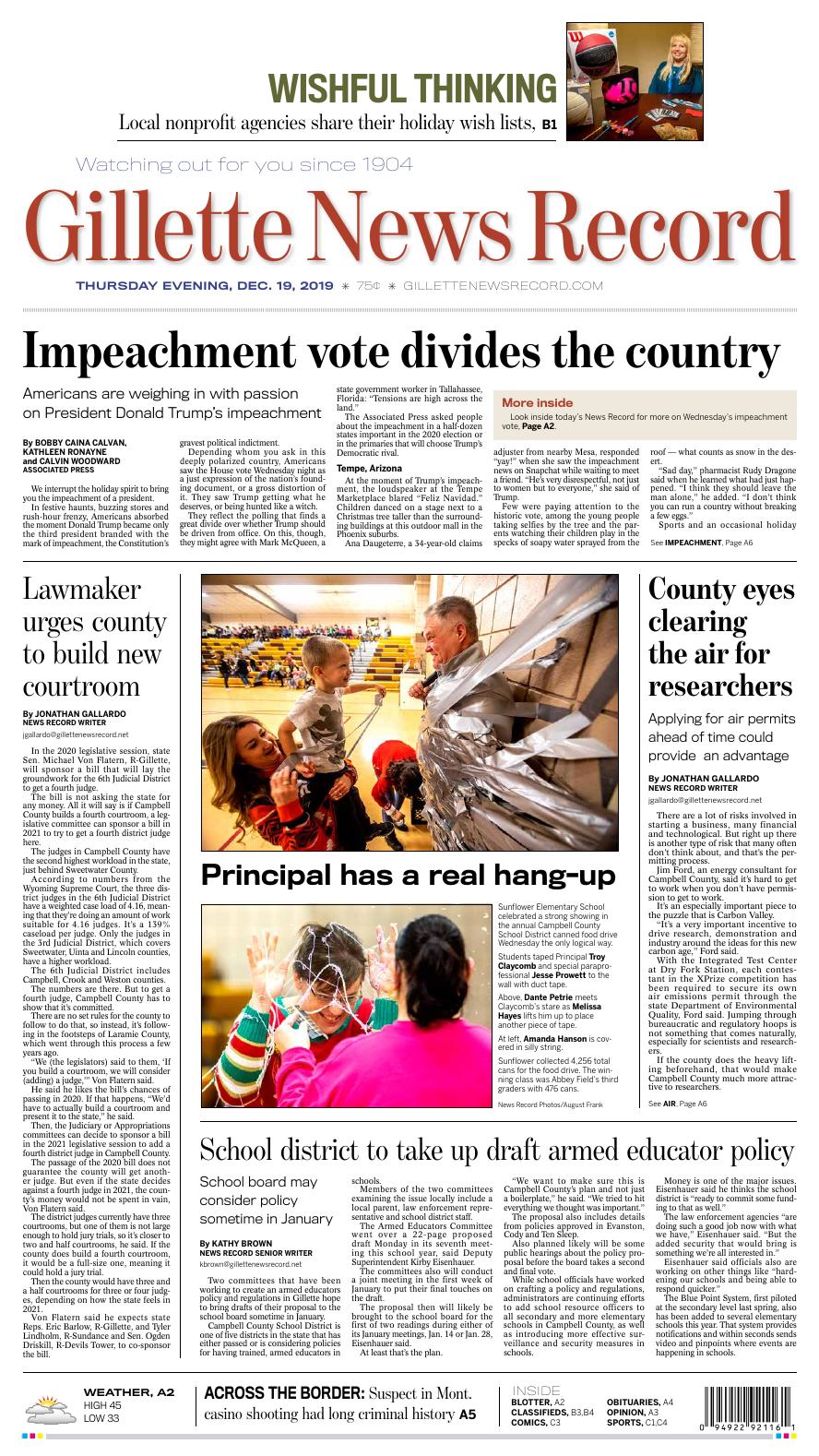 Two committees that have been working to create an armed educators policy and regulations in Gillette hope to bring drafts of their proposal to the school board sometime in January.

Campbell County School District is one of five districts in the state that has either passed or is considering policies for having trained, armed educators in schools.

Members of the two committees examining the issue locally include a local parent, law enforcement representative and school district staff.

The committees also will conduct a joint meeting in the first week of January to put their final touches on the draft.

The proposal then will likely be brought to the school board for the first of two readings during either of its January meetings, Jan. 14 or Jan. 28, Eisenhauer said.

At least that’s the plan.

“We want to make sure this is Campbell County’s plan and not just a boilerplate,” he said. “We tried to hit everything we thought was important.”

Also planned likely will be some public hearings about the policy proposal before the board takes a second and final vote.

While school officials have worked on crafting a policy and regulations, administrators are continuing efforts to add school resource officers to all secondary and more elementary schools in Campbell County, as well as introducing more effective surveillance and security measures in schools.

“This (draft) is just one piece of safety and security for us,” Eisenhauer said. “We’re continuing to work with the city and the county on getting more SROs.”

Money is one of the major issues. Eisenhauer said he thinks the school district is “ready to commit some funding to that as well.”

The law enforcement agencies “are doing such a good job now with what we have,” Eisenhauer said. “But the added security that would bring is something we’re all interested in.”

Eisenhauer said officials also are working on other things like “hardening our schools and being able to respond quicker.”

The Blue Point System, first piloted at the secondary level last spring, also has been added to several elementary schools this year. That system provides notifications and within seconds sends video and pinpoints where events are happening in schools.

“It really has improved our response times,” he said, adding that looking for ways to increase security is “something we’ll never stop.”

In the 2020 legislative session, state Sen. Michael Von Flatern, R-Gillette, will sponsor a bill that will lay the groundwork for the 6th Judicial District to get a fourth judge.

The bill is not asking the state for any money. All it will say is if Campbell County builds a fourth courtroom, a legislative committee can sponsor a bill in 2021 to try to get a fourth district judge here.

The judges in Campbell County have the second highest workload in the state, just behind Sweetwater County.

According to numbers from the Wyoming Supreme Court, the three district judges in the 6th Judicial District have a weighted case load of 4.16, meaning that they’re doing an amount of work suitable for 4.16 judges. It’s a 139% caseload per judge. Only the judges in the 3rd Judicial District, which covers Sweetwater, Uinta and Lincoln counties, have a higher workload.

The numbers are there. But to get a fourth judge, Campbell County has to show that it’s committed.

There are no set rules for the county to follow to do that, so instead, it’s following in the footsteps of Laramie County, which went through this process a few years ago.

“We (the legislators) said to them, ‘If you build a courtroom, we will consider (adding) a judge,’” Von Flatern said.

He said he likes the bill’s chances of passing in 2020. If that happens, “We’d have to actually build a courtroom and present it to the state,” he said.

Then, the Judiciary or Appropriations committees can decide to sponsor a bill in the 2021 legislative session to add a fourth district judge in Campbell County.

The passage of the 2020 bill does not guarantee the county will get another judge. But even if the state decides against a fourth judge in 2021, the county’s money would not be spent in vain, Von Flatern said.

The district judges currently have three courtrooms, but one of them is not large enough to hold jury trials, so it’s closer to two and half courtrooms, he said. If the county does build a fourth courtroom, it would be a full-size one, meaning it could hold a jury trial.

Then the county would have three and a half courtrooms for three or four judges, depending on how the state feels in 2021.

There are a lot of risks involved in starting a business, many financial and technological. But right up there is another type of risk that many often don’t think about, and that’s the permitting process.

It’s an especially important piece to the puzzle that is Carbon Valley.

“It’s a very important incentive to drive research, demonstration and industry around the ideas for this new carbon age,” Ford said.

With the Integrated Test Center at Dry Fork Station, each contestant in the XPrize competition has been required to secure its own air emissions permit through the state Department of Environmental Quality, Ford said. Jumping through bureaucratic and regulatory hoops is not something that comes naturally, especially for scientists and researchers.

If the county does the heavy lifting beforehand, that would make Campbell County much more attractive to researchers.

“We want them to come in with an assurance that they could run their process without having to wait a year and a half chasing down permitting,” Ford said.

What Ford hopes to do is get an air quality permit for the 9.5 acres of land around the Advanced Carbon Products Innovation Center.

“If we’re able to find a way to create this bubble air emissions permit, I think it could be a huge, huge pull,” he said, adding that he’s not sure if it’s even possible under current state law.

The county would be the permit applicant but would not be the entity creating the emissions.

Now, the applicant for a permit is responsible for monitoring and reporting to make sure air quality “stays consistent with the limitations of the permit,” said County Administrative Director Carol Seeger.

What the county wants to do is apply for the permit on behalf of “a bunch of potential emitters,” she said, while not doing any emitting of its own.

“It’s not set up right now, statutorily, for that concept,” Seeger said.

“That’s where we need to take it to the Legislature,” said Commission Chairman Rusty Bell. “This concept seems fair.”

Ford said he also wants to use this as a stepping stone to get a larger bubble permit “to find a way through that regulatory thicket and drop some breadcrumbs along the way to be able to retrace our path.”

Ford said when he really lets himself dream about the carbon possibilities for the area, one thing he’s very excited about is the idea of offering carbon capture sequestration as a utility, just like water or electricity.

If the county could offer a place for researchers and companies to store carbon dioxide for a price, “that would really make waves out in the world in terms of us demonstrating our commitment toward what we want to do here,” Ford said.

“We’re not at that point yet, but it should be on everybody’s radar,” Bell added.

There now are a lot of questions and not many answers. If the county’s going to get this done, it needs the backing of the state.

“We can’t make the conversation just about Campbell County,” Ford said. “This concept works for us, obviously, but it also applies in Lincoln County, Sublette, Converse, all these other places that face the same issues.”

Collaboration is key, he said.

“What we do here is a scaffold to support the overall vision of the state,” Ford said. “If we’re doing something wildly out of tune with what the state’s priorities are, maybe we need to adjust. Or maybe they need to adjust.” 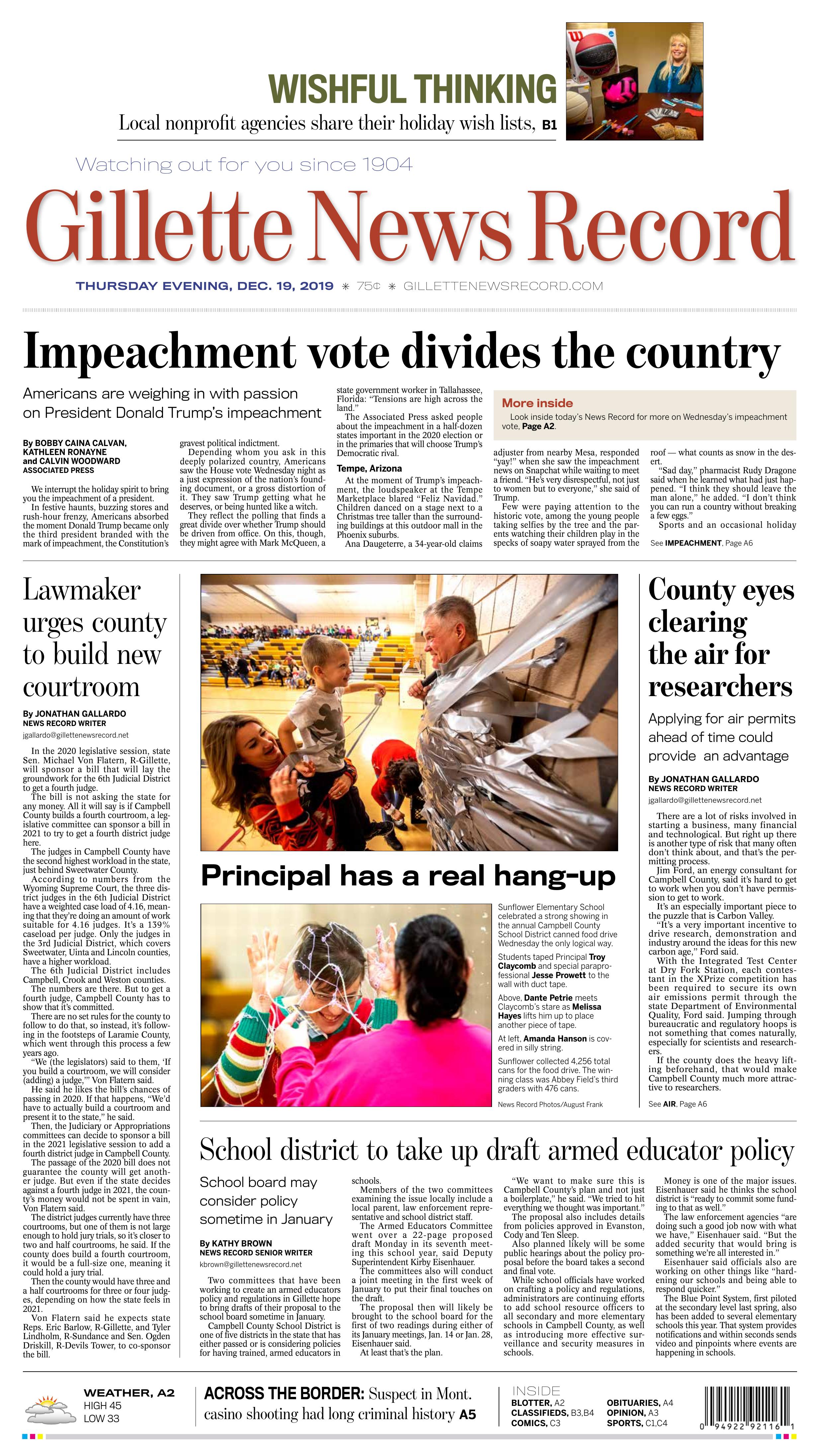