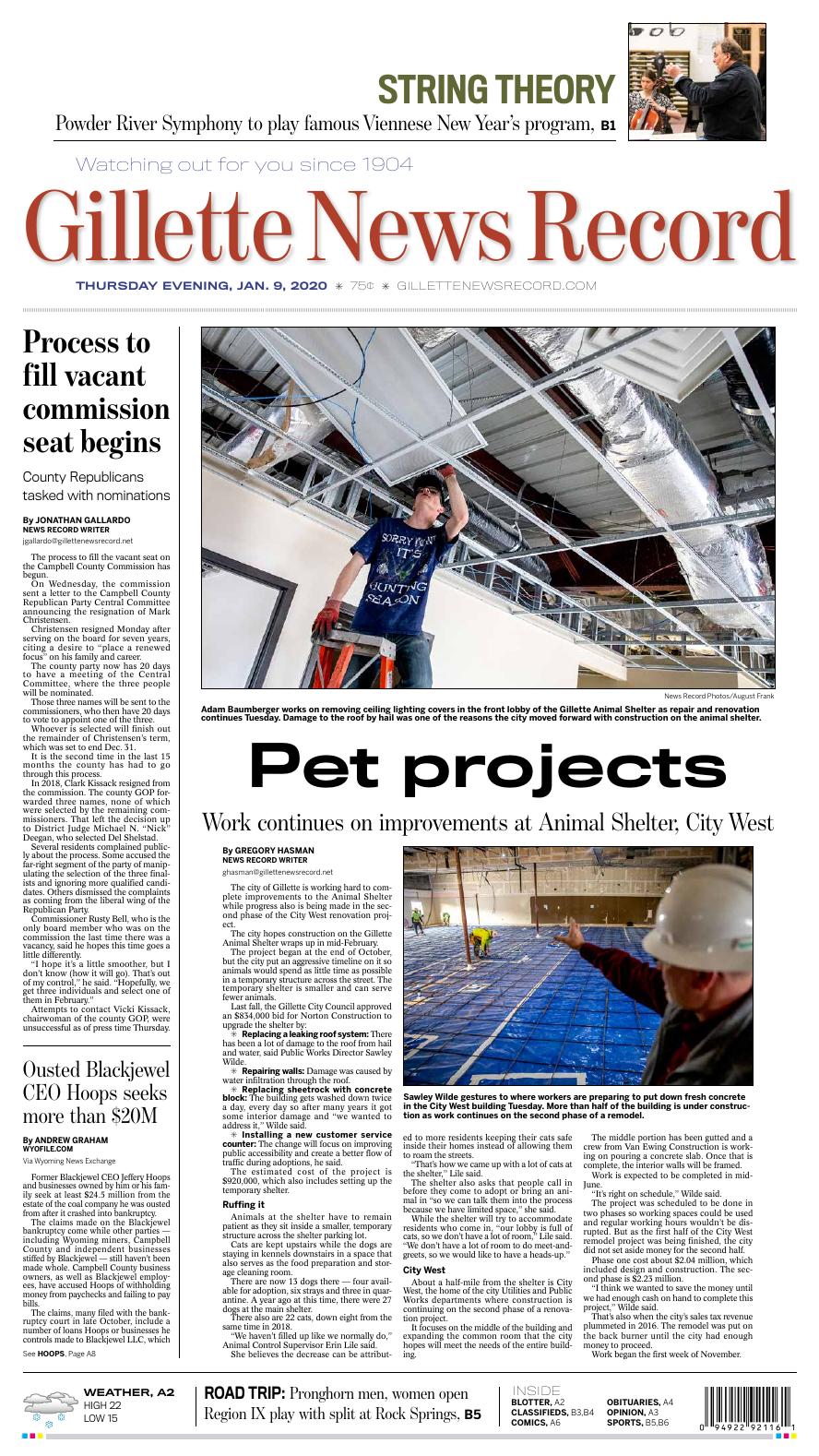 Adam Baumberger works on removing ceiling lighting covers in the front lobby of the Gillette Animal Shelter as repair and renovation continues Tuesday. Damage to the roof by hail was one of the reasons the city moved forward with construction on the animal shelter.

Sawley Wilde gestures to where workers are preparing to put down fresh concrete in the City West building Tuesday. More than half of the building is under construction as work continues on the second phase of a remodel.

Construction crews prepare for concrete to be poured for new flooring in the City West building on Tuesday.

Jose Diaz works on wrapping up pipes in the animal shelters dog room on Tuesday.

Man Kiser tosses some dirt in a wheelbarrow at City West on Tuesday.

Jose Diaz works on wrapping up pipes in the animal shelters dog room on Tuesday.

The city of Gillette is working hard to complete improvements to the Animal Shelter while progress also is being made in the second phase of the City West renovation project.

The city hopes construction on the Gillette Animal Shelter wraps up in mid-February.

The project began at the end of October, but the city put an aggressive timeline on it so animals would spend as little time as possible in a temporary structure across the street. The temporary shelter is smaller and can serve fewer animals.

Last fall, the Gillette City Council approved an $834,000 bid for Norton Construction to upgrade the shelter by:

The estimated cost of the project is $920,000, which also includes setting up the temporary shelter.

Animals at the shelter have to remain patient as they sit inside a smaller, temporary structure across the shelter parking lot.

Cats are kept upstairs while the dogs are staying in kennels downstairs in a space that also serves as the food preparation and storage cleaning room.

There are now 13 dogs there — four available for adoption, six strays and three in quarantine. A year ago at this time, there were 27 dogs at the main shelter.

“We haven’t filled up like we normally do,” Animal Control Supervisor Erin Lile said.

She believes the decrease can be attributed to more residents keeping their cats safe inside their homes instead of allowing them to roam the streets.

“That’s how we came up with a lot of cats at the shelter,” Lile said.

The shelter also asks that people call in before they come to adopt or bring an animal in “so we can talk them into the process because we have limited space,” she said.

About a half-mile from the shelter is City West, the home of the city Utilities and Public Works departments where construction is continuing on the second phase of a renovation project.

It focuses on the middle of the building and expanding the common room that the city hopes will meet the needs of the entire building.

The middle portion has been gutted and a crew from Van Ewing Construction is working on pouring a concrete slab. Once that is complete, the interior walls will be framed.

Work is expected to be completed in mid-June.

The project was scheduled to be done in two phases so working spaces could be used and regular working hours wouldn’t be disrupted. But as the first half of the City West remodel project was being finished, the city did not set aside money for the second half.

Phase one cost about $2.04 million, which included design and construction. The second phase is $2.23 million.

“I think we wanted to save the money until we had enough cash on hand to complete this project,” Wilde said.

That’s also when the city’s sales tax revenue plummeted in 2016. The remodel was put on the back burner until the city had enough money to proceed.

The process to fill the vacant seat on the Campbell County Commission has begun.

On Wednesday, the commission sent a letter to the Campbell County Republican Party Central Committee announcing the resignation of Mark Christensen.

Christensen resigned Monday after serving on the board for seven years, citing a desire to “place a renewed focus” on his family and career.

The county party now has 20 days to have a meeting of the Central Committee, where the three people will be nominated.

Those three names will be sent to the commissioners, who then have 20 days to vote to appoint one of the three.

Whoever is selected will finish out the remainder of Christensen’s term, which was set to end Dec. 31.

It is the second time in the last 15 months the county has had to go through this process.

In 2018, Clark Kissack resigned from the commission. The county GOP forwarded three names, none of which were selected by the remaining commissioners. That left the decision up to District Judge Michael N. “Nick” Deegan, who selected Del Shelstad.

Several residents complained publicly about the process. Some accused the far-right segment of the party of manipulating the selection of the three finalists and ignoring more qualified candidates. Others dismissed the complaints as coming from the liberal wing of the Republican Party.

Commissioner Rusty Bell, who is the only board member who was on the commission the last time there was a vacancy, said he hopes this time goes a little differently.

“I hope it’s a little smoother, but I don’t know (how it will go). That’s out of my control,” he said. “Hopefully, we get three individuals and select one of them in February.”

Attempts to contact Vicki Kissack, chairwoman of the county GOP, were unsuccessful as of press time Thursday.

Former Blackjewel CEO Jeffery Hoops and businesses owned by him or his family seek at least $24.5 million from the estate of the coal company he was ousted from after it crashed into bankruptcy.

The claims made on the Blackjewel bankruptcy come while other parties — including Wyoming miners, Campbell County and independent businesses stiffed by Blackjewel — still haven’t been made whole. Campbell County business owners, as well as Blackjewel employees, have accused Hoops of withholding money from paychecks and failing to pay bills.

The claims, many filed with the bankruptcy court in late October, include a number of loans Hoops or businesses he controls made to Blackjewel LLC, which filed for bankruptcy on July 1, 2019. Hundreds of workers at Blackjewel’s two Wyoming mines were sent home that day, and went without paychecks for months. Some workers are still waiting to be reimbursed for funds that went missing from their paychecks in the months leading up to the bankruptcy.

The Wall Street Journal has reported that the Hoops family and their companies are angling for $29 million. WyoFile identified $24.5 million.

Hoops’ bankruptcy claims also include financial dealings between Blackjewel and other companies under his or his relatives’ control. In one instance, for example, a Hoops real estate company seeks rent owed by a different Hoops firm.

A claim for $16,500 seeks reimbursement for a June 29 flight on Hoops’ private plane, when he flew to Wyoming to hand deliver cashier’s checks to employees here. In the days after the bankruptcy, as angry miners bashed Hoops in posts on social media, Hoops touted the maneuver in a defiant letter to Blackjewel employees. He had filled the plane with cashier’s checks and flown to Wyoming in a desperate move to ensure workers were paid after a bank cut off his accounts, he wrote in the July 4 letter.

Now, Hoops wants the flight money back, according to one filing.

That figure is on the low end of the claims made by Hoops or associated companies. Jeffery Hoops filed a claim for $3.6 million and Jeffery Hoops Sr. asked for $3.1 million, both for loans they claimed to have made the company. Hoops or his son filed for an additional $6,900 in unnamed “business expenses.”

Another Hoops’ LLC, Triple H Real Estate, filed claims for $7.4 million. At least $5.7 million of that amount is listed as unpaid royalty payments on coal mines in Appalachia.

Another $212,800 is rent in office space that was to be paid by Revelation Energy, one of Hoops’ coal companies.

It’s far from certain the Hoops family will get the money they’re after. Like his former employees and many small Wyoming businesses who were owed significant amounts of money when Blackjewel collapsed, many of Hoops’ loans are unsecured, meaning they are not guaranteed by Blackjewel property. 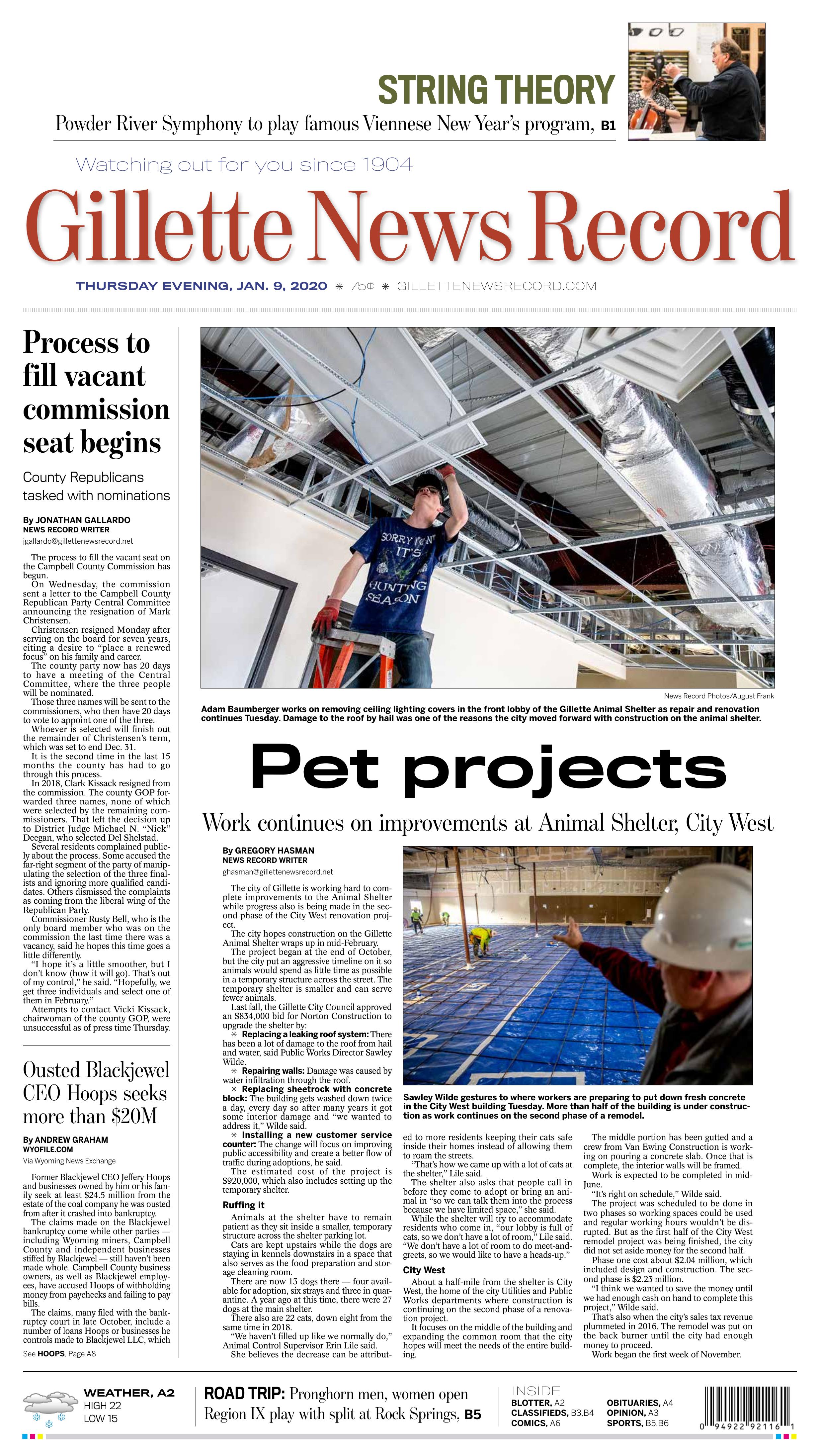