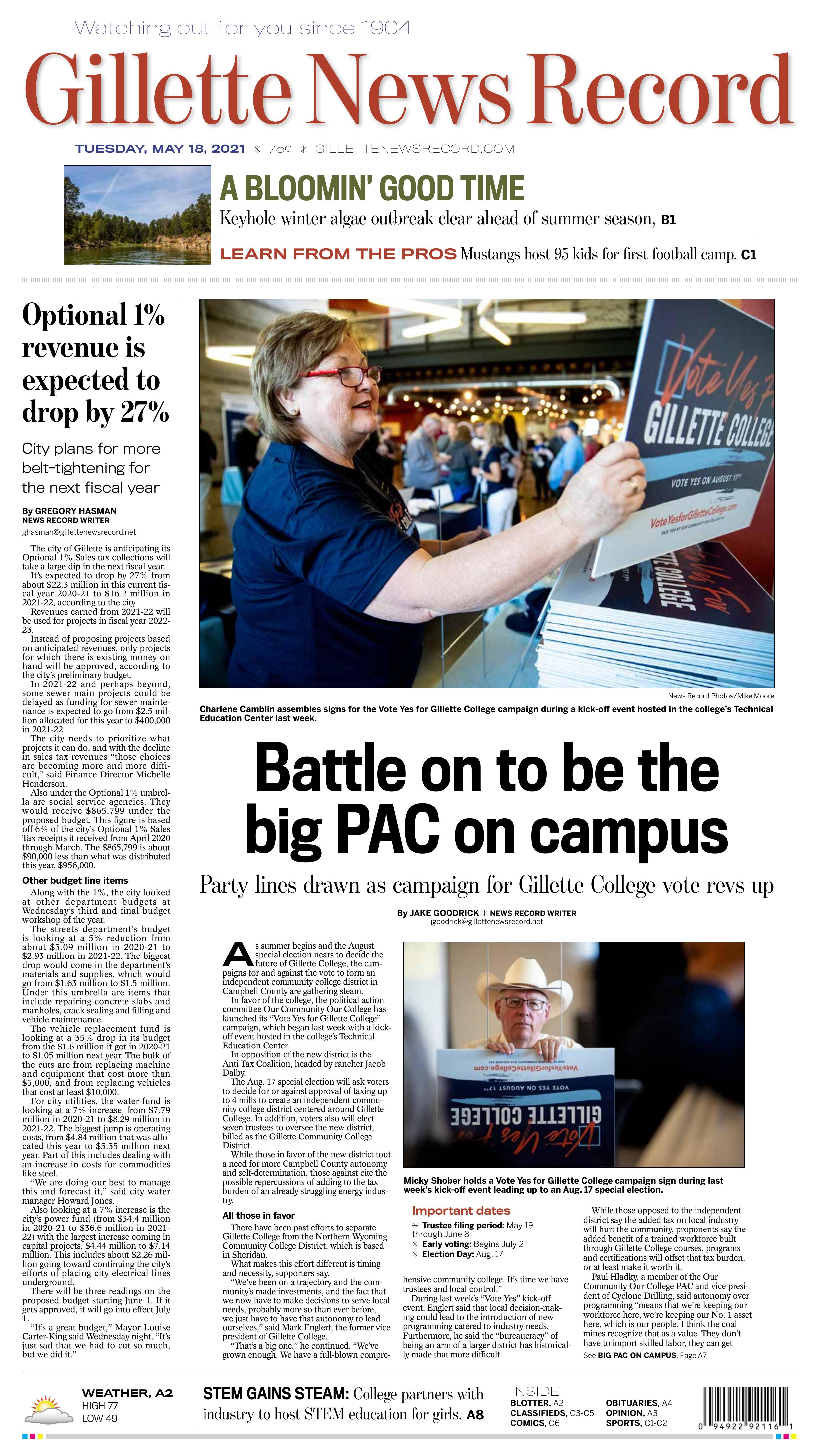 As summer begins and the August special election nears to decide the future of Gillette College, the campaigns for and against the vote to form an independent community college district in Campbell County are gathering steam. 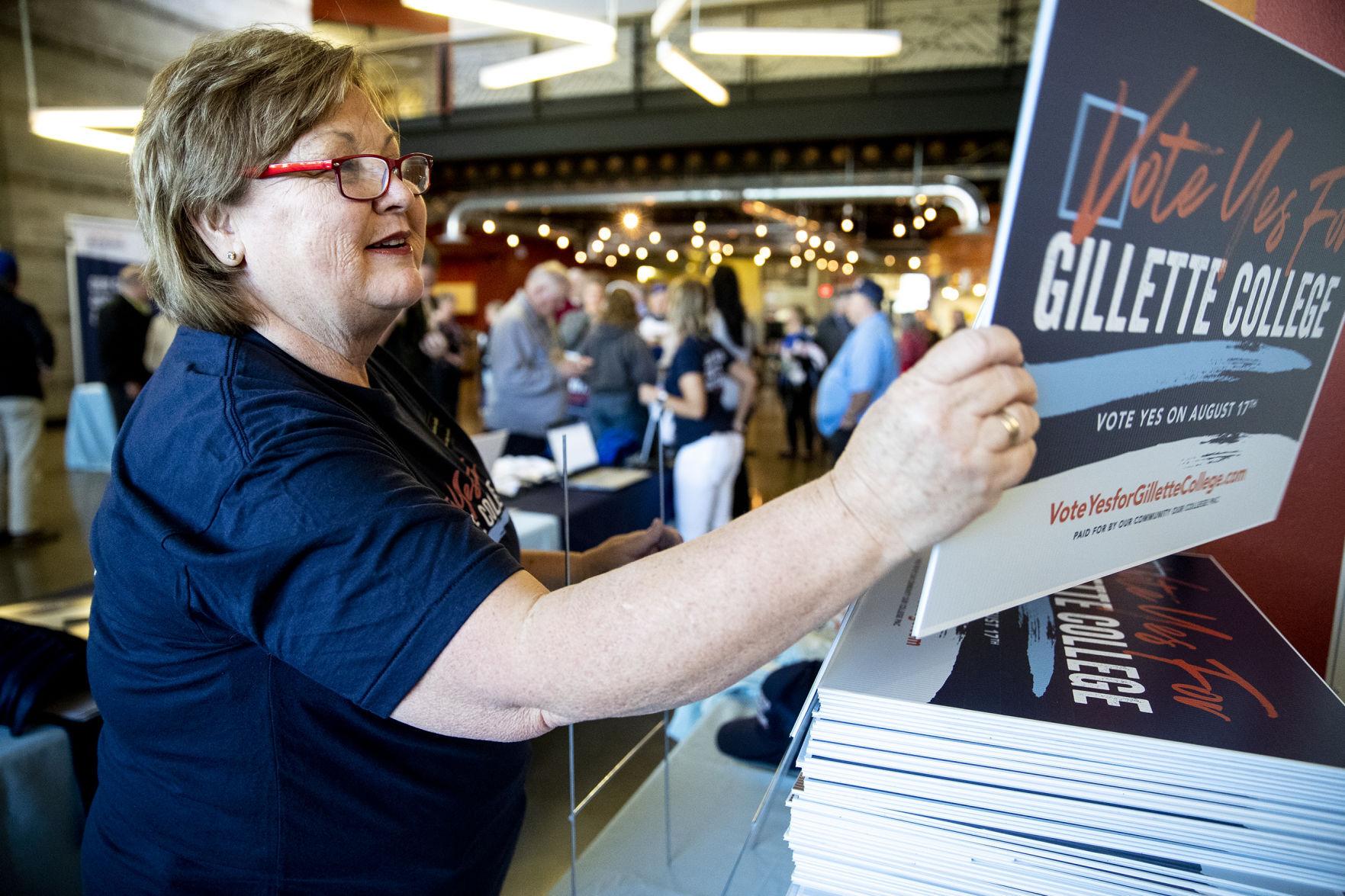 In favor of the college, the political action committee Our Community Our College has launched its “Vote Yes for Gillette College” campaign, which began last week with a kick-off event hosted in the college’s Technical Education Center.

In opposition of the new district is the Anti Tax Coalition, headed by rancher Jacob Dalby.

The Aug. 17 special election will ask voters to decide for or against approval of taxing up to 4 mills to create an independent community college district centered around Gillette College. In addition, voters also will elect seven trustees to oversee the new district, billed as the Gillette Community College District.

While those in favor of the new district tout a need for more Campbell County autonomy and self-determination, those against cite the possible repercussions of adding to the tax burden of an already struggling energy industry.

All those in favor

There have been past efforts to separate Gillette College from the Northern Wyoming Community College District, which is based in Sheridan. 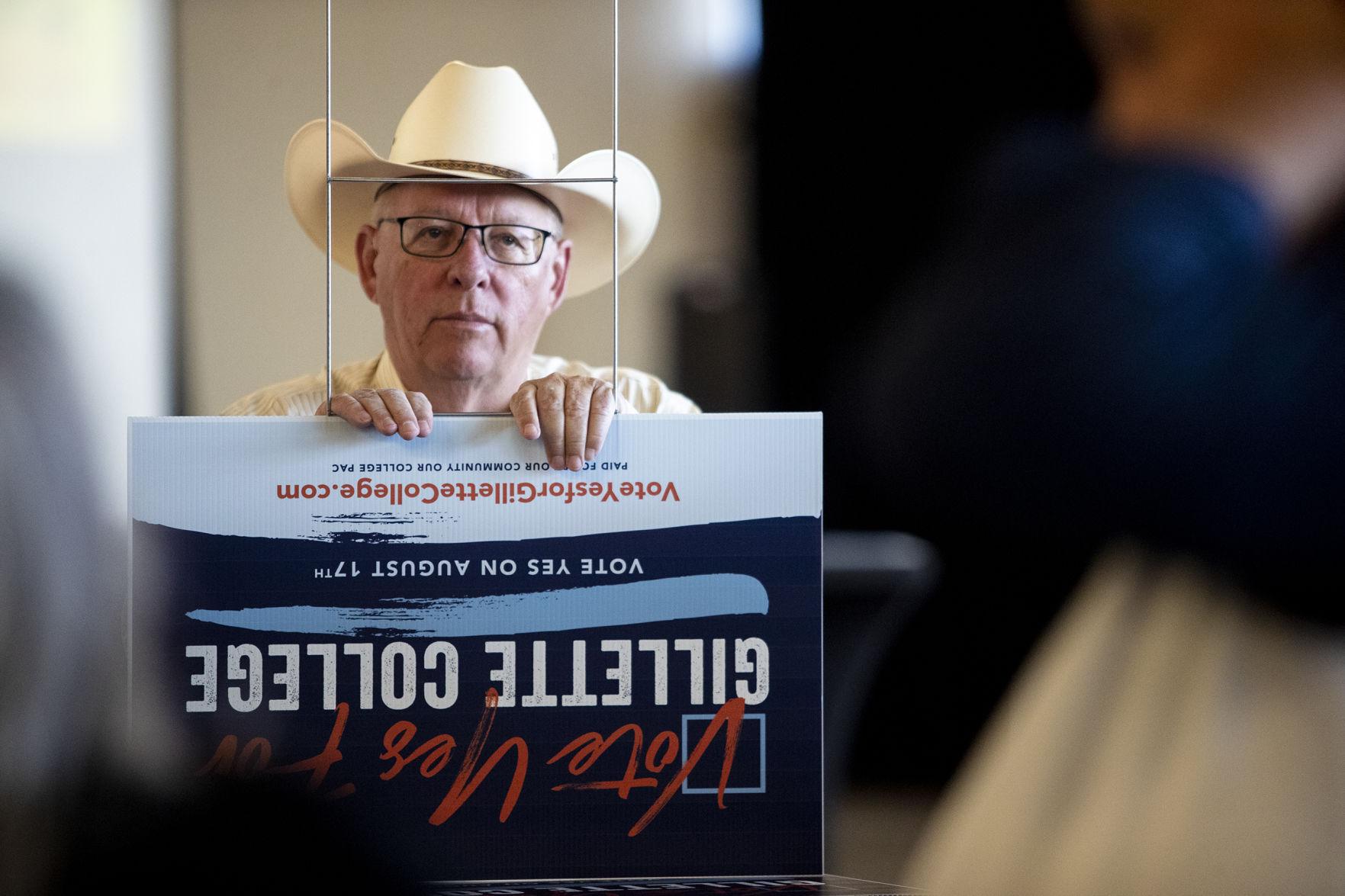 What makes this effort different is timing and necessity, supporters say.

“We’ve been on a trajectory and the community’s made investments, and the fact that we now have to make decisions to serve local needs, probably more so than ever before, we just have to have that autonomy to lead ourselves,” said Mark Englert, the former vice president of Gillette College.

“That’s a big one,” he continued. “We’ve grown enough. We have a full-blown comprehensive community college. It’s time we have trustees and local control.”

During last week’s “Vote Yes” kick-off event, Englert said that local decision-making could lead to the introduction of new programming catered to industry needs. Furthermore, he said the “bureaucracy” of being an arm of a larger district has historically made that more difficult.

While those opposed to the independent district say the added tax on local industry will hurt the community, proponents say the added benefit of a trained workforce built through Gillette College courses, programs and certifications will offset that tax burden, or at least make it worth it.

Paul Hladky, a member of the Our Community Our College PAC and vice president of Cyclone Drilling, said autonomy over programming “means that we’re keeping our workforce here, we’re keeping our No. 1 asset here, which is our people. I think the coal mines recognize that as a value. They don’t have to import skilled labor, they can get skilled labor from Gillette.”

As for the PAC itself, Hladky said it is a focused effort to share a common message and inform voters on the issue ahead of the election.

Frederick Mountain Group, a marketing company based in Jackson, was brought on to lead the group’s marketing campaign, which includes branding, social media targeting, T-shirt and hat giveaways and yard signage throughout the county. 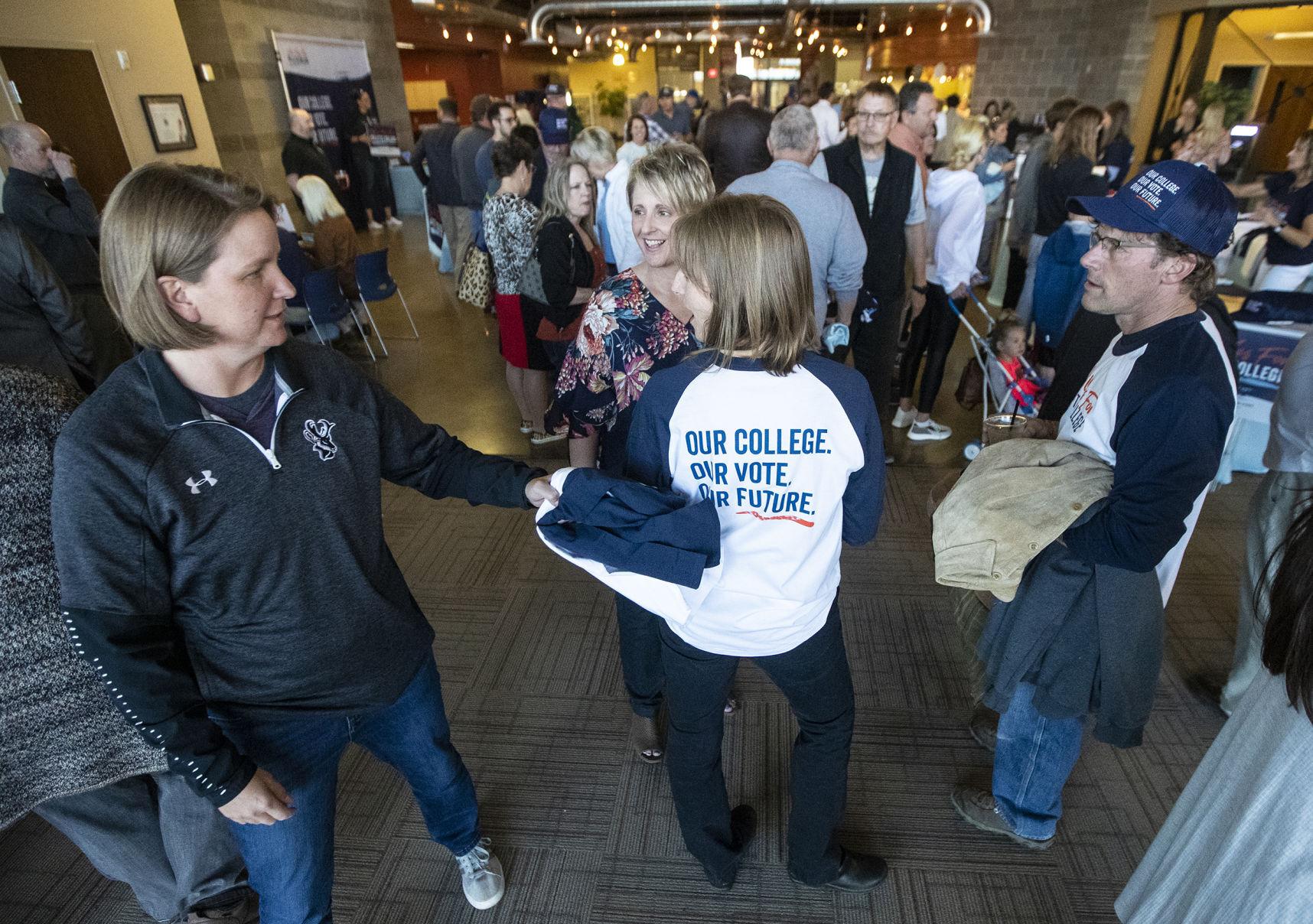 Attendees mingle during a Vote Yes for Gillette College campaign during a kick-off event hosted in the college’s Technical Education Center Tuesday evening.

“It’s really important,” Englert said about the Our Community Our College campaign. “The PAC really is the assembly of energetic, like-minded individuals who understand the value of education to the community’s future and the impact it has on business and industry, citizens … you’ve got to have that core of energy leading the way to get other people engaged.”

As Senate File 83 — the bill calling for the special election to allow Campbell County to vote on taxing itself to create the state’s eighth community college district — made its way through the state Legislature, Fortner opposed it each step of the way.

So far, Dalby said that his PAC is still deciding how it plans to approach its campaign leading up to the election. He said the group’s goal will be to inform the public on both sides of the issue. While he doesn’t deny some of the benefits of an independent district, Dalby said the possible burden on industry that increased taxes would bring needs to be considered.

“None of us are necessarily against the whole idea in general, we just think it’s the wrong time to do it,” Dalby said.

Uncertainty in the energy industry, a presidential administration opposed to fossil fuels and the expected decline in assessed valuation in Campbell County have led some to question the timing of the decision.

A common refrain from those either opposed to the new district or questioning its need is that this issue is actually just about athletics.

The ongoing push for a new community college district began last June when the NWCCD decided without notice to cut sports programs throughout the district, other than rodeo, and also dropped the award-winning Energy City Voices choral group. 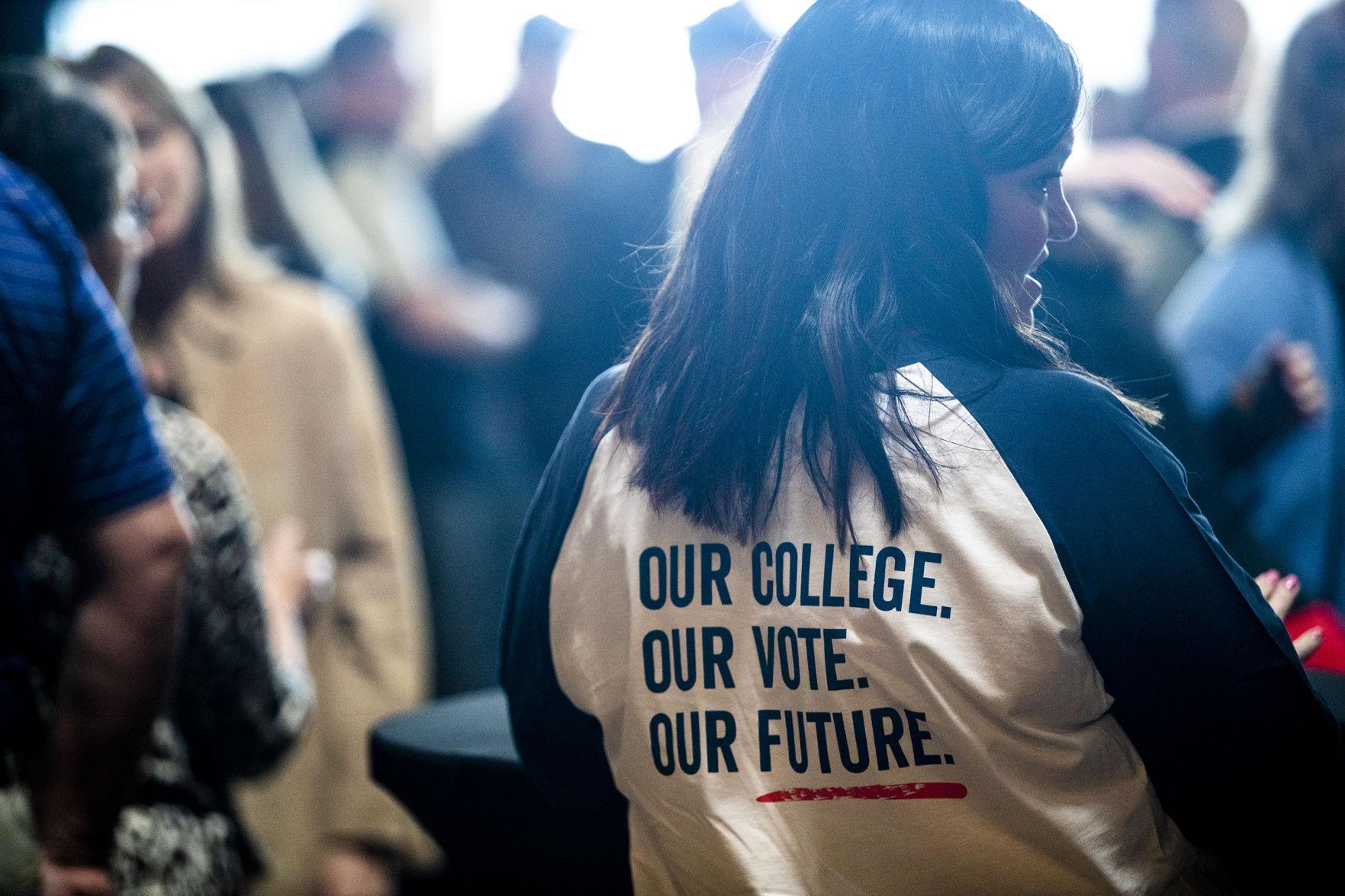 At the time, a Campbell County contingent pooled resources to fund sports at Gillette College through the 2020-2021 school year while using the borrowed time to devise a more sustainable long-term plan to keep the local sports programs going.

After busloads of Campbell County residents went to Sheridan for a NWCCD board of trustees meeting shortly after the cuts were announced, the board took public comment but would not consider the Campbell County plan and ultimately stuck with the decision to end the sports programs at Gillette and Sheridan colleges.

From there, the ball got rolling quickly. A task force was created in Campbell County to push for an independent district. Its application made it through the Wyoming Community College Commission and Wyoming State Legislature, with its next hurdle being the special election in August.

But for opponents of the push for a new district, as further evidenced by comments from legislators throughout the state made while the bill worked its way through the Legislature, the movement’s origins around sports leads some to believe restoring athletics is the No. 1 goal of the effort.

“It’s all about sports. I don’t care if they say that it’s not. That’s what it boils down to. I’m not in it for the sports,” Dalby said. “It needs to be all about the schooling, and I just don’t see that that’s the real cause.”

Dalby also said that the process has been rushed, giving people such as himself little time to focus on the issue ahead of the special election.

The cost of autonomy

During the Vote Yes for Gillette College Kick-off last week, Josh McGrath, who is a member of the Gillette College Advisory Board, said that only someone who is “anti-tax” or “anti-control” would vote against the new district.

The outcome of the election will show how many in the community take that stance.

While the ballot language will ask voters to approve or deny up to 4 mills of tax to fund a new community college district, those who have championed the idea have maintained that while it could have the authority to tax that much, it likely wouldn’t need to. 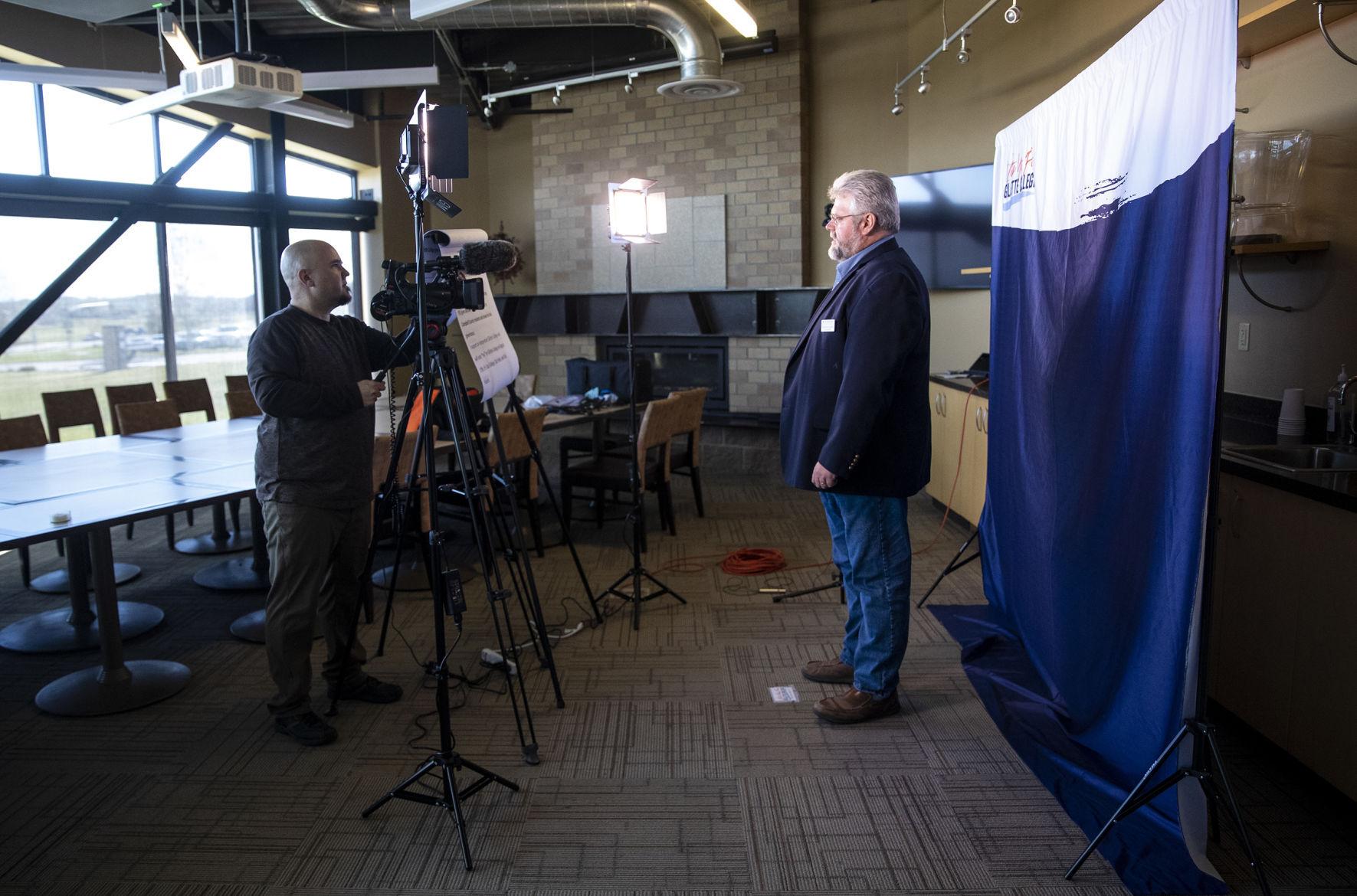 Somewhere in the neighborhood of 2 mills has been estimated as the cost for a new district, but that decision will ultimately be made by the seven elected trustees, who would have control over how many mills are taxed. The new district would have to levy all 4 mills to receive state funding, which also is something those pulling for the new district have said they would not do.

Hladky said that based on past budget cycles and similar community colleges, the annual budget for a new district could be in the $12 million to $14 million range.

He said that after tuition and fees, the half-mill received by the Board of Cooperative Higher Education, or BOCHES, would cover a fair part of the district’s budget.

From there, 2 mills, at an expected value of about $3.6 million each, should cover the remaining balance, he said.

If the independent district is approved, the newly elected trustees will “have some heavy lifting,” he said about determining a budget and guiding the district through accreditation, which could take from three to five years.

During that stretch, Gillette College would remain part of the NWCCD while the accreditation process proceeds.

For the next few months, the fate of Gillette College and its supporters’ pursuit of self-determination continues to hang in the balance.

“It’s about local governance,” Hladky said. “If we believe that the seven trustees in Sheridan are going to have Gillette’s best interest in mind, we’re going to be sadly mistaken.”

* Trustee filing period: May 19 through June 8 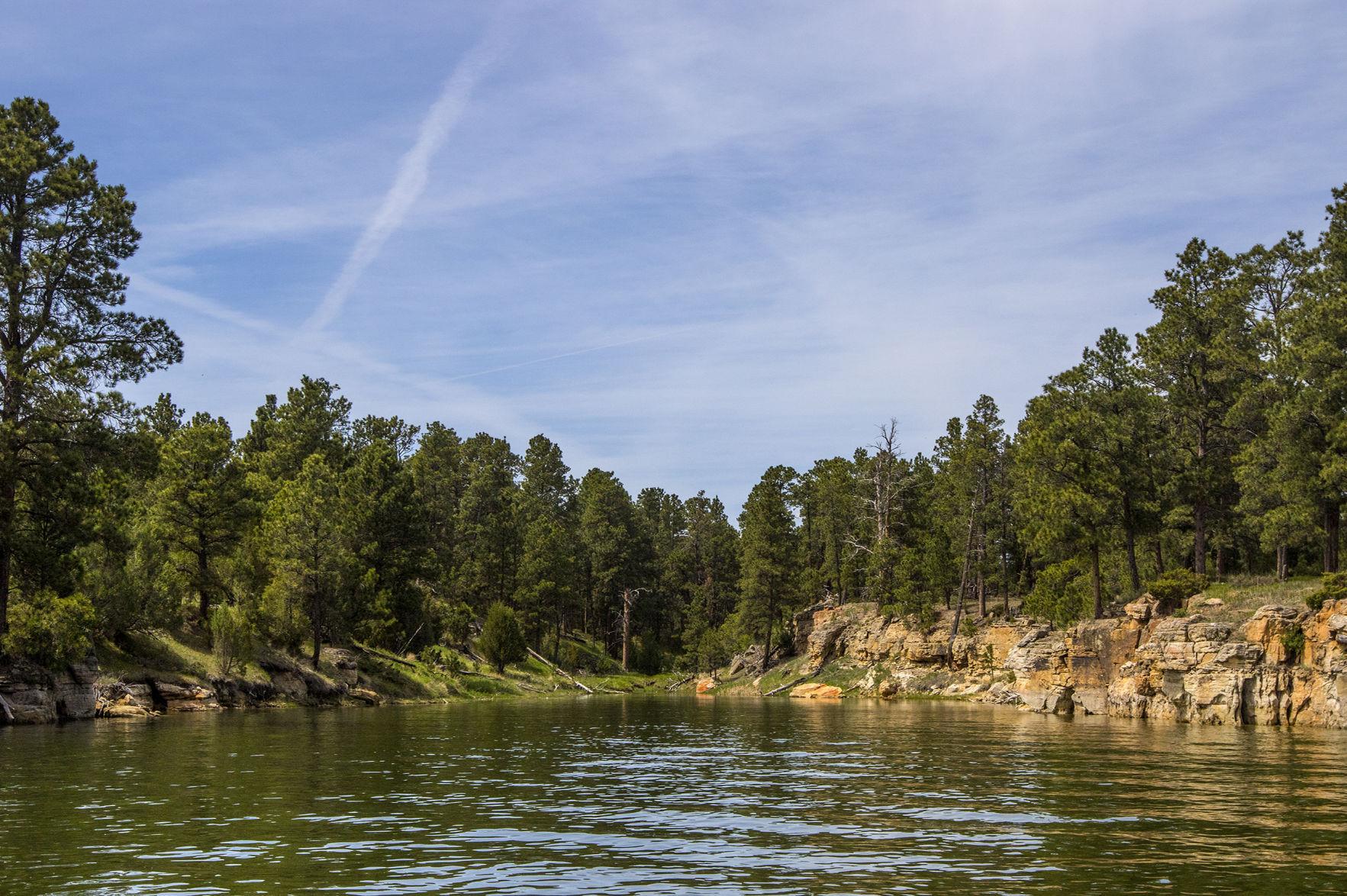 A view from the water at Keyhole Reservoir shows one of the many inlets around the edges of the lake. After developing some toxic algae blooms last summer and again over the winter, the reservoir has recovered and is ready for visitors.

The city of Gillette is anticipating its Optional 1% Sales tax collections will take a large dip in the next fiscal year.

Instead of proposing projects based on anticipated revenues, only projects for which there is existing money on hand will be approved, according to the city’s preliminary budget.

The city needs to prioritize what projects it can do, and with the decline in sales tax revenues “those choices are becoming more and more difficult,” said Finance Director Michelle Henderson.

Along with the 1%, the city looked at other department budgets at Wednesday’s third and final budget workshop of the year.

The streets department’s budget is looking at a 5% reduction from about $3.09 million in 2020-21 to $2.93 million in 2021-22. The biggest drop would come in the department’s materials and supplies, which would go from $1.63 million to $1.5 million. Under this umbrella are items that include repairing concrete slabs and manholes, crack sealing and filling and vehicle maintenance.

“We are doing our best to manage this and forecast it,” said city water manager Howard Jones.

There will be three readings on the proposed budget starting June 1. If it gets approved, it will go into effect July 1.

“It’s a great budget,” Mayor Louise Carter-King said Wednesday night. “It’s just sad that we had to cut so much, but we did it.”