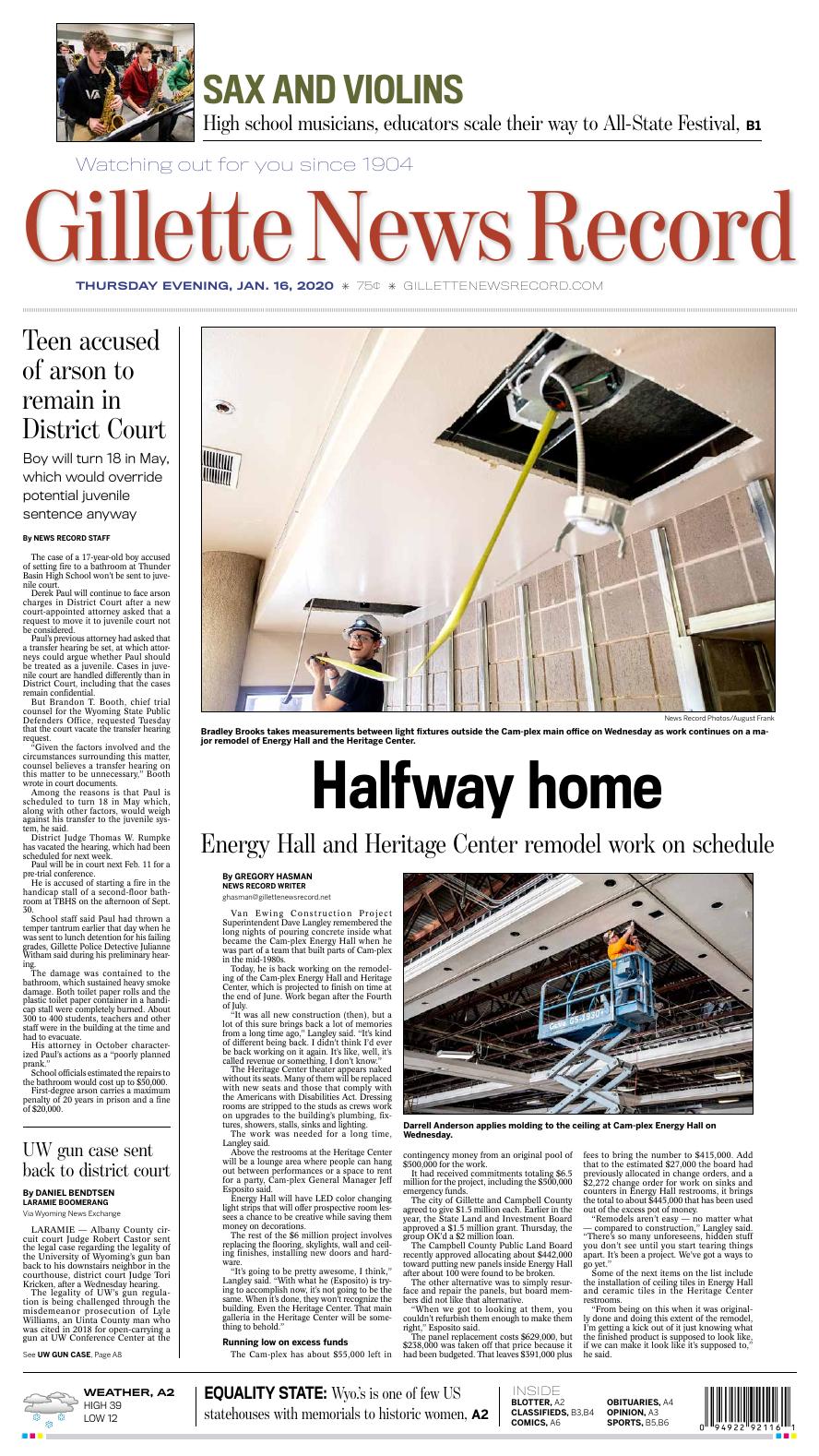 Bradley Brooks takes measurements between light fixtures outside the Cam-plex main office on Wednesday as work continues on a major remodel of Energy Hall and the Heritage Center.

Dave Langley discusses his experiences building the original Cam-plex facilities in the mid-1980s. He is now back working on remodeling of the same buildings he helped build.

Darrell Anderson applies molding to the ceiling at Cam-plex Energy Hall on Wednesday.

A site that won't be seen after remodeling efforts wrap up, the Heritage Center Theater sits absent of any seats on Wednesday.

Jeff Esposito looks over one of the new lights being installed in the Heritage Center on Wednesday as part of remodeling projects at Cam-plex.

Jeff Esposito discusses remodeling of the Heritage Center on Wednesday. New bathrooms, an elevated lounge and new lighting will be among the new features of the remodeled Heritage Center.

Workers put molding along ceiling crevices in Cam-plex Energy Hall. The hall is about halfway through it's remodeling.

Large circles and semi-circles constructed to be placed in the center lobby ceiling of the Heritage Center sit out waiting to be used. The large pieces were put together like an erector set to precise measurements to ensure they would fit in the ceiling.

Van Ewing Construction Project Superintendent Dave Langley remembered the long nights of pouring concrete inside what became the Cam-plex Energy Hall when he was part of a team that built parts of Cam-plex in the mid-1980s.

Today, he is back working on the remodeling of the Cam-plex Energy Hall and Heritage Center, which is projected to finish on time at the end of June. Work began after the Fourth of July.

“It was all new construction (then), but a lot of this sure brings back a lot of memories from a long time ago,” Langley said. “It’s kind of different being back. I didn’t think I’d ever be back working on it again. It’s like, well, it’s called revenue or something, I don’t know.”

The Heritage Center theater appears naked without its seats. Many of them will be replaced with new seats and those that comply with the Americans with Disabilities Act. Dressing rooms are stripped to the studs as crews work on upgrades to the building’s plumbing, fixtures, showers, stalls, sinks and lighting.

The work was needed for a long time, Langley said.

Above the restrooms at the Heritage Center will be a lounge area where people can hang out between performances or a space to rent for a party, Cam-plex General Manager Jeff Esposito said.

Energy Hall will have LED color changing light strips that will offer prospective room lessees a chance to be creative while saving them money on decorations.

The rest of the $6 million project involves replacing the flooring, skylights, wall and ceiling finishes, installing new doors and hardware.

It had received commitments totaling $6.5 million for the project, including the $500,000 emergency funds.

The city of Gillette and Campbell County agreed to give $1.5 million each. Earlier in the year, the State Land and Investment Board approved a $1.5 million grant. Thursday, the group OK’d a $2 million loan.

The Campbell County Public Land Board recently approved allocating about $442,000 toward putting new panels inside Energy Hall after about 100 were found to be broken.

The other alternative was to simply resurface and repair the panels, but board members did not like that alternative.

“When we got to looking at them, you couldn’t refurbish them enough to make them right,” Esposito said.

“Remodels aren’t easy — no matter what — compared to construction,” Langley said. “There’s so many unforeseens, hidden stuff you don’t see until you start tearing things apart. It’s been a project. We’ve got a ways to go yet.”

Some of the next items on the list include the installation of ceiling tiles in Energy Hall and ceramic tiles in the Heritage Center restrooms.

“From being on this when it was originally done and doing this extent of the remodel, I’m getting a kick out of it just knowing what the finished product is supposed to look like, if we can make it look like it’s supposed to,” he said.

Local
top story
Teen accused of arson to remain in District Court
Boy will turn 18 in May, which would override potential juvenile sentence anyway
By News Record Staff
01.16.20

The case of a 17-year-old boy accused of setting fire to a bathroom at Thunder Basin High School won’t be sent to juvenile court.

Derek Paul will continue to face arson charges in District Court after a new court-appointed attorney asked that a request to move it to juvenile court not be considered.

Paul’s previous attorney had asked that a transfer hearing be set, at which attorneys could argue whether Paul should be treated as a juvenile. Cases in juvenile court are handled differently than in District Court, including that the cases remain confidential.

“Given the factors involved and the circumstances surrounding this matter, counsel believes a transfer hearing on this matter to be unnecessary,” Booth wrote in court documents.

Among the reasons is that Paul is scheduled to turn 18 in May which, along with other factors, would weigh against his transfer to the juvenile system, he said.

District Judge Thomas W. Rumpke has vacated the hearing, which had been scheduled for next week.

Paul will be in court next Feb. 11 for a pre-trial conference.

He is accused of starting a fire in the handicap stall of a second-floor bathroom at TBHS on the afternoon of Sept. 30.

School staff said Paul had thrown a temper tantrum earlier that day when he was sent to lunch detention for his failing grades, Gillette Police Detective Julianne Witham said during his preliminary hearing.

The damage was contained to the bathroom, which sustained heavy smoke damage. Both toilet paper rolls and the plastic toilet paper container in a handicap stall were completely burned. About 300 to 400 students, teachers and other staff were in the building at the time and had to evacuate.

His attorney in October characterized Paul’s actions as a “poorly planned prank.”

School officials estimated the repairs to the bathroom would cost up to $50,000.

First-degree arson carries a maximum penalty of 20 years in prison and a fine of $20,000. 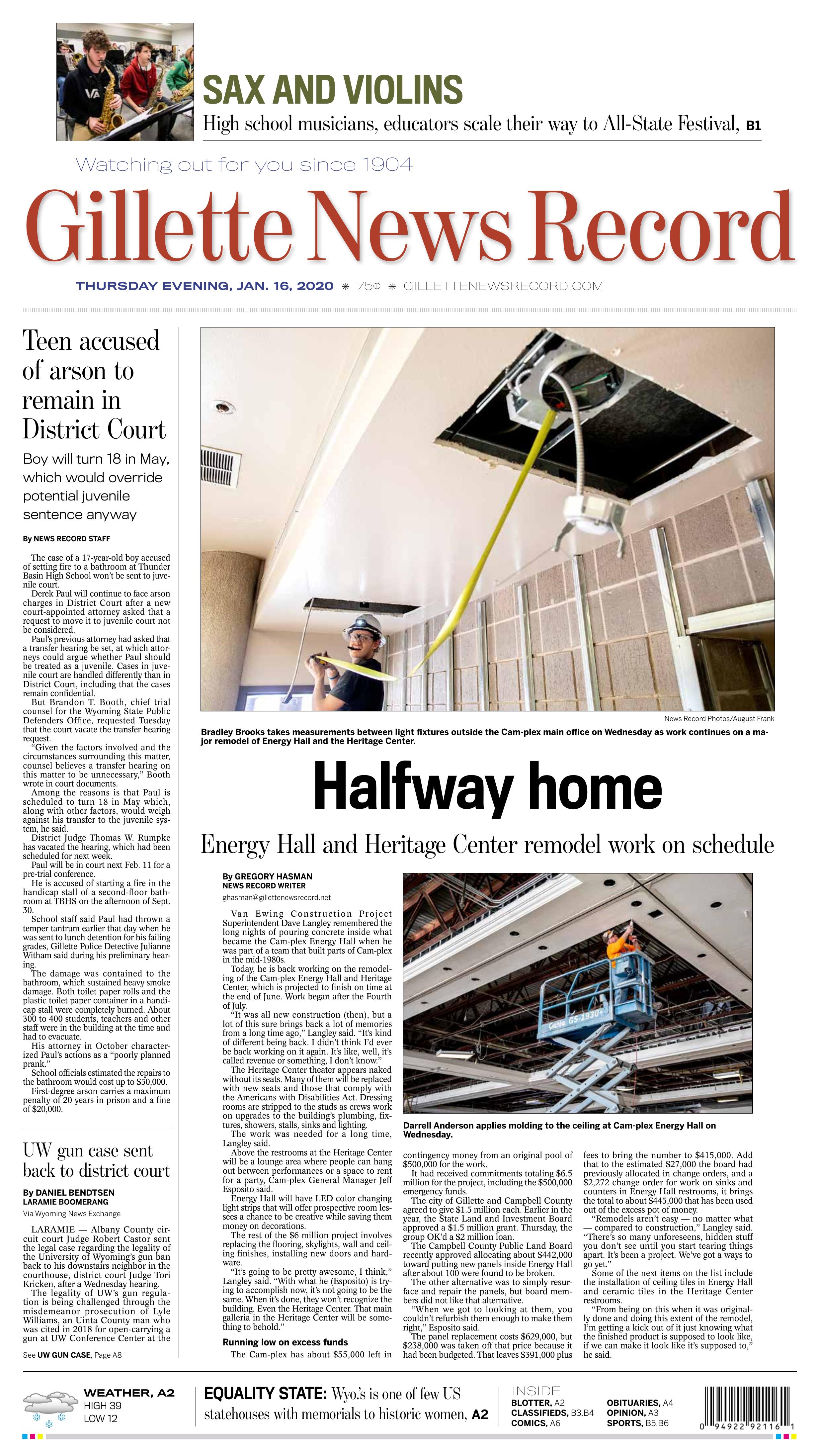