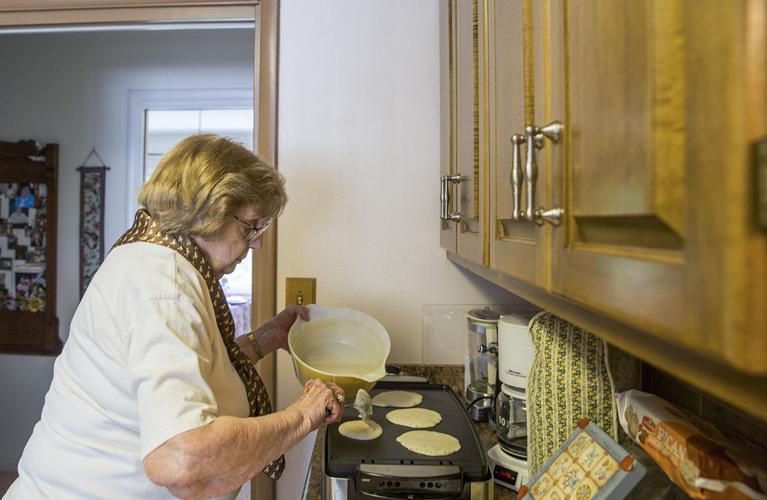 Lucille Dumbrill makes pancakes in her home using sour dough starter on Monday afternoon. The starter dates back to a sheepherder’s wagon in the Kaycee area in 1889. 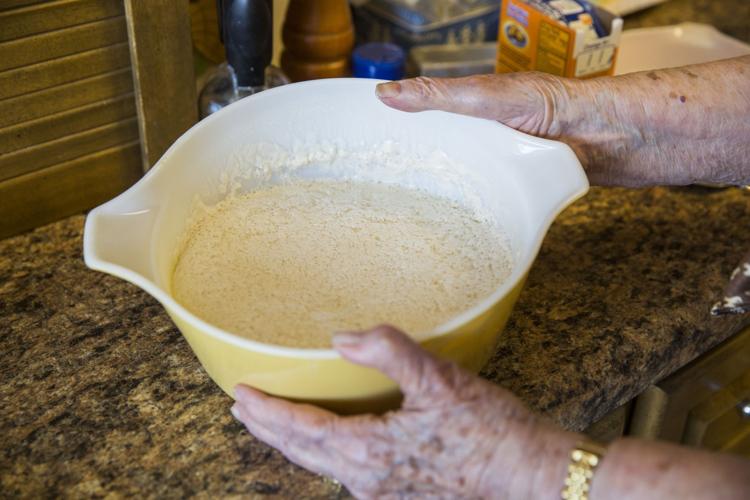 Lucille Dumbrill gets her sour dough starter ready to make pancakes in her home in Newcastle on Monday afternoon. 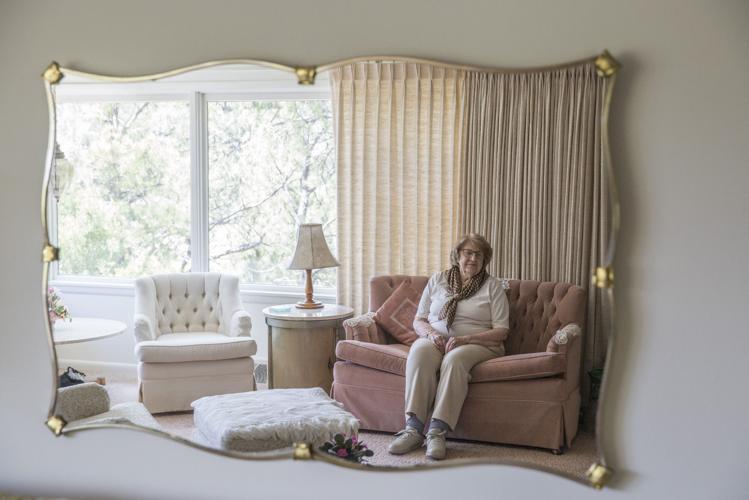 Lucille Dumbrill in her home in Newcastle, Wy., on Monday afternoon. 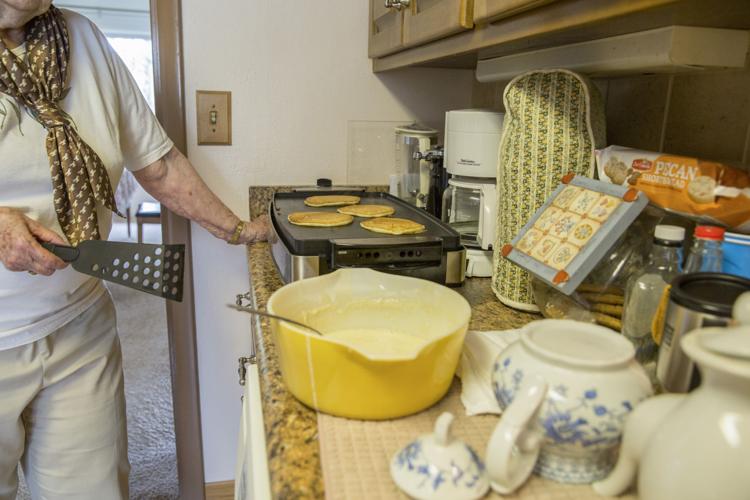 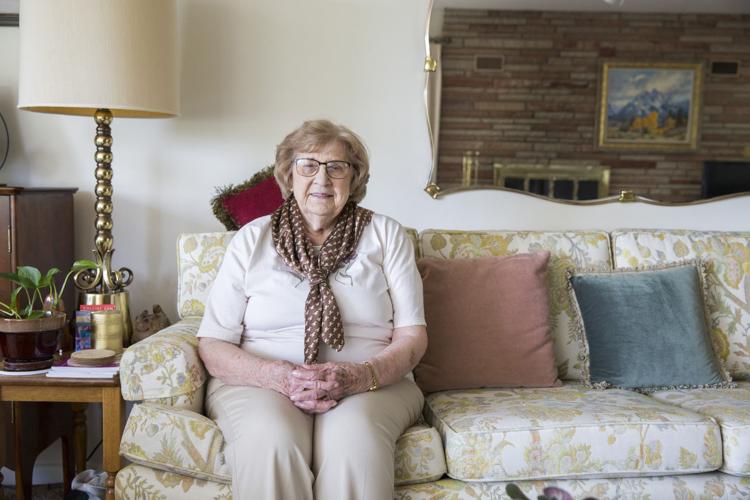 Lucille Dumbrill in her home in Newcastle on Monday afternoon. 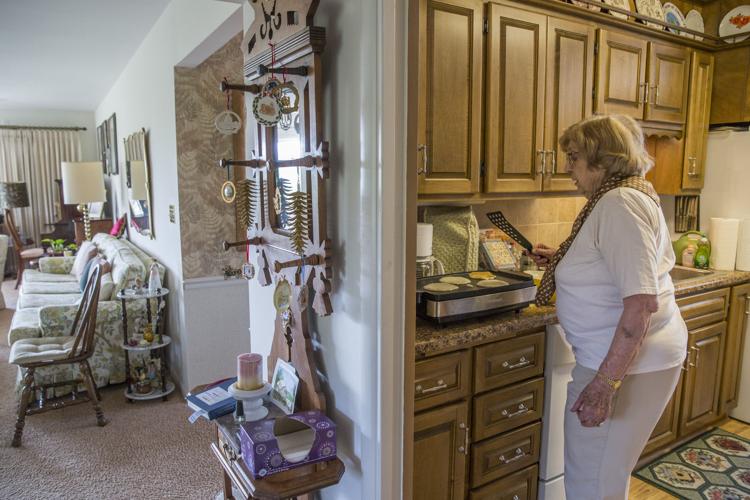 Lucille Dumbrill makes pancakes in her home using sour dough starter she first received from her mother on Monday afternoon.

Lucille Dumbrill makes pancakes in her home using sour dough starter on Monday afternoon. The starter dates back to a sheepherder’s wagon in the Kaycee area in 1889.

Lucille Dumbrill gets her sour dough starter ready to make pancakes in her home in Newcastle on Monday afternoon.

Lucille Dumbrill in her home in Newcastle, Wy., on Monday afternoon.

Lucille Dumbrill in her home in Newcastle on Monday afternoon.

Lucille Dumbrill makes pancakes in her home using sour dough starter she first received from her mother on Monday afternoon.

Like every mother, it sits and stews, but each time it is needed, it gives and nourishes those around it.

A sourdough starter, also called a mother, is a bubbling, breathing mound of wild yeast and bacteria. With proper love and attention, mothers can live a long time, and they often have mythic, legendary histories.

The story goes that long ago when a woman was getting married, her mother would send her off with a piece of her dough. That “mother” became a family heirloom, passed from generation to generation, a lifeline in every loaf.

When it comes to pancakes in northeastern Wyoming, Lucille Clarke Dumbrill, 89, has one with a history all its own.

Dumbrill might have one of the oldest sourdough starters, dating back to a sheepherding wagon from Kaycee in 1889, that means it’s 128 years old — older, in fact, than the state of Wyoming itself by one year.

The Newcastle woman got it from her mother, who got it from one of her husband’s students at the University of Wyoming in the 1950s.

“That’s a long time to keep it going,” said Dumbrill. “I’m sure it’s not the same starter, because it progresses just like generations of people. It’s a descendant.”

The starter, or pieces of it, have given parts of itself to Dumbrill’s children, cousins, family friends and has actually gone all over the world.

“I’ve given it away to a lot of people,” Dumbrill said. “I feel that’s what it’s about, to share.”

When she won a Wyoming State Historical Society Award for her starter in 2011, the starter got quite a bit of publicity. She got calls and letters from all over the country and the world asking for a piece of it.

So she dried some flakes of starter and sent it all over the world in an envelope.

Everything old is new again

Ironically, sourdough starters are making a comeback in food trends. Between the health benefits of the “fermented food” and the idea that everything-old-is-new, twenty-somethings are starting their own sourdough mothers.

“You can kill it, but it’s not easy,” laughed Debbie McLeland, Dumbrill’s daughter, who has a starter in her refrigerator. “It’s not delicate. It won’t handle heat or being frozen, but it can dry itself out and get crusty and it still works.”

In all the years they’ve had the starter, there have only been a few times that it’s almost died.

There isn’t much care needed for the starter. It doesn’t need to be fed every day or even every week. The jars sit in refrigerators waiting to be used.

And the smell? That’s another story.

“They don’t call it sourdough for nothing,” she said. “It has a distinctive sourdough smell. It’s all the yeasty bugs that produce the gas that makes the smell kind of like alcohol.”

In fact, if you stick your nose inside a jar filled with starter, it’s like you’re inside a wine cave. Your head gets dizzy with the musty, sour sweetness of fermenting grapes.

Simply put, the yeasts break down the flour into sugars and carbon dioxide. The bacteria ferment those sugars to make acid, creating a pleasantly sour flavor. Starters’ textures can range from dough-like to batter-like and are the color of whatever flour the baker uses.

It’s those acids and alcohols that make the flavor and texture in the bread — or in Dumbrill’s case — pancakes.

When baking for guests, the starter is taken out of the fridge a couple of days ahead of time. Only a half cup to one cup of starter is taken out and is fed with flour, sugar and water to make more batter. Before the eggs, oil and sugar are added, another half cup to one cup of batter goes back in the jar and back in the fridge.

Some people are careful with which order the ingredients are added and carefully measure while others just dump it in.

McLeland admits she both measures and dumps ingredients in. The initial feeding of the starter has to be careful because it needs the right amount of sugar.

“Each time we have pancakes, it’s a little different,” she said.

In fact, according to Serious Eats, even if the recipe is the same, regional changes will affect the yeast and beneficial bacteria strains grown in the dough.

A sourdough made in Southern California will have subtle variations in texture and flavor to those made in New York, London, Paris and around the world.

Instead of cocktails, they served pancakes.

They served pancakes to guests with whipped cream, fruit and a variety of syrups: maple, blueberry, chokecherry. Some pancake parties were small and one time they entertained 90 people.

“It was a friendly way to entertain,” Dumbrill said. “The conversations were always about Wyoming, its history and sourdough starters.”

Just like her mother, McLeland has entertained with pancakes for decades. She fed her three sons’ track and cross-country teams and has spread the pancake love for many other events, including a pancake breakfast for this year’s track team next week before state.

Her fondest memories were staying with her grandmother in Laramie over the weekend and waking up to warm pancakes or eating them in Jackson Hole when her father worked in the Grand Teton National Park for a summer.

To make your own sourdough starter, visit http://tinyurl.com/kcne27y.