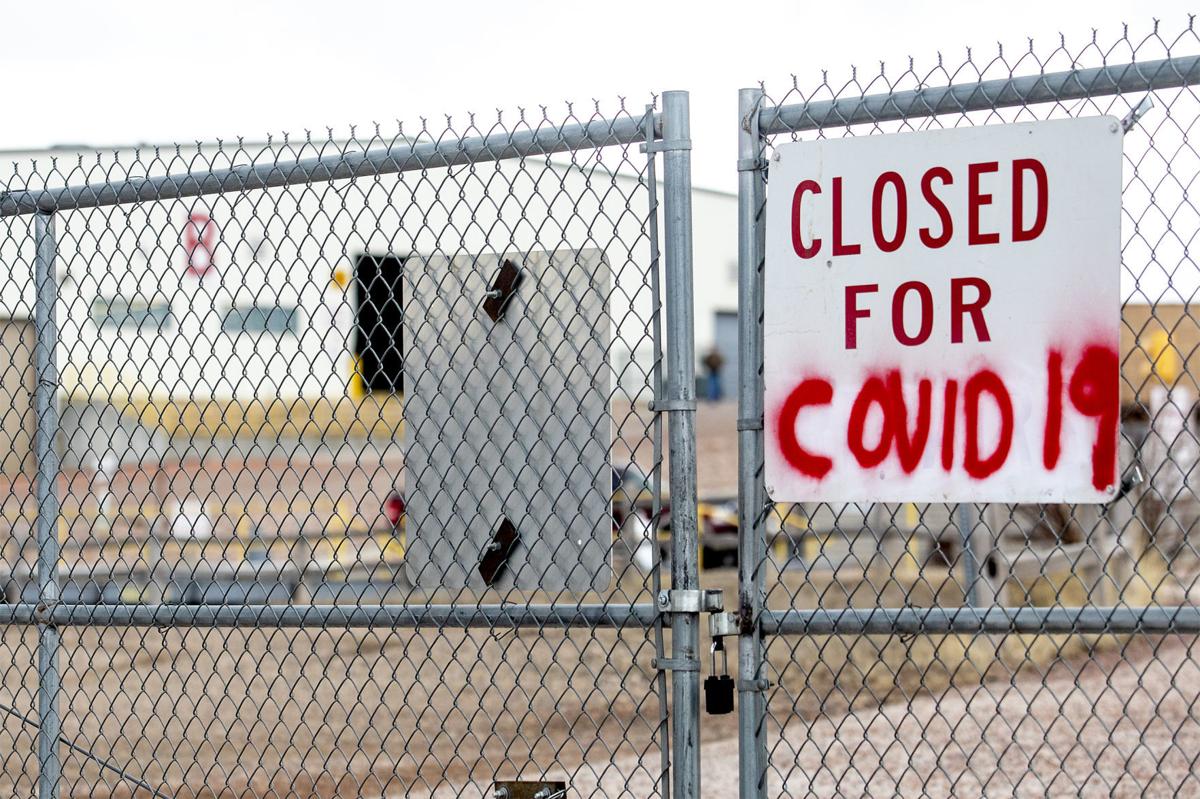 A sign at the CARE Recycling Center on Westover Road reads “closed for COVID19,” reflecting that Campbell County has temporarily shut the center as a measure to help stem the spread of the coronavirus. The county also has closed the North Landfill to residential customers, although commercial haulers will still be allowed in. 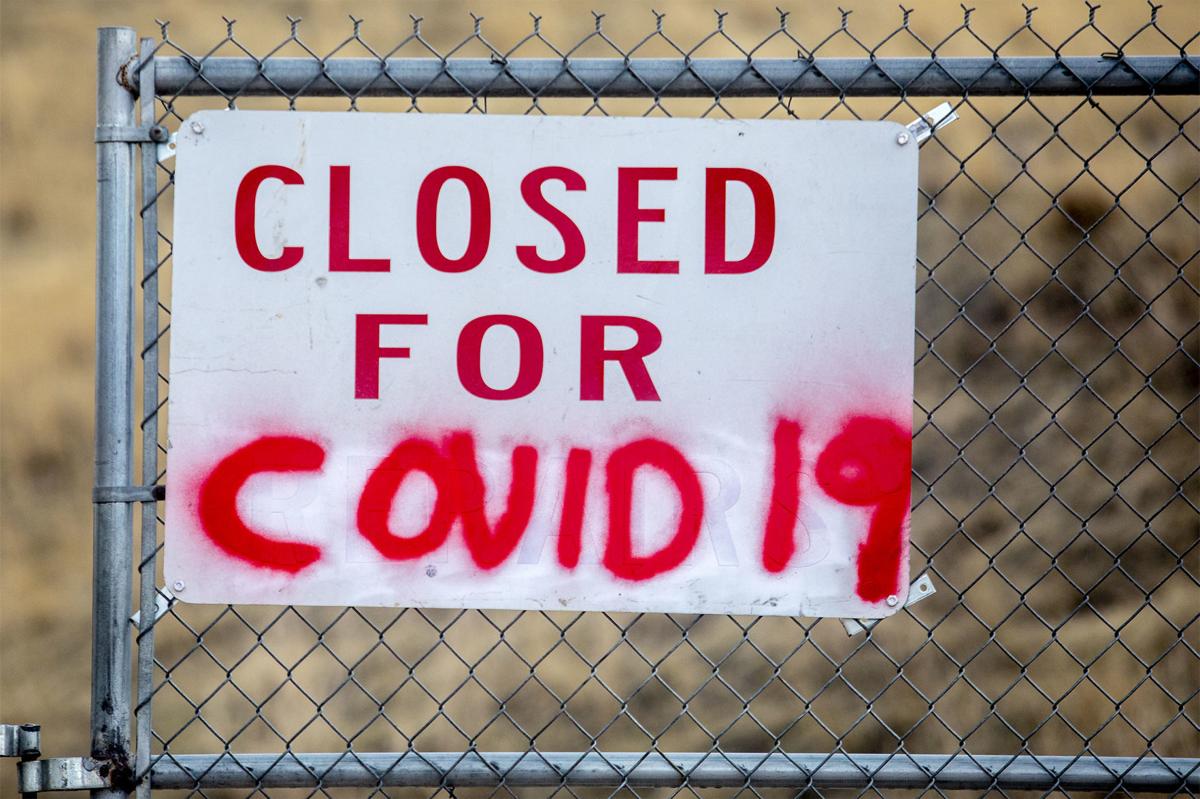 A sign at the Campbell County Recycling Center reads "closed for COVID19." 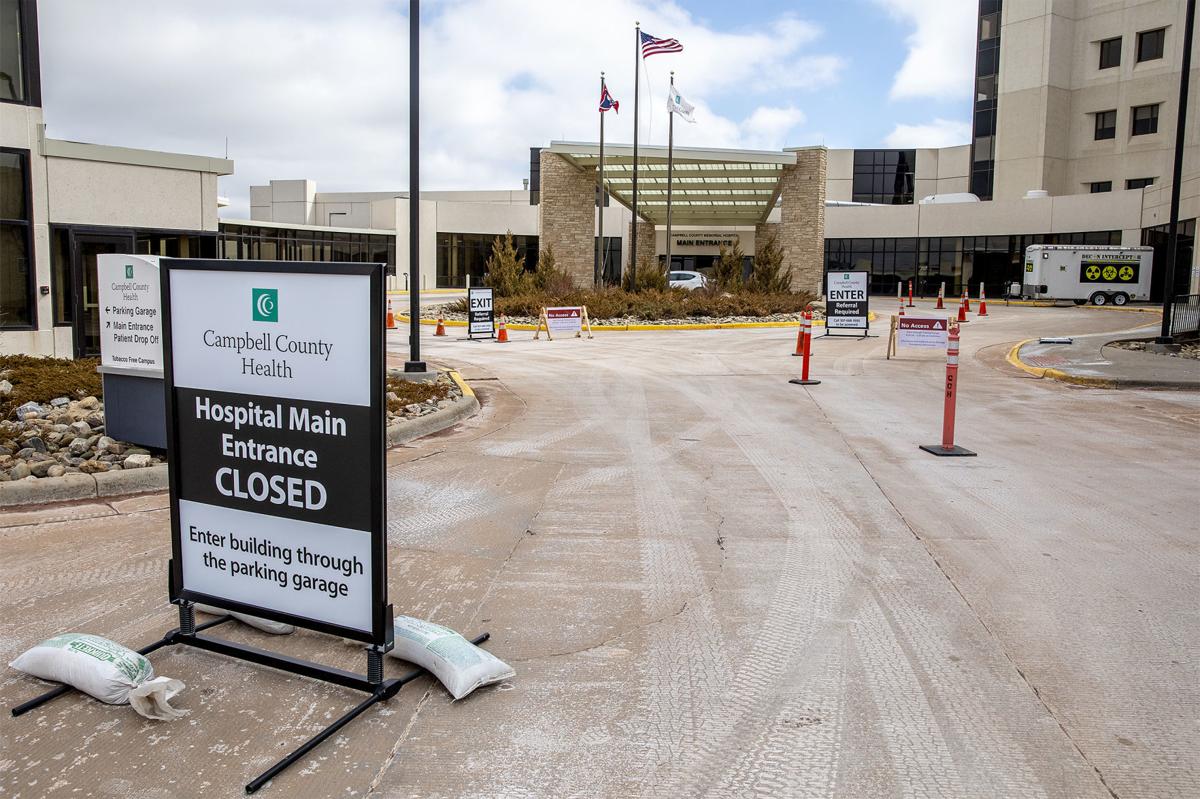 The main entrance to Campbell County Memorial Hospital is closed to visitors and also serves as the local site for COVID-19 screenings, which are done by appointment.

A sign at the CARE Recycling Center on Westover Road reads “closed for COVID19,” reflecting that Campbell County has temporarily shut the center as a measure to help stem the spread of the coronavirus. The county also has closed the North Landfill to residential customers, although commercial haulers will still be allowed in.

A sign at the Campbell County Recycling Center reads "closed for COVID19."

The main entrance to Campbell County Memorial Hospital is closed to visitors and also serves as the local site for COVID-19 screenings, which are done by appointment.

Gov. Mark Gordon continues to plead with Wyomingites to stay home to help curb the spread of the novel coronavirus, even as some state residents balk at a raft of emergency orders that have basically shut down public places and nonessential services.

The orders that limit gatherings of people to fewer than 10 are now voluntary, but Gordon said that could change if people ignore directives to social distance and only go out when absolutely necessary.

“We are not trying to shut down Wyoming, but your voluntary actions and discipline … will make a difference in Wyoming for you, your family and your neighbors,” the governor said during a Wednesday afternoon update about state efforts to contain the COVID-19 pandemic.

“I am doing my best to avoid a shelter-in-place order,” Gordon said.

If forced, however, the governor said he’s prepared to not only make that decision, but enforce it.

“If we have to issue that order, we will and we do have the means to enforce that, either through law enforcement or others,” Gordon said. “Hopefully, the good wisdom of Wyoming citizens being asked to do so (is enough). We are trying to avoid that unless absolutely necessary.”

Maintaining public health in communities across the state while doing as much as possible to make sure “Wyoming stays at work” are his top priorities, Gordon said.

“Our efforts have been designed to do our best to flatten the curve, and it’s absolutely essential we flatten our curve by staying home, making sure we do social distancing and practice good hygiene,” he said. “This is an incredibly challenging time for our state and our nation. I am confident we are going to get through this.”

The importance of social distancing goes along with not taxing local health care workers and first responders, he said. That’s because in a rural state, there aren’t enough workers and hospital beds to treat things that aren’t emergencies.

“If we see a surge of cases, we could see our health care providers be overwhelmed with patients,” Gordon said, adding that if those workers are themselves infected, it takes them out of the picture of treating others.

While schools have had extended breaks scheduled through April 3, the COVID-19 danger won’t be over by that time.

“We all know that,” Gordon said while explaining that an update on whether to start public schools again or recommend other options will come in the next couple of days.

Asked if public school shutdowns could be extended beyond April 3, Gordon said “there’s a likelihood” of that and state officials “are reviewing that now.”

The challenge there is making sure all of the state’s school districts are on the same page and that there’s a plan in place to continue the education of Wyoming students and making sure high school seniors can graduate, he said.

Also, while the state has increased its ability to test for the coronavirus at the Wyoming Public Health Laboratory in Cheyenne by “tenfold,” Gordon said there is still a shortage of supplies for doing the test in Wyoming and nationwide.

The state has a limited supply of test kits for each county and 2,650 of them will be distributed by the end of this week and a priority system has been established for using the tests.

Other more populous states have ordered more than 100 million people across the United States to not leave their homes. Gordon said his goal is to avoid that in Wyoming.

He said the threat posed by the coronavirus “will be addressed the Wyoming way, the proper way.”

The count of confirmed cases of COVID-19 in Wyoming has grown to 53 and includes positive test results in 11 of the state’s 23 counties.

As the Wyoming Public Health Laboratory in Cheyenne becomes more efficient and expands to complete more tests, the number of positive cases also is accelerating. The new tally includes 35 cases confirmed in the last week.

Through Thursday morning, the Wyoming Department of Health reports that its lab has completed 865 tests for the novel coronavirus, that it’s received results from 239 commercial lab tests and that the Centers for Disease Control and Prevention has done one test for the state.

With 14 confirmed cases, Fremont and Laramie continues have the most in Wyoming, followed by Teton County with seven and Natrona County with six.

The Wyoming Department of Health also reports that 12 of the 53 positive cases have recovered and there have been no cororavirus-related deaths in the state so far.

In Campbell County, there has been one confirmed COVID-19 case, announced Friday in an adult woman who is not hospitalized.

The state lab has so far completed 110 tests and has 15 tests still awaiting results for Campbell County patients.