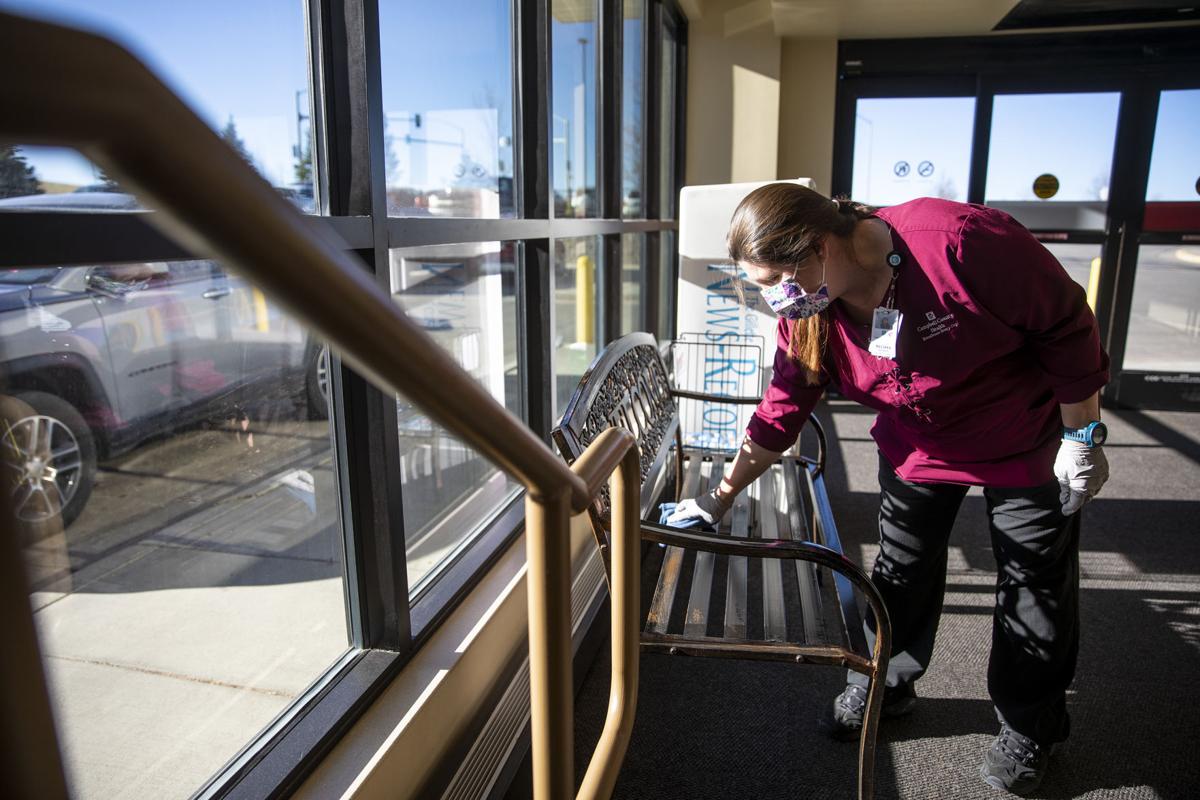 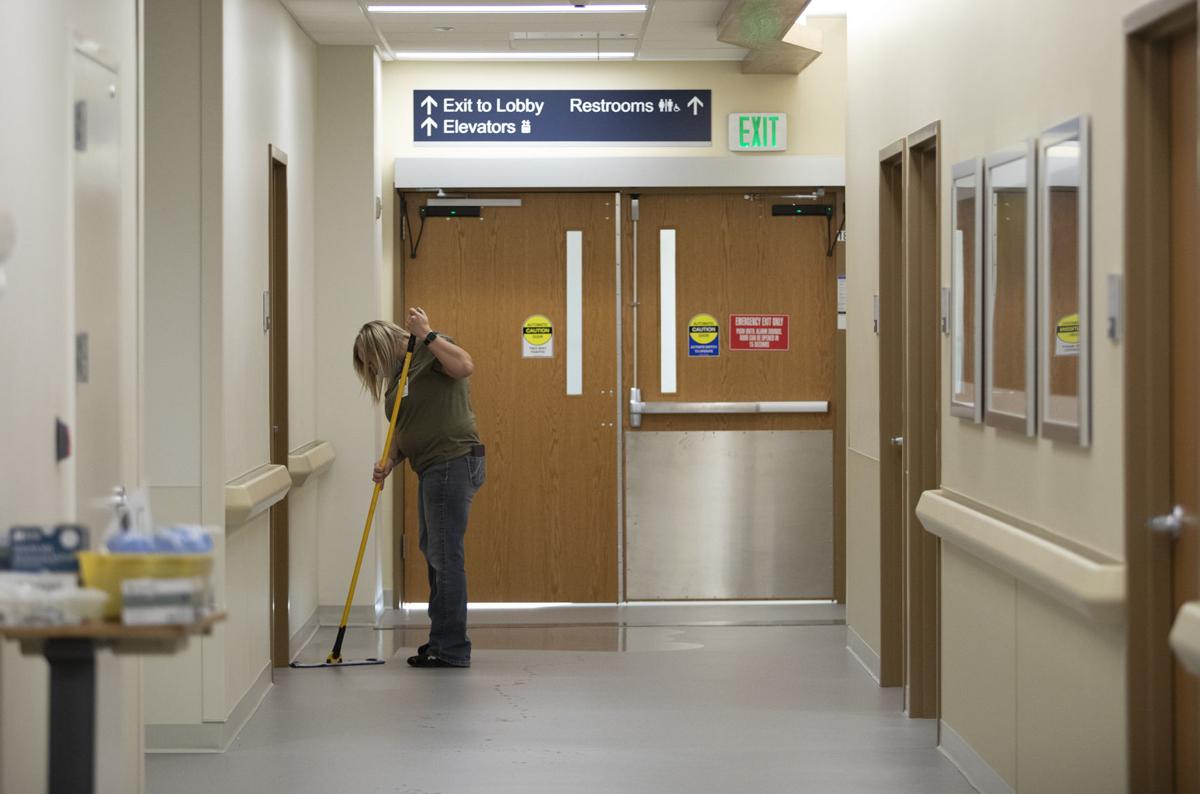 Taya Teacher, who was one of many National Guard workers brought in to aid Campbell County Memorial Hospital during the pandemic, mops a hallway of the medical/surgical wing Friday morning. 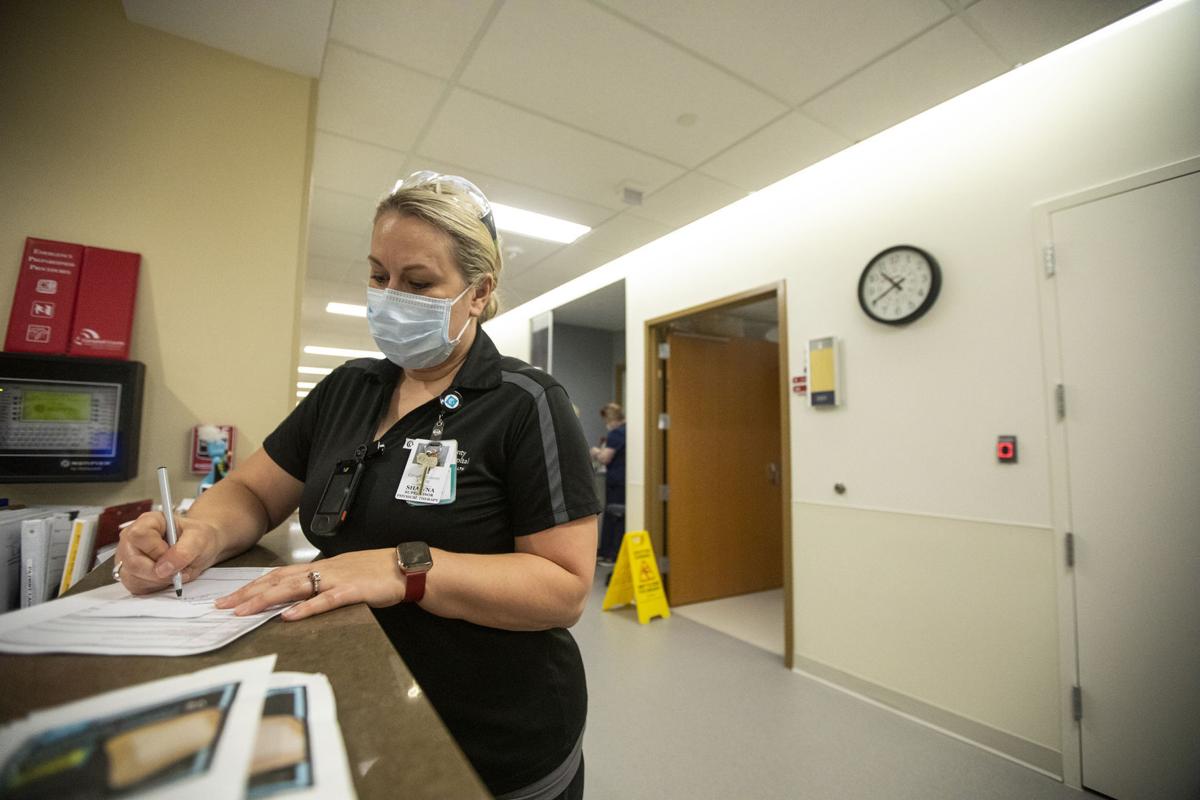 The most obvious and norm-altering affects of the COVID-19 pandemic may already have passed for many people in Campbell County. Looking around the community, life may seem ordinary once again.

But that isn’t the case within Campbell County Health, where the local health care system and its weary employees care for the continuous wave of inpatients while having less staff and wherewithal to deal with it.

The pandemic is taking a toll on the employees who staff the hospital you may depend on. So, be kind.

That was the message penned by hospital board chairman Adrian Gerrits in a letter to the editor featured on Page A3 today.

The pandemic created an ongoing crisis within CCH.

“People have no idea how prevalent COVID is right now and how sick people are in our hospital,” said Dr. Sara Hartsaw, a surgeon and hospital board trustee, at last week’s board retreat.

The number of COVID-19 patients began increasing steadily in mid-summer and climbed to as many as 25 patients being treated for COVID-19 in the hospital on Oct. 26, according to the Wyoming Department of Health.

That increase came in addition to the typical volume of inpatients.

The hospital usually has 20 to 25 inpatients, but has seen as many as 55 inpatients in recent months, Tate said. On top of the increased workload, there are fewer workers in place to handle it.

“Beaten up” has taken on a literal sense, as security and law enforcement have had to intervene when patients have gotten out of line with CCH employees.

“There’s violence happening,” CCH interim CEO Jerry Klein said. “In the hospital and the Legacy (Living and Rehabilitation Center). Everything from patients or patient families, etc. There are serious issues occurring. To where you have violent outbursts, security is involved, sometimes the police are involved. You just don’t typically see that. We’re seeing that every day and Legacy’s having the same problems as well.”

As the faucet of new patients continued to drip, CCH began running out of buckets.

Even with the increased room for inpatients, the Emergency Department — the point of contact for many sick patients needing inpatient care — became overrun. An additional hospitalist was scheduled to work in the emergency room and care for the ER holds, or the patients admitted but without a hospital bed to transfer to.

“The emergency room was overrun,” Klein said. “You had patients sitting in — beds cots, whatever in the hallways. You had admissions backed up six, seven, eight deep at times. In all fairness to the patients we serve, that’s not taking good care of them.”

To help cover the extra work needed in various departments that are dealing with staffing shortages in their own right, “Pandemic pay” has been offered to CCH employees.

Pandemic pay gives employees the chance to pick up extra shifts, in addition to their regular 40 hours, at a 1.5 times pay rate with additional bonuses given per shift, determined by their base pay rate.

This year, there are a dozen or so National Guard members helping out, but mostly in a non-clinical capacity. While that help is needed and appreciated, Klein said there is still need for medical personnel.

Traveling personnel are now going for about $190 per hour, whereas they used to cost about $65 hourly, Tate said. The pandemic pay cost CCH an additional $1 million in additional nursing wages, but Tate said it still cost less than the cost of bringing in travelers at the inflated rate.

In an effort to shift hospital resources to the influx of inpatients, CCH suspended all elective inpatient and outpatient surgeries. The hospital still will perform emergency surgeries when necessary. The status of elective surgeries is to be evaluated on a weekly basis going forward.

It will remain closed at least through next week, Tucker said.

The decision to cut a profitable service line for the hospital did not come easy, but rather, out of necessity, Klein said.

Every department was evaluated and it was determined that only the surgical department had enough employees to reallocate as needed, he said.

“Believe me, there was a lot of discussion about that because we knew we were shutting down a revenue stream that’s important to us,” Klein said.

A more formal incident command team consisting of representatives from various CCH departments was reassembled in recent weeks to respond to and plan for the demand in inpatient services at the hospital.

Tucker said that a lot was learned from last autumn’s wave of patients. Now that they are dealing with another prolonged wave, with less staffing reinforcements, the incident command team has helped CCH leadership gauge the status of various departments and adapt as needed.

“We feel more in control of an uncontrollable situation than we ever have, during the span,” Klein said.

The demand from COVID-19 patients headed into winter remains to be seen, but the health care organization is bracing for another threat.

Tucker said that CCH has been warned by the state of an increase in RSV (respiratory syncytial virus) cases in surrounding communities that is expected to affect Campbell County. Although there has not been a RSV surge to this point, she said one very well could be coming.

“We’re anticipating numbers of RSV increasing, which we have already seen,” she said.

The increased inpatient volume has led to an increase in deaths, COVID-19 related or otherwise, associated with the hospital.

From July 1 through Oct. 26, there have been almost four times as many patient deaths, compared to the same time frame in 2020. That figure includes all CCH patients, whether treated at home or in the hospital. One third of those are COVID-19 deaths, Tucker said.

That includes a 250% increase in strictly inpatient deaths during that same span, she said.

It's funny that this is what Dr. Hartsaw says in the article, “People have no idea how prevalent COVID is right now and how sick people are in our hospital,” said Dr. Sara Hartsaw, because at the board meeting where the Hospice House possible closure was discussed, before the Board retreat, she made the comment that the not all of the positive COVID cases admitted in the hospital were just COVID cases. She referred to some being surgical cases that tested positive COVID. The crowd cheered at this statement. Seemed like she was making light of how many COVID cases were hospitalized at that time. She didn't take into account how overworked the hospital staff was at that time. She added to the public's perception of how prevalent COVID was and how sick people are in the hospital. People that are in positions of power really need to know the facts before they publicly say things related to COVID. This has been going on since COVID started. Our healthcare workers take the brunt of this misinformation. City, County and Hospital spokespeople need to do better. Check the facts before you speak.

Probably ought to read your own response. If you take your own advice assuredly, you’ll be better off.

But Del Shelstad said covid was a joke and no worse than the flu. Who to believe!?