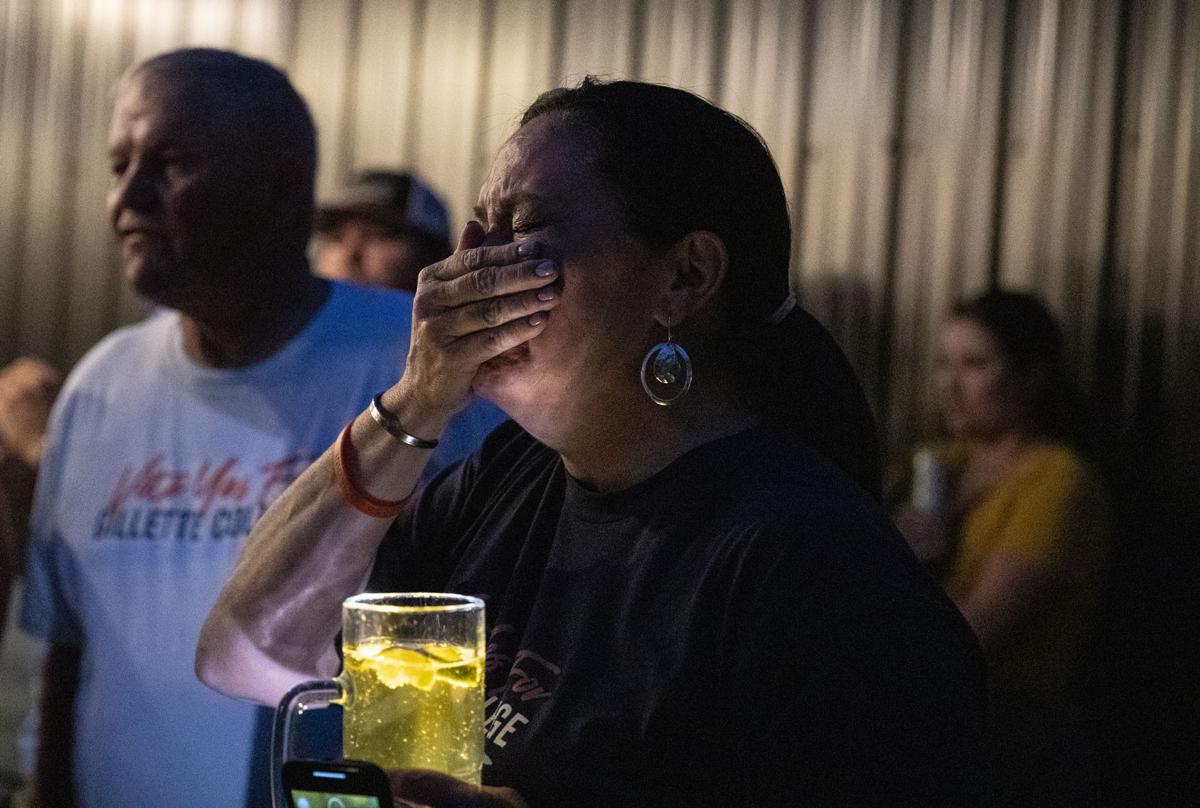 Jami Howe reacts with tears of joy upon hearing of the large lead of votes in favor of separation from the Northern Wyoming Community College District following Tuesday's special election during a gathering at Grinners Bar. 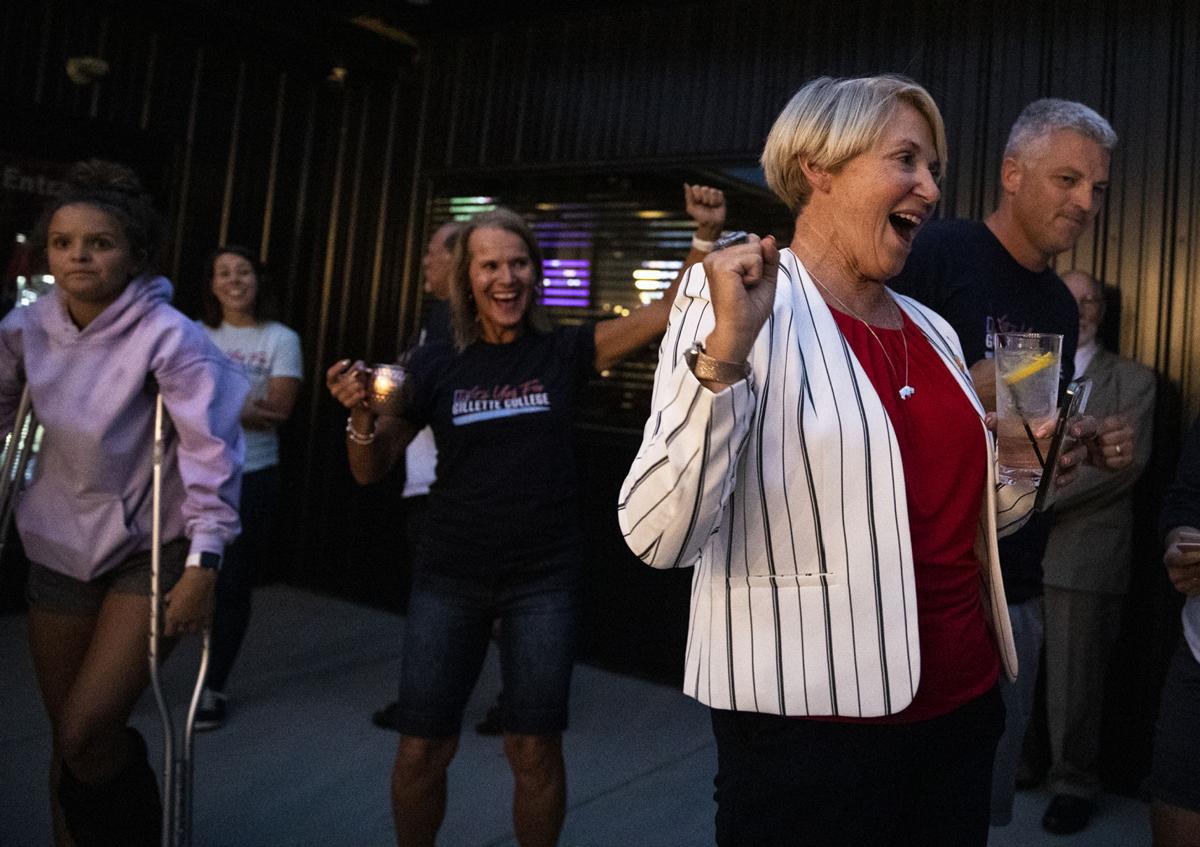 City of Gillette Mayor Louise Carter-King, at right, celebrates with advocates in favor of separation from the Northern Wyoming Community College District upon hearing of an overwhelming lead in votes following Tuesday's special election during a gathering at Grinners Bar. 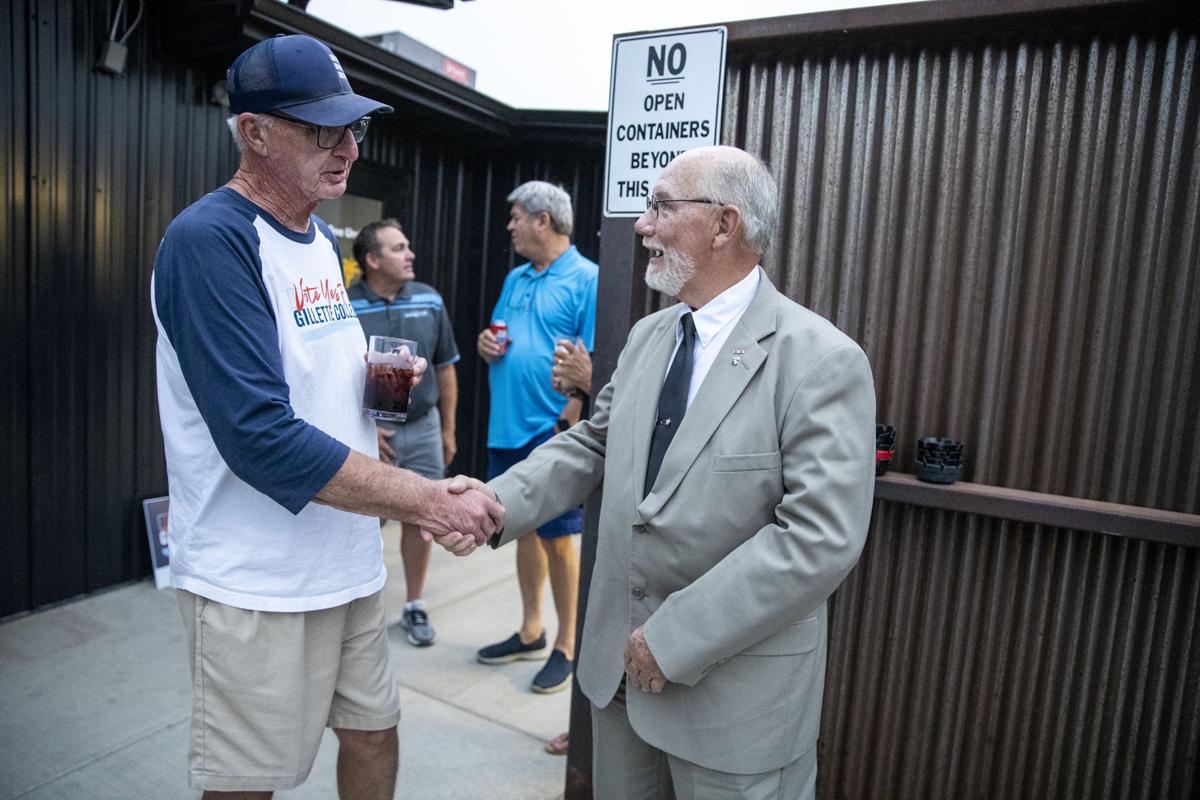 City council member Billy Montgomery, at right, congratulates board candidate Nello Williams after early votes were announced at Grinners Bar Tuesday evening. Williams received 2,130 votes in the election, and will serve on the newly-formed community college district board. 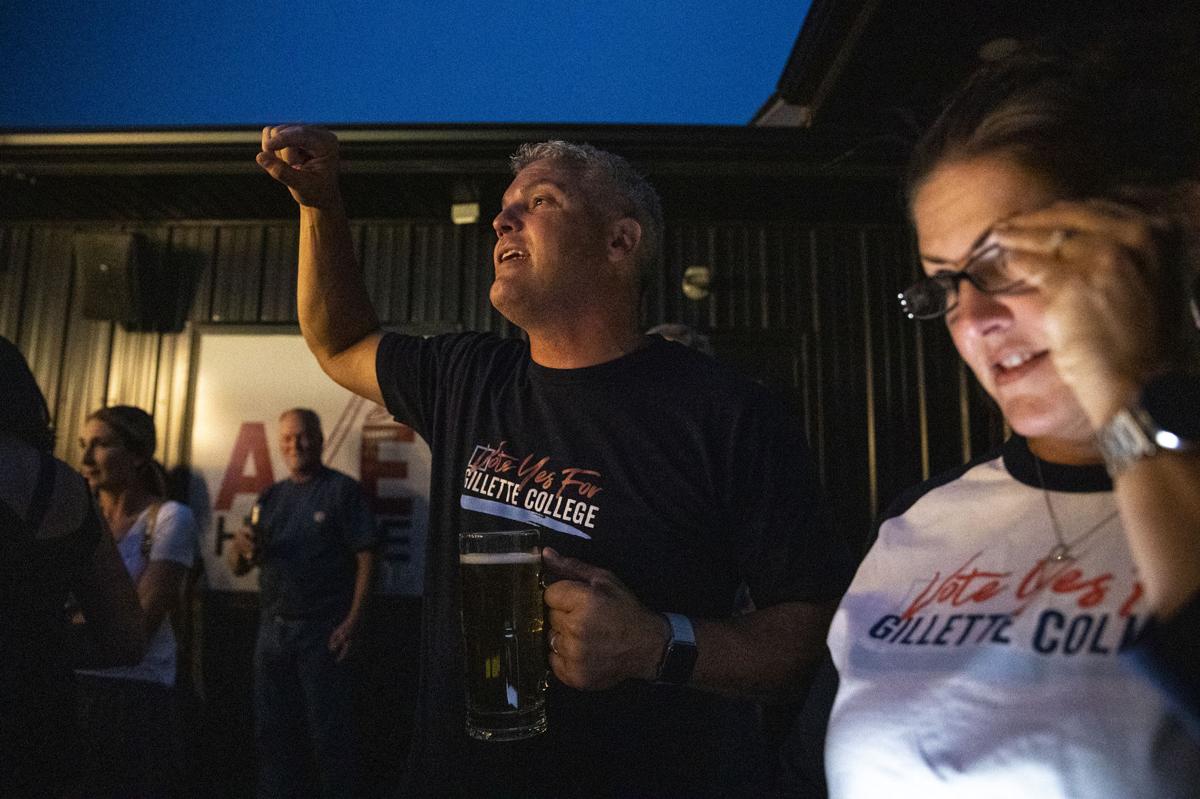 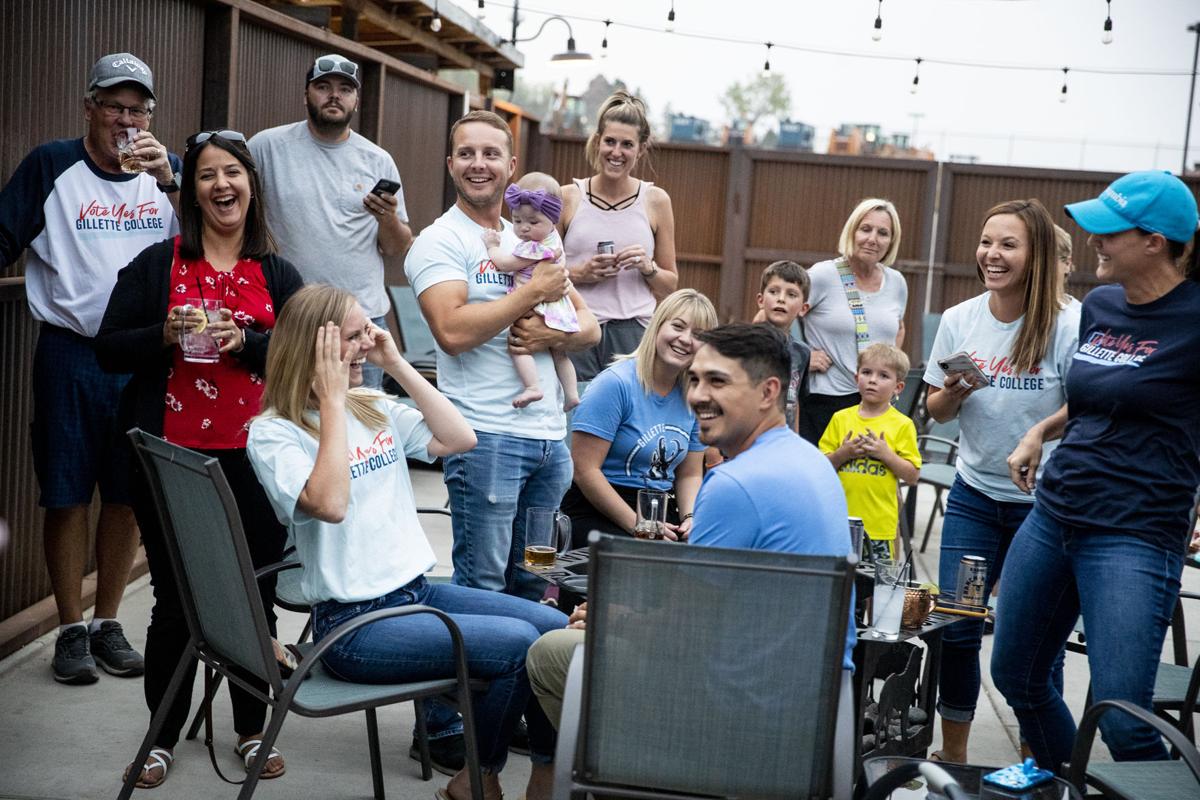 "Vote Yes" advocates smile and celebrate upon hearing early vote results in their favor during a gathering at Grinners Bar Tuesday evening. 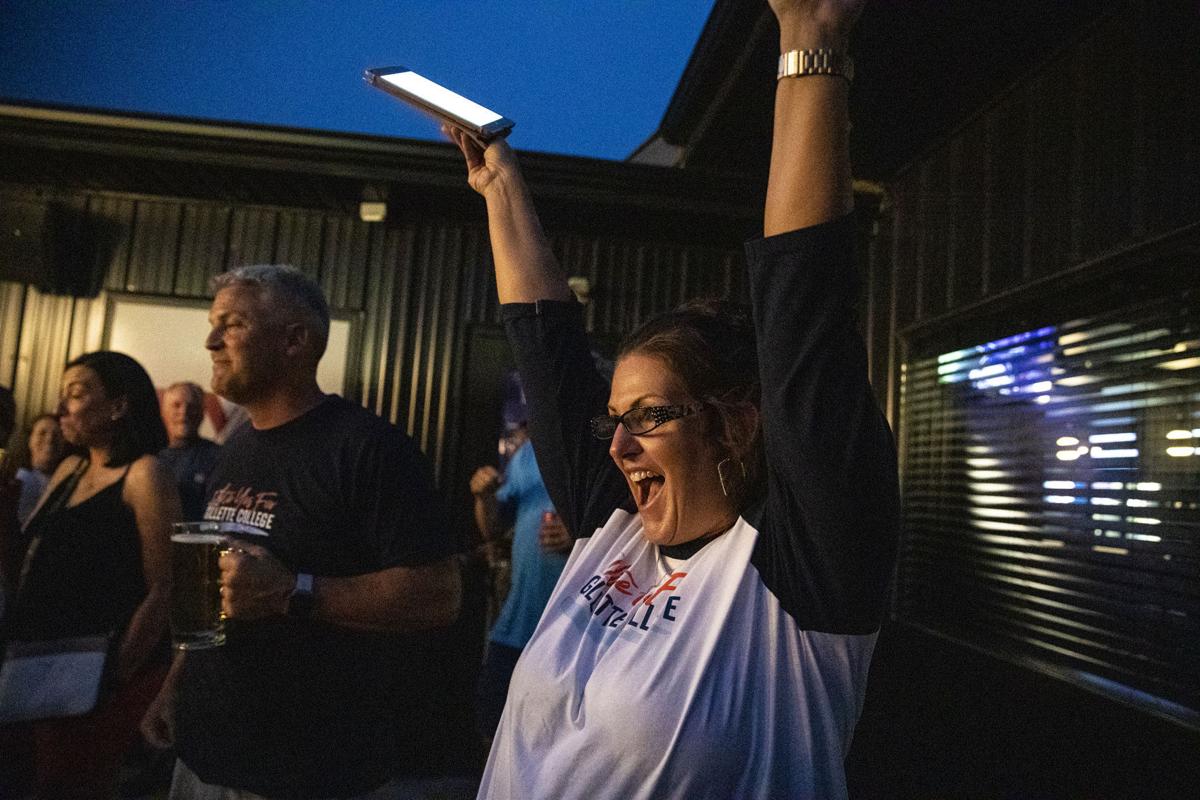 Darla Cotton raises her arms in the air in celebration after hearing positive vote results calling for separation from the Northern Wyoming Community College District following Tuesday's special election during a gathering at Grinners Bar. 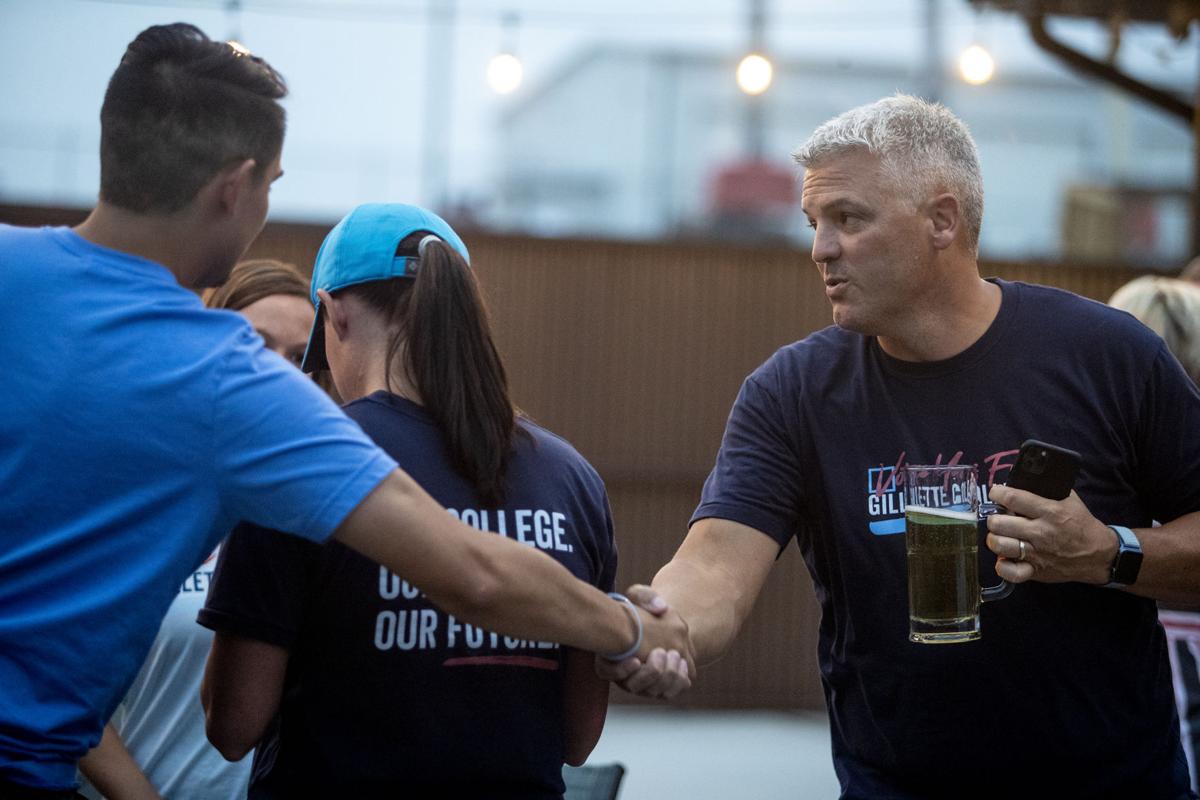 Gillette College board candidate top-vote getter Josh McGrath, at right, who received 2,764 votes, is congratulated following an early update in vote results during a gathering at Grinners Bar Tuesday evening. 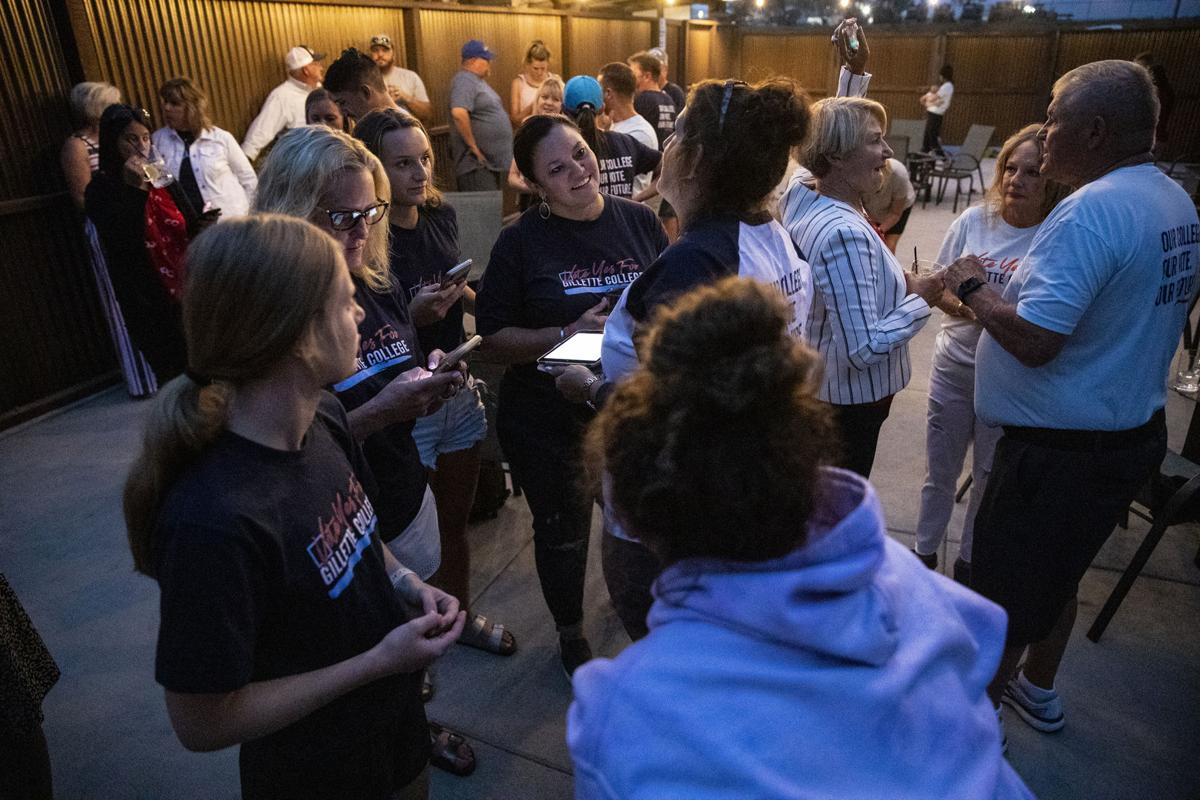 Gillette College will become its own community college district.

Voters overwhelmingly approved the separation from the Northern Wyoming Community College District by a 4,160 to 1,724 margin at a special election Tuesday.

It is the finish line of a multi-decade effort for the county to have a college district of its own, after an effort failed in 1992.

Campbell County — the third largest county in the state — now joins seven other counties in hosting a community college district.

"I’m so excited for the future of Gillette and Campbell County," said Alison Ochs Gee, who was elected as one of the seven district board trustees.

"I think this is indicative of where our community is headed," she added. "We’re growing and thriving. Although we have the naysayers, we’re going to continue to thrive in spite of it.”

“It is a great thing to see a community actively supporting higher education,” he said. “Our Board of Trustees and I are ready to go to work to help the newly created Gillette Community College District become independent and successful.”

He said based on the “long-standing partnership” between the district and Gillette College, “we recognize the unique position we are in to provide specific, real-time support that will be necessary and helpful on the road to accreditation for the new district.”

Jacob Dalby, one of the leading voices against the tax, said he thought there would be a better turnout from the “no” side, but admitted that “the liberals had a good push. They had a lot of money. Money always wins.”

He said he doesn’t think that everyone who voted yes are liberals, but that “I think they were misled and lied to” by the supporters of the college district, which was “definitely a bunch of liberals.”

But soon enough, Campbell County will see through that, Dalby said.

“It won’t take (the voters) long to realize they’ve been lied to,” he said. “And when they do, they’re going to be pissed.”

Early voting set the tone for the measure, with votes cast before 5 p.m. Monday coming up 78% in favor of a separate college district.

There were 3,166 ballots cast as of the end of the day Monday, and 78% of them, or 2,464, were in favor of the district, while 678 were against it, according to results posted to the county's website.

In the race for trustees, Josh McGrath, Tracy Wasserburger, Nello Williams, Olin Oedekoven, Robert Palmer, Frank Stevens and Alison Ochs Gee led the list of 23 candidates and will begin the work to separate from the district.

“There’s a good group of trustees,” said Williams. “I think we’re all in it for the same reasons and that’s to make our community a better place to live, our college a better college, our students to have greater choices in relationship to their classes."

“Let’s face it, it’s great to get out of Sheridan,” he added.

In addition to looking towards the future of the college and community, McGrath had reason to turn an eye towards the past as well.

“My mom lived and died for this,” McGrath said after becoming the top vote-getter among newly elected trustees. His mother, Sherry, pushed for Gillette College to become independent during the last go around almost 30 years ago.

“It’s just overwhelming to me,” said Sen. Jeff Wasserburger, R-Gillette,who introduced the senate file that led to the special election in the state Legislature earlier this year.

That vote breakdown was (winners in bold):

These results are unofficial, and they will remain unofficial until the canvassing board meets later this week to certify the results.

On Tuesday night, the long-awaited fate of Gillette College was decided.

With the Vote No Facebook group and the front candidate slinging a lot of mud and name calling as the primary tactic, it's not that surprising less people backed the effort. .

I think this outcome will be a positive for Gillette and Campbell County. I don't appreciate the comments from Jacob Dalby regarding our citizens being lied to... He simply, is way out of his league. He's a good kid, but simply represents the uneducated rednecks that just have to be upset about something, even when they don't understand what's involved. Finally, how sad that about 6000 residents out of nearly 32,000 chose to vote. We are a society that whines and moans about a lot of things, but when we have a chance to make a difference... we sit at home, eat chips, watch TV, and get fat.

I think you misread the headline. The new district won. If stupidity had won the day we would still be under our Sheridan overlords and the Dalbys would have received more votes.