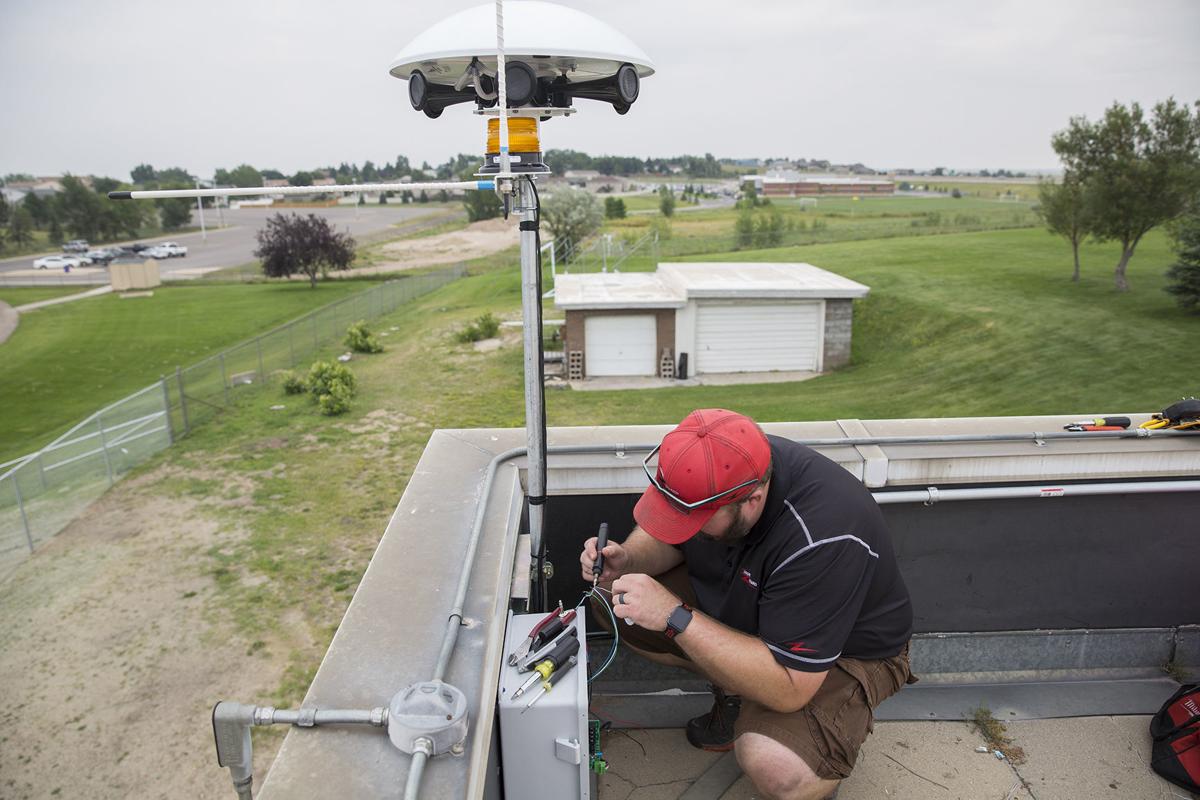 Dusty Fisher works on connecting wire from the lightning prediction control center to the horn controller on the roof of the maintenance building at Campbell County High School on Friday afternoon. 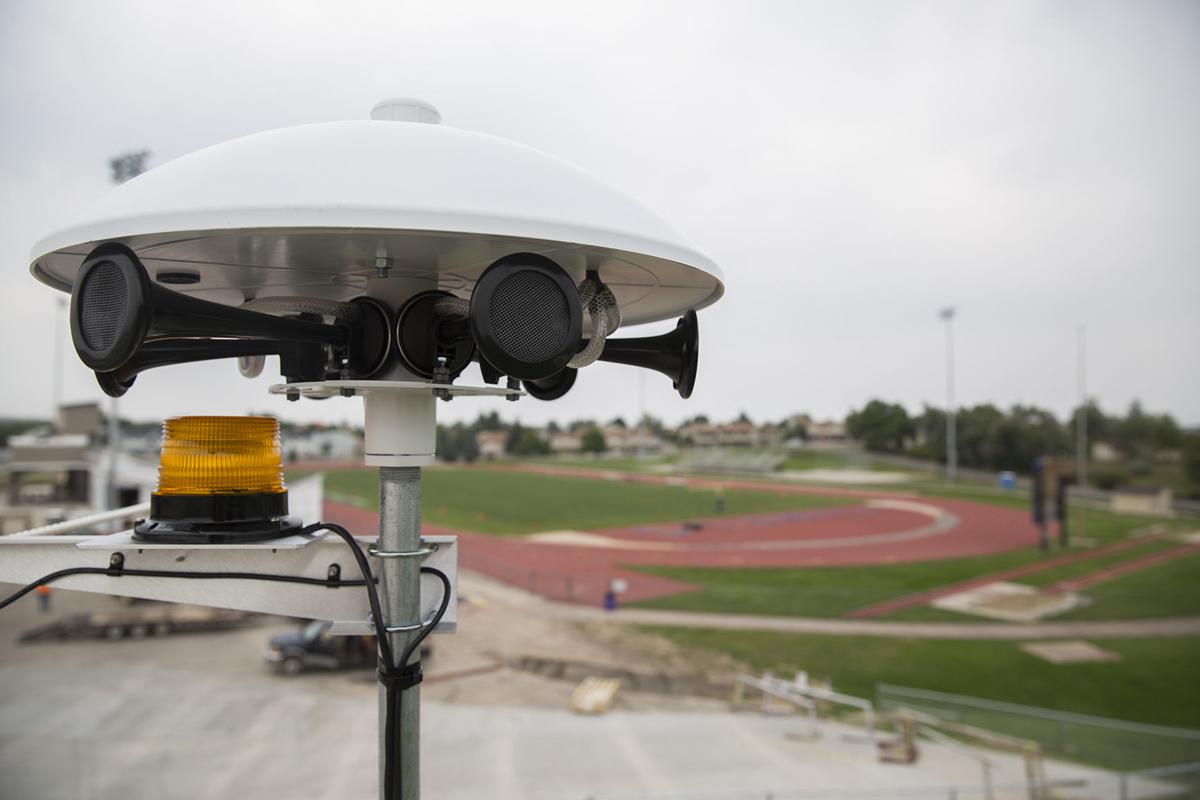 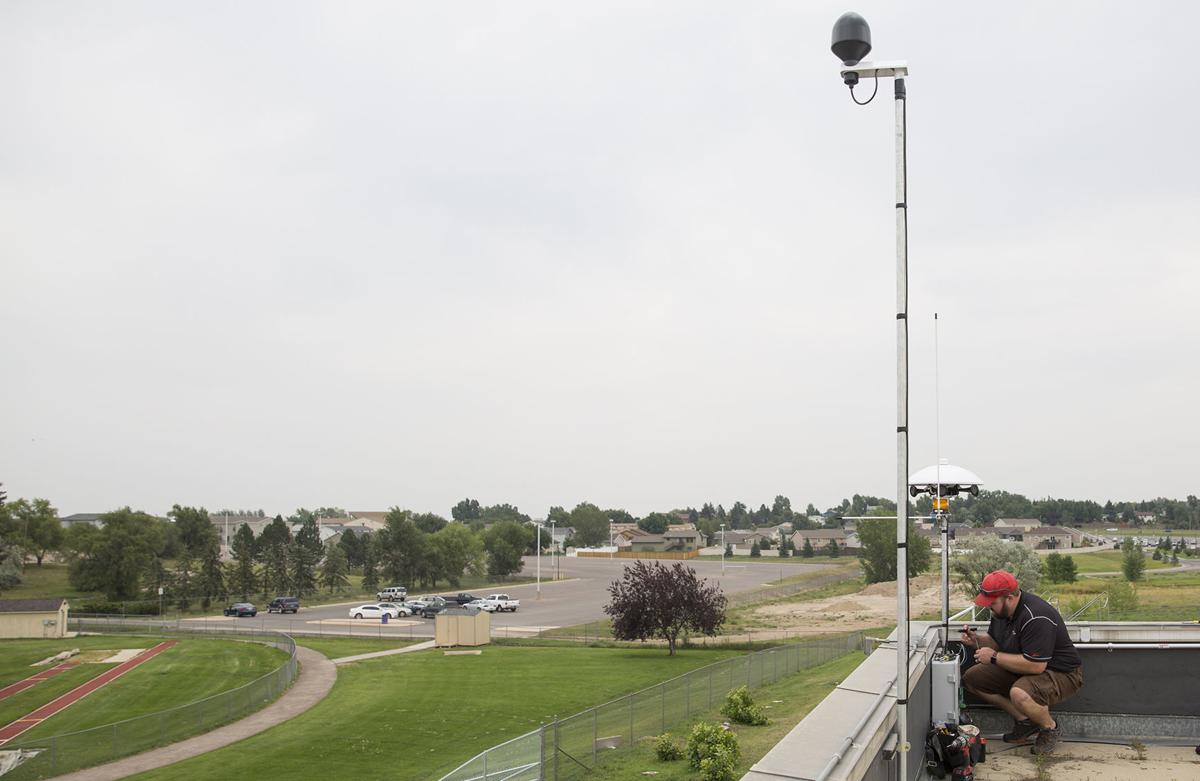 Dusty Fisher works to connect wire from the lightning prediction control center to the horn controller on the roof of the maintenance building at Campbell County High School on Friday afternoon.

Dusty Fisher works on connecting wire from the lightning prediction control center to the horn controller on the roof of the maintenance building at Campbell County High School on Friday afternoon.

Dusty Fisher works to connect wire from the lightning prediction control center to the horn controller on the roof of the maintenance building at Campbell County High School on Friday afternoon.

Wind speeds were hitting 15-20 mph last July at Cam-plex in Gillette at the first performance of the National High School Finals Rodeo as thousands of competitors and their families were either watching, riding or at their nearby campsites.

Within 45 minutes, all of that changed. It’s common in Wyoming for a summer storm system to bring sudden high winds, heavy rain and lightning. That’s exactly what happened July 16.

There was a delay during the pole bending competition because judges couldn’t see the flagger at the other end of the arena through the blowing dust.

The general weather policy for the venue recommends that if lightning strikes within 10 miles, evacuate everyone from that location. Officials can resume action and let the crowd return to their seats 30 minutes after the last observed lightning strike.

Adhering to that policy can delay events for hours and requires someone to make a judgment call.

That day is coming soon to Campbell County.

The installation of the Thor Guard lightning prediction system in Gillette and Wright is groundbreaking in many ways.

It’s the first community in Wyoming and the western Rocky Mountain region — at least six states — with near total coverage through a system that can alert residents ahead of time when lightning is imminent.

Dusty Fisher, 36, the territory manager at Thorguard in charge of installation, sales and service, began installation in Gillette last week as he erected the system at Thunder Basin High School.

He did the same at Campbell County High School on Friday so that those two areas of town would have the system working before the high school football season starts. It was operational before the schools had their football scrimmages this past weekend.

Fisher will return to Gillette and Wright after Labor Day weekend to continue the installation, covering all of the area’s school playgrounds, Dalbey Memorial Park, Bicentennial Park, the Bell Nob Golf Course (each golf cart will include a warning sensor) and more.

He also will install a system that will cover Wright’s two schools and golf course. It should be completed by Sept. 11. A training of Gillette, Campbell County and school district officials is Sept. 10.

“Any city, county and school district activity will be covered (by the system),” said Michelle Heitmann, the school district’s wellness and safety manager.

There may be some spots in Gillette or Wright that aren’t covered as well. The further away you get from a base system, the less accurate it is. But maps of Doppler radar will be available online that can be accessed by most cellphones, allowing anyone to see approaching weather systems.

This is all possible because the Campbell County Community Public Recreation District decided in May to set aside $98,000 to bring the Thor Guard system to Campbell County.

The final cost to set up the five base systems and remote areas in Gillette and Wright for coverage actually topped $130,000 as officials expanded the coverage and equipment needed. The school district, city of Gillette and Campbell County are making up the $32,000 difference and the cost of maintenance for the rest of the year.

The entities have agreed to pay the annual maintenance costs afterward.

The system will alert residents through a loud horn — known as the “Voice of Thor” — and with color coded warnings on its website.

Based on static buildup in the atmosphere, which Thor Guard measures, and when the voltage or charge levels begin to neutralize, the system will alert residents and officials when a lightning strike is predicted within 2.5 miles, or 10 to 15 minutes before it happens. It includes four levels of threat conditions: green for all clear, white for caution, yellow for warning and red for emergency.

If there is a red alert, the horn will send out a 15-second blast. A bright strobe light that can be seen in daylight also will be activated and continue flashing during the alert.

An all-clear will sound when the danger is past. That’s when the horn activates with three short blasts, each for 5 seconds.

There will be five base systems in Gillette with solar-powered remote locations within a mile of the bases. The horn can be heard up to 700 yards from the base locations and reach up to 133 decibels within 10 feet. Red alerts will continue for a minimum of 10 minutes.

The horn is composed of six trumpets. The system also will be activated for certain hours each day “so it won’t wake the world up” with a warning late at night or early in the morning.

The detection rod that measures the static field isn’t grounded. If it were, it couldn’t measure the conditions, Fisher said. He’s never had a sensor replaced because it was hit by lightning. Since it isn’t grounded, it doesn’t become part of a lightning path.

He’s only had to replace one sensor because of damage and that was when lightning hit part of a building nearby at a golf course.

The red alert, Fisher said, is 100 percent accurate, but other levels may not be if a storm suddenly fizzles out.

Members of the Recreation District hope the system will help prevent injuries and protect the community at large events, such as high school football or soccer games, baseball and softball games, high school rodeo and more.

“It’s so good for the community,” said Lisa Durgin, chairwoman of the recreation district board. “Everyone will be able to benefit from this.”

Eisenhauer said it will be welcomed by activities directors, because someone — often them — has to decide whether to delay an event or evacuate the crowd and athletes with the previous detection system.

Some public officials have questioned the need for Thor Guard, saying people can look outdoors and see that they should not be outside in threatening weather.

This system is different, the officials have said. It predicts a lightning strike. All the other systems in use can only show that lightning has been detected within 10 or 25 miles after it strikes.

The system will provide coverage of most of the county, she said.

“I think at some time in the next two years it will affect everybody in the community,” Durgin said. “We’re pretty fortunate. Our goal is to reach as many people in the community with the money we have. I think this encompasses that ideal.”

Beam me up, Scotty

While Campbell County isn't well covered by the National Weather Services' Doppler radar in Rapid City, South Dakota, and Riverton, the Thorguard lightning prediction website will have maps of local Doppler radar images available to Campbell County residents, whether they are close to the base and remote locations in Gillette and Wright or not.

Officials also plan to put up posters with the website so residents can connect to it while at different events.

The website will include a map with color coding for conditions: Green for all clear, white for caution, yellow for warning and red for red alert. It also will provide data on the lightning strikes.