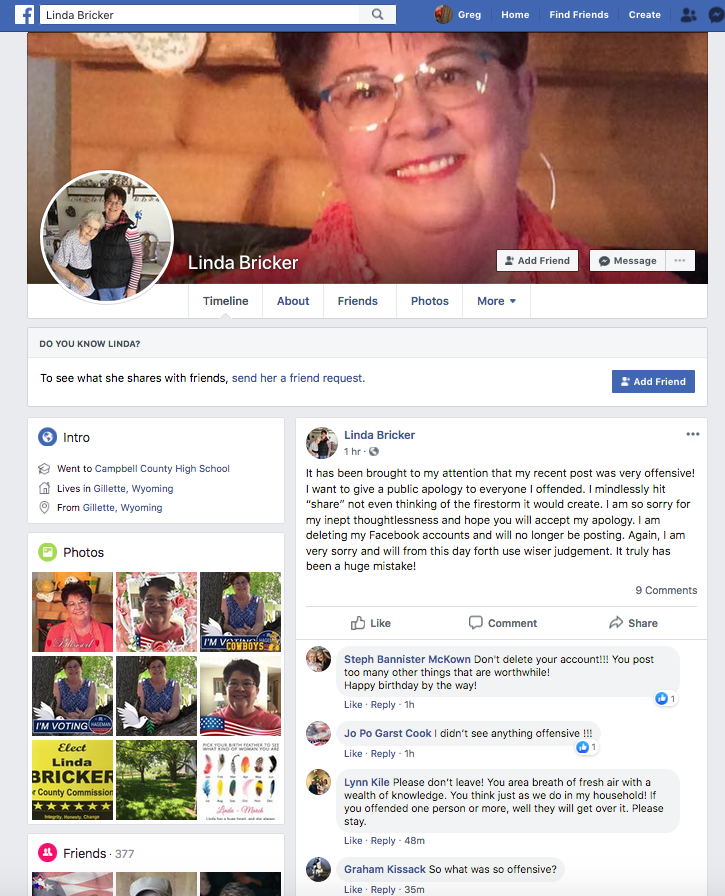 Campbell County School District Trustee Linda Bricker has apologized on her Facebook page for sharing a post that drew a complaint from a former teacher. 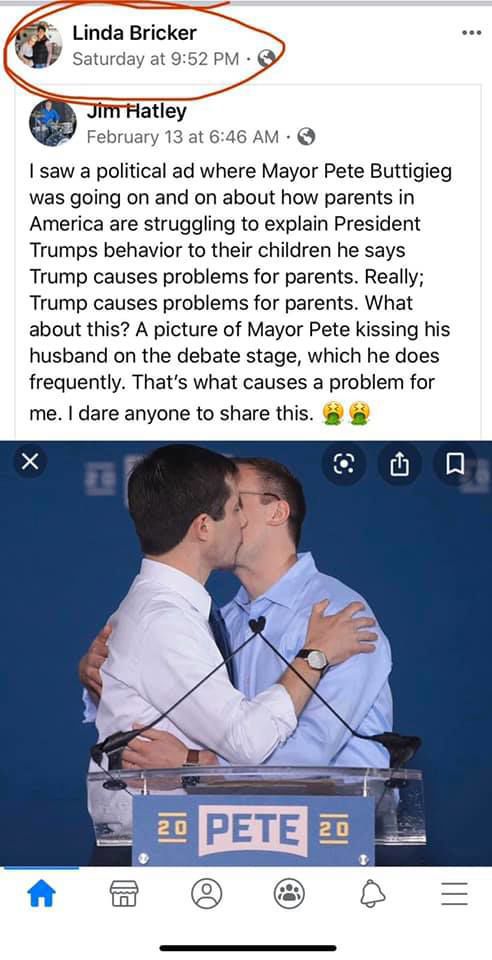 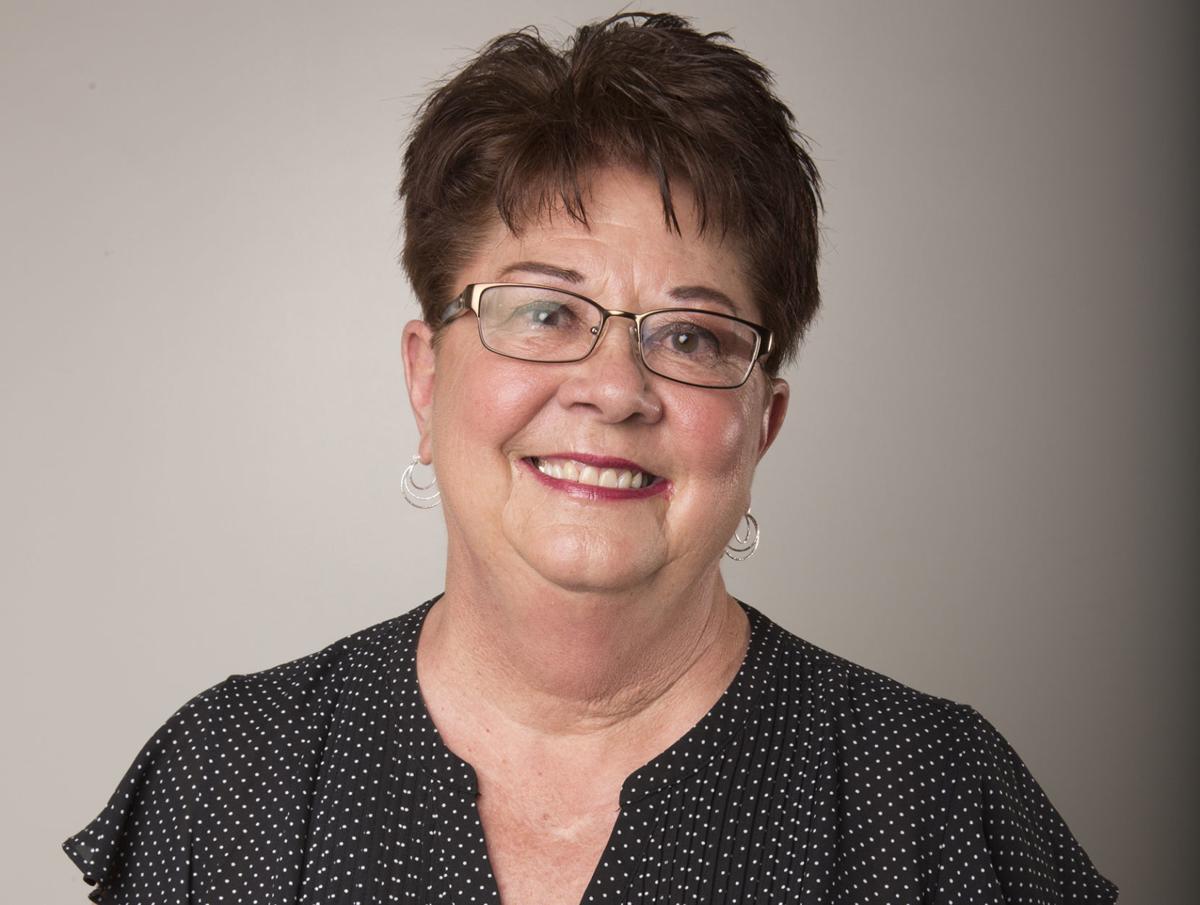 Campbell County School District Trustee Linda Bricker has apologized on her Facebook page for sharing a post that drew a complaint from a former teacher.

A Campbell County School District trustee has apologized for sharing a Facebook post that prompted a strongly worded complaint from a former district teacher.

Linda Bricker shared a post Saturday that featured a photograph of former Democratic presidential nominee candidate Pete Buttigieg kissing his husband at a campaign event. The caption to the post says that “parents in America are struggling to explain President Trumps behavior” then pointing out that Buttigeig, who is gay, also displays inappropriate behavior for children to see.

In a letter sent to Superintendent Alex Ayers, Bricker and her fellow school trustees, Trey Sutherland calls Bricker out for what he calls “blatant discriminatory remarks on yet another marginalized community — the LGBTQ community — on social media.”

He writes that she “has a history of uploading social media posts that are aimed at further oppressing certain populations that are already feeling unwelcome in Gillette because of people like her.”

Because Bricker is an elected official and sits on the school board, she should be held accountable to not show a bias against LBGTQ students or their issues, he said in a phone interview.

The school district has a broad anti-discrimination policy in place, and trustees should reflect that publicly, Sutherland said.

Bricker posted an apology to her Facebook page Tuesday afternoon in response to Sutherland’s letter,

“It has been brought to my attention that my recent post was very offensive!” she wrote. “I want to give a public apology to everyone I offended. I mindlessly hit ‘share’ not even thinking of the firestorm it would create. I am so sorry for my inept thoughtlessness and hope you will accept my apology. I am deleting my Facebook accounts and will no longer be posting. Again, I am very sorry and will for this day forth use wiser judgment. It truly has been a huge mistake!”

A phone message left for Bricker wasn’t returned as of the time as of press time Wednesday.

School board Chairwoman Anne Ochs said she heard about Sutherland’s letter and Bricker’s apology late Tuesday evening. She said that holding an elected office makes anything a person puts out into the public fair game for reaction.

She said she heard that Bricker was upset by the reaction, which by coincidence also was her birthday.

“Honestly, from reading her apology, I think Linda, she is a kind-hearted soul,” Ochs said. “I cannot imagine that she meant to go out of her way to (offend anyone).”

She said the reaction to the Facebook post is a sign that trustees may need more training about how to use and deal with social media.

“Maybe we’re going to have to change our training a bit and include social media in there,” Ochs said.

She also said that if the board were to discuss the post, “any type of discussion like that would happen in the open.”

After seeing Bricker’s apology, Sutherland said he appreciated it, but believes she should resign from the school board. That’s because while she apologized for one offensive post, she has a history of sharing and expressing discriminating views through social media, he said.

She has shared other posts that target Buttigieg, along with one that depicts Bernie Sanders as part of the Holocaust and one that compares Sanders to Hitler.

Not all of her posts are controversial. Bricker also shares posts that reflect her Christian faith and show support for patriotism, the military and first-responders.

“I’m surprised she (apologized) so quickly and it might be a step in the right direction. However, I think the real harm is still what she believes and how she’s going to use her beliefs when she’s ultimately making decisions on the school board,” Sutherland said.

Sutherland, who is gay and now lives in Washington state, said he taught for four years in the Campbell County School District. He said expressing anti-gay views discourages LGBTQ students from bringing their concerns to trustees or administrators.

“I still think the school board isn’t a place for her to be,” he said. “We need leaders who are willing to speak up for those marginalized students and I don’t think she’s going to do that.”

The response to Bricker’s apology on her Facebook page was a mix of support for the school trustee and for Sutherland’s position.

“Linda, I’d like to accept your apology, but since you have posted other previous posts which target LGBTQ, Muslims and immigrants, it’s hard to think this was a mistake,” posted Stacie McDonald.

“Linda, I back you 100% and don’t you dare cave to people who do not share your conservative values,” wrote Jodi Williamsen. “Stay true to your morals and to God. You have just as much of a right to your opinion as they do.”

“That’s totally her call,” she said. “Everyone has a right to an opinion, but she does not speak for the board.

“Our board and our district and our teachers and our administration bend over backward to make this a safe and caring environment for kids. ... All kids. It’s not just for the ones who have black hair or brown hair or green eyes or brown eyes.”

Ochs said as an elected official, “people pay attention to your thoughts” and that “I believe we need to treat each other the way we expect our kids to be treated.”

Several at packed meeting ask school board trustee to resign

Nearly 250 students in Campbell County have signed a petition asking for the resignation of school board trustee Linda Bricker.

Linda is one of the kindest, biggest-hearted people that I have met since moving here 9 years ago. Perhaps she is actually just concerned about the degradation of society, and rightfully so! I don't think she needs to apologize, and I also think that the former teacher who called her out to begin with should keep his opinion to himself because he doesn't live in this community anymore. I have never and would never publicly criticize a community that I was formerly a member of.

She posted what she posted as a private citizen and not in the capacity of a school board trustee. If you want to attack her first amendment rights go right ahead. But notice the double standard. People like her are asked to keep their mouths shut so that they don't offend a certain demographic, while that particular demographic is apparently allowed to say and do whatever the heck they want.

Kudos to Linda for being brave in what she said and kind in the way she said it. Shame on this former teacher for sticking his nose where it doesn't belong, and cowardly hiding behind the societal protections that have been constructed for the homosexual community in this country.

JMorris I agree. It's her personal page. If u dont like what she posts stay off her page. Everyone needs to quit getting offended over every little thing. Everyone has a right their opinion get over it.

Good grief, what a complete waste of time and money. The "former teacher" should worry more about Washington; clearly he isn't in Campbell Country any longer, and to that I say, good riddance!

Also, what a shame the GNR ran this smear campaign in the first place, I remember when the GNR represented Gillette and Wyoming values, but like most of the mainstream media, the talking points are being delivered straight from the DNC. What a disgrace.

Good God Almighty! Let the woman be! She is entitled to her opinion and her views! She was not being derogatory or vile in any way, shape or form! Mr. Sutherland on the other hand, is being childish and callous! His demands are for his own self sense of worth! He wants what he wants and that is it! His rhetoric explains what kind of person he is. No discussion. No debate. No mercy! It's either agree with me and submit, or be bad mouthed and crucified! She should NEVER have apologized, just to have it thrown back at her! He thinks he is entitled and that is it! Grow up and act like an adult, Mr. Sutherland!

Yes it is her personal Facebook page but she made it public. Our youth needs to be taught to accept and respect other people’s beliefs. There is enough bullying without further antagonizing them to not like a particular group. I think she needs to resign.

As a former Campbell County high school teacher in the early 70s and parent of two children who attended elementary school in Gillette, I am absolutely horrified that the Campbell County school board would not IMMEDIATELY remove Ms. Bricker. Every community has LGBTQ students in their schools, whether they know it or not, and these young people and their friends and families should not have to be exposed to such thoughtlessness. They are God's children too, and "wonderfully made". Apparently she considers herself a Christian, but she is obviously not one. Christ's Great Commandment was "You shall love the Lord your God with all your heart and with all your soul and with all your mind. This is the great and first commandment. And a second is like it: You shall love your neighbor as yourself." I weep for Gillette, I weep for the head of you school board, and I weep for Ms. Brickel. May she ask for God's forgiveness and may she be immediately removed from the Campbell County school board.