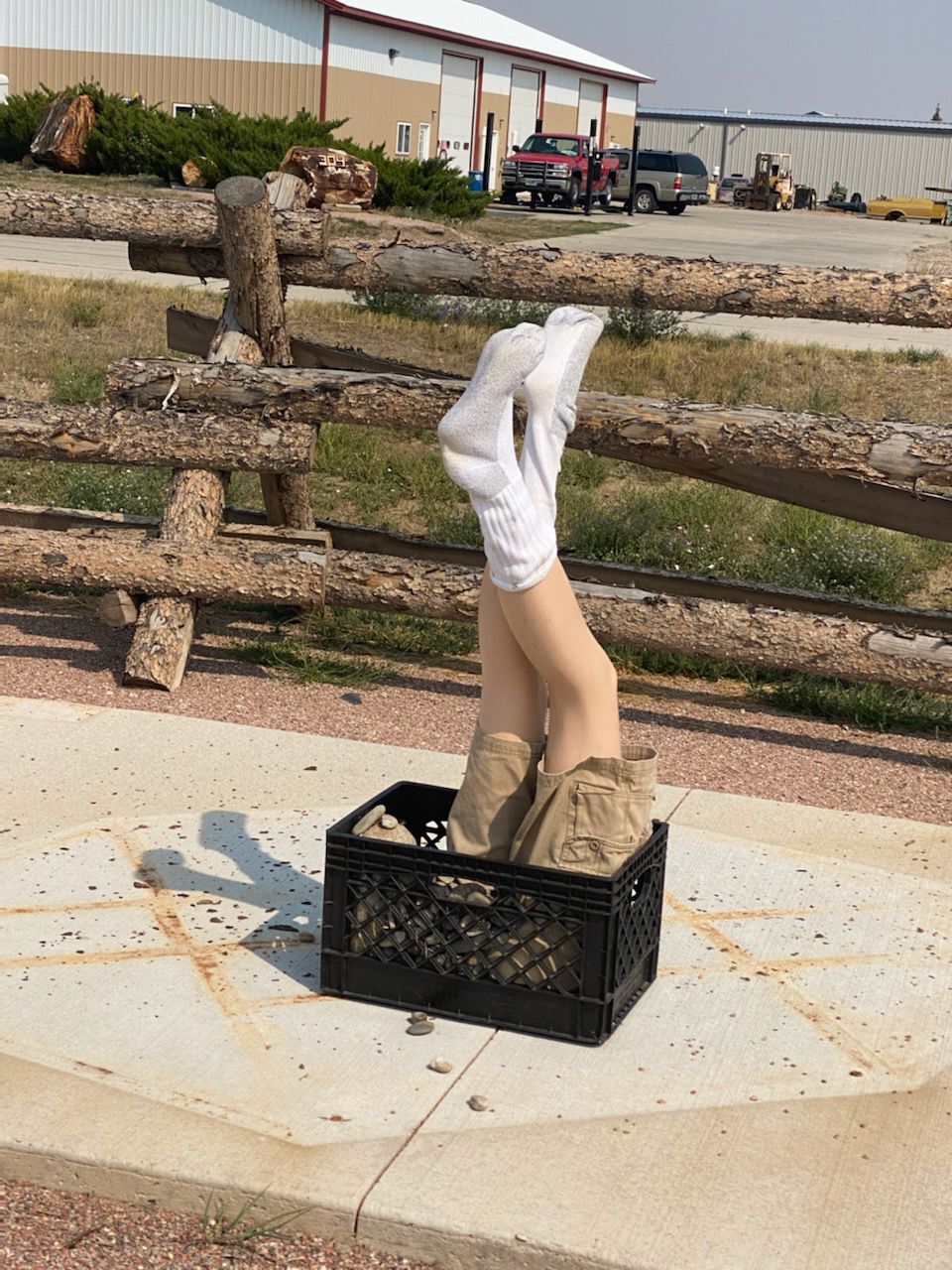 Nello Williams, with the help of some north side neighbors, replaced “Clippity Clop,” a 5,000-pound horse statue, with their own piece of interpretive art. Williams said the upside down mannequin statue was removed within a day or so. 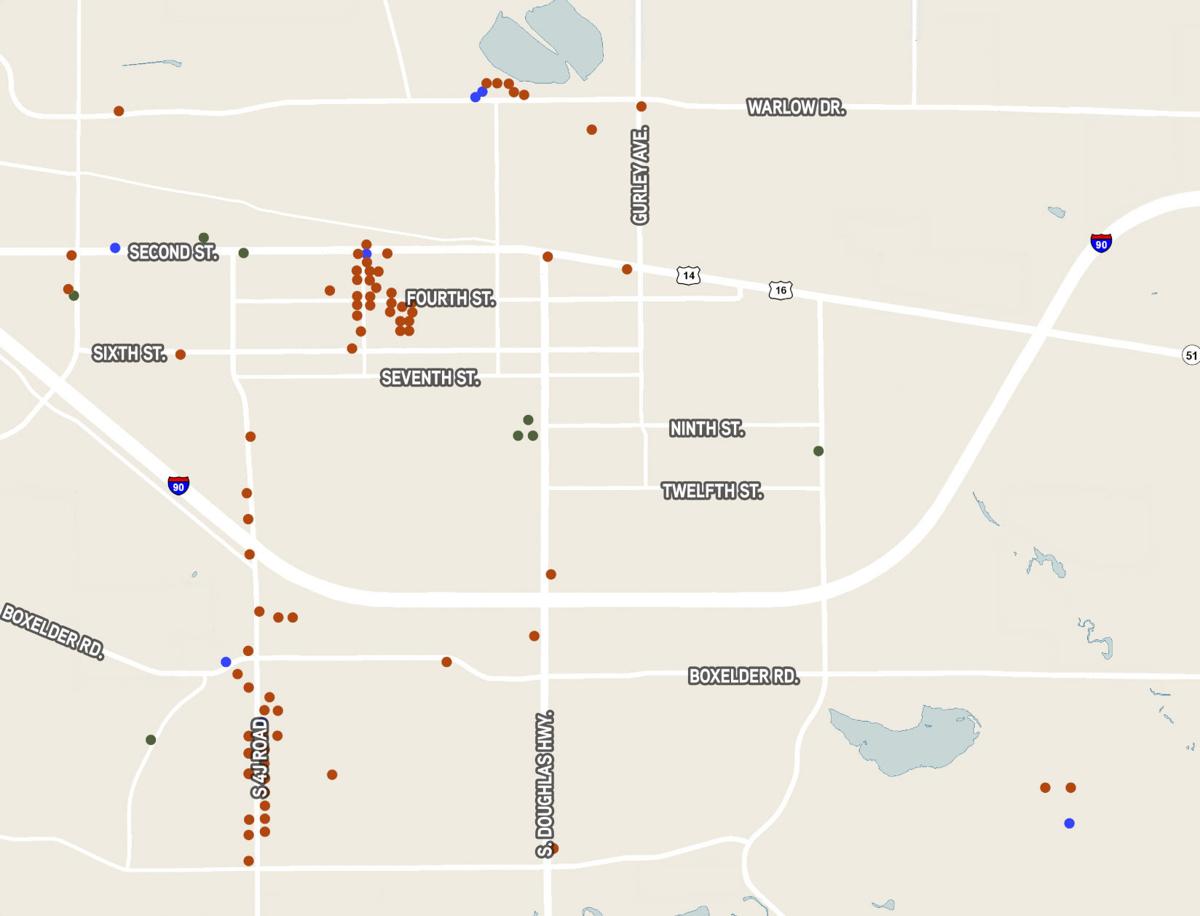 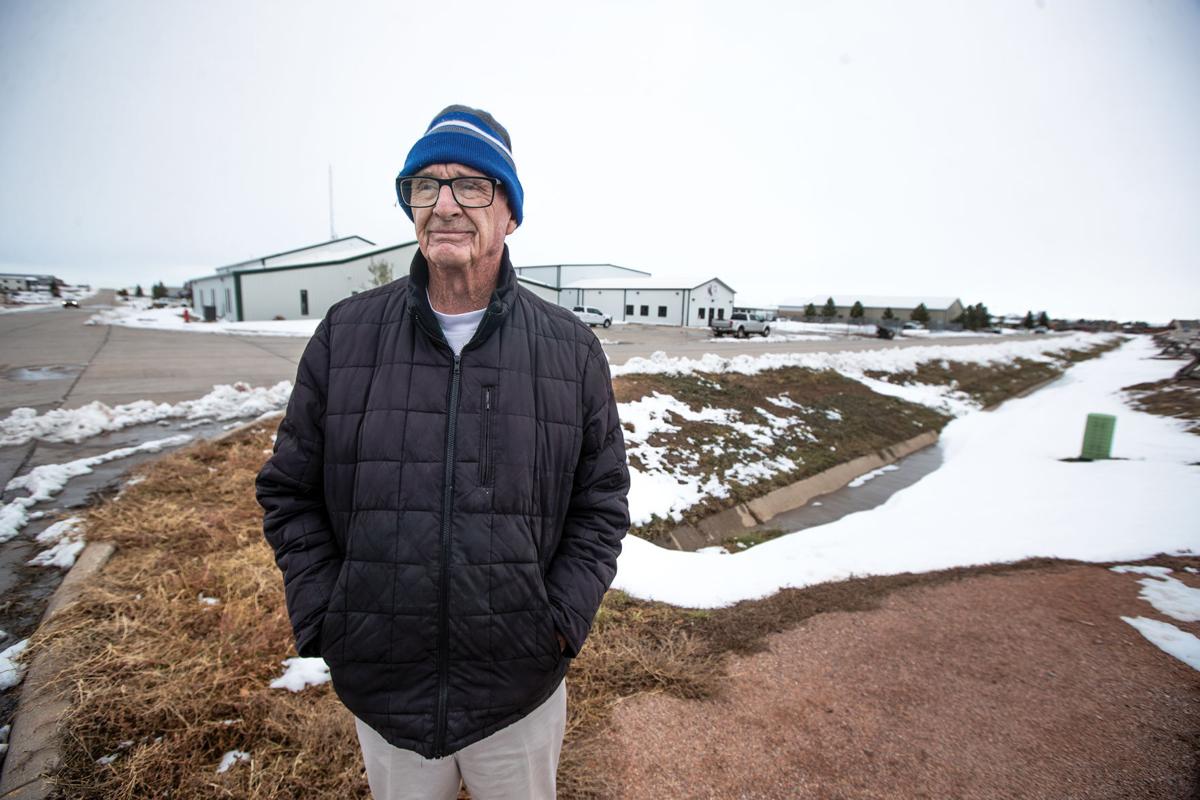 Nello Williams says he knows the city will eventually do something to beautify the eastern side of North Gurley Avenue, but is adamant in his efforts to remind them of the eyesore, including weeds and the removal of a 5,000-pound horse statue that used to sit alongside the ditch. 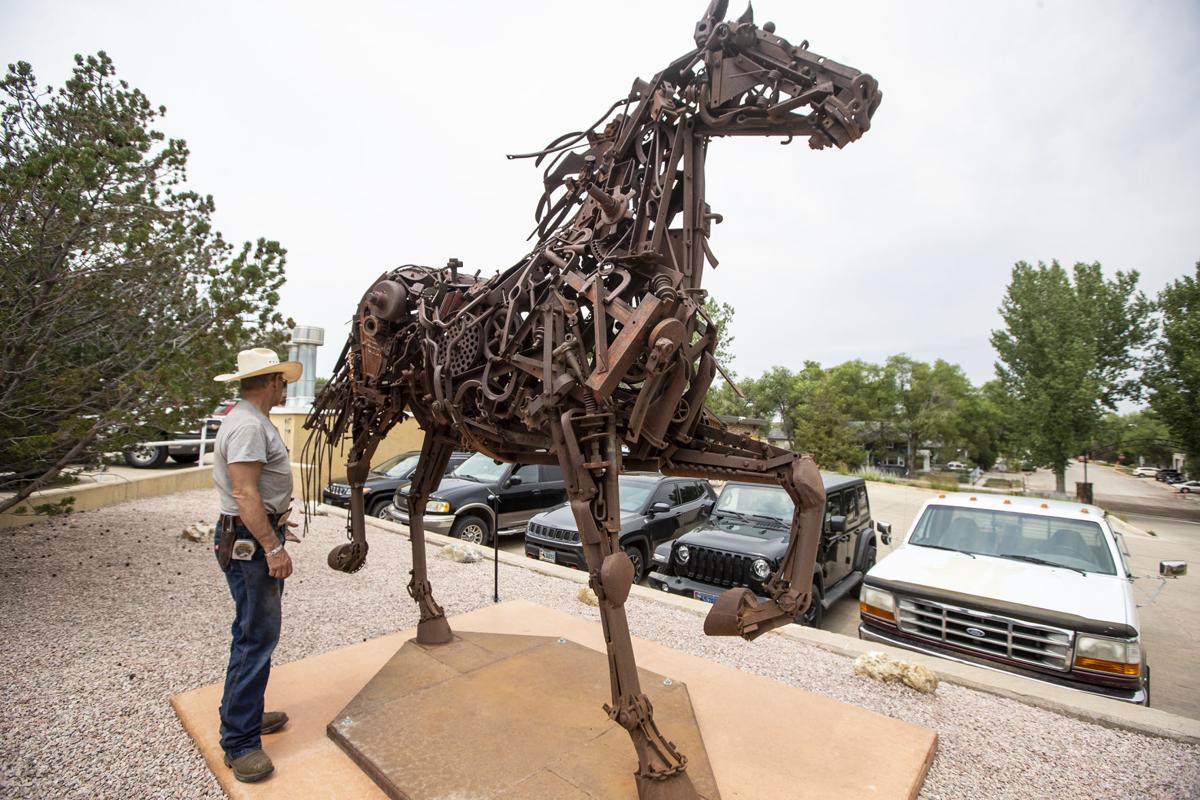 Local cowboy artist Jim Ford looks at the intricate detail of "Clippity Clop," a 5,000-pound horse statue, after it was moved into Mount Pisgah Cemetery for this year’s Sculpture Walk back in July. 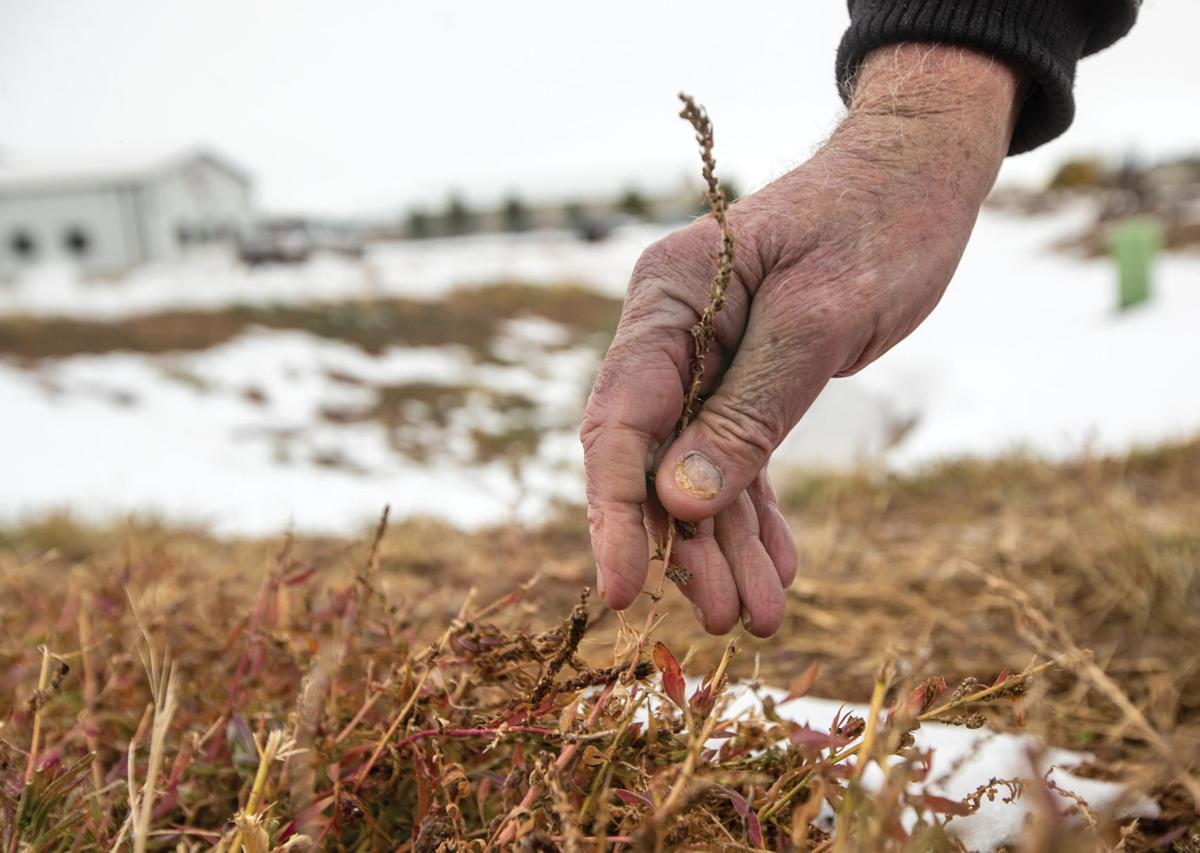 For over a year, he stood watch over the north side of Gillette.

Every car that drove across the Gurley overpass and every ballplayer who stepped up to bat at the ’Riders Baseball Field fell under the watchful eye of the giant rusted metal horse statue positioned at the intersection of Gurley Avenue and Warlow Drive.

Through a complicated transaction involving the city, the cemetery district and the sculptor, the massive horse statue was relocated to Mount Pisgah Cemetery, where Nello Williams, a long time north side resident, said it can no longer look out at the views of Gillette it enjoyed for over a year.

“That poor horse, that horse, he counted the cars whenever they went by, he watched Legion baseball, he watched the Kwik Shop, made sure everybody was safe,” Williams said. “But we don’t have the horse now.”

With all of its ascribed anthropomorphic characteristics, Williams named the steed “Big Red,” after the legendary thoroughbred Secretariat. In a letter to the editor, he called the brown metal statue “Big Rusty.” Its artist named it “Clippity Clop.”

Maybe its name is less important.

Williams is more concerned with what the missing statue stands for, or, stood for, and what it says about the perceived disparity in Gillette between the north and south sides of the railroad tracks.

Replacing the massive horse statue is not so simple. Not just because of its gigantic influence on north siders like Williams, but because of the physical void it left.

At 11 feet tall, 10 feet wide and 5,000 pounds, few, if any, statues to have passed through the Mayor’s Art Council Avenues of Art program can take that space, said Jennifer Toscana, the art council’s liaison.

Replacing the giant animal with a smaller statue, given the current concrete pad in place meant to house a much larger statue, could “look a little bit silly,” Toscana said.

Ultimately, whether it is replaced comes down to which submissions and selections the Mayor’s Art Council receives and decides on each year. The program has recently installed a secondary category for smaller statues, where the art council pays half of the regular $1,000 stipend to selected artists. Given the recent economic downturn, Toscana said the council’s budget for permanent purchases and loans has been reduced from what it once was.

“If we ended up with another very large piece submitted by an artist, we would be looking at that to replace the horse, because it’s such a large pad at this point,” Toscana said.

While that new category could save money and increase opportunities for new art in the community, it is exclusive to smaller pieces, ones that are certainly too small to replace the big hoof prints of “Big Red.”

The statues acquired and displayed in Gillette through Avenues of Art are primarily focused on 4J Road and Gillette Avenue, with other small clusters and one-off locations around town. The placement is determined by the Mayor’s Art Council, in conjunction with the city streets division. The streets division advises on the practicality of the statue placement, based on mowing schedules, snow plowing and other civic needs, Toscana said.

The Avenues of Art concept began, as its name implies, as a single avenue filled with art. That road was 4J, but through the years, as more art was collected and loaned, Toscana said the Mayor’s Art Council began spreading the artwork to other parts of town.

In a sense, the reason there is any artwork on the north side, or other corners of Gillette, is a matter of surplus.

The Children’s Memorial Walkway is north of town and hosts a significant collection of permanent statues.

Most of the artwork is in a few clusters south of the railroad tracks throughout the city, with the lion’s share placed on the east and west sides of 4J Road, between Sixth Street and Sinclair Street.

Gillette Avenue and the downtown area hosts the next largest collection. Another grouping is around the Fishing Lake in Dalbey Memorial Park. Similarly, artwork is sprinkled throughout the Gillette College campus, which of course coincides with the 4J parade of sculptures.

The Mayor’s Art Council had a $23,500 general fund budget for the last fiscal year. It also received $7,000 in private sponsorships , which were used for artist stipends for on-loan pieces, Toscana said.

The pieces of art allocated north of the railroad tracks include seven statues placed in the Children’s Memorial Walkway off of Warlow Drive. Otherwise, there are just a few standalone figures on the north side of town. Of course, with “Big Red” gone, there’s one less.

Through somewhat of an exchange deal with Mount Pisgah Cemetery, the 5,000-pound horse statue trotted south of the tracks behind the cemetery gates. Originally selected by the Mayor’s Art Council in 2019, the horse debuted in June of that year and was on loan from its artist, Dixie Jewett, for one year. Through conversations with the artist and an inability to sell the statue within town, Toscana said the council came to an agreement to hold on to the statue after the one-year lease ended, but did not officially have it on loan from the artist.

Since then, the Campbell County Cemetery District came to an agreement with the artist to lease the statue, which is how it made its way behind the cemetery gates.

“It’s complicated, it’s unfortunate it happened that way,” Toscana said. But the cost and the size of the statue prevented the city from hanging on to it. The statue’s price is listed at $65,000.

The cemetery district began its sculpture program in 2018. Since then, more statues have planted in the cemetery, mixing in an artistic aura between the headstones and cemetery foliage.

But like most facilities in Gillette, the cemetery is also south of the railroad tracks. Williams was careful not to blame the city or anyone in particular. Intentional or not, the disparity he sees in the north and south sides emerged over time. The missing horse is just his latest example.

“They know how I feel and a lot of the other residents out there feel the same way. I’m not just speaking for Nello, I’m speaking for a lot of the people around our part of town,” Williams said. “They wonder why isn’t our side beautified more than what it is … it’s just that’s how it’s got.”

As a south-sider, Kathy Kintz took issue with other beautification and artwork-related matters. She lives south of town, near Highway 50 and Force Road. Highway 50 is one of several highways that leads in and out of Gillette. Her point is that Gillette’s entryways could use some more beautification, including artwork displayed to greet visitors and passersby.

“I think my whole beef, I guess you would call it, would be the lack of beautification along the entryways into Gillette,” Kintz said.

Like Williams, Kintz also sees an issue in the broader beautification of the city, specifically with unseemly weeds and growth in eyeshot of major roadways. The removal of “Big Red” for Williams was just the tipping point. He has a list of complaints about the north side’s upkeep, from unmaintained sandboxes in neighborhood parks to rampant weeds along the Gurley overpass.

After airing his complaints before the City Council more than a month ago, he said he was pleased with the city’s interest and response to his complaints.

“Is the city going to do anything? They will,” Williams said. “I have a lot of faith in them. They will.”

City Administrator Hyun Kim, newly on the job, went with Williams and City Councilman Billy Montgomery to the ditch near the Gurley overpass to see what his complaints were about. Sure enough, Kim sent a crew out there to clean up the weeds and address his concerns.

“How much the public has spent on that (north) side as well, it’s in the millions over the past decade,” Kim said. “I’m not concerned that there is a disparity. As far as all of the work on the south side, it’s the timing of it … the city has spent some significant dollars on beautifying the north side of town too.”

“Can we do better? Absolutely,” he added.

Williams could talk your ear off about the Canada thistles and wild licorice weeds sprouting near the overpass. As good as he’s become at identifying what sprouts there, he remains tired of having to look at it.

Depending on weather and other mitigating factors, some years, more mowing is done than in others. But in any case, Streets Manager Troy Tyrrell said there is no preferential treatment between parts of the city.

“Not one side or the other gets favoritism,” Tyrrell said.

Because of the dry, hot weather of this past summer, Red Flag fire warnings cut down on the number of days the city could send crews out to mow. They only made it through the list two and a half times, meaning some of the streets division’s parts of the city got mowed either two or three times this summer.

So while the perceived disparity between the north and south sides of the tracks may not be the city’s doing, Williams stands by his eye test results showing a difference between the city’s upper and lower parallels.

“They have said that for years,” she said of the difference between north and south Gillette.

“My brother lives on the north side of town and he always says, ‘I’m from the wrong side of the tracks.’ People refer to themselves as that because it does seem like the south side is favored just a little bit more. Even in upkeep.”

Having too much artwork displayed in a community could be deemed a good issue to have. Like just about any city, Gillette has its pretty parts and its less pretty parts. Hearing Williams talk about it, nobody is to blame. But for it to change, he said the city and community need to acknowledge the difference and fix it.

“I just hope they do it right. Gillette’s not known to do things half. If we’re going to do it, let’s do it right,” Williams said. “Then as we drive down the overpass, to the right, to the left, it will look pretty. It will look nice. But as of now, that doesn’t exist.”

“It is what it is. Nobody did it on purpose, it’s just how it ended up.”