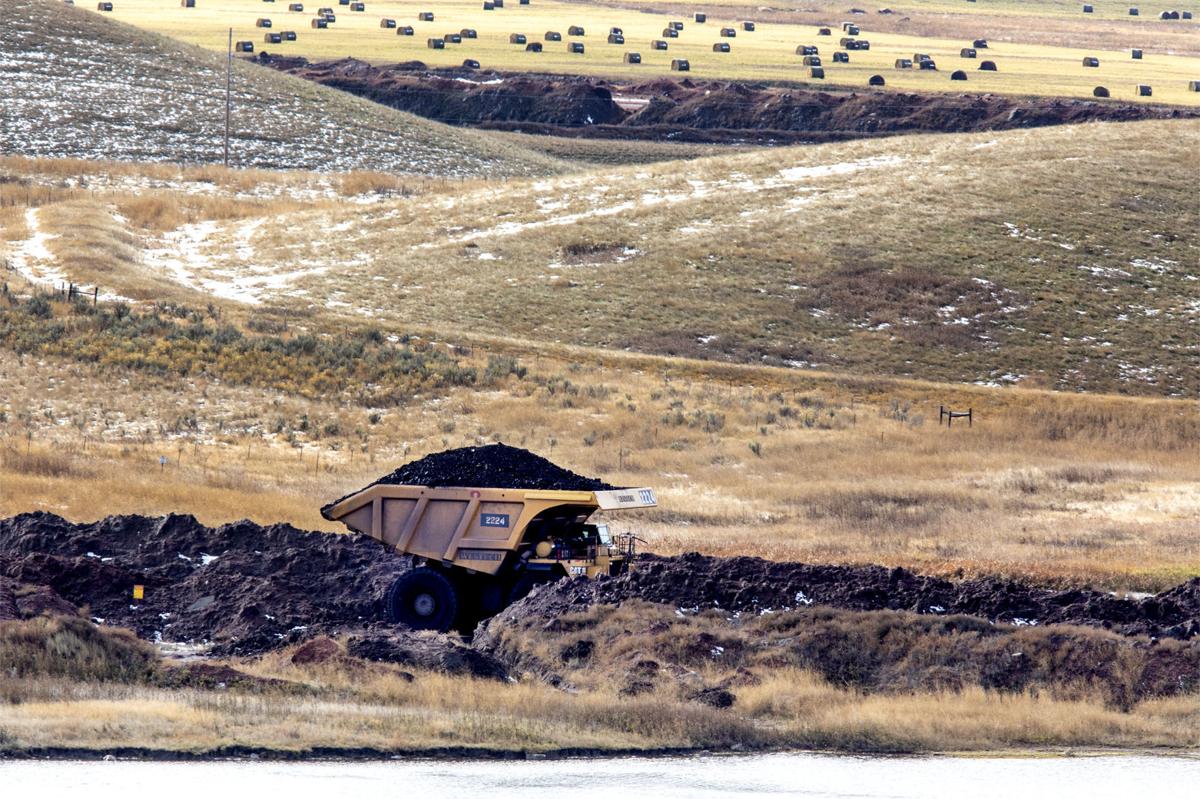 A full haul truck transports coal at the Eagle Butte mine north of Gillette on Monday. A skeleton crew has been producing some coal since the mine locked out most of its employees and its owner, Blackjewel LLC, filed for bankruptcy. Workers are being called with offers to return for new owner Eagle Specialty Materials. 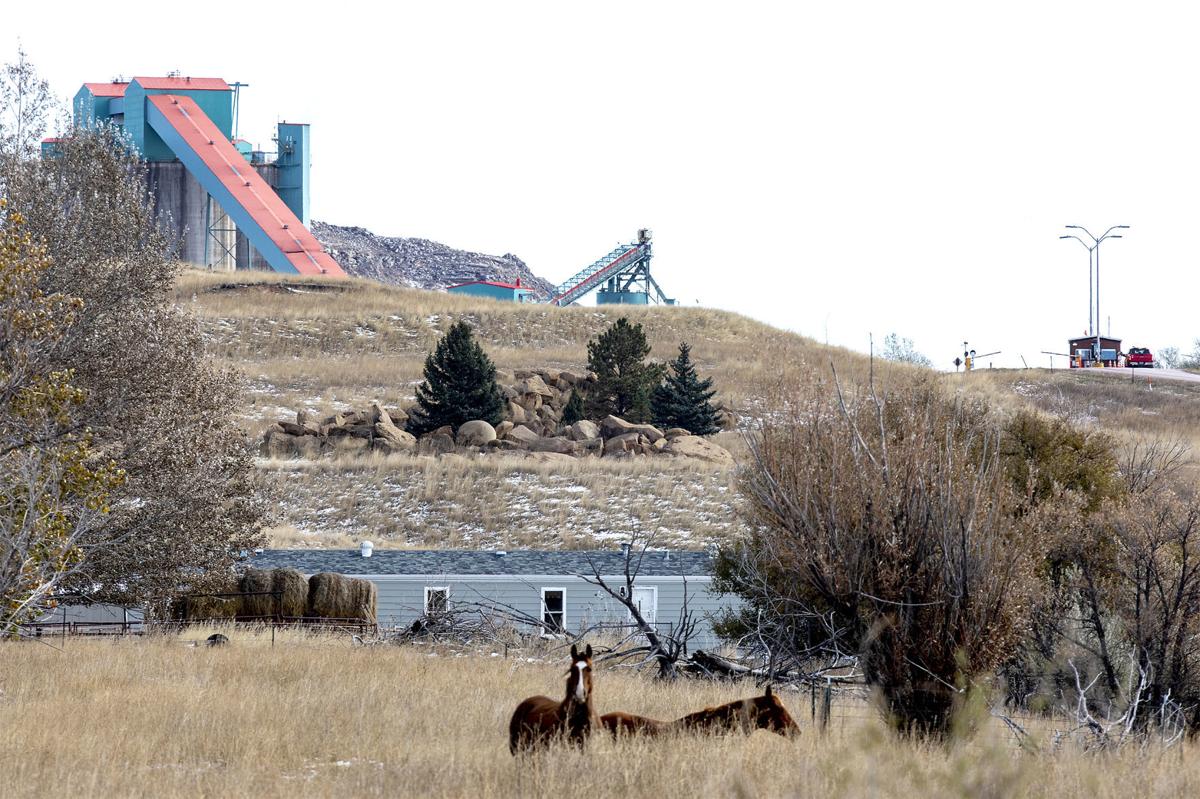 Activity at the Eagle Butte mine — along with its sister mine south of Gillette, Belle Ayr — is expected to pick up its pace considerable over the next days and weeks as former Blackjewel workers are called back for new owner Eagle Specialty Materials. 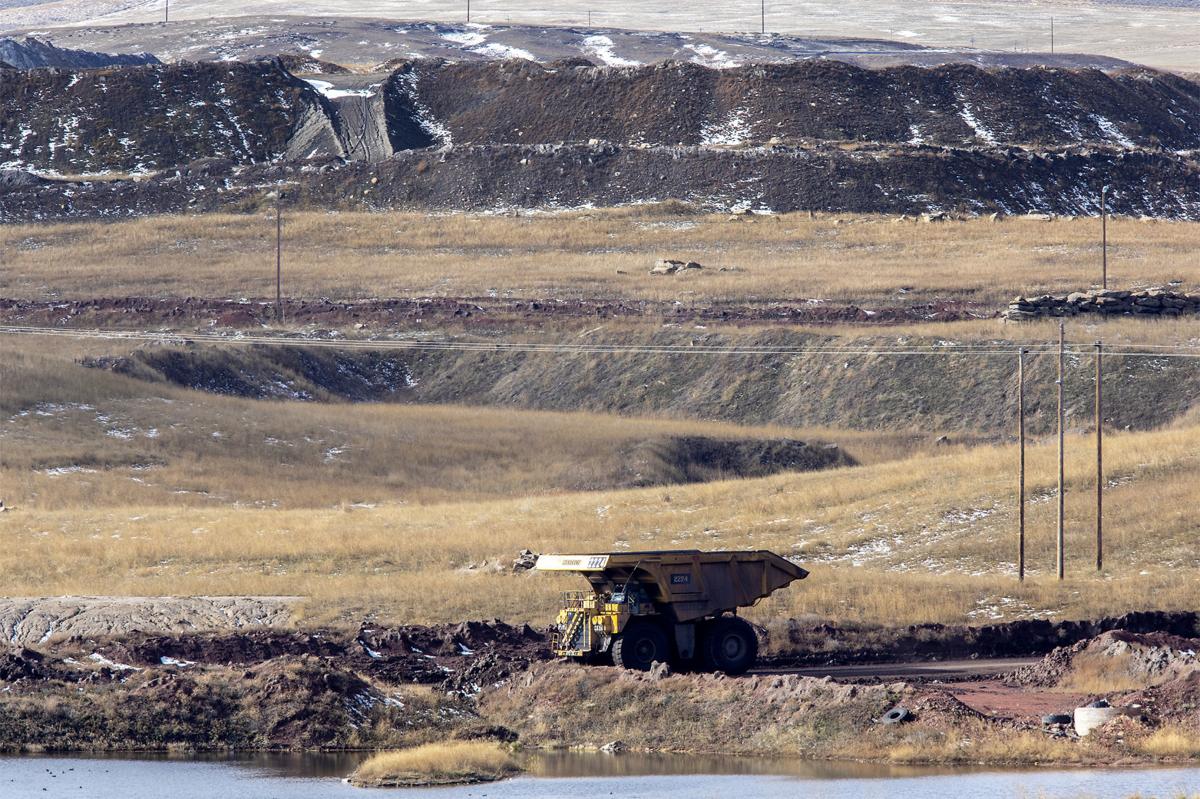 A coal truck heads out into the Eagle Butte Mine on Monday. 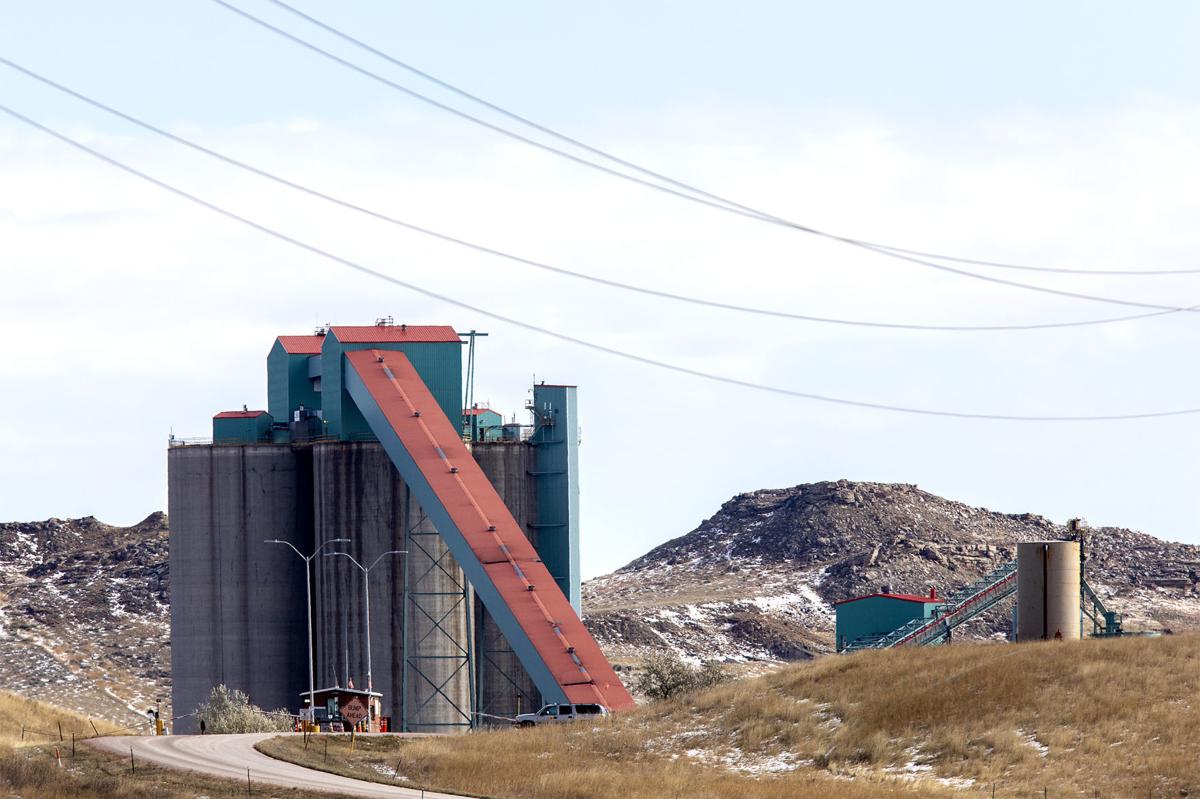 The Eagle Butte mine shows little activity Monday as former Blackjewel LLC workers are being called with offers to return for new owner Eagle Specialty Materials. 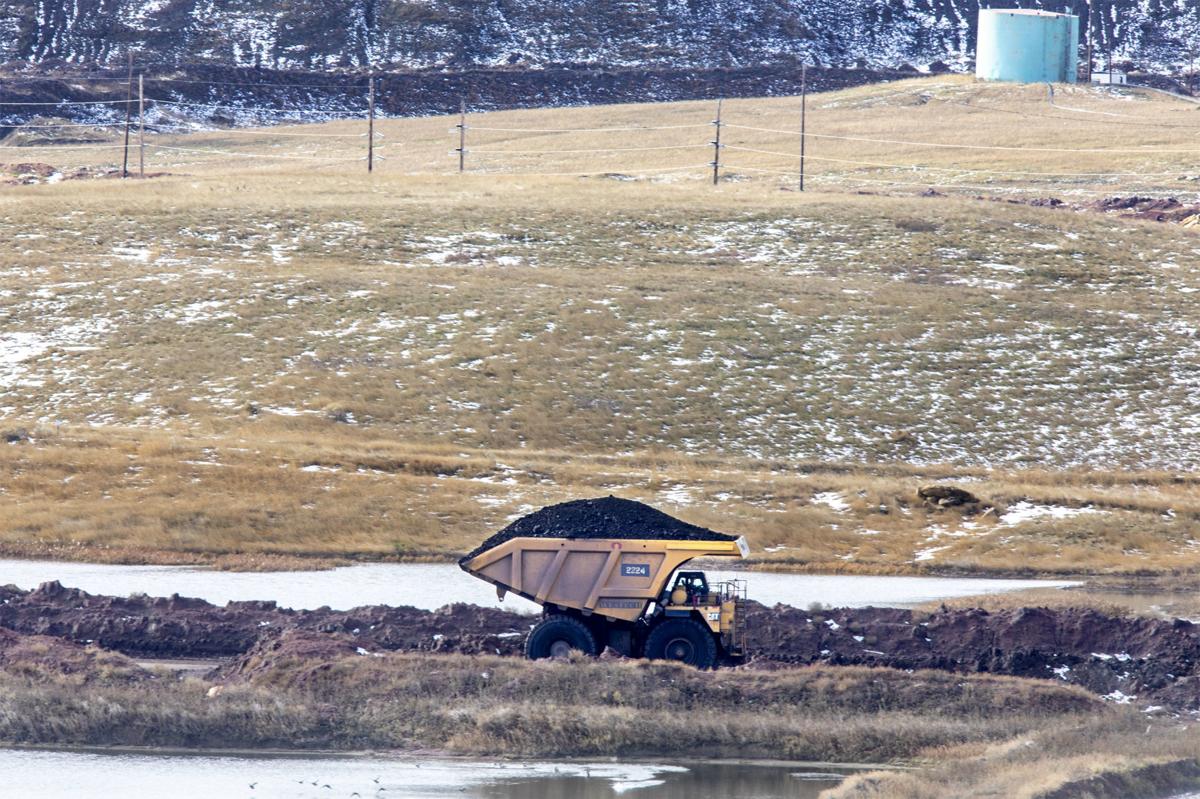 A coal trucks heads back from the mine with a full load Eagle Butte on Monday.

A full haul truck transports coal at the Eagle Butte mine north of Gillette on Monday. A skeleton crew has been producing some coal since the mine locked out most of its employees and its owner, Blackjewel LLC, filed for bankruptcy. Workers are being called with offers to return for new owner Eagle Specialty Materials.

Activity at the Eagle Butte mine — along with its sister mine south of Gillette, Belle Ayr — is expected to pick up its pace considerable over the next days and weeks as former Blackjewel workers are called back for new owner Eagle Specialty Materials.

A coal truck heads out into the Eagle Butte Mine on Monday.

The Eagle Butte mine shows little activity Monday as former Blackjewel LLC workers are being called with offers to return for new owner Eagle Specialty Materials.

A coal trucks heads back from the mine with a full load Eagle Butte on Monday.

Dozens of former Blackjewel LLC coal miners are getting the calls they’ve been waiting nearly four months for: Come back to work.

Nearly 600 workers at the Eagle Butte and Belle Ayr coal mines in Campbell County have been locked out of their jobs since Blackjewel filed bankruptcy and abruptly shut down the mines July 1. On Friday, the sale of the nation’s fourth and sixth most productive coal mines in 2018 closed and new owner Eagle Specialty Materials has had the mines’ local management teams calling locked out workers with offers to return.

“Yeah, I got a call and so did a lot of my friends who used to work for Blackjewel,” said Christopher Orchard, a former mechanic at the Belle Ayr mine.

Orchard was hired by Cloud Peak Energy less than two weeks after the Blackjewel lockout and said he turned down ESM’s offer to return.

He said the pay is better where he’s at, that he believes Cloud Peak is a better run company and he feels more secure and safe working there.

“I know so many (former Blackjewel employees) still have some bitter feelings about the way it all went down,” Orchard said, adding that doesn’t mean Eagle Specialty Materials will treat employees as badly as former owners Blackjewel and Contura did.

“At least at the moment, there’s not a warm, fuzzy feeling about the whole thing,” he said. “I’ve been at Black Thunder (mine) and Blackjewel and other mines. I’ll tell you, the difference is Cloud Peak is much more professional, much more safety-oriented. Blackjewel was more of a let’s get-’er-done and take some risks.”

Orchard said the offer he and other former Blackjewel workers are getting is to return at their former pay rate, plus 4%. Also, while they won’t be paid for accrued vacation and other benefit time for the 114 days they’ve so far been out of work, they’ll return with their previous levels intact.

Also, he said the health insurance plan “for the meanwhile, at least” will be the same as they had under Blackjewel.

During the sale process, Eagle Specialty Materials also said it would pay up to $1.8 million to cover unpaid wages and other benefits Blackjewel workers were owed when the lockout began.

Orchard said he asked about that, but was told that “they weren’t willing to talk about that or when that would be. They wouldn’t discuss anything other than the offer and whether you would be coming back.”

Although he’s moved on, Orchard said he still wants what Blackjewel owes him.

“It would be nice to get what I worked for,” he said. “I even worked some overtime on that last check that I didn’t get.”

Paying those back wages, along with employee contributions to their 401(k) and health savings accounts that weren’t made, may be a small amount of money in the scheme of the whole deal, but it’s extremely important, said Rusty Bell, chairman of the Campbell County Commission.

While glad to see a deal in place that promises to see the mines ramp up to full capacity and employ hundreds of people again, he said the commissioners also “want to make sure that $1.8 million for the back pay also gets paid. That’s important.”

Bell said he checked with the Wyoming Department of Labor about that money for Blackjewel workers and he believes the back pay and benefits will be paid.

The sale of the Powder River Basin mines to Eagle Specialty Materials, an affiliate of Alabama-based FM Coal, was closed Friday and announced Monday morning by Contura Energy, which previously owned the mines and still held the permits and reclamation obligations attached to them.

The first sign the sale had closed came Friday afternoon when Campbell County was paid $13.5 million by Contura. That payment was part of the deal to settle a $15.1 million production tax bill with the county and was to be paid upon the sale closing.

Contura originally owned the Wyoming mines after spinning off from Alpha Natural Resources as a stalking horse bidder in its 2015 bankruptcy. In December 2017, it sold Eagle Butte and Belle Ayr to Blackjewel in a transaction that had Blackjewel assume Contura’s debt associated with the mines.

Eighteen months later, Blackjewel not only hadn’t paid the debt it assumed, the debt had grown to more than $100 million owed in federal, state and local royalties and taxes along with millions more owed to vendors.

Contura bought the mines back from Blackjewel this past summer during its bankruptcy sale, but couldn’t come to an agreement with the federal government over unpaid royalties needed to close the deal. Instead, Contura found another buyer in Eagle Specialty Materials.

“Closing this deal with Eagle Specialty Materials brings about a positive result for our company and the many stakeholders involved in this transaction,” said David Stetson, Contura’s chairman and CEO. “In our view, this transaction represents a best-case-scenario outcome to a lengthy and uncertain process, putting the mines in the hands of an operator with a long-term interest in the Powder River Basin, and getting hard-working coal miners back on the job.”

As part of the deal, Contura is paying ESM $90 million to assume the $238 million worth of reclamation obligations attached to the mines. Contura paid $81.3 million of that upon closing and will put another $8.7 million into an escrow account that will be used to make a payment on a federal royalty claim against Contura Coal West.

Eagle will pay Blackjewel $16.2 million and has agreed to pay off 50% of the outstanding production taxes it owes Campbell County. Moving forward, it also will pay those ad valorem taxes monthly instead of 18 months after the fact as is allowed by state law.

Who is FM Coal?

FM Coal was incorporated in 2017 and owns more than 20 mining properties and operations in Alabama. Eagle Specialty Materials was formed last month to be the operator of Blackjewel’s Wyoming mines.

Its CEO, Michael Costello, visited with the Campbell County Commission before the sale and said the company shares a vision of being a responsible coal operator and will be involved in the community, Bell said.

Repeated attempts to reach Costello about the sale and Eagle Specialty Materials’ plans for the mines were unsuccessful. Also, an emailed list of questions wasn’t responded to by press time.

Along with Costello, a filing with the Wyoming Secretary of State’s Office lists Jeoffrey Pilon as ESM’s registered agent in the state. A former Blackjewel executive, Pilon listed his in-state address as the Belle Ayr mine and a Blackjewel email address. The location of FM Coal’s home office also is Costello’s home in Ohio.

It would be unfair out of the gate to compare FM Coal and Eagle Specialty Materials with Contura and Blackjewel, which have a short and volatile track record in the Powder River Basin of not paying vendors and piling up huge tax and royalty debts, said Shannon Anderson, an attorney with the Sheridan-based Powder River Basin Resource Council.

A land-use watchdog group, the Resource Council has been critical of both Contura and Blackjewel in the past, including protesting a proposed transfer of Contura’s state reclamation bonds to Blackjewel.

Anderson said there’s a lack of information about Eagle Specialty Materials and FM Coal that concerns her organization.

“Contura with this deal is basically walking away from any (obligations) from Dec. 8, 2017, on,” she said. “Now we’re left with Eagle Specialty Materials, and we’ll see if they can deliver. But we have no idea about these guys. They don’t even have a business address, but we’ll see how this works.”

Not all of the former Blackjewel workers have been as fortunate as Orchard to find another high-paying mining job in the PRB, she said.

“Some people are desperate to go back, that’s for sure,” Anderson said. “The question is, are they desperate enough to forget the last year and a half?”

Eagle Specialty Materials has closed its deal to buy the Eagle Butte and Belle Ayr coal mines in Campbell County.