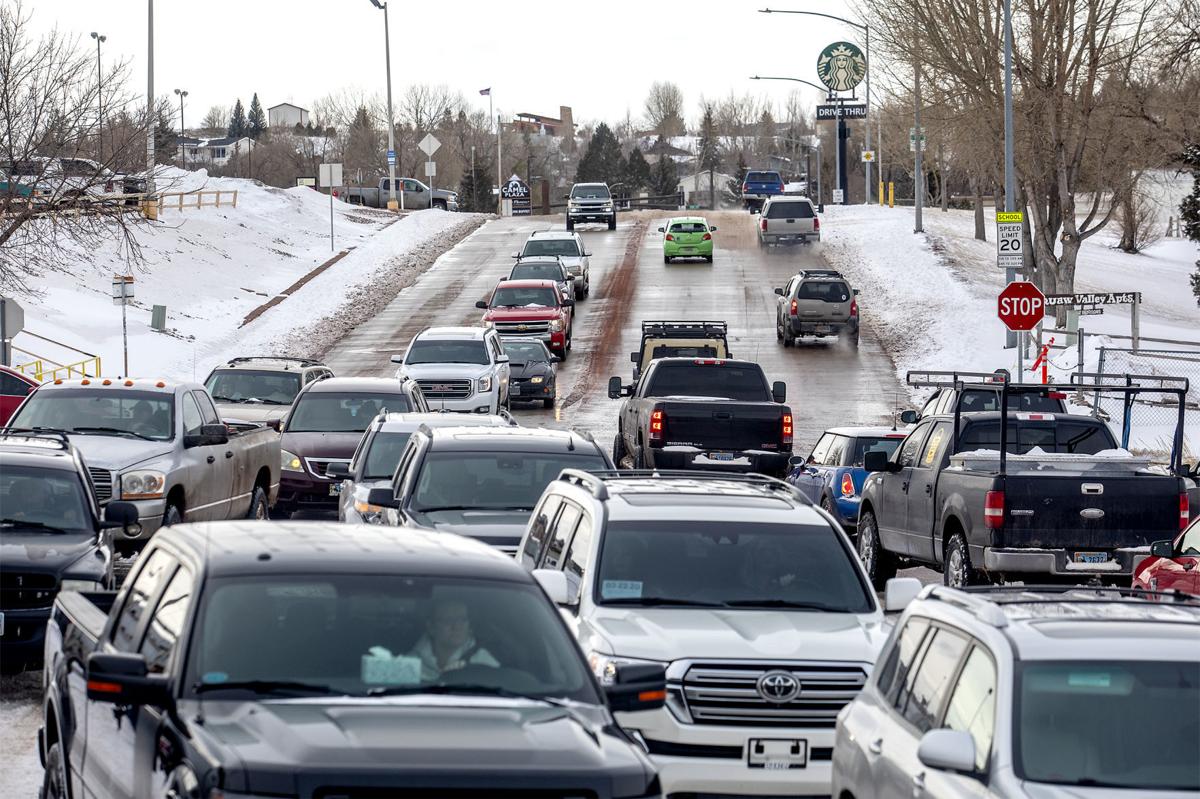 Vehicles make their way out of the Campbell County High School parking lot onto Camel Drive after school was dismissed Monday. Residents spoke out during a Monday evening public meeting about traffic problems on the road that runs from Highway 59 to the school. 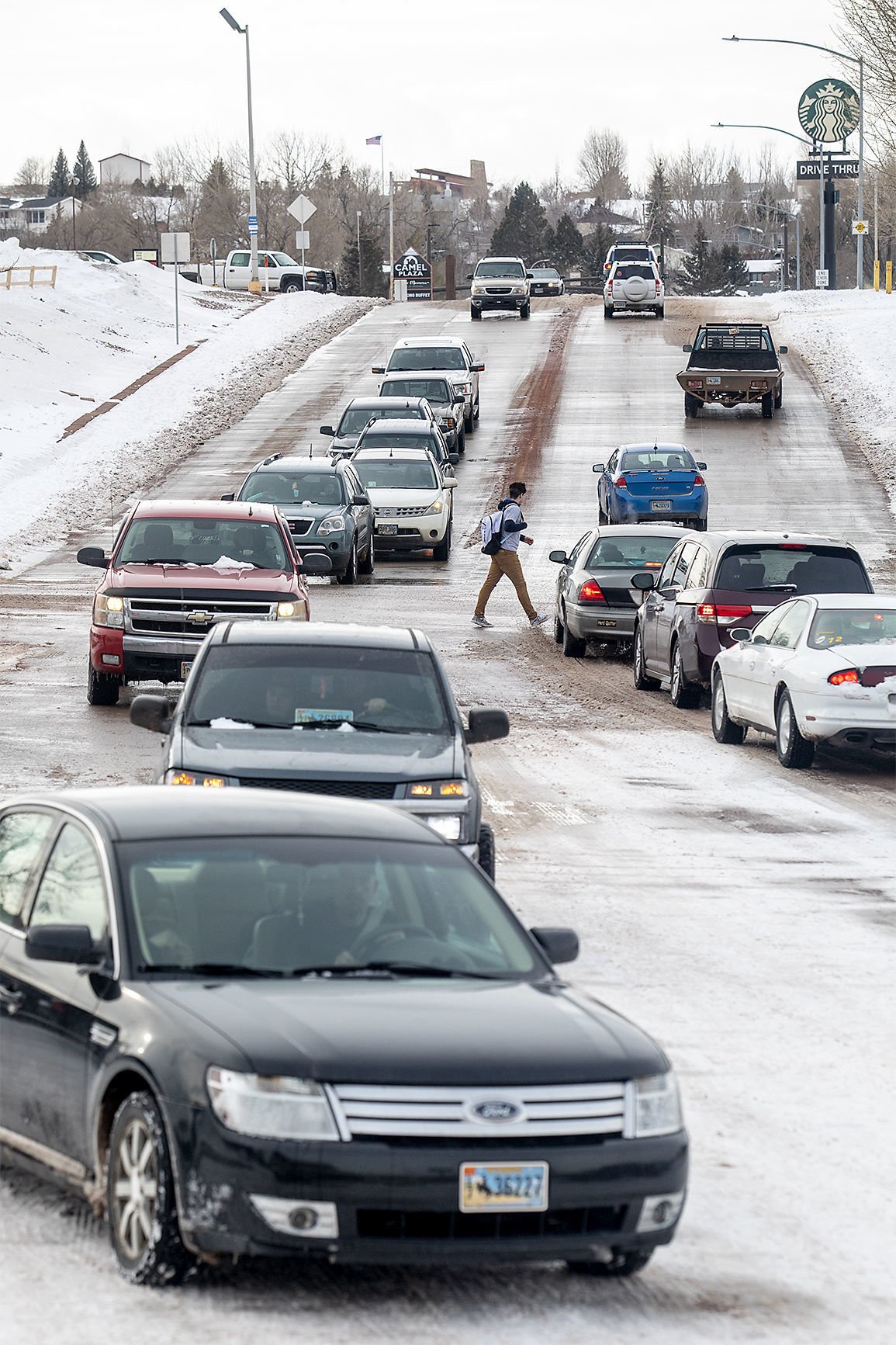 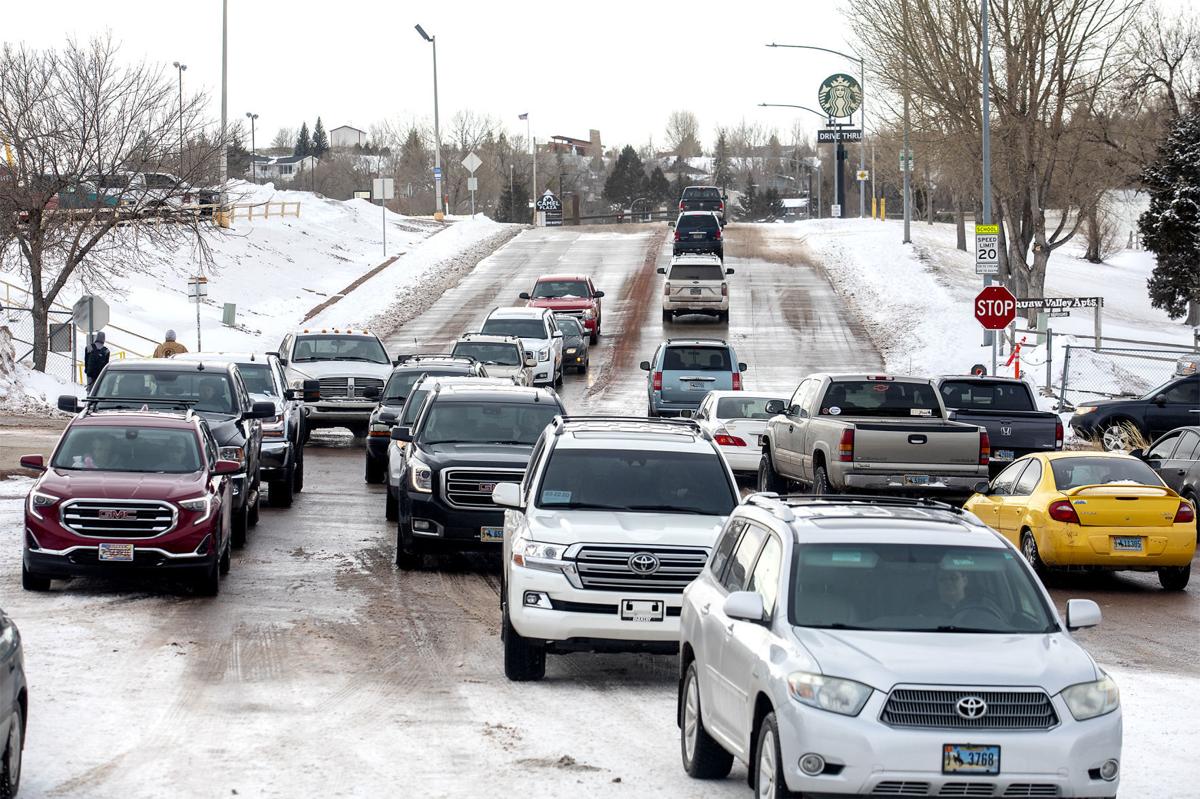 Vehicles make their way out of the Campbell County High School parking lot onto Camel Drive after school was dismissed Monday. Residents spoke out during a Monday evening public meeting about traffic problems on the road that runs from Highway 59 to the school.

She had a hand-drawn map with Hot Wheels cars as props to showcase her frustration with the congestion on Camel Drive, particularly by Starbucks just east of the road’s intersection with Highway 59.

“I’m waiting to come out to go home,” she said about the crowd of cars she sits behind each time she leaves Peak Fitness and Wellness.

She used each car to demonstrate the long lines the coffee shop has and how dangerous trying to get out has become. She suggested the city create some form of roundabout connecting Camel Drive Plaza near Little Caesar’s Pizza.

Eichbush was not the only resident to venture out into the blowing snow on slick roads on Monday evening to express concerns at Monday’s Camel Drive open house.

Anni Stafford, co-owner of part of the Central Square Plaza and Hand Therapy of Wyoming, also said she’s frustrated with the traffic stemming from Starbucks.

“We have had multiple people almost get in wrecks,” she said.

She said frustrated clients and business tenants have expressed their frustrations about the congestion, whether it is a lack of parking or almost being hit by another driver.

“You’re asking for trouble if you don’t look into something about that lack of safety,” she said.

Stafford said all she wants is to talk with the owner of the building where Starbucks operates.

“I appreciate your comments because you are reinforcing some of the things I have been looking at and seeing,” said Josh Richardson, project manager with the city’s engineering department.

He added that he will do what he can to facilitate a conversation between the owner of the Starbucks building and nearby businesses.

“The city is willing to facilitate, but we can’t cause things to happen on private property,” Richardson said. “I’d be fine in getting ahold of the building owner to see if we can get some conversations.”

The issues surrounding Starbucks is part of a problem the city is trying to address, which is to find ways to ease the daily gridlock where Highway 59 and Camel Drive meet.

The city recommends adjusting the striping on Camel Drive and add signage to clear the left turns into the first driveway east of 59 to the north.

“I don’t think it will help our problem, (but) it may be the beginning of fixing a problem,” Stafford said.

While it won’t guarantee anything, the proposal would add a single lane and make it more constant with the speeds that drivers go.

“What we’re working at is to do something that starts to solve the problem,” Reynolds said.

Other suggestions the city has received from residents and will consider are:

City staff will discuss the ideas with officials, then meet with the Wyoming Department of Transportation before conducting an analysis of the traffic on Camel Drive.

Get a chance to weigh in on proposed Camel Drive project

I used to live and work in that area at the apartment complex and I think constructing Green Avenue between 12th and Camel drive is the best idea. It would keep most traffic out of the high school parking lot as well. Maybe even incentivizing Star Bucks to move..