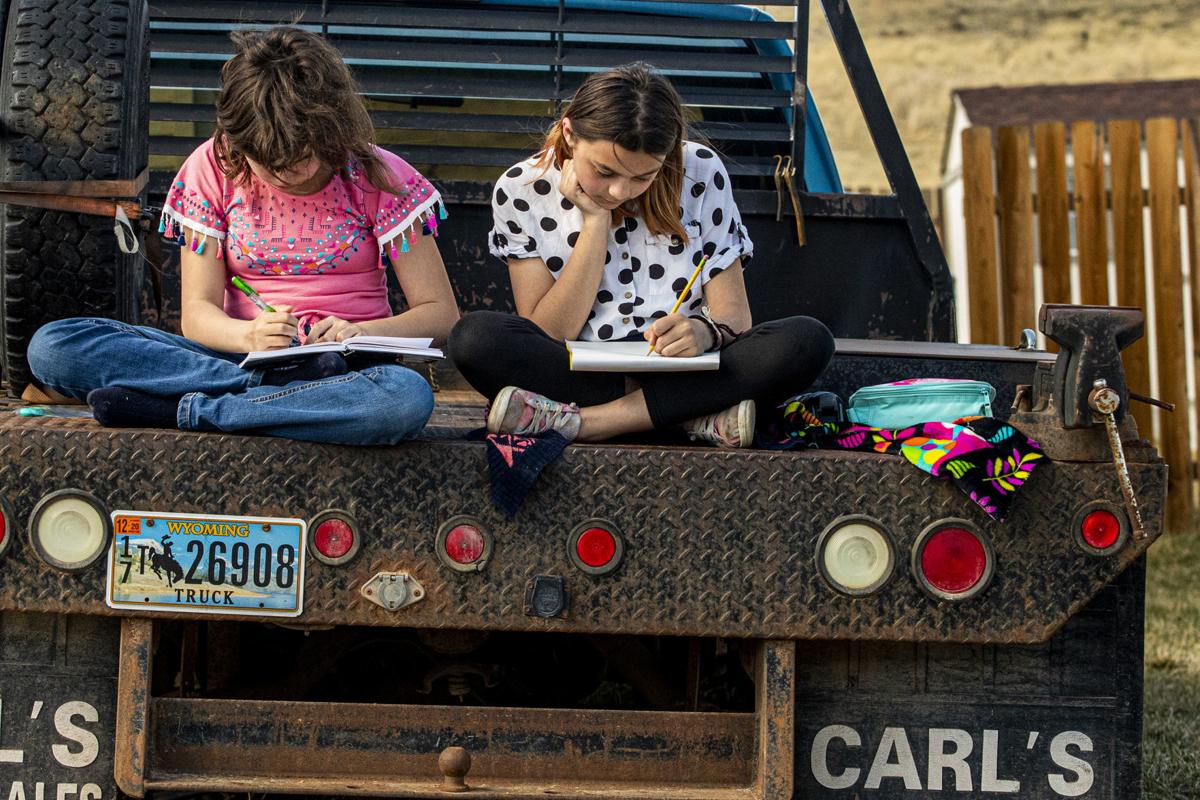 With the sun shining brightly and still plenty of their schoowork to get done, Elizabeth Fiddler, left, and Ryli Wingfield use the tailgate of a work truck as a remote classroom to work on an art project Tuesday afternoon. 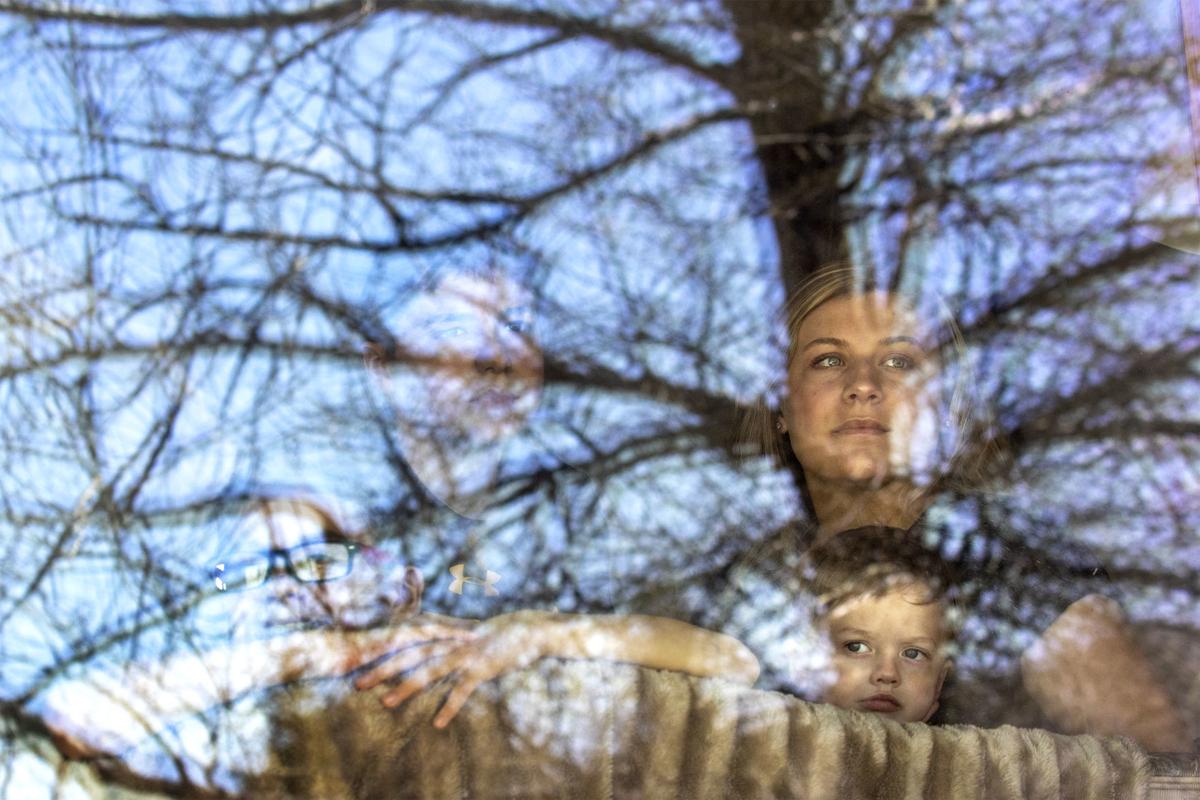 Angela Youngs, 18, Luke Youngs, 3, Alec Youngs, 11, left, and Austin Youngs, 14, look out their front window for a portrait on Wednesday. The family has been stuck inside most of the time since schools were shut down as coronavirus began to spread, and have had to find new ways to entertain themselves.

With the sun shining brightly and still plenty of their schoowork to get done, Elizabeth Fiddler, left, and Ryli Wingfield use the tailgate of a work truck as a remote classroom to work on an art project Tuesday afternoon.

Angela Youngs, 18, Luke Youngs, 3, Alec Youngs, 11, left, and Austin Youngs, 14, look out their front window for a portrait on Wednesday. The family has been stuck inside most of the time since schools were shut down as coronavirus began to spread, and have had to find new ways to entertain themselves.

People sometimes wait on hold for hours to be helped and an unprecedented number of first-time filers for unemployment have the Wyoming Department of Workforce Services working overtime to deal with claims mostly from people out of work because their employers have been closed because of COViD-19.

“The numbers are up dramatically, three-fold and at times eight-fold, but that’s happening all over the country,” said department director Robin Cooley during a Wednesday afternoon coronavirus press briefing hosted by Gov. Mark Gordon.

Because many of those filing unemployment claims haven’t done so before, “they don’t know how to handle the process,” she said.

Cooley acknowledged people sometimes have to wait on hold for hours or get busy signals and can’t get through at all to have their questions answered.

“We know the frustration,” she said, adding that people can file their claims online for the best results.

Her department also is moving people around to handle more calls and has added more temporary staff to beef up the capacity of the call center, Cooley said.

It’s one symptom of a larger COVID-19 problem in Wyoming, and one that Cowboy State residents shouldn’t dismiss because the state overall has had low numbers of confirmed cases and is the only U.S. state without a coronavirus-related death, Gordon said.

“My heart goes out to those who are struggling,” he said. “I hear from them every single day.”

The governor said he gets emails and voicemail messages from people who have lost their jobs because their employers had to shut down to comply with his COVID-19 orders. That includes people who can’t pay their rent or mortgage because they’re suddenly out of work.

What those people are going through “is very much on my mind,” Gordon said. “We are looking at every avenue we have to be able to relieve that pressure. I have unhappily more often than I’d like heard from (those) people.”

While he wouldn’t specifically address an executive order against evicting or foreclosing on people who can’t make their payments because of the new coronavirus, Gordon said he has explored his legal options and what he can and cannot use an executive order for.

“Stay tuned,” he said. “We’ve been working on every legal avenue we can.”

Gordon also said Wednesday that he has signed a letter requesting a federal disaster designation in the face of the pandemic and its effects on the state.

He’s also concerned that needed medical supplies and COVID-19 testing supplies ordered by the state have been diverted by the Federal Emergency Management Agency. FEMA has been seizing supplies and diverting them to coronavirus hot spots around the country.

“What we’ve found and what other states are finding is, unfortunately, more often than any of us would like, is that those are being diverted by the federal government,” Gordon said. Those are “confirmed orders that were supposed to come our way.”

He said he understands that the urgent nature of those high-population hot-spots do take priority, but that FEMA can’t be all-or-nothing in deciding who gets those supplies.

“In the process of making sure of getting all those supplies to the hot spots (let’s not) forget the places like Wyoming, Montana and Idaho,” Gordon said.

Like much of the nation and world, Wyoming continues to be very short on reagents to test for COVID-19, said Dr. Alexia Harrist, the state’s public health officer.

While 3,900 sample collection kits were distributed to counties across the Wyoming, the state Department of Health will continue to prioritize testing because there just aren’t enough materials to process them all, Harrist said.

She also said that while Wyoming hasn’t had a confirmed COVID-19 death, people shouldn’t let down their guard.

“The virus is as serious here as it is anywhere else,” she said. “I think we’ll see deaths here.”

There also are likely many more people with coronavirus than is officially known, Harrist said.

“I can’t give specific numbers on what I think is out there,” she said. “We know there are more cases of COVID-19 than we’ve detected through laboratory testing.”

She also said that the WDH is going to add more information to its daily update on the coronavirus in Wyoming. That will include reports of “probable” cases of patients who exhibit symptoms of the virus and have had contact with a confirmed case. In most of those cases, people are quarantined at home and monitored by local health personnel.

Campbell County Public Health has been reporting something similar for a couple of weeks in local “possible positives.” Unlike the state’s “probable,” cases, the county’s are people who exhibit symptoms and could have the virus, but haven’t been tested or confirmed and are quarantined at home. As of Wednesday morning, Public Health reported it was monitoring 194 possible positive patients while another 107 possible positives have been released from home isolation.

Gordon also acknowledged he’s been getting more national attention as one of a handful of governors who hasn’t yet issued a formal shelter-in-place order basically locking down the state.

He said that orders already in place that shut down public places and non-essential businesses already do basically the same thing. To that point, the governor said that analytics from Google show that movement in Wyoming to access outdoor recreation areas is down 37% and that workplace visits are down 30%.

“That shows more people are staying home, he said, adding that unless you’re coming to or from Wyoming for a business reason, don’t.

“We are asking folks to delay their visits to Wyoming at this time,” Gordon said.

In particular, the governor said he’s frustrated at the large number of people coming to Wyoming from surrounding states. Colorado, he said, has a shelter-in-place order and that many people from there are driving across the border to get to a less-regulated state and not for business.

Colorado residents especially “seem to be traveling in droves up to Wyoming,” Gordon said. “We’re trying to put a stop to that.”