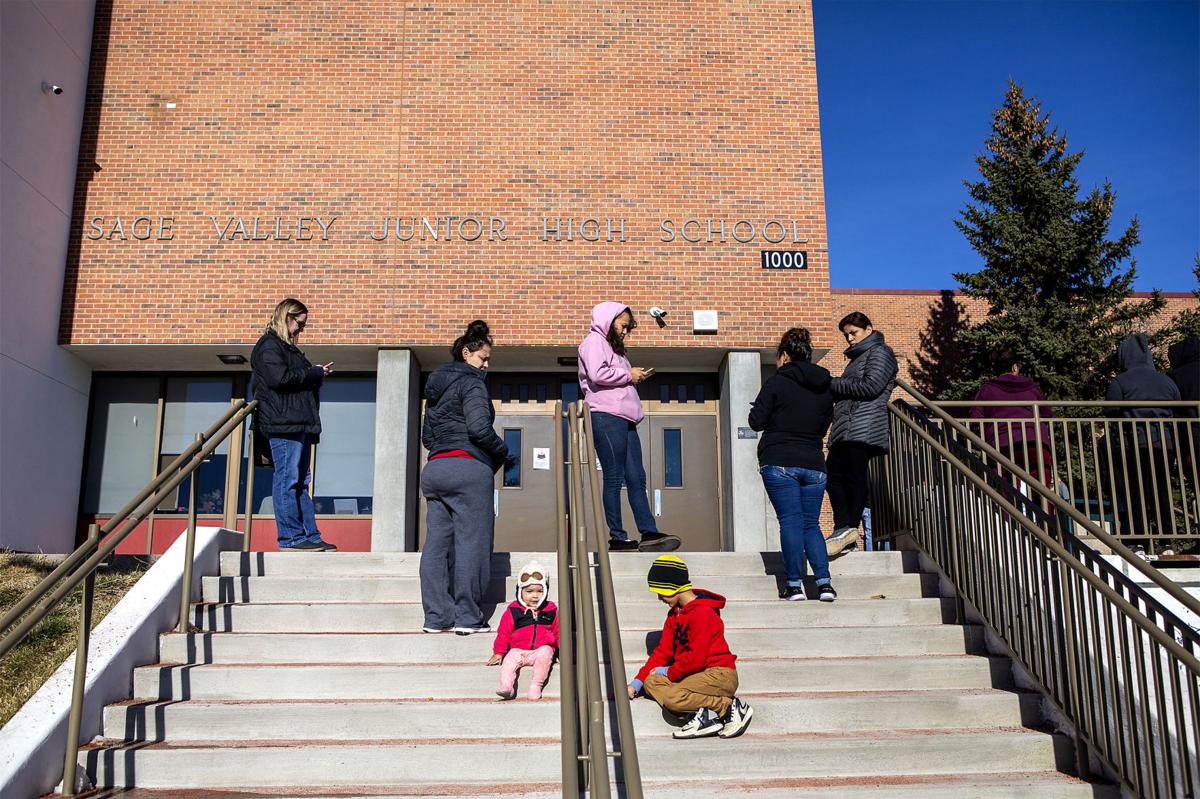 Parents wait outside Sage Valley Junior High School for the end of a school lockdown Nov. 13. A 14-year-old student, Dale Warner, brought two handguns to school and told police he planned to shoot other students and teachers. He's been charged as an adult on nine counts of attempted first-degree murder. 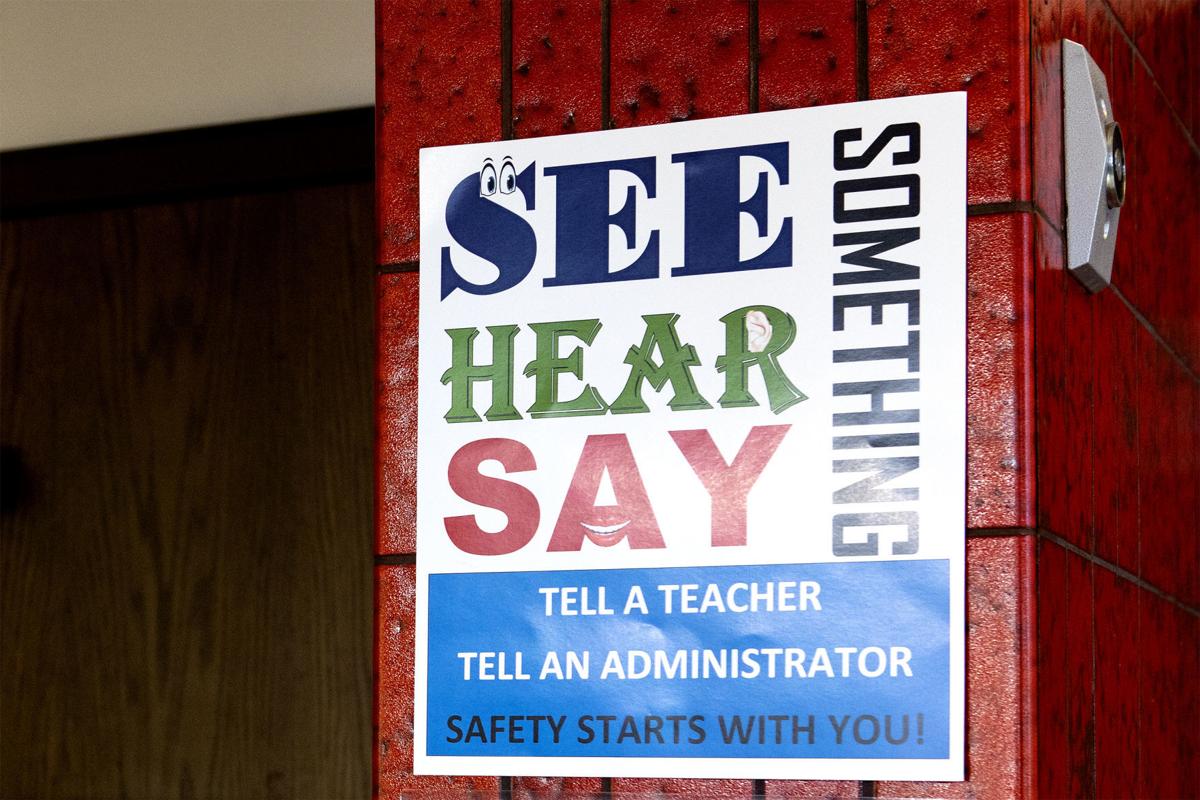 Signs were put up throughout Sage Valley Junior High School after a potential school shooting was thwarted Nov. 13, 2018, thanks to an anonymous student alerting the school principal to a potential threat.

Parents wait outside Sage Valley Junior High School for the end of a school lockdown Nov. 13. A 14-year-old student, Dale Warner, brought two handguns to school and told police he planned to shoot other students and teachers. He's been charged as an adult on nine counts of attempted first-degree murder.

Signs were put up throughout Sage Valley Junior High School after a potential school shooting was thwarted Nov. 13, 2018, thanks to an anonymous student alerting the school principal to a potential threat.

A Sage Valley Junior High student has been bound over to District Court to stand trial after the Gillette Police Department presented evidence that he had brought two handguns and 43 rounds of ammunition to school with the intent of shooting specific students and staff members.

Dale Warner, 14, has been charged as an adult with nine counts of attempted first-degree murder.

Each of the nine counts is for a potential victim Warner is alleged to have targeted.

Warner told Officer Jerry Fitzner, who testified at Friday’s preliminary hearing, that he woke up Nov. 13 and decided to shoot students and staff to honor his biological father, who had recently died and who as a teenager had reportedly took a gun to school.

Warner then explained to Fitzner that he had taken two handguns and ammunition from his father’s truck before getting on the school bus.

Once he arrived at Sage Valley, he told a few friends about the students he planned to shoot. Before first period, he left a 9 mm Springfield XD along with some ammunition in his locker. He also concealed a .40-caliber Smith & Wesson in his waistband and placed rounds in his pocket.

During first period, he Googled “what happens to school shooters” and how he could go to jail, Fitzner said.

Warner’s attorney, Diane Lozano, raised concerns about when during the interview with Fitzner that Warner had been read his Miranda Rights. Circuit Judge Paul S. Phillips acknowledged Lozano’s concern but said he bound Warner over to District Court based on police interviews with other students.

The interviews with other students were conducted by Detectives Jeremiah Wagner and Robert Hannigan. The students said that before first period, Warner showed them the two handguns in a duffel bag and told them about his plans to target specific staff members and students, some of whom he said had bullied him.

They then saw Warner put the 9 mm in his locker, place the .40-caliber in his waistband and put some ammunition in his pocket. Before heading to class, they went to the bathroom with Warner, who then entered one of the stalls. Although the friends didn’t see him load the gun, they told officers they heard and observed bullets fall to the floor.

The friends told Wagner and Hannigan they hadn’t reported Warner’s actions because he had threatened to harm them.

While Warner was walking through the hallway shortly after first period began, he showed another student the gun and said he was going to get in trouble. Warner told the student not to tell anyone, so the student returned to class. The student then changed his mind and went to tell Principal Terry Quinn, Hannigan testified.

In response, Quinn went to Warner’s first-period classroom, where he removed the gun from Warner’s waistband and where Warner handed over bullets and a magazine.

Sage Valley was in lockdown for about 90 minutes and no one was hurt.

“I think if there ever was a case of overcharging, this would be it,” Lozano said in her closing argument.

However, Campbell County Chief Deputy Attorney Nathan Henkes said that Warner’s actions, which four students provided evidence of, showed he had a plan and a motive and had taken significant steps toward killing nine people.

Much of the response to the Sage Valley incident has focused on the law enforcement investigation, on speculation about Warner and his family and on the way in which Quinn’s and a student’s actions may have prevented a tragedy.

“There are two sides to every coin, and based on what I hear and what’s in the newspaper, it’s one-sided,” said Warner’s mother, Andrea Warner, who came forward before Friday’s hearing to talk about her son. “I think he should have an opportunity to have a voice, and if he can’t be his voice, then I’ll be his voice for him.”

Warner was born in Eagle Butte, South Dakota, on the Cheyenne River Reservation. In 2014, he and his brother were adopted by Andrea ’s husband, Scott Warner, and his former wife. Since Scott’s divorce and remarriage to Andrea, she has helped raise the brothers.

The family is very close, going on camping trips together, having pull-up competitions and generally staying active, Andrea said. Warner, who has a handful of close friends, was on football and basketball teams. He earned good grades and, as far as she knows, was never in trouble at school.

“He’s a good kid,” she said. “So all of this that’s going on now is just dumbfounding to me. It makes no sense.”

She said Warner has been diagnosed with reactive attachment disorder and fetal alcohol syndrome, both of which make it difficult for him to process emotions, among other things. He has been receiving some treatment, but has continued to struggle partially because his family can’t afford all the resources he needs.

“As his mother, I know him like nobody else does and I know he’s got a good heart and I know that he has things that need to be addressed with his brain,” Andrea said. “I just want people to know that he’s not this monster, because I hear things.

“He’s a kid that has mental (health) issues that needed to be addressed, and I think if we were given the opportunity to get that taken care of beforehand, we wouldn’t be in the situation we’re in now.”

Warner’s family is compiling documentation to show the judge that Warner should have a psychological evaluation to determine if he is able to stand trial.

Because the case is pending, Andrea said she can’t speak much about what happened Nov. 13 and she and her family have been told not to discuss what happened with Warner during their jail visits. However, she did say the morning of Nov. 13 was a typical morning, with Warner getting ready for school and saying goodbye before heading off.

“He showed no signs, nothing to build up to what happened,” she said. “It was a huge blindside. It still is. ... He’s just a little kid. … He’s not this huge threat that everyone thinks he is. If he were a huge threat, then I think things would have turned out differently. But it’s not in his nature.”

Andrea said that as his mother, the evidence against Warner, some of which comes from the interview he gave Fitzner, makes no sense to her.

“I have put so much thought into the things he said, and there’s no rational explanation for what he said,” Andrea said. “I don’t know if he was just saying those things to say them … because he doesn’t have the thought process to think things through. I think he thought he was going to get suspended from school or some kind of light punishment.”

Instead, Warner has been in jail since Nov. 13 with no indication of when he might be released.

“I think I’ve cried myself out of tears,” Andrea said. “It’s all hard. It’s hard to look at him on that little video (in the jail). It’s hard to see the tears roll down his cheeks and not be able to do anything about it. It’s hard telling him about things going on here that he can’t be involved in.”

If convicted, Warner could face life in prison. Because Wyoming doesn’t have a juvenile prison, he would be sent out-of-state, likely to Nebraska, until he turns 18.

His family members visit him at the jail as frequently as they can, working to maintain a sense of normalcy and struggling to come to terms with how their lives were upended so suddenly, Andrea said.

Duncan Davidson was at Sage Valley Junior High on that day in November when another student brought guns and ammunition to the school, alleged…