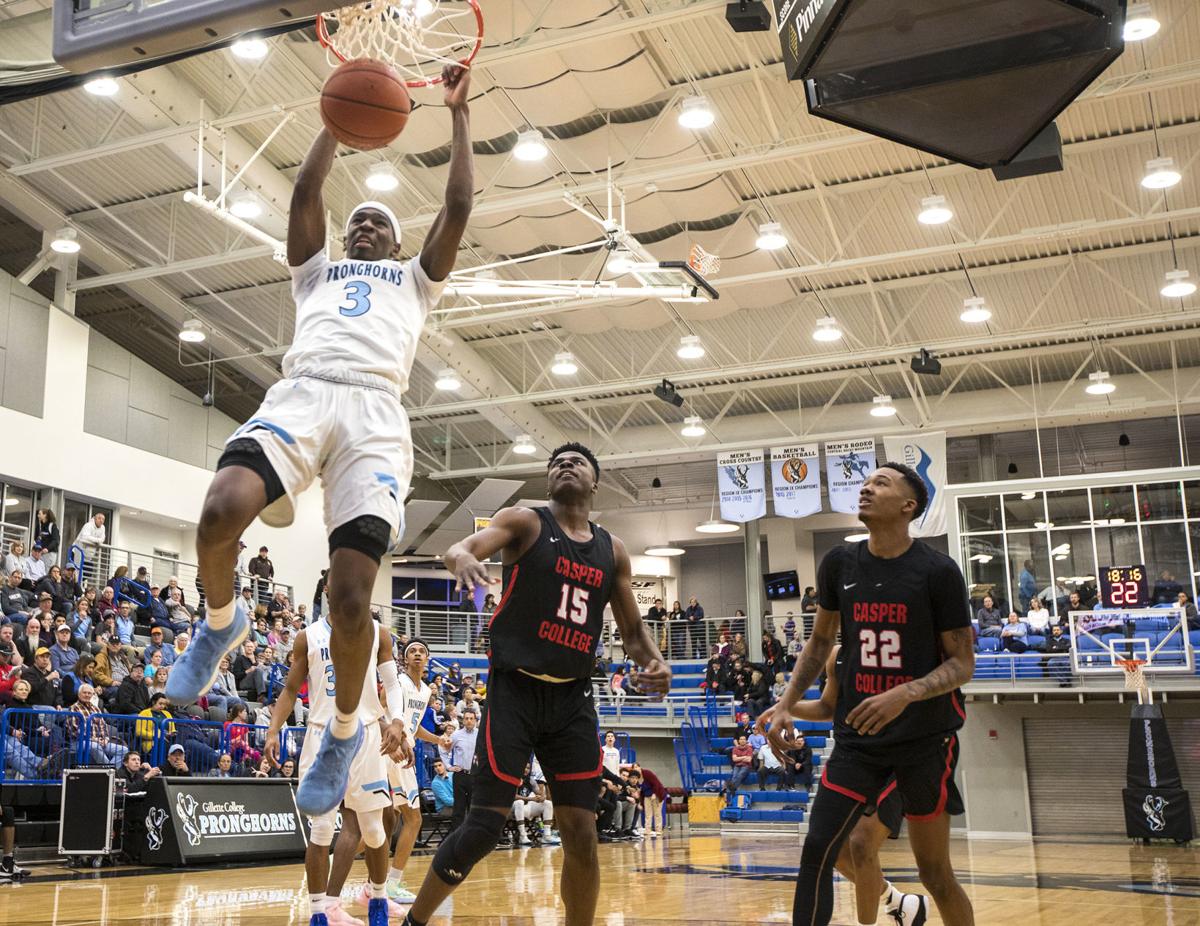 Gillette College men’s basketball player Bradley Akhile dunks the ball during a game against Casper College this past season during a game in front of a packed house at the Pronghorn Center in Gillette.

The sun sets over the new soccer field at Gillette College last summer. Gillette and Sheridan College announced Thursday that all sports would be cut.

Gillette College men’s basketball player Bradley Akhile dunks the ball during a game against Casper College this past season during a game in front of a packed house at the Pronghorn Center in Gillette.

The sun sets over the new soccer field at Gillette College last summer. Gillette and Sheridan College announced Thursday that all sports would be cut.

Tribley said the worry about the Sheridan and Gillette college budget began in February when a $30 million funding request from Wyoming community colleges was denied by the state Legislature. That was before the coronavirus pandemic had taken hold in the United States and well before it hit Wyoming.

Tribley said the administration at NWCCD had hoped something could be figured out other than deep cuts. But when there was no special legislative session was called to address college funding, he said it became apparent that Gov. Mark Gordon was going to tackle the issue of state revenue shortfalls with a more brad focus.

“Cuts to state agencies became more and more apparent through communications from the executive branch and communications from various legislators that cuts are coming. ‘Prepare for a 10% and 20% cut scenario,’” Tribley said. “That’s when my team and I really had to get serious and do the challenging work.”

At a NWCCD board of trustees meeting June 18, a “financial emergency” was declared. It was clear that either a 10% budget cut must be made this year or a 20% cut would come the next, Tribley said.

At the same time around the country, coronavirus is forcing states to already push for a shutdown of college athletics in the fall and beyond. Tribley said that was also a factor in deciding to cut athletics, which saves the district $2.8 million. The district overall is cutting close to $4 million, according to a press release.

The abruptness of the decision, which surprised student-athletes and coaches, was what caught the community off guard.

Mike Hladky, a longtime donor to Gillette College athletics, said he felt “blindsided” by how quickly the cuts happened.

“I have great empathy for them and I apologize for the suddenness,” Tribley said. “All of this was within the last couple of months. It is abrupt and it is very challenging. And for that, I apologize.

“I can’t put it it off for a year. It’s a biannual cut and if I don’t take it this year, I have to take it twice next year.”

Tribley has three daughters, two of whom played collegiate athletics, so he said he aches for “the devastation that they must feel, and their families, to not be able to play.”

“I’ve talked to parents about this and I’m just sorry,” he said. “We were told pretty late in the game that cuts were coming and there would be no special session.”

Tribley said Friday that it would take a $35 million endowment, or some form of sustainable funding, at each school to allow athletic programs to return.

If the district could come up with that money to keep the programs going, it would, he said.

”However hard it is (to reverse the decision), we would do it,” Tribley said. “It’s just about balancing the budget. If we had an ongoing funding source, we would do what it takes. We would turn on a dime.”

Tribley also said Gillette and Campbell County are examples of how a community embraces higher education and makes it happen. But he also acknowledged the sacrifice it would take to save the programs.

“It would take a sustained decision that a certain extent of local revenue would go to the college,” Tribley said.

If a last-minute saving effort isn’t made, Tribley’s long-term plan is to bring athletics back at a Division III classification instead of the junior college Division I level Gillette and Sheridan colleges previously competed in.

One of the first steps in that process is talking to the leadership at regional community colleges, which has begun, Tribley said.

Tribley hopes that more colleges in the region, maybe from Montana, North Dakota and South Dakota, could join together to form a sustainable program.

D III programs bring many benefits to the table during a budget-crunching era. A few of the main areas that save money is with salaries of coaches, athletic scholarships and recruiting budgets.

Tribley said most coaches at the D III level aren’t paid as full-time coaches, but like in high school, full-time faculty who also coach is more affordable.

“I want to make sure I emphasize that none of our coaches are overpaid,” Tribley said. “But the difference is, if you’re engaged in a highly competitive and excellent athletic program at the Division I (level), you really need to resource your head coaches with a full-time head coaching position. … This is more of the norm in our current athletic department.”

In the past, Gillette and Sheridan colleges were allowed to provide athletes with full room and board, tuition and books. Tribley said athletes would still be recruited and offered scholarships at the D III level, but they would be academic scholarships.

By dropping down two division levels, out-of-state recruiting also will decrease. That will save money on things like travel expenses and Tribley said it will “absolutely” bring in more Wyoming athletes to the programs.

“That norm will be community college athletes from our community,” Tribley said. "That's a benefit to this program. We're looking to keep a vibrant athletic program in a sustainable manor. This one's costing us just right around $2.8 million to $2.6 million.

"We just can't sustain it right now, as much as I want to."

Did you come to the college private supporters and ask for donations?

Maybe, just maybe, the Quater cent sales tax would have passed if it would have been kept to just support the colleges!