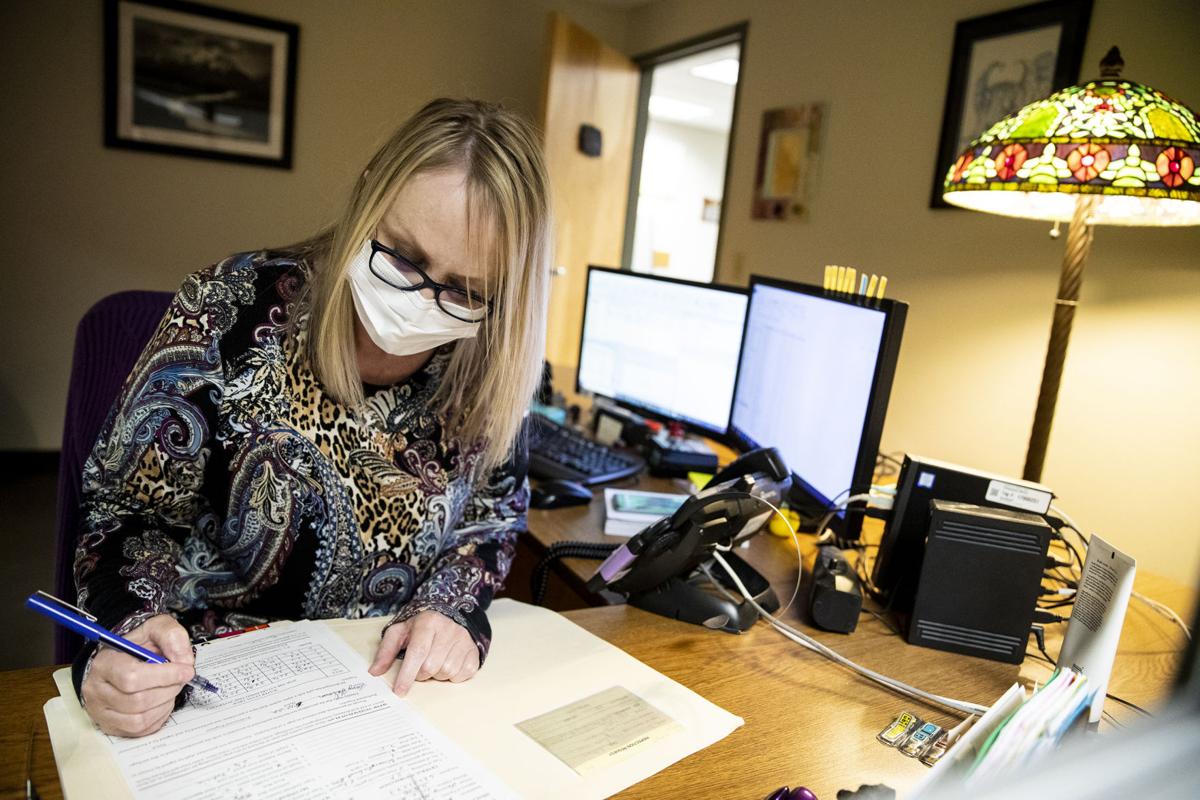 Public Works Department Senior Administrative Assistant Angie Siegel wears a mask at her desk while working in the Campbell County Courthouse on Tuesday afternoon hours after a mask mandate for workers in the courthouse was approved by commissioners. 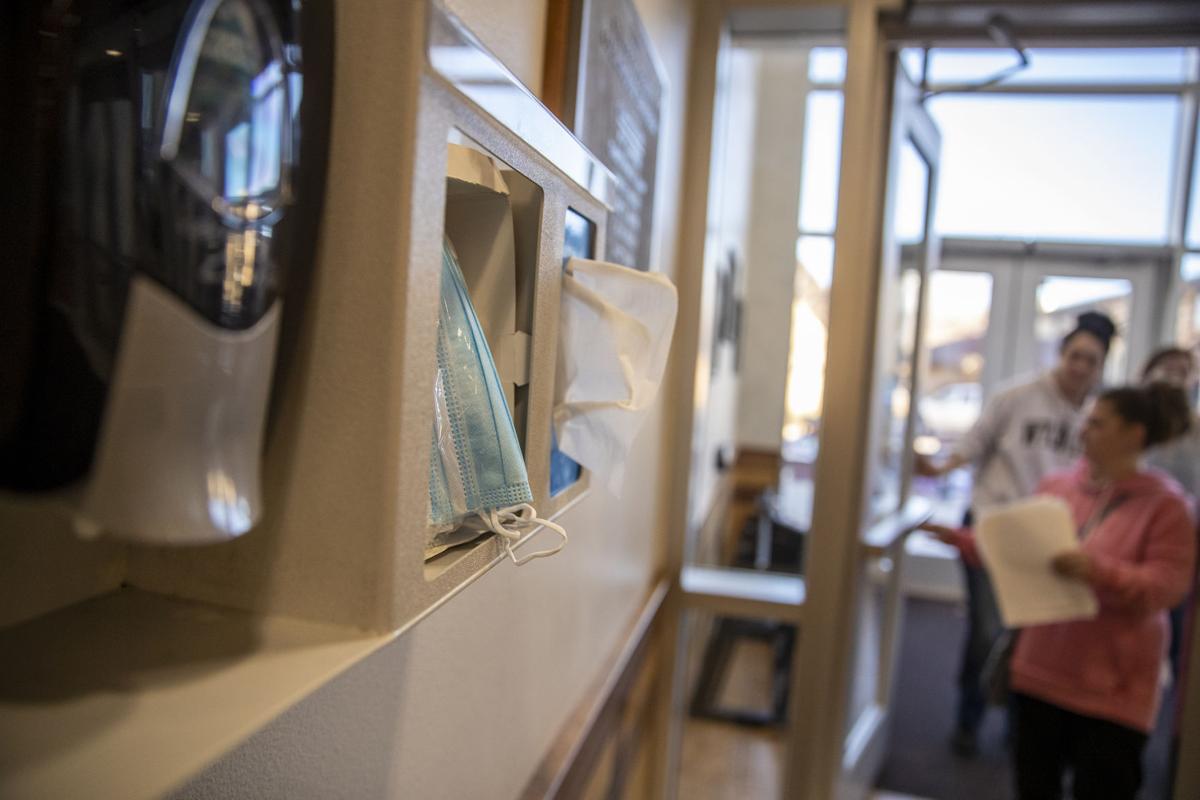 Hand sanitizer, masks and tissues line the wall at the front entrance of the Campbell County Courthouse on Tuesday just hours after a mask mandate for workers in the courthouse was approved by commissioners. 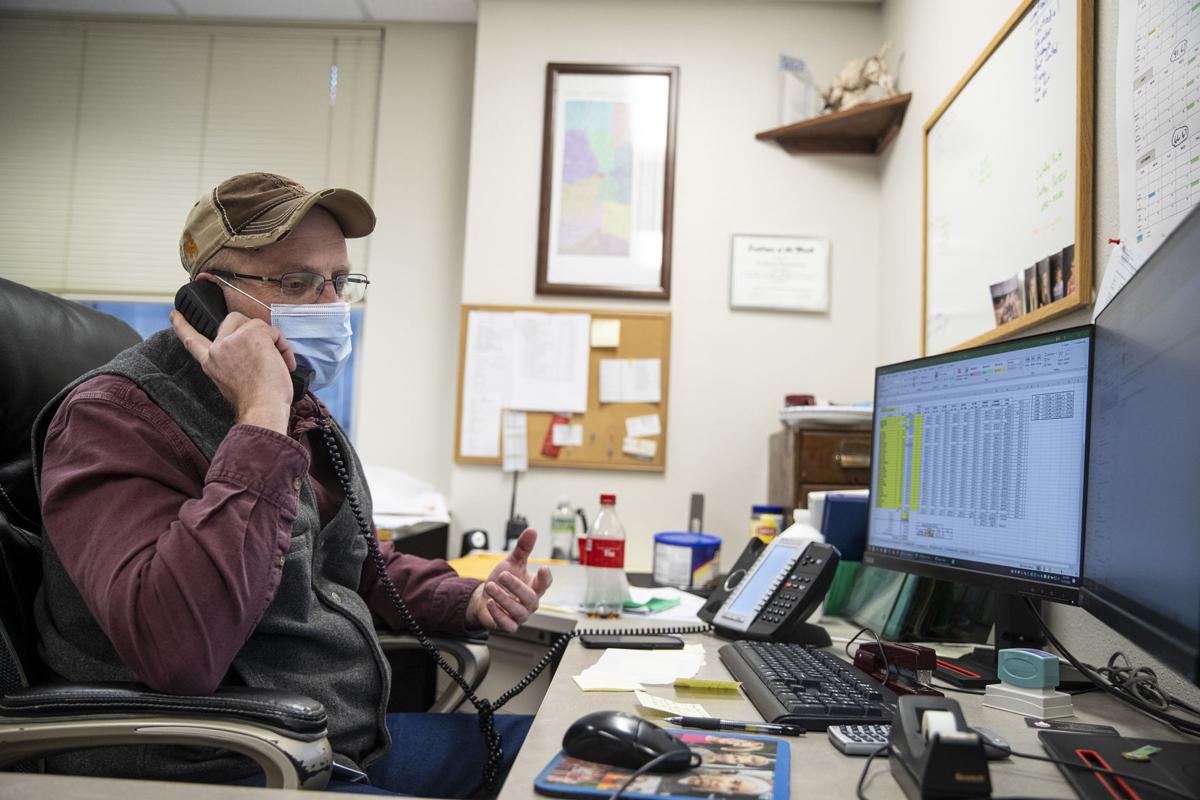 Public Works Department Facilities Manager Bill Beastrom talks on the phone in his office at the Campbell County Courthouse on Tuesday afternoon.

Public Works Department Senior Administrative Assistant Angie Siegel wears a mask at her desk while working in the Campbell County Courthouse on Tuesday afternoon hours after a mask mandate for workers in the courthouse was approved by commissioners.

Hand sanitizer, masks and tissues line the wall at the front entrance of the Campbell County Courthouse on Tuesday just hours after a mask mandate for workers in the courthouse was approved by commissioners.

Public Works Department Facilities Manager Bill Beastrom talks on the phone in his office at the Campbell County Courthouse on Tuesday afternoon.

In response to a dramatic increase in the number of COVID-19 cases in the community, Campbell County Commissioners approved a temporary policy requiring its employees to wear masks, effective immediately.

The policy was approved on a 4-1 vote Tuesday morning, with Commissioner Bob Maul the lone vote against it.

The policy requires employees to “wear a face mask while at work unless they are alone in their office or vehicle.” Exceptions can be made for those who cannot wear a mask because of a health condition. In addition to face coverings, employees will be asked to continue other preventative measures such as social distancing, frequent hand washing and disinfecting surfaces.

The commissioners remain opposed to a countywide mask mandate for the public because they don’t want to dictate the general public’s behavior, but they believe requiring county employees to wear masks is the least they can do to slow the spread of COVID-19.

“I don’t think anyone can ignore the fact that we’ve got a problem, and as a society we need to try to do the right thing,” said Commissioner Del Shelstad.

Brandy Elder, the county’s human resources director, wrote the policy. She said that in the past few weeks, there have been county offices around the state, hers included, that “have been almost entirely shut down because of an exposure, which could’ve been easily prevented had we been taking precautions.”

She now requires her employees to wear a mask when on the job but not in their office.

Public Health was another department that has been hit hard by COVID-19. About half of its 13-member staff, including director Jane Glaser, have been or are out of the office because of the virus.

“I would’ve never in a million years thought I was going to get pneumonia out of this,” Glaser said. “It’s a scary, scary virus and affects everybody differently.”

She said during a Zoom meeting with state health officials and area businesses that six people in her office have or have had the virus.

Some county departments already require employees to wear masks, such as the Recreation Center and Children’s Developmental Services. In those cases, they are required to follow the state’s orders regarding gyms and day cares.

Commissioner Rusty Bell said there are many examples of people who were around a positive case but didn’t have to quarantine because the infected person and the contact were wearing masks.

“Just keeping people at work and not being quarantined just by wearing a mask makes sense,” he said. “I think it’s a no-brainer.”

“It’s time for us to start taking some things seriously without infringing on our businesses being open and our people doing what they feel is right, whether they want to wear a mask or not,” said Shelstad, who had COVID-19 in late October.

People who come into the courthouse and other county buildings will be asked to wear a mask, but they won’t be forced to wear one if they don’t want to.

“We’re going to do what we can without having to mandate (to the public) and become dictators,” said Commission Chairman D.G. Reardon, adding that the goal is to keep employees healthy so they can continue to do their jobs.

“If we’re not here to serve the public, work can’t get done,” he said.

Including state officials approving mask mandate requests in nine Wyoming counties Tuesday, 12 of the state's 23 counties have some sort of mask wearing policy with requests from two other counties pending.

Shelstad said Campbell County's decision is “not a precursor” to a countywide mask mandate. Rather, it’s the least the county commissioners can do to help prevent the spread.

“The governor gave us the unique opportunity to try to control the things that are happening in our county locally,” Shelstad said. “I know initially he didn’t do that, and he’s received a lot of criticism for that, including from myself. So this is an effort for us to try to get a handle on our numbers.”

County Clerk Susan Saunders said she didn’t think employees were getting COVID in the workplace.

“I don’t believe your issue is at work,” she said. “Your issue is with people’s personal lives.”

County Administrative Director Carol Seeger said that while the county can’t control what their employees do once they leave work, requiring them to be masked up at work will better protect them in the workplace and hopefully convince them to take more precautions while not on the job.

For months, the commissioners and governor have preached personal responsibility when it comes to the pandemic.

“If we can’t take these responsibilities on ourselves, possibly the next step from a state level is going to be a mandate that none of us want,” Shelstad said.

See Saturday's weekend edition of the Gillette News Record for a cover story about what level, if any, the COVID-19 surge in Gillette and Campbell County Campbell would need to hit for local officials to consider a mask mandate.

As COVID-19 continues to spread throughout Campbell County, it recently made its first appearance in the county jail.

Typical reactionary gov't decisions...why am I surprised. Thanks, but no thanks...