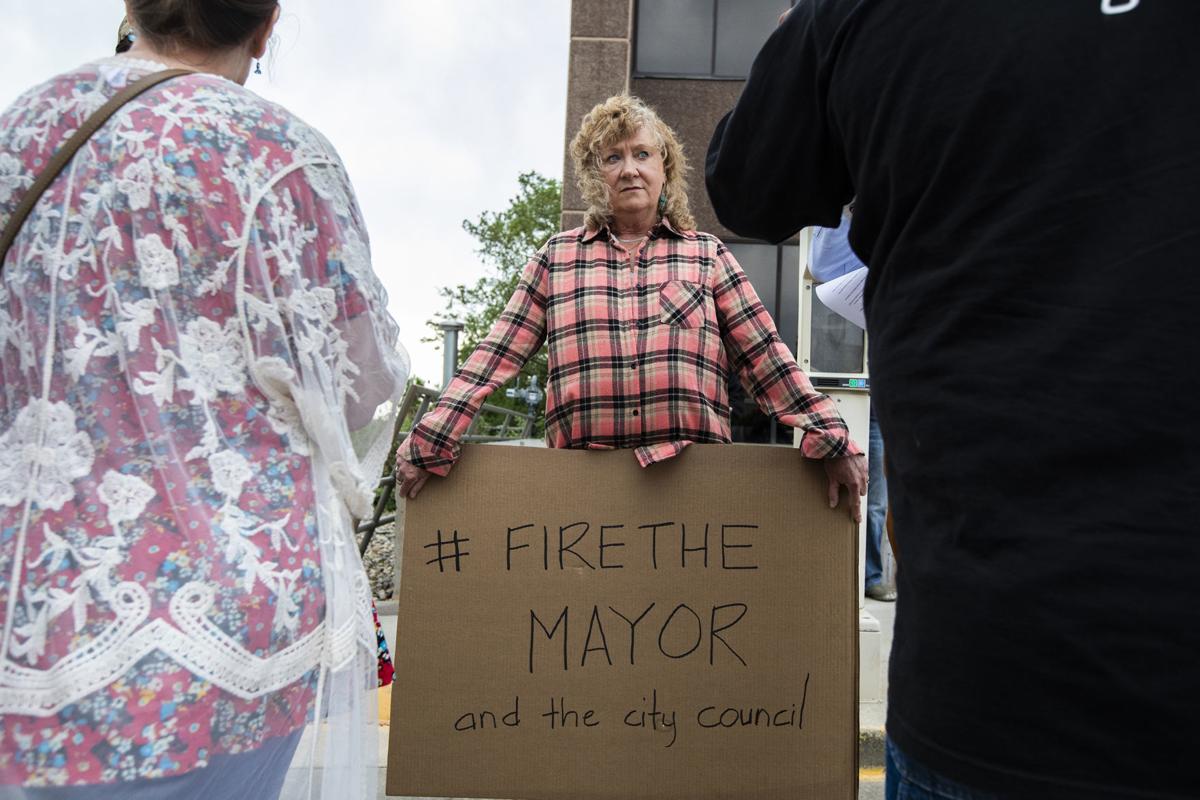 Cathy Raney, center, speaks with fellow protesters in front of Gillette City Hall on Tuesday evening before the regular City Council meeting. Dozens of residents gathered to call out Mayor Louise Carter-King and the council for pushing former councilman Shay Lundvall to resign his seat last week over liking some sexist and offensive Facebook posts. 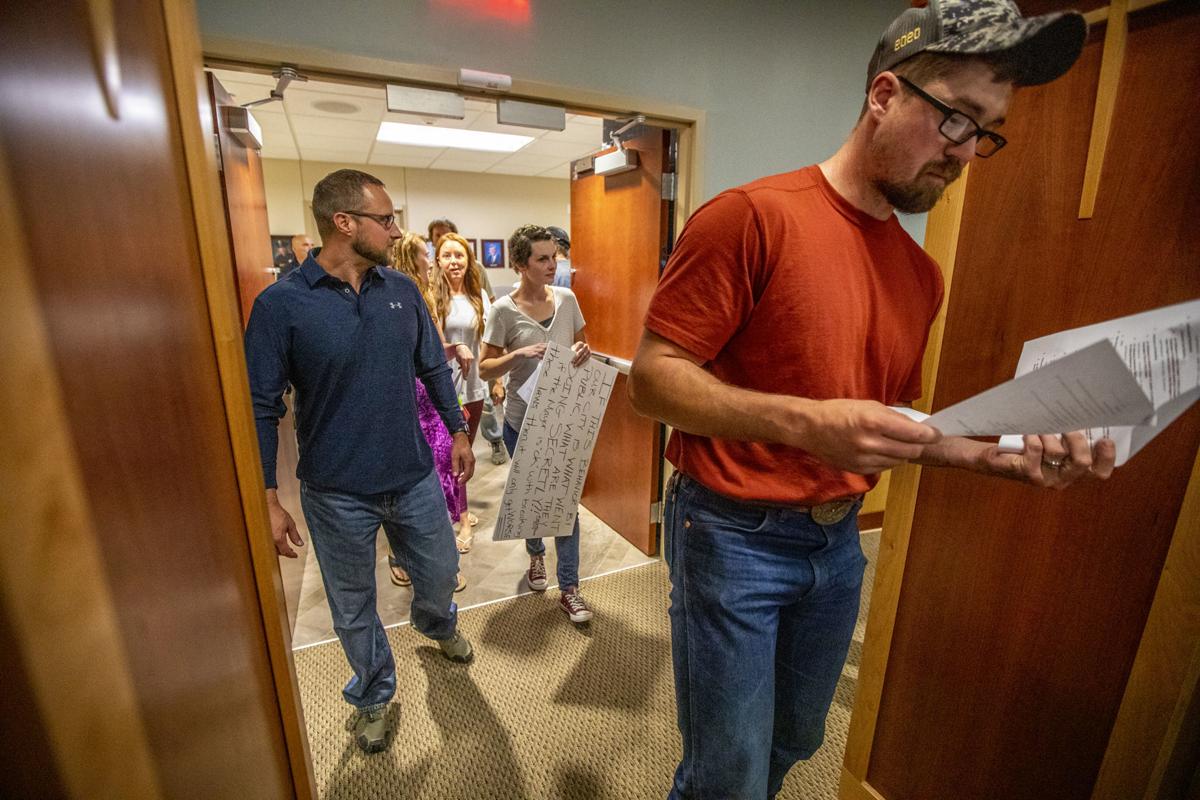 Residents with protest signs and meeting agendas in hand file into the Gillette City Council Chambers on June 16 to voice their opposition of the mayor and council for pushing former councilman Shay Lundvall to resign. All who addressed the council called for either Mayor Louise Carter-King, the rest of the council or all of them to resign.

Cathy Raney, center, speaks with fellow protesters in front of Gillette City Hall on Tuesday evening before the regular City Council meeting. Dozens of residents gathered to call out Mayor Louise Carter-King and the council for pushing former councilman Shay Lundvall to resign his seat last week over liking some sexist and offensive Facebook posts.

Residents with protest signs and meeting agendas in hand file into the Gillette City Council Chambers on June 16 to voice their opposition of the mayor and council for pushing former councilman Shay Lundvall to resign. All who addressed the council called for either Mayor Louise Carter-King, the rest of the council or all of them to resign.

After about 90 minutes of protesting outside Gillette City Hall on Tuesday evening, dozens of city residents packed the City Council chambers to overflowing demanding former councilman Shay Lundvall be installed back on the council and for the mayor and council to step down.

Lundvall resigned his Ward 3 seat on the council last week less than 24 hours at the urging of Mayor Louise Carter-King and the rest of the council. They were reacting to a pair of complaints that Lundvall had “liked” a handful of Facebook posts that espoused sexist and offensive opinions.

Lundvall was told if he didn’t resign, the council would go public with its concern over the councilman’s actions on social media.

Claiming Lundvall was blackmailed by the mayor and council to unfairly resign a position he was elected to, an upswell of supporters have been rallying to his defense, including Tuesday’s peaceful protest, hundreds of comments in local Facebook groups and at least one change.org petition to recall Carter-King.

As of 9 p.m. Tuesday, the #firethemayor Recall Election petition had 437 online signatures of a goal of 500.

All eight people who addressed the mayor and City Council during its regular meeting called for Carter-King to resign and most for the rest of the council follow suit.

“What a bunch of crap,” said Dean Vomhof about the circumstances leading up to and following Lundvall’s resignation.

He told the council members if they couldn’t think for themselves and are only doing the mayor’s personal and political bidding, then they have no business being public servants.

“If you can’t stand up for yourself and you follow her, follow her out the door,” he said.

Chris Smith was the first to speak about what he called “an unrighteous act” in forcing Lundvall off the council and subsequent “shameful attempt” to smear him publicly.

He was referring to a lengthy statement the council released Monday evening detailing its reasons behind asking for Lundvall’s resignation. It also included four screenshots of posts liked by the former councilman that had the offensive content.

All four posts were made by Gillette resident Bob Vomhof, who also addressed the council Tuesday. Since he was first reported as being one of the posters involved late last week, Vomhof said he’s been harassed.

“Who’s responsible for the violence you guys have instigated against me?” he asked. “You think I enjoy hearing about this crap from every person everywhere I go around town? For the first time in my life, I don’t feel safe in Gillette.”

Vomhof also said he briefly considered legal action against the mayor, council and city, but decided against it.

Many of the comments were directed at Carter-King, including from Karla Brandenburg, who claimed she also has been a victim of the city’s alleged strongarm tactics when she was forced to resign as interim director of the Boys & Girls Club of Campbell County.

She said she didn’t fight back, but is glad Lundvall has, referring to a lengthy Facebook post Friday in which the former councilman expressed regret for resigning and apologized for liking the offensive posts. He also said that as a city councilman, he should have held himself to a higher standard than that, but that he intends to run for re-election in the primary.

“I understand Shay’s frustration and humiliation, because Mayor Carter-King makes you feel like the dirtbag of the earth if you don’t follow her rules,” Brandenburg said.

She also said the mayor “thinks it’s perfectly fine to have as many meetings as necessary” behind closed doors to accomplish what she wants outside the public view.

After the public comment period of Tuesday’s meeting, the council finished the rest of the business on its agenda and adjourned without comment.

This is a developing story. Visit the Gillette News Record online Wednesday for more on Tuesday’s protest and council meeting.

The posts that were liked were not even offensive or sexist.

The Mayor needs to step down. Blackmail if far more offensive than liking a post, even if it was what they say it was.

Now it's out there for everyone to see just how crooked the local politicians are I've known this for a long time but apparently either nobody believes me or nobody cares. This is the perfect time for a recall vote get them all out and bring in some new blood not the same old ones playing the same old games making sure that they're all happy and our expense

If you don't wish to be exposed for being a racist, misogynistic, and all around loathsome individual, then don't be one. Pretty simple.

Wouldn't it be great if citizens in Campbell County didn't issue public apologies for being Americans exercising their American rights as American citizens?