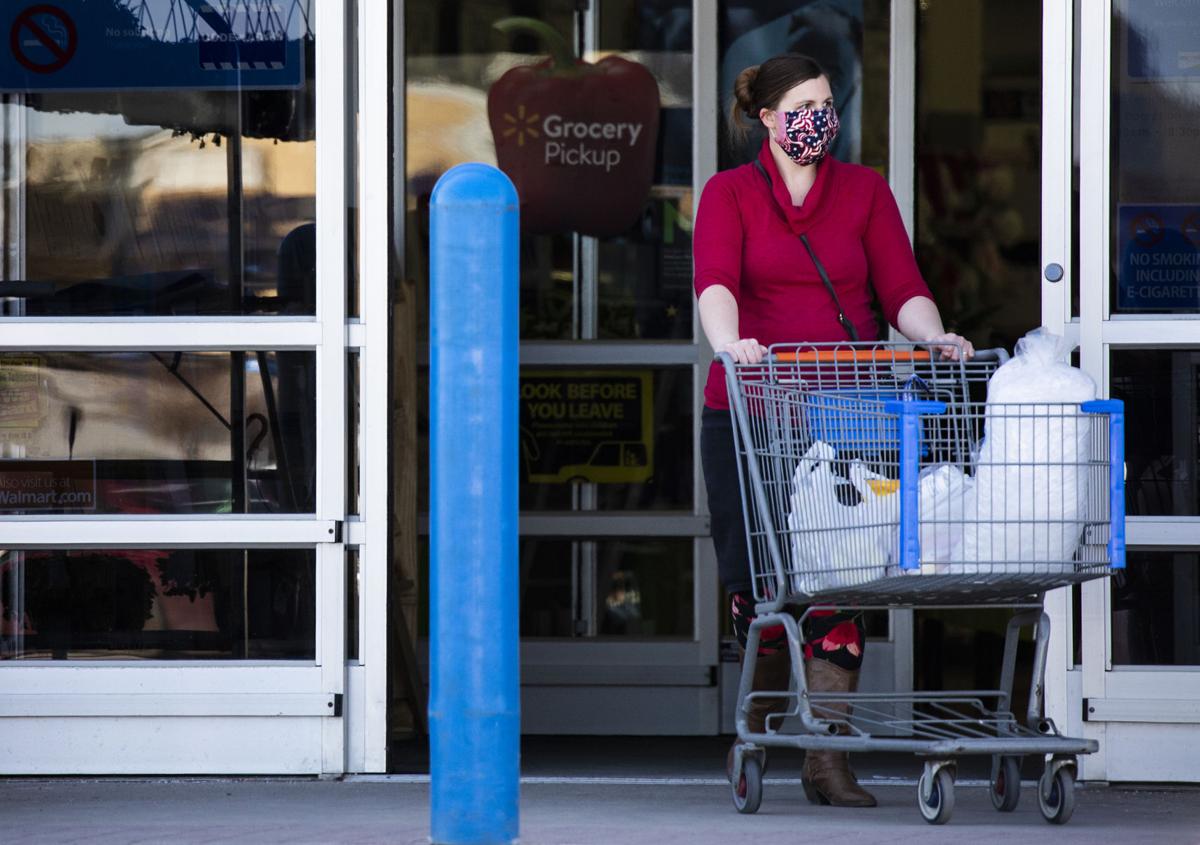 As more national big-box retail and grocery outlets requiring customers wear masks beginning this week, it was reported Tuesday that Campbell County has had its first confirmed novel coronavirus-related death. 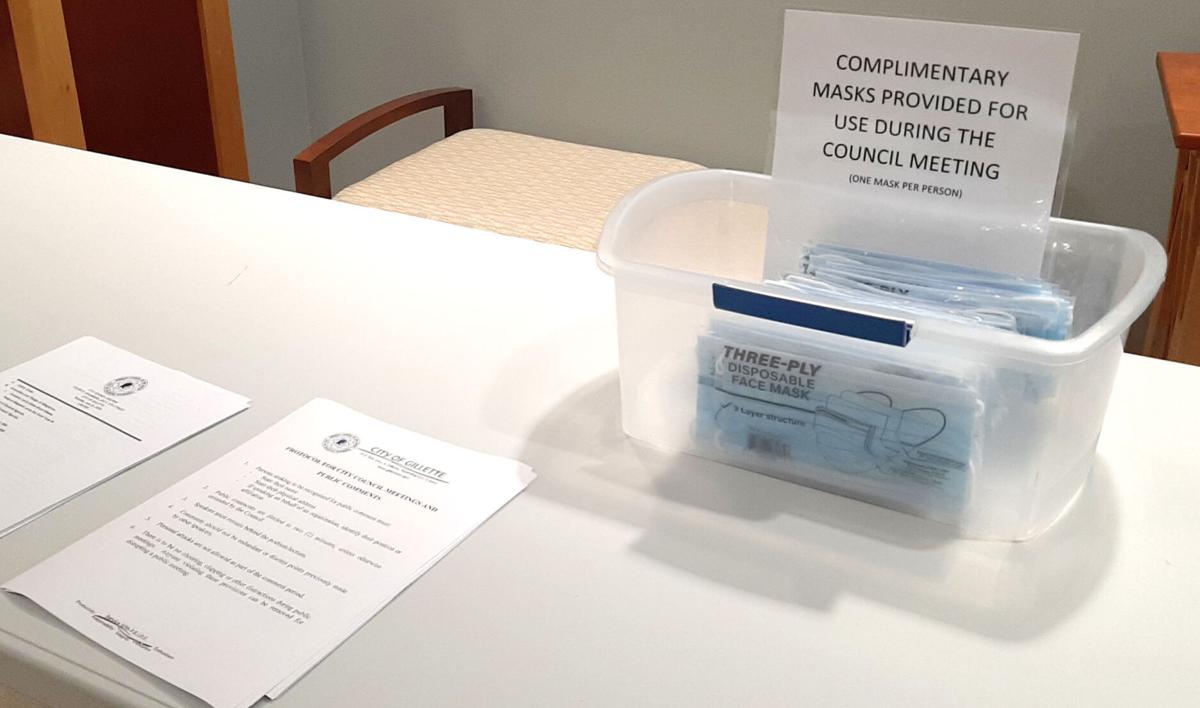 A sign on a container of face masks asks those attending Tuesday's Gillette City Council meeting to wear one while in the Council Chambers at City Hall.

As more national big-box retail and grocery outlets requiring customers wear masks beginning this week, it was reported Tuesday that Campbell County has had its first confirmed novel coronavirus-related death.

A sign on a container of face masks asks those attending Tuesday's Gillette City Council meeting to wear one while in the Council Chambers at City Hall.

A Campbell County woman in her 60s has been confirmed as Wyoming's 25th coronavirus-related death.

Campbell County Public Health Director Jane Glaser said she was notified Friday of a potential COVID-related death in the community.

The state Department of Health announced the death Tuesday afternoon. The department said the woman did not have any of the underlying health conditions known to put patients at a higher risk for coronavirus complications and she had not been hospitalized.

The 78 confirmed cases for Campbell County includes 35 cases this month.

Public Health also is monitoring 36 people who have been identified as contacts of positive cases.

No cases traced back to large community events

No coronavirus cases can be traced back to the three largest events in the community that have happened in the last month or so, officials report.

In early June, Glaser said the next six weeks would reveal a lot about how well the community can prevent the spread. With high school graduations, the state GOP convention and the Fourth of July celebration all lined up to happen — events with hundreds and even thousands of people in attendance — there was the potential for spread.

Tuesday, Glaser said she was “really relieved” when she learned that no cases could be traced back to graduation, the Fourth of July or the Republican convention.

“People took it seriously,” she said about the need for public health precautions.

There was a spike of 13 cases that came in over the Fourth of July weekend. Nearly all of those cases could be traced back to four private social events that happened in mid- to late June, Glaser said. The people who tested positive either attended one of those events or spent time with someone who went to one of those events.

Glaser said she’s “cautiously hopeful” about the next few weeks. She’s got her eye on the Campbell County Fair next week, the Aug. 18 primary election and the start of school Aug. 24. All of these have the potential for an outbreak, but there also are precautions in place to limit the spread of the coronavirus.

She commended the Campbell County School District for the way it handled graduation and for working to get kids back in school this fall.

She said she hopes the community rallies “behind prevention” in the next four weeks.

“It’s not always just about yourself. It’s about your neighbors, friends and everyone in our community,” she said. “We all have a responsibility to prevent the spread and protect one another.”

“Wash your hands, wear a mask whenever possible and watch your distance,” she said. “Those are really the only three things we know make a difference in the spread.”

The city of Gillette announced Tuesday that it's requiring employees to wear masks because of concerns over an increase of local cases, including a customer service employee who recently tested positive for COVID-19.

The announcement also came on the heels of the city learning about the first coronavirus-related death in Campbell County, Acting City Administrator Mike Cole told the City Council at Tuesday’s dinner pre-meeting.

City employees will be required to wear masks inside city buildings if they cannot maintain proper social distancing guidelines, such as being 6 feet apart. Masks also must be worn in the Council Chambers at City Hall.

“I think for the welfare of all of our employees it’s the right thing to do,” Carter-King said.

The customer service division, which was quarantined July 14 because of the employee contracting the coronavirus, is scheduled to re-open to the public Monday, city spokesman Geno Palazzari said.

Campbell County Public Health has received more than $800,000 from the federal CARES Act, and most of it is to be spent on coronavirus testing.

The Wyoming Department of Health distributed the federal money to the state's 23 counties based on population. Campbell County’s grant, totaling $803,328, is to be spent on three things.

Glaser said she’s waiting for recommendations from the state on which tests to buy. When the state makes its recommendations, Public Health can begin testing soon after. The grant also will cover the costs of transporting tests to a lab.

If masks are so important, why don't we use that grant money to provide masks to all residents instead of spending it on testing? I believe I nearly died from the flu in December 2019, and I didn't need testing to tell me to stay home and self-isolate.

And you had symptoms of the flu right? Many people have this virus and do not feel sick or show any symptoms those are the people the testing finds so they can know that they can be a spreader and take precautions like WEARING A MASK!

Ka12, thank you for recognizing the life and death situation of wearing a mask. How do we get our City and County with all of their free money to build cross-walks, buy colleges, etc., to provide those life-saving masks? At this rate, with no masks, those cross-walks and that college won't have any citizens left to utilize them, right?

Are you kidding me? They are spending $763,000.00 on testing people who are not sick and have no symptoms?