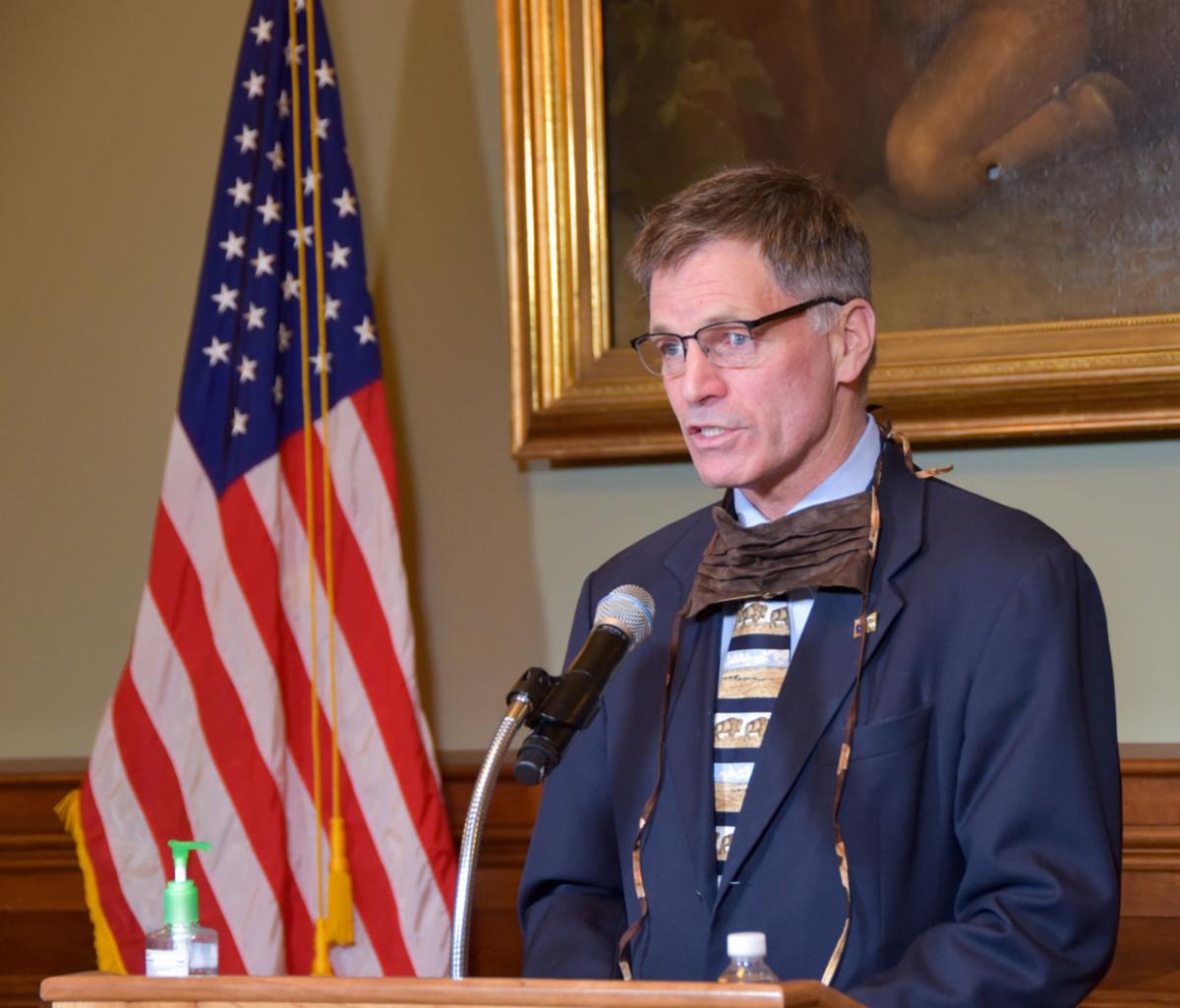 Gov. Mark Gordon speaks during a news conference held Wednesday at the Wyoming State Capitol in Cheyenne about the state’s COVID-19 pandemic response. 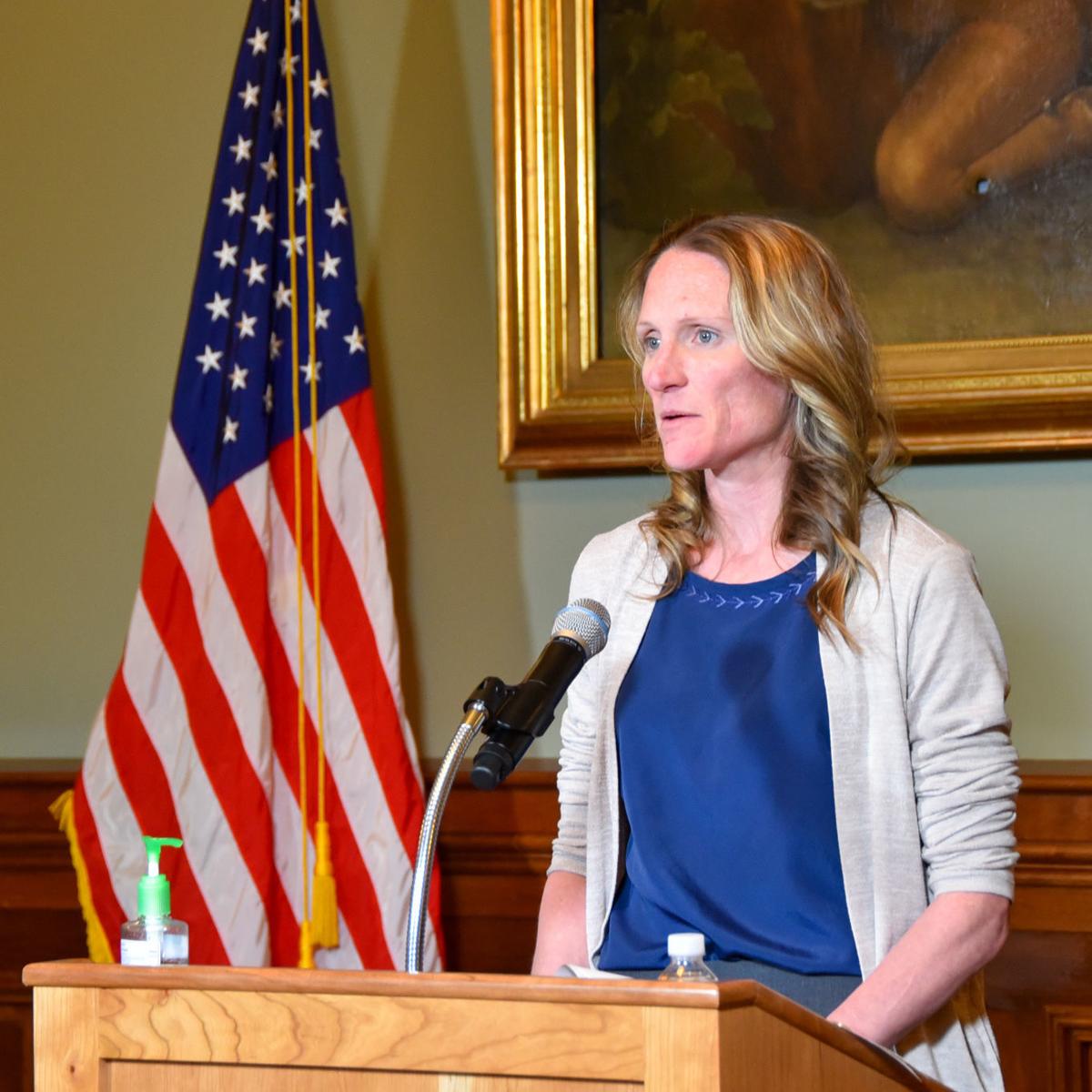 As Wyoming begins to contemplate life after the COVID-19 pandemic, Gov. Mark Gordon is asking people to remain patient and vigilant because the state’s coronavirus outbreak is expected to get worse before it wanes.

“We do see the number of cases rise,” he said during a Wednesday afternoon press briefing on the virus response. “Wyoming saw COVID-19 arrive late (compared to other states)… and the work we have done so far is making a difference.”

Because Wyoming was late in seeing cases of the virus manifest, its surge of COVID-19 is still expected to be a couple of weeks away.

“We are not in sync with our neighboring state, but it means our actions will not be the same, either,” Gordon said, adding he’ll “do what’s best for Wyoming residents.”

What’s best for now is to hold the line on his previous orders closing public places and nonessential businesses, limiting gatherings of more than 10 people and closing schools through April 30. Gordon said he’s not ready yet to extend those beyond that date, but that the state continues to gather data on whether to extend those orders.

He said the state is in a “transitioning” and “stabilization mode” and is examining whether those orders need to be modified, loosened or “made more practical in certain areas.”

“The first was a friend,” he said about a Johnson County man who was hospitalized for a day before he died.

“Sadly, today we learned of the second COVID-19-related death right here in Wyoming, somebody right about my age,” Gordon added about the second announced death Wednesday.

While it’s too early to know if Wyoming is near its virus peak, the governor said the state is preparing for what comes next. That includes a realization that life won’t just pick up where people left off less than two months ago.

“Anybody can look at the national economy and understand that there are factors outside Wyoming that will impact us,” he said. In Wyoming, “our economy is not the same as it was in February.

“It’s a changed economy and we will be living with the consequences of this virus for (some time) to come.”

Despite pressure to ease up, Gordon said the consequences of doing that too soon can be dangerous.

“If we ease up, if we think this will turn off like a switch ... think again,” he said. “We may not be ready to relax any restrictions (and) this will be a slow recovery.”

He also said the measures residents have been taking are working and that, “I believe in the people of Wyoming, I believe in common sense.”

As well as social responses to the pandemic, Gordon said thousands of Wyoming’s small businesses and nonprofit organizations have already received money from federal relief efforts.

Through Monday, more than 5,700 loans totaling more than $700 million have been approved for state entities, what Gordon called “astounding numbers.”

“These dollars will be used in turn by these businesses and nonprofits to keep their employees working through this crisis,” he said.

He also said the state has received numerous inquiries about implementing a moratorium on evicting or foreclosing on people who can’t make their rent or mortgage payments because they’ve lost their jobs during the COVID-19 shutdown.

Gordon said he’s monitoring the situation and that it’s not just about relief for rent-payers, but also finding a way to be fair for landlords.

“This challenge is really across our entire economy,” the governor said. “Our remedy here is really designed at shoring up the entire system.”

Whether the state emerges from its virus shutdown sooner or later, whenever it happens, people should expect that it will be to a far different reality than before, Gordon said.

Gov. Mark Gordon is directing all state agencies to cut their spending through the end of the fiscal year and identify more cuts and savings in their budgets moving forward the next two years.

“While we all battle the impacts of the spread of COVID-19, we also need to prepare in the best way possible for inevitable financial impacts on the State,” Gordon says in a Wednesday afternoon statement announcing the directive. “It is imperative that spending slow while we continue to learn more about the full extent of this historic pandemic and economic decline.”

The governor has ordered agencies to immediately freeze hiring and suspend any general fund contracts greater than $100,000. He also has called for “a rigorous review of major maintenance spending,” according to the statement.

He also said agencies must re-examine their budgets for the next 2021-22 biennium. They’ll need to find their own cuts and reductions, the statement says, adding that “the state cannot adjust spending through across-the-board reductions.”

Gordon also said that while Wyoming will receive a significant payout from the CARES Act recently passed by Congress in response to the COVID-19 pandemic, that money is earmarked only for virus-related things and can’t be used “to backfill revenue declines.”

The governor is hosting a press briefing at 4 p.m. where it’s expected he’ll expand on his budget announcement and discuss other issues related to Wyoming’s response to the novel coronavirus response. This story will be updated after the briefing.