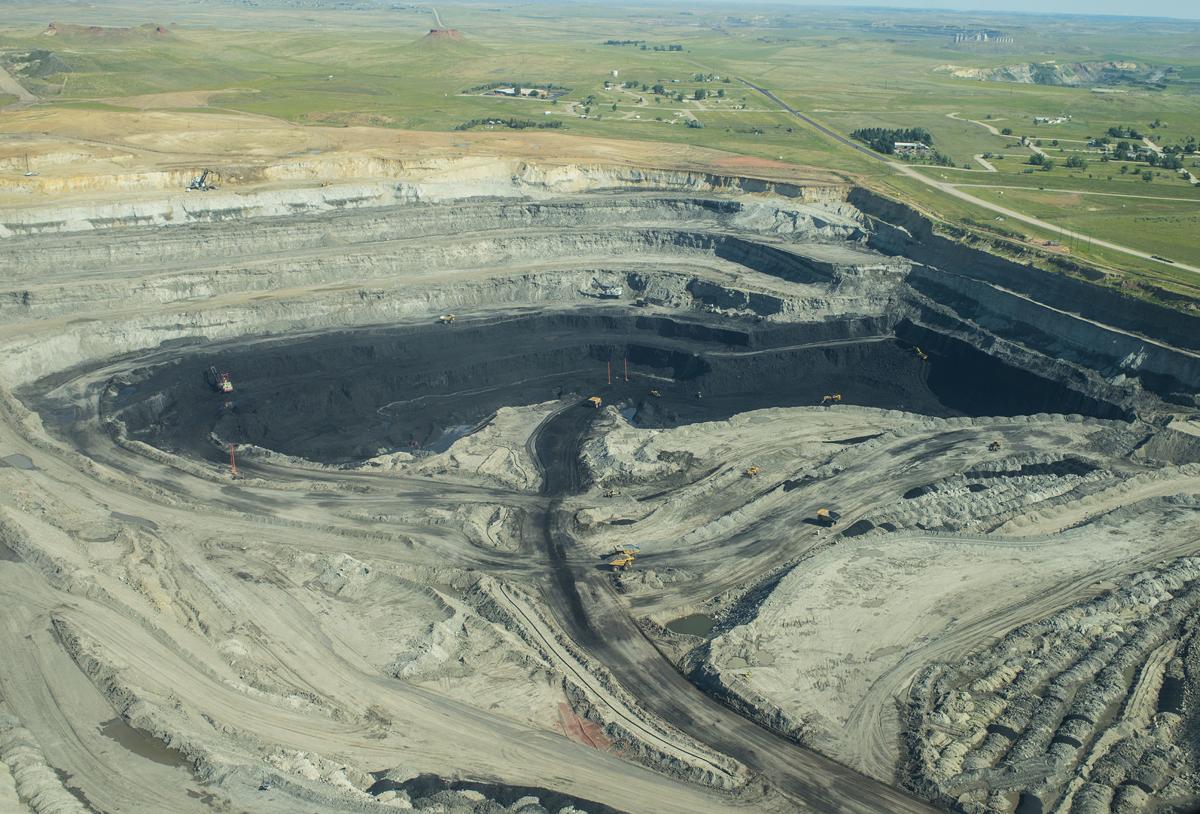 Heavy equipment is seen working all around a large open pit at the Eagle Butte coal mine just north of Gillette. 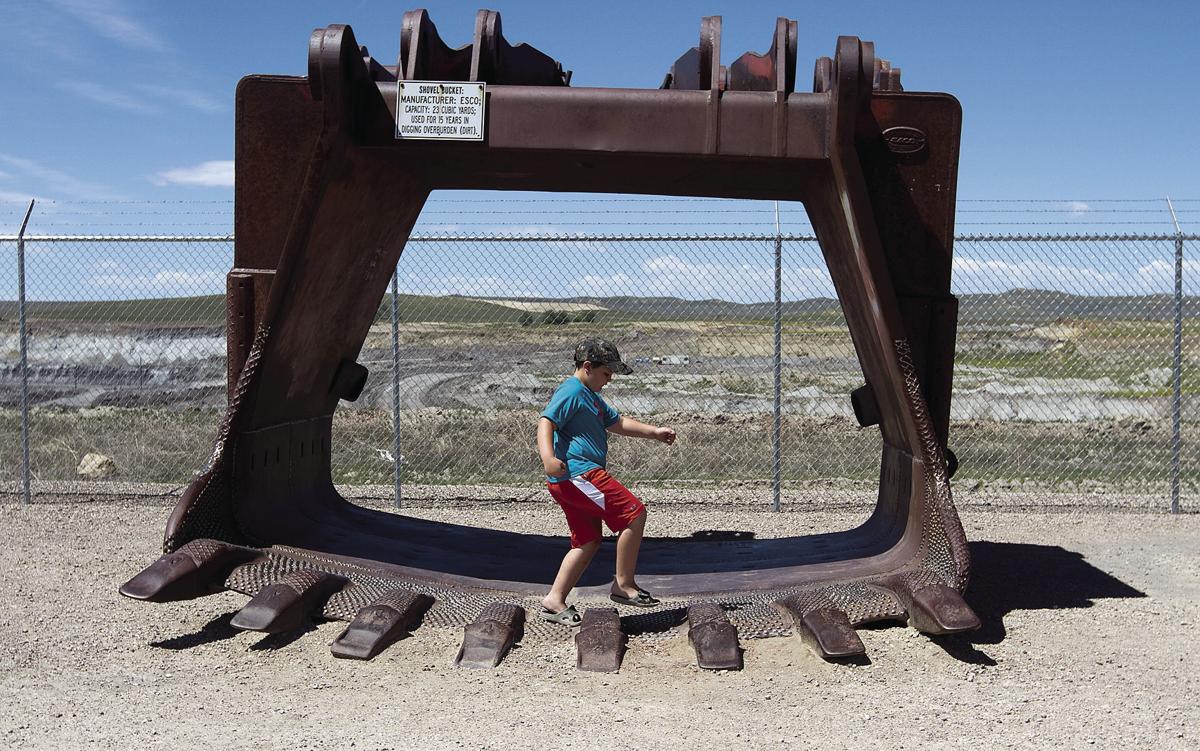 Jesse Casady, from Macon, Missouri, hops across a shovel bucket at the Eagle Butte mine overlook during a tour run by the Gillette Visitor's Center. 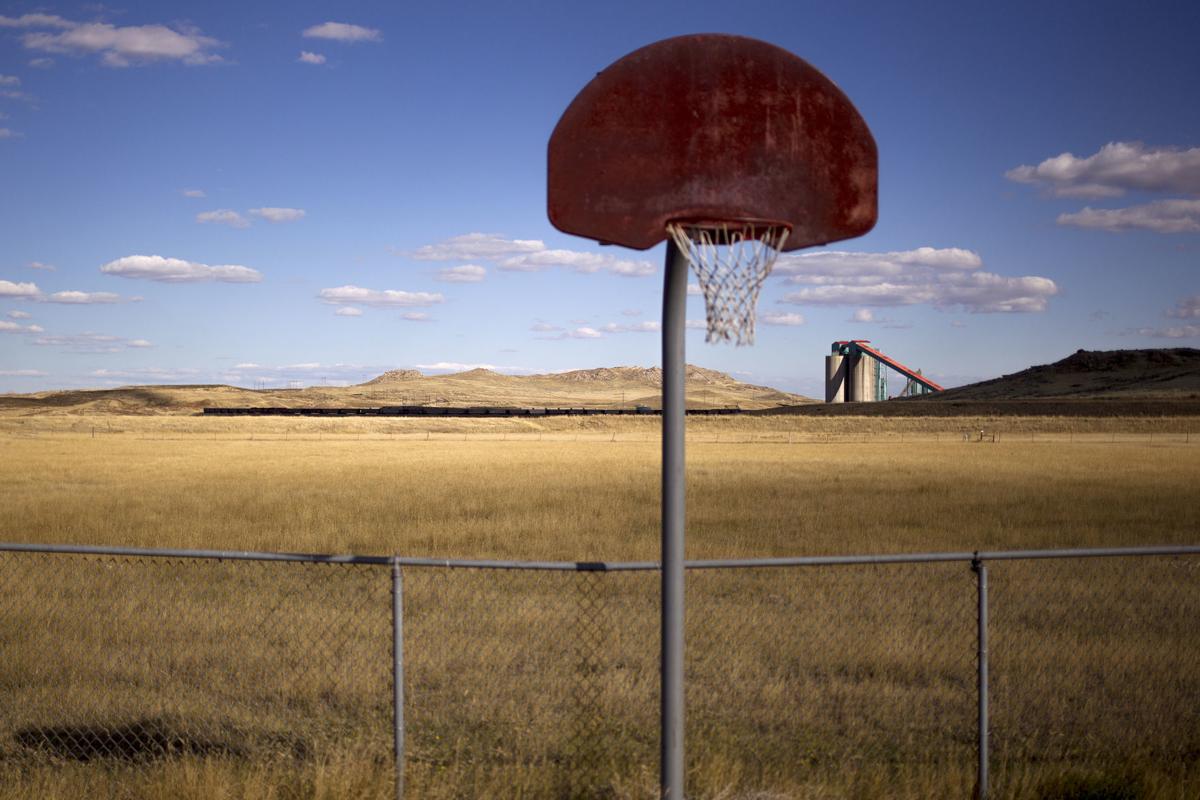 The silos at Eagle Butte mine are visible behind Rawhide Park in the former Rawhide Village subdivision, which was evacuated in 1987 when poisonous and flammable gasses began seeping into homes from an underground coal seam. 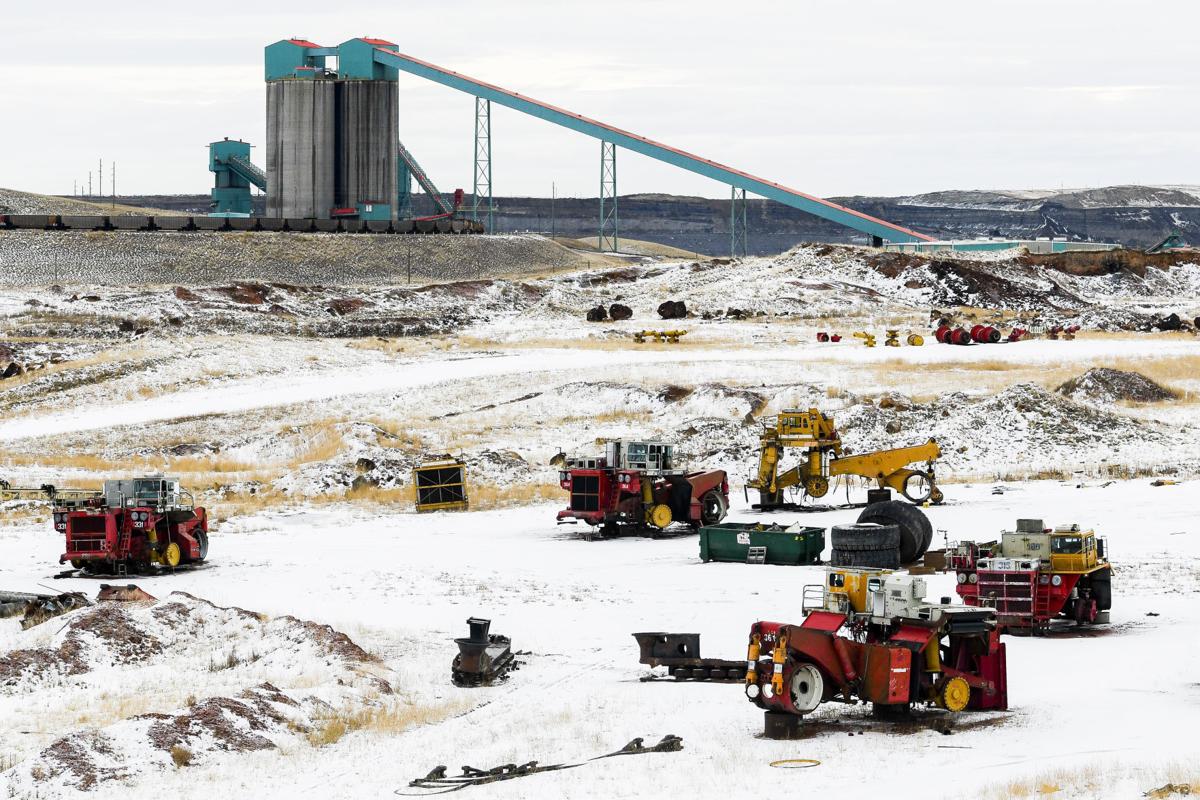 A view toward the Eagle Butte coal mine. 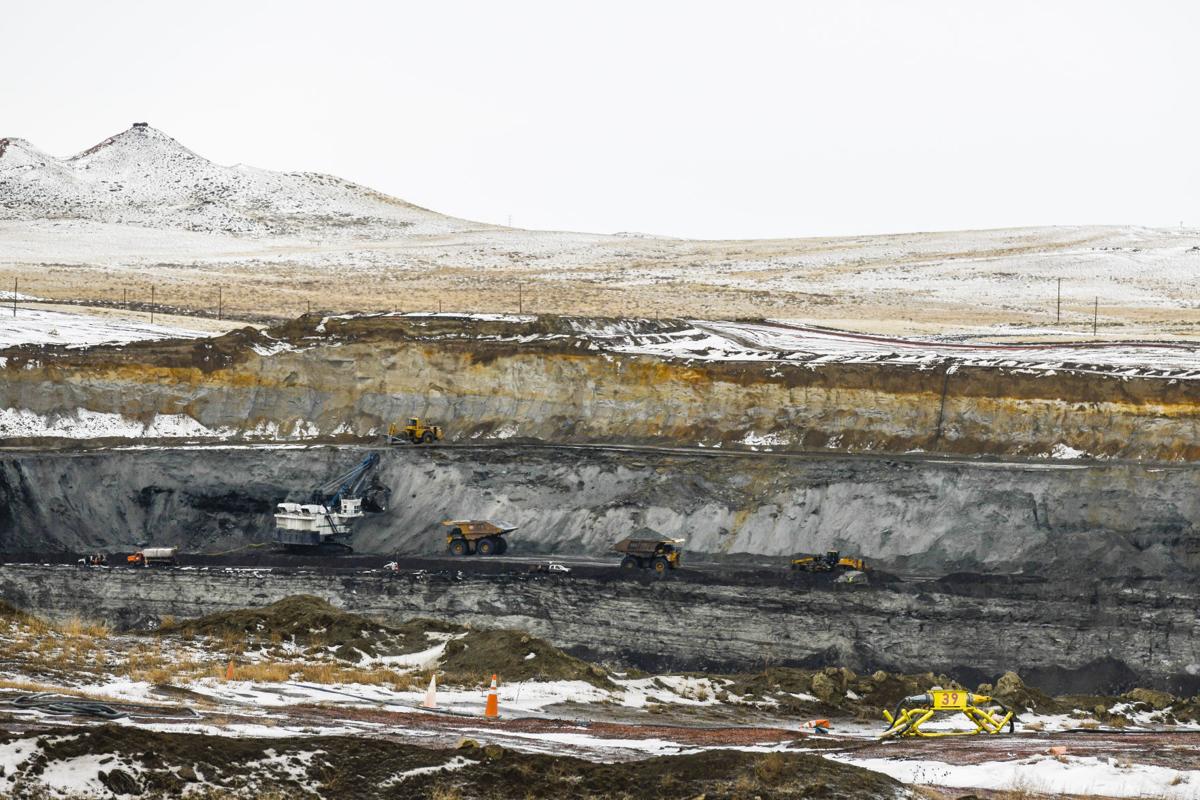 Trucks move coal at the Eagle Butte mine north of Gillette.

Heavy equipment is seen working all around a large open pit at the Eagle Butte coal mine just north of Gillette.

Jesse Casady, from Macon, Missouri, hops across a shovel bucket at the Eagle Butte mine overlook during a tour run by the Gillette Visitor's Center.

The silos at Eagle Butte mine are visible behind Rawhide Park in the former Rawhide Village subdivision, which was evacuated in 1987 when poisonous and flammable gasses began seeping into homes from an underground coal seam.

A view toward the Eagle Butte coal mine.

Trucks move coal at the Eagle Butte mine north of Gillette.

Another large Powder River Basin coal producer has filed for Chapter 11 bankruptcy reorganization in an attempt to clear millions of debt it can’t pay.

Blackjewel LLC, which operates the Eagle Butte and Belle Ayre mines in Campbell County and 30 other properties around the country, filed Monday in the U.S. Bankruptcy Court for the Southern District of West Virginia.

Blackjewel employees in Wyoming were told of the bankruptcy during a Monday morning meeting, said one employee who asked not to be identified.

“This morning we were told, as of today we’re going to file Chapter 11 bankruptcy,” the employee said. “Four big bosses walked into the meeting this morning and told us.”

The mine worker said employees asked questions about the move, but “we couldn’t get a whole lot of answers.”

He said the reorganization was described to them as “it’s going to be a financial restructure and will be a good thing for the company.”

The announcement also came after workers weren’t paid as usual Friday and instead were paid with cashier’s checks Sunday, information that was confirmed with other Blackjewel employees.

They’ve also been told operations will continue as usual during the bankruptcy process, the employee said. But several workers also have confirmed many of the local contractors that were owed money have pulled their equipment out of the mines.

The employee said that’s something that is bothersome, that other local companies and people will be left hanging without getting paid.

“It’s frustrating and it’s hard,” the worker said. “We’re barely getting by with what we do have (at the mine sites). We can’t get parts because we owe all of our vendors so much money. it’s going to be a rough go, I think, and these guys are making it out like it’s all roses.

“This isn’t right. It’s going to screw so many contractors, so many vendors and they don’t even know it yet.”

Unlike the ongoing bankruptcy process that Gillette-based Cloud Peak Energy is in or other bankruptcies for other Powder River Basin coal operators, Blackjewel’s situation is different because it’s not a public company and it doesn’t own the Eagle Butte and Belle Ayr mines.

Technically, they’re still owned by Contura Energy West, an offshoot of Alpha Natural Resources that formed during its Chapter 11 process.

Contura still owns the state mining permit because efforts to transfer the permit to Blackjewel were held up when the Powder River Basin Resource Council, a Sheridan-based environmental watchdog group, challenged the transfer, claiming the company and its president and CEO, Jeff Hoops, have a poor track record.

When she learned of Monday’s bankruptcy, resource council attorney Shannon Anderson said she’s disappointed by the move, but not surprised.

“What is the future of these mining operations?” she asked. “This was supposed to be the company to take over and responsibly operate, but that’s not who this company is.”

She also said that she “can’t imagine they have money to pay off their debts” and that bankruptcy “could just mean a bunch of people get shafted, including the county.”

What about the tax bill?

Blackjewel’s bankruptcy filing came three days after the company missed a $1 million payment to Campbell County under an agreement it had to pay off millions of dollars in unpaid ad valorem taxes dating back to 2017.

Owing about $17 million, the company already paid $5 million in weekly $500,000 installments through May. The schedule called for Blackjewel to pay $1 million by Friday, another $2 million a month July through March 31, 2020, then a balloon payment in April 2020 of about $13 million.

The schedule was set up to bring the company current on its 2017 and 2018 county production taxes. There’s about $32 million left on that agreement.

County Treasurer Rachael Knust said she had been informed of the bankruptcy filing and that the county is looking over its legal options.

What about the workers?

The Eagle Butte and Belle Ayr mines operated by Blackjewel are two of the more active mines in the PRB, producing a combined 35.5 million tons of thermal coal in 2018, according to the U.S. Mine Safety and Health Administration. They also employ nearly 600 workers.

Those workers are being told the company will operate as usual through the bankruptcy process, said the Blackjewel employee.

For now, they’ll continue mining coal and hope they’ll keep getting their paychecks.

This is a developing story and will be updated.

Wyoming Blackjewel LLC employees still having problems with their final regular paychecks may have those worked out by Friday.

Hundreds of workers left scrambling after Blackjewel locks out mines

[angry]Mines were CLOSED this afternoon and employees were required to leave. So much for operating as normal through the bankruptcy proceedings.