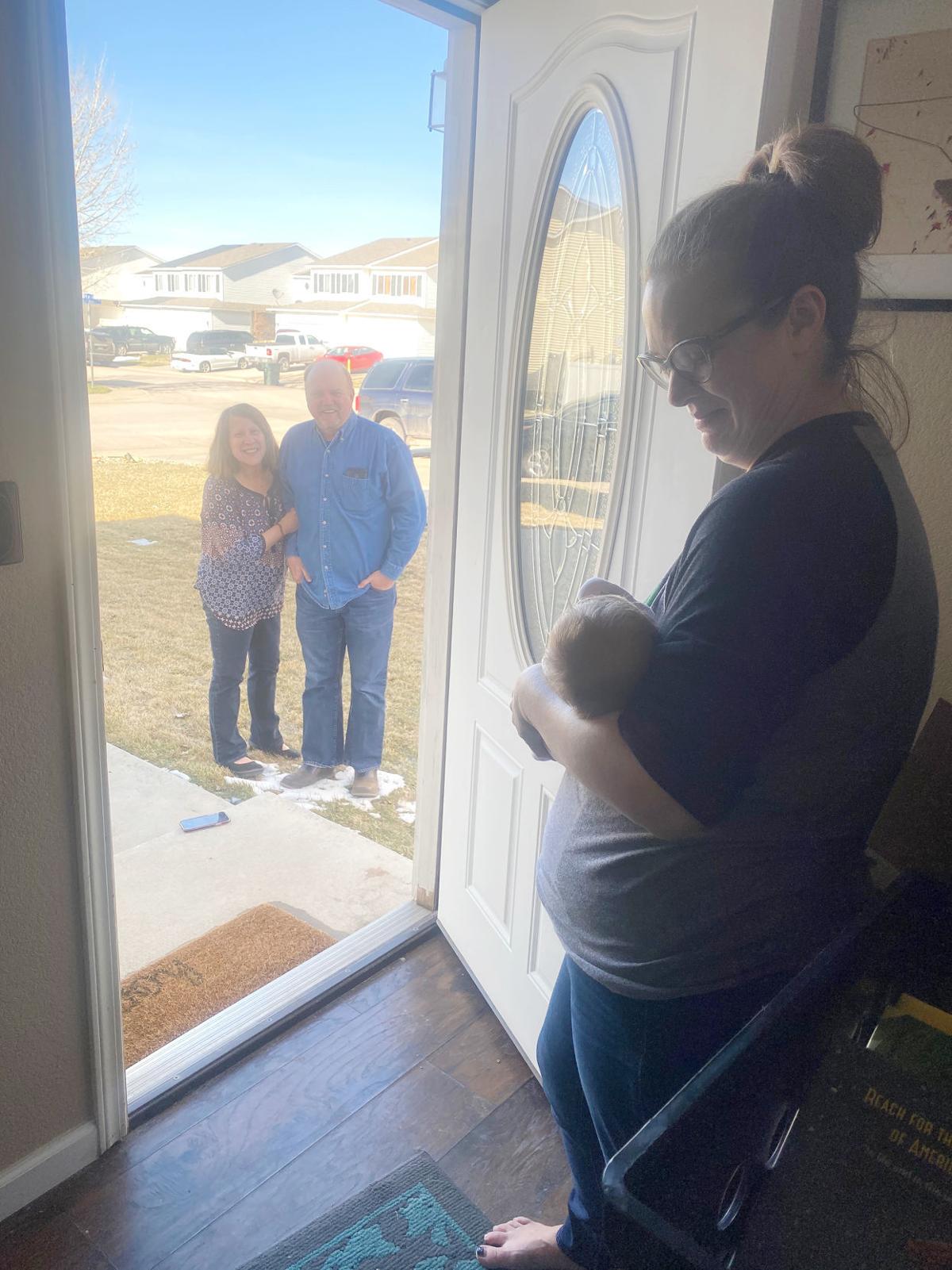 Miranda Miller shows off her newborn to her parents, Matt and Lorraine, through the doorway of her home in Gillette. Her son was born at the beginning of the COVID-19 pandemic. 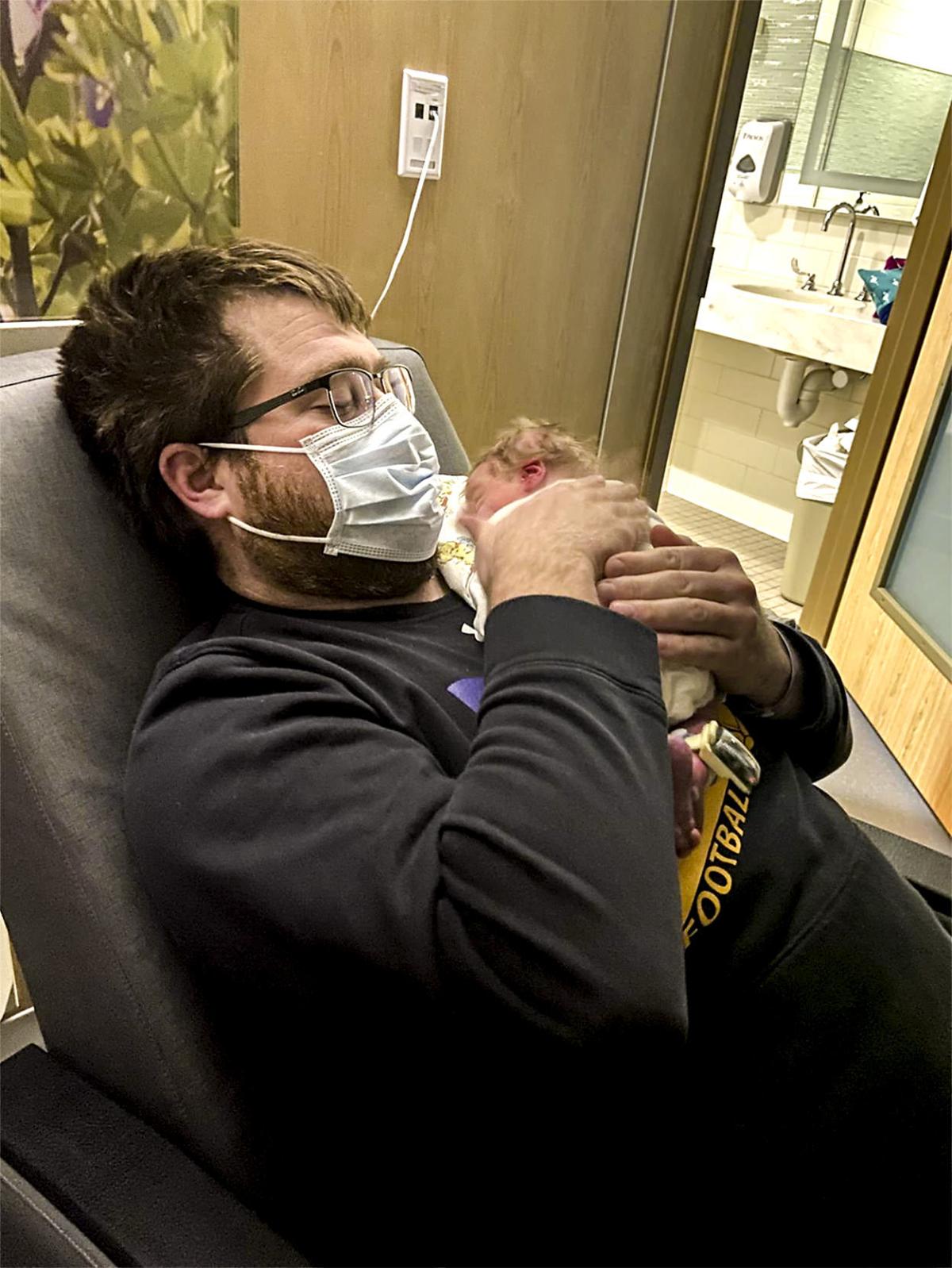 Eric Finn, above, holds his son Ronin, who was born April 3 during the COVID-19 pandemic at Campbell County Memorial Hospital in Gillette. Below, he and fiancée Miranda Miller with their new child. 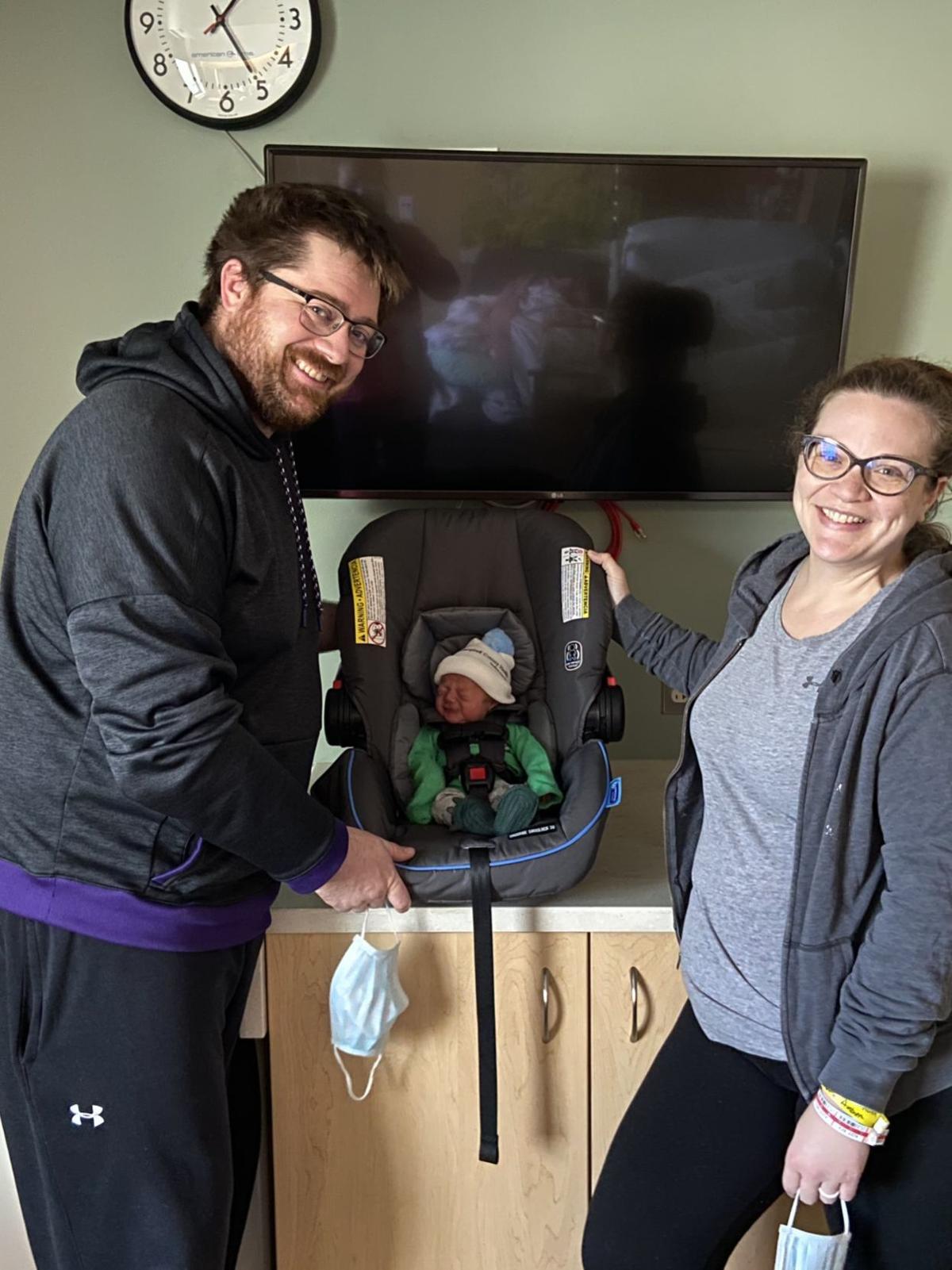 Eric Finn, left, and his fiance’, Miranda Miller, right, with their newborn, Ronin, who was born April 3 during the COVID-19 pandemic.

Miranda Miller shows off her newborn to her parents, Matt and Lorraine, through the doorway of her home in Gillette. Her son was born at the beginning of the COVID-19 pandemic.

Eric Finn, above, holds his son Ronin, who was born April 3 during the COVID-19 pandemic at Campbell County Memorial Hospital in Gillette. Below, he and fiancée Miranda Miller with their new child.

Eric Finn, left, and his fiance’, Miranda Miller, right, with their newborn, Ronin, who was born April 3 during the COVID-19 pandemic.

Even in the best of times, becoming a new mother can be isolating. It’s a period of recovery from the marathon of birth and the long, sleepless nights that come with pregnancy.

There is a steep learning curve to parenthood under normal circumstances.

But these days aren’t normal.

When Miranda Miller and fiancé Eric Finn found out she was pregnant in July, to say they were excited would be an understatement.

She had plans and ideas in her head of how everything would go. The baby’s room. The birth. Seeing her parents and her fiancé’s parents’ faces when they saw their first grandchild.

What she didn’t expect was a pandemic to sweep across the world and change all of that.

Miller is an avid consumer of news. She saw the early stories of the coronavirus in December. They watched it spread across Asia and Europe.

“In February, we figured it was only a matter of time before travelers brought it here,” she said.

Then it did. Orders closing public places and urging people to stay home were placed in mid-March.

Until that point her pregnancy, her first, things had gone pretty well, Miller said. Then anxiety began to set in.

Her final doctor’s appointments were limited to her and her partner. The office wasn’t as busy since only obstetrics patients were being seen. Doctors warned her that soon patients would need to wear masks.

There were so many questions — Can a mother pass it to her baby in utero? Would her fiancé be able to join her at the hospital for birth? — and few answers.

“There are a lot of women in this country having to give birth alone,” she said.

In cities around the country, women are not allowed to have their partners in the room with them to protect mother and baby. Some dads have watched their children being born via FaceTime or Skype.

“The thought of giving birth by myself is horrifying,” she said.

Miller was due April 21 but because of her age, she was prepared to be induced a week earlier.

In the early morning of April 2, her water broke.

“We were relieved because data predicted the peak (of the virus in the U.S.) to be the second week of April,” she said.

She arrived with Finn at 5:30 a.m. to Campbell County Health. After 24 hours of pitocin, she hadn’t progressed as much as the doctors would have liked, so they performed a cesarean section.

“That was the first glimpse we had at hyper-focused safety,” she said. “They dressed my husband in what looked like a hazmat suit. He was in a full gown and a safety mask.”

But things were hardly normal.

Once the new family of three got settled in their room at Campbell County Memorial Hospital, Miller and Finn were asked to wear face masks.

“We didn’t want to risk the health of our 2-day-old baby or the health care workers,” Miller said.

She didn’t mind wearing the mask, but it did make breastfeeding hard for her. She wears glasses. There is a huge learning curve to breastfeeding anyway and the mask was one more obstacle in an already challenging situation.

No visitors were allowed to see her — not her parents, friends or coworkers. For the three days they were there, the family wasn’t allowed to have food delivered.

When Miller told her mother, Lorraine, she was pregnant she said her mother cried tears of joy.

“I thought about being at the hospital with her and seeing the baby there,” Lorraine said.

The hardest part of all of it has been not letting her parents visit their grandchild.

“It’s devastating,” Miller said. “FaceTime or Skype is not the same. It’s not the same as seeing your parents hold their grandchild. You can’t see their excitement.”

Miller’s parents take meals over to the new parents but they have to see the baby from closer than 6 feet away. Usually, they stand at the driveway and Miranda holds the baby up to the door.

“I’ve waited so long for this precious child and I can’t hold him for two months,” Lorraine said.

While they get to know each other, and between conducting online classes through Gillette College where she works, Miranda is filling out his baby book.

“We’ll have the current events section completely filled up with pandemic stuff,” she said. “I want him to know why he had no visitors.”

His paternal grandmother wrote the baby a letter from Ohio explaining why she wasn’t there snuggling him as planned.

Some day, Miranda will explain all of this to her son.

“Hopefully, we’ll be in a doctor’s office getting a vaccination (for COVID-19) and that’s the context,” she said.

But that sweet baby boy is giving a lot of people something to look forward to.

“The first thing I’ll do is have grandparents over and take those pictures,” Miranda said. “The next is to give the all-clear to my fiancé’s mom to come out and to my sister in Omaha.”

Lorraine is counting down the days.

“It’s giving me something to look forward to,” she said. “He is already well loved.”