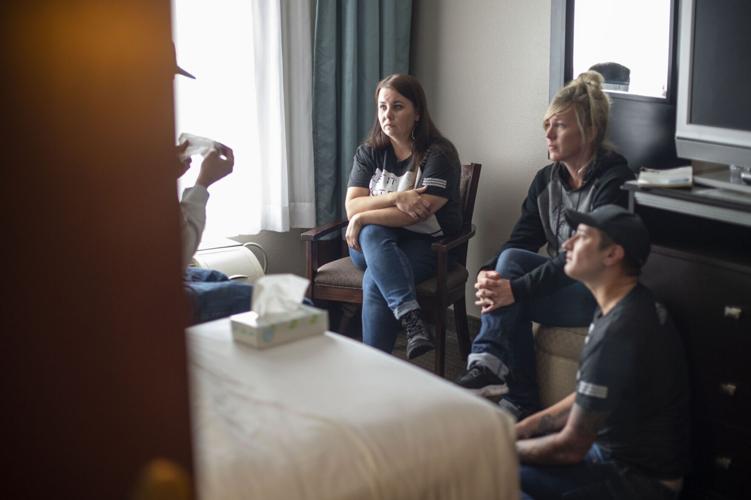 A man wipes away his tears as he talks to Uprising Wyoming members Terri Markham, from left, Julie Johnson and Charlie Falkis at a hotel Friday in Gillette. The man was one of several ticketed for soliciting prostitution during a real-time training exercise with multiple law enforcement agencies and the nonprofit advocacy group Uprising Wyoming. 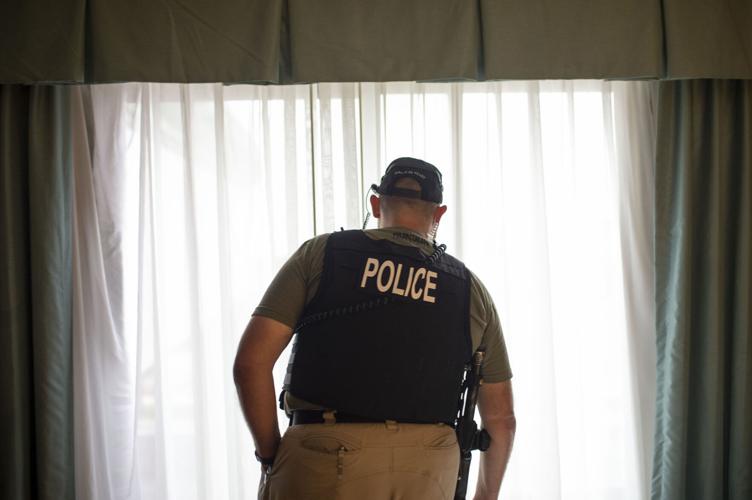 Gillette police officer Zach Parker watches the parking lot from a window in a Gillette hotel room Friday during a prostitution sting and training operation led by the nonprofit organization Uprising Wyoming, which works to raise awareness around human trafficking and exploitation. Several men were ticketed for soliciting prostitution and released after being interviewed by members of the organization. 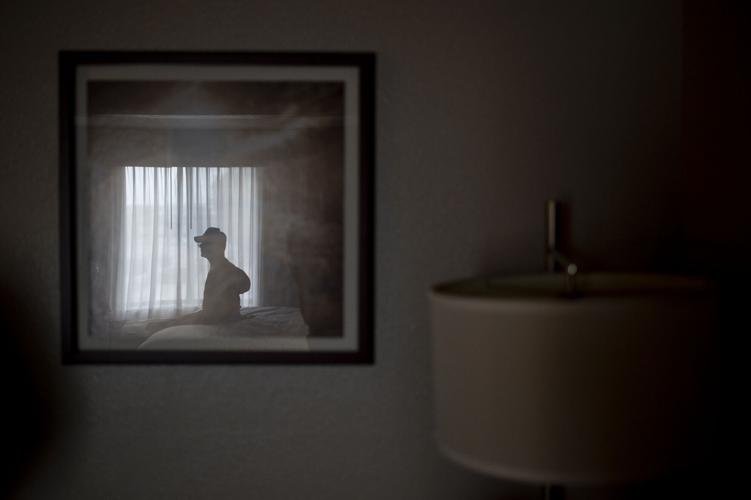 A man ticketed during an anti-sex trafficking training listens to advocates from Wyoming Uprising inside a hotel room in Gillette. Law enforcement from Gillette and Johnson County participated in the live training that saw multiple men ticketed and released for soliciting prostitution. 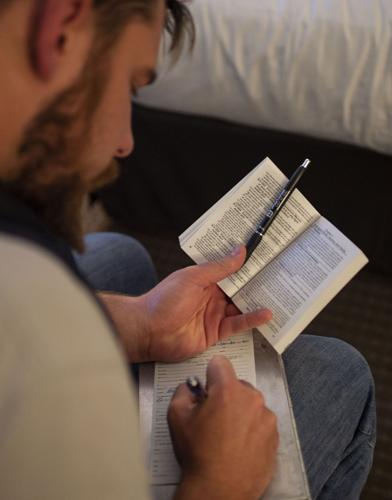 Officer Tanner Clemens writes a ticket for a man caught soliciting prostitution during a sting operation and training exercise Friday at a Gillette hotel. Law enforcement from Gillette and Johnson County participated in the training with the nonprofit advocacy group Uprising Wyoming, that works to bring awareness regarding human trafficking and exploitation in Wyoming. 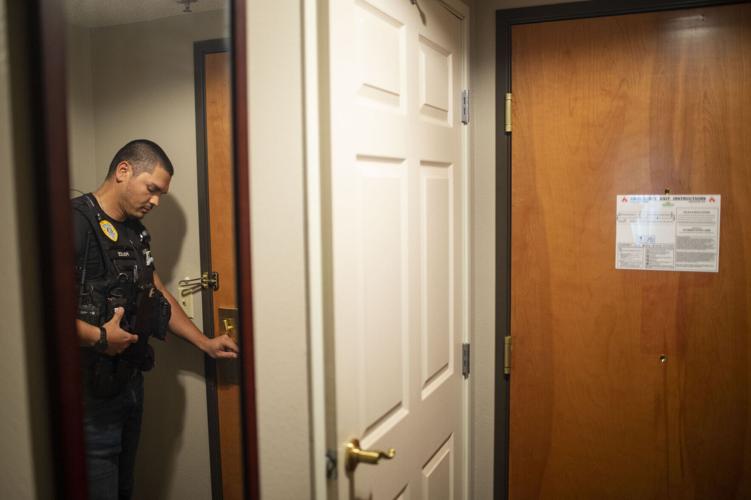 A Gillette Police officer listens for a knock at a hotel room door during a sex trafficking sting and training operation in Gillette. 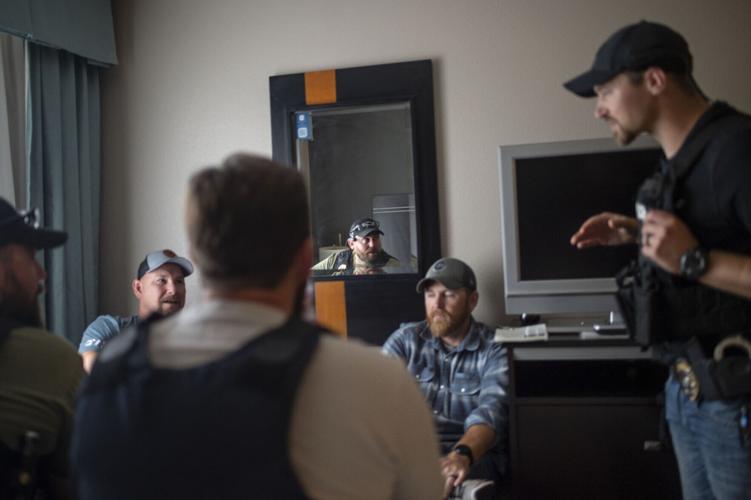 A shrewd whistle cut through the air.

“There’s a white pickup pulling up,” said Natalie Perkins, from her post looking out of the hotel room’s window.

The room full of people went still. The air conditioner hummed and traffic was heard from the road outside the Gillette hotel.

Then a few moments later she signaled again: “He just made a full circle.”

The 15 or so people spaced between the neighboring hotel rooms, conjoined by the open partition door on the wall separating them, fell quiet. A few Gillette police officers shuffled into position, including two in the waiting room, as the other officers stationed themselves in the operation room and spoke in hushed tones.

The rest happened in a blink, starting with a knock at the door.

The two officers in the other room shot into the hallway. Handcuffs clicked and clasped and the officers resurfaced in the neighboring operation room, escorting the man they had just detained.

The onlookers from the waiting room — a group of human trafficking victims advocates, and Uprising Wyoming employees, including trafficking survivors — peered into the other room through the partition as the man was patted down.

The 38-year-old Gillette man, still in handcuffs, was then seated on the edge of the bed, facing a mirror and two trafficking advocates, Terri Markham, the nonprofit executive director, and Julie Johnson, a survivor of trafficking herself.

“I could have been in this room,” Johnson told him. “I was in this room at a different point in my life, against my will. I was being sold to buyers.”

They talked to the Gillette man about the prevalence of sex trafficking and the lesser known implications of it. The majority of people who are bought for sex are forced and coerced into it. By the organization’s metrics, 85-90% of those selling sex do so against their will.

Then she asked whether he knew, or ever thought about, whether the people advertising sex did so by choice.

“No, not really. I mean, I haven’t thought about that part, I guess,” he said. “You don’t figure that would happen around here, I guess.”

On Friday, as part of a joint training with Uprising Wyoming and the Gillette Police Department, officers caught four men in a sting operation. Each man responded to an online post to buy sex and unknowingly communicated with law enforcement and arranged to pay for sex in a Gillette hotel.

Two men were from Gillette and another came from Casper. All three were ticketed and released. A fourth man came from South Dakota and was arrested for soliciting a minor. Based on his conversations leading up to the meeting, he believed the woman would be 16 years old.

Between last Wednesday and the time of the sting Friday afternoon, 79 potential buyers responded to the posts and 10 made plans to show up at the hotel, with some backing out for various reasons.

“We have seen a lot of activity in Gillette,” Markham said.

For Uprising Wyoming, their training helps law enforcement learn hands-on through the sting operation and aims to shift the policing focus from a victim-focused lens to one focused on the offenders, or buyers, Markham said.

“Focusing more on the offender side, the buyers and the exploiters, accomplishes so much more and can actually start to chip away at the problem, versus where it’s historically just been all of the focus on the victim side of things,” she said.

For police, the training was informative and the sting operations could serve as a deterrent, alerting the public that the department will be monitoring online buyer activity and undergoing more sting operations.

“We’re going to keep doing these, so you never know when it’s us,” said Police Sgt. Derek Weinhardt to the second Gillette man who was detained Friday.

Uprising Wyoming, the anti-trafficking organization, is based in Sheridan and was founded in 2019. The organization aims to increase awareness and education about human trafficking, including sex and labor trafficking.

One educational component focuses on changing the preconceived notions many have about what sex trafficking is and what it looks like.

The sensationalized images from popular culture can obscure what the reality of trafficking looks like, Markham said. Those who are forced or coerced do not always visibly appear so. There are many who are trafficked through familial trafficking and other ways that don’t align with antiquated language and tropes surrounding ideas of trafficking.

In Wyoming, the organization sees the most trafficking cases from Casper, Gillette and Rock Springs. Markham said that the transient nature of extraction industries and other jobs in Campbell County may contribute to its prevalence.

Johnson and Charlie Falkis, each with Uprising Wyoming, have been trafficked for sex in their own lives.

For Johnson, who was trafficked by her then husband when living in another state, she said that facing the men caught trying to buy sex that day brought her a mix of emotions. It was nerve-wracking, challenging, frustrating and healing.

“In some aspect it’s healing,” she said. “Empathy is important to have in this world because people struggle with stuff and it turns them into monsters. We want to prevent that.

I wonder if the root of the problem is the unhealthy attitude towards sex fostered by the religious fanatics who don't believe in sex education...just a thought.

I am one of those religious people. We believe in sex education we just don’t agree with sex before marriage. I think the problem more so comes from hmmmm let’s see, the fact that Satan is in this world. And most likely these people did not grow up with the Lord in their daily lives. So don’t blame God. Blame Satan and this nasty world we are living in.

You prove my point, thank you.