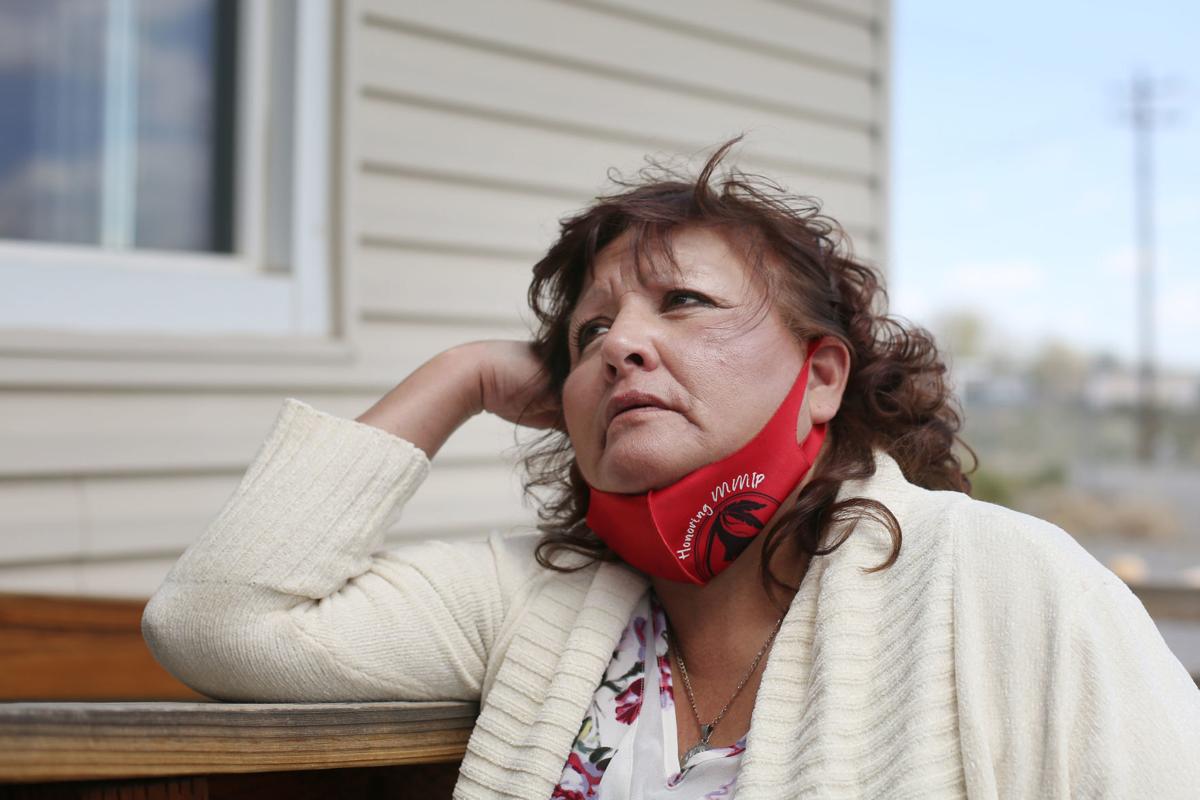 Nicole Wagon talks about her two daughters, Jocelyn and Jade, on May 18 in Riverton. Jocelyn was murdered in 2019. Jade was found dead a year later. 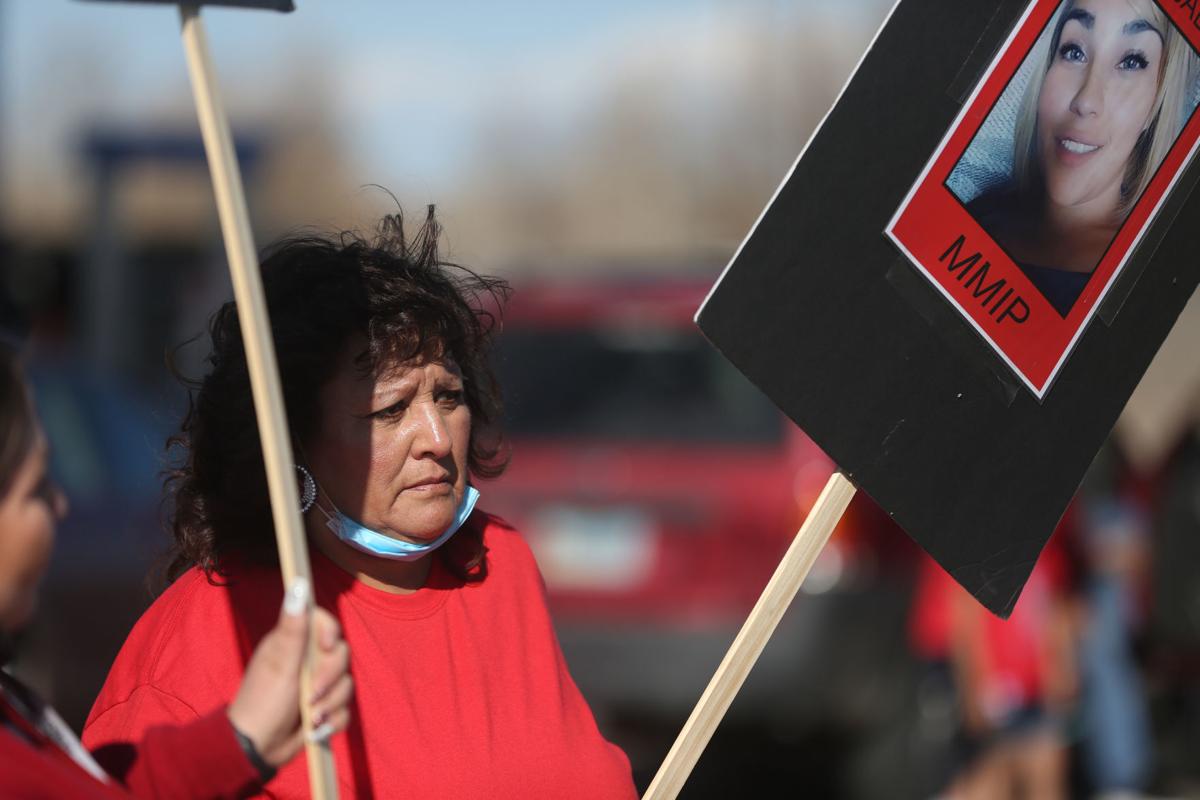 Nicole Wagon assembles a banner in honor of her two daughters, Jocelyn and Jade, at a march for missing and murdered Indigenous people on May 5 in Riverton. "I know my daughters live with me; they live in my heart," Nicole said.

Nicole Wagon talks about her two daughters, Jocelyn and Jade, on May 18 in Riverton. Jocelyn was murdered in 2019. Jade was found dead a year later.

Nicole Wagon assembles a banner in honor of her two daughters, Jocelyn and Jade, at a march for missing and murdered Indigenous people on May 5 in Riverton. "I know my daughters live with me; they live in my heart," Nicole said.

CASPER — At all hours of the day, Nicole Wagon gets calls, texts, emails and Facebook messages.

Sometimes it’s an 11 a.m. text from a family member of someone who’s gone missing. Other times it’s a phone call at midnight from someone who lost a loved one. Occasionally, it’s a reporter calling and asking for an interview.

Nicole has become an advocate within the missing and murdered Indigenous persons movement in Wyoming. She attends marches, communicates with victims’ families and participates in the growing eff ort in the Equality State to address what has been a long concerning issue, even if it was only in the past few years that many outside the Wind River Reservation began taking note.

The issue is a personal one for Nicole. She lost her two oldest daughters over the past two years.

On Jan. 5, 2019, Jocelyn Watt — her eldest — and Watt’s partner Rudy Perez were murdered at their Riverton home. More than two years later, the case remains unsolved despite numerous interviews, video surveillance and investigations by multiple agencies on the Wind River Reservation.

A year later, tragedy struck again. Jade Wagon was found dead nearly a month after Nicole reported her missing. At the time, investigators ruled the death as accidental, but Nicole was skeptical. That skepticism proved to be correct. According to Nicole, a warrant was issued for a suspect in Jade’s case in February of this year. But so far, no one has been arrested.

Now, Nicole’s purpose is threefold. From her home in Riverton, she has become a pillar of support within the state’s missing and murdered Indigenous persons movement. She continues to pursue justice for Jocelyn and Jade. And she remains the matriarch of her family, double and triple-checking on her three remaining daughters.

She instilled love, solidarity, and a mixture of Indigenous practices and Catholic beliefs in all five of her daughters. Now and more than ever, she’s determined to keep her family together while remaining relentless in seeking justice for her daughters.

“I know my daughters live with me; they live in my heart,” Nicole said. “I gave them life ... but it’s not easy. You get back up, and you keep going.”

In Wyoming, Indigenous people make up 3% of the state’s population. But they account for 14% of missing persons and 21% of total homicide victims in the state, according to a January report by the Wyoming Missing and Murdered Indigenous Persons Task Force.

“This report was really eye-opening, but I think it confirmed what a lot of us knew already that was happening out there,” Sen. Affie Ellis — a Cheyenne Republican, citizen of the Navajo Nation and co-chair of the Legislature’s Select Committee on Tribal Affairs — said at the time.

The issue is recognized in Indian Country, but for a long time received little attention away from it. That changed a few years ago when movements began to spring up in multiple states.

In July 2019, Gov. Mark Gordon formed the Missing and Murdered Indigenous Peoples Task Force. At the time, it was not known how many Indigenous people were missing in the state.

A pair of bills followed in March 2020 that improved data collection of missing and murdered people by requiring law enforcement agencies to include biographical information on the affected individual, and for the Eastern Shoshone and Northern Arapaho — the two tribes who live on the Wind River Reservation — to implement their own Amber Alert system.

Many on the Wind River Reservation are critical with how the Bureau of Indian Affairs has handled the issue, arguing the agency lacks communication and transparency. A Congressional subcommittee hearing from 2019 revealed two major flaws: the agency had only filled half of the positions available, and there was a severe lack of funding.

And historically, the federal government hasn’t kept its end of the bargain when it comes to treaties. The lack of funding, data collection and coordination between different agencies has had dire effects on Indian Country.

When a Native American woman goes missing, the solution should be to find her, said Jordan Dresser, chairman of the Northern Arapaho Business Council. Instead, the disappearance gets turned into a substance abuse issue, or even worse, the missing woman brought it upon herself.

“Rather than saying, ‘Hey, somebody’s missing, they should be home by now,’” he said. “They deserve the respect to be found, but the fact that Native People are viewed as less than, we get less than services, less than attention, less than humanity, and in a sense, less than empathy.”

Dresser is the youngest of four children, with three older sisters. He was raised with a strong female support system and has witnessed the disrespect Native American women often face.

Many fail to recognize that missing and murdered Indigenous people have been an issue since first contact. When history books and Disney movies portray Sacagawea or Pocahontas’ lives as joyful love stories filled with expedition, it gives air to the belief that Indigenous lives don’t matter, Dresser points out.

But if you ask Dresser what’s the biggest hindrance is when it comes to addressing the number of missing and murdered Indigenous people, he’ll point to funding.

Jocelyn Watt and Jade Wagon were adventurous and loved the outdoors. Jocelyn was a determined problem solver and a go-getter. Jade was the free-spirit who was always laughing and dead set on having a good time. They inherited a deep admiration of their community and a respect for their elders.

“’What makes you beautiful?’” Nicole used to ask her daughters when they had a bad attitude or were upset. They always responded with the same answer. “Your heart.”

Nicole has become extra vigilant in the wake of their deaths. She reaches out regularly to her three remaining girls. “Are you OK?” she asks them.

“If you ever knew my oldest daughter (Jocelyn),” Nicole said. “She was so protective of her family. Nothing would stop her. If this happened to me, my daughter would have stopped at nothing to make sure there was justice for her mom; that’s what keeps me going. I can’t give up on my daughters.”

Nicole’s support system is extensive. She has friends, family and advocates she can call any time, day or night. When she sees tribal members succumb to vices and fall into a downward spiral of depression, that’s when things get tough for her. She wants to be able to help everyone who reaches out, but her plate is full.

“Yes, I’ve lost two,” she said. “But I’m marching, I’m advocating, I meet with many different political figures, leaders of my tribe, and pushing for victims advocate positions.”

As they approach the same age as their sisters were when they died, her daughters have wondered whether they will survive. And Nicole has to remind them, “Don’t question yourself that way,” she said. “Be the best auntie and spoil your (niece and nephew), and love that baby unconditionally.”

Still, from time to time, Nicole asks herself: Where did she go wrong? Why did the creator choose her for this movement? But then she thinks about justice for her daughters, the healing that will coincide, and her current life with her remaining daughters and grandchildren.

And while justice hasn’t been served, Nicole continues to be a rock for her family and the shoulder to lean on for those seeking help. She’ll continue to be the loudest voice in the room.

When Nicole and two of her daughters showed up to march for missing and murdered Indigenous people in Riverton back in May, a significant chunk of the crowd there knew who she was. Heads turned, and eyes darted across the parking lot where people were gathering. Most in the crowd wore red.

With the help of her two daughters, Nicole took her time and carefully assembled one of the march’s most prominent posters. It featured photos of Jocelyn, Rudy and Jade.

In a sea of marchers, Nicole and her family found their way to the front. Now, everyone would see Jocelyn’s and Jade’s faces.

“I’m going to keep putting their faces out there,” Nicole said. “You’re going to look. They had a face, they had a life, and you had no right to take it.”