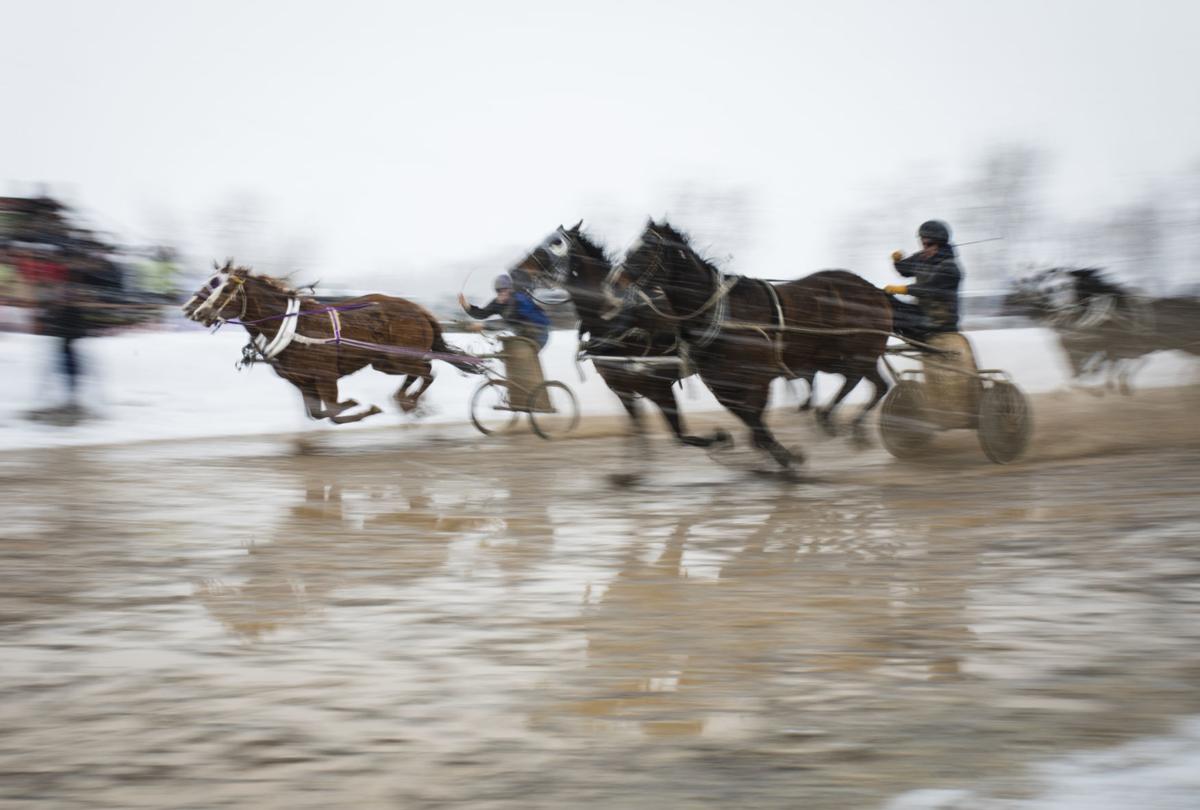 Drivers Allen Hale, Roy Morgan, and Mike Newman compete in the tenth race of the day during the second day of the LCFWS Shriner's Chariot Races Sunday, Feb. 16, 2020, at the track in Afton. There were 23 drivers competing in Sunday's races. 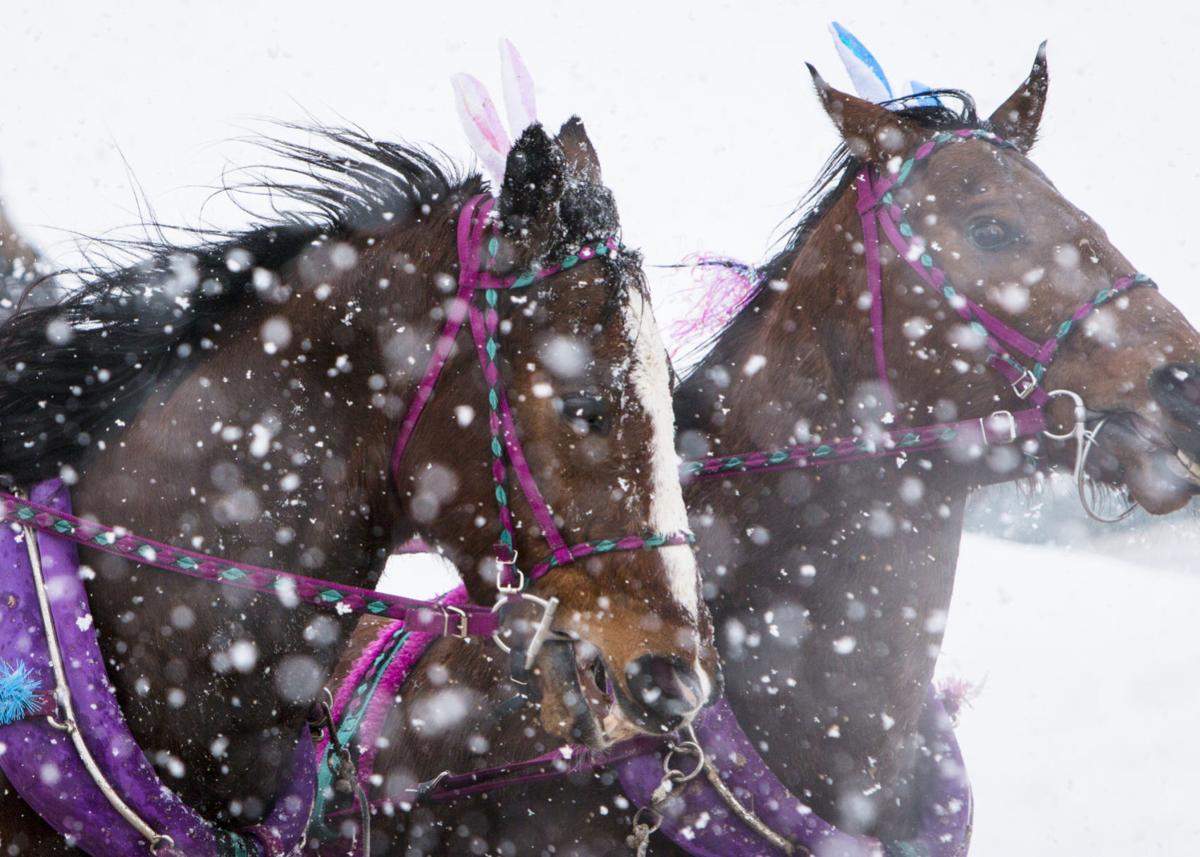 Clay Giles's horses, dressed in bunny ears and other festive decoration, walk back after finishing their race Sunday, Feb. 16, 2020, during the second day of the LCFWS Shriner's Chariot Races at the track in Afton. Hollis Concrete/Luthi Ranch, driven by Coralia Robinson from Star Valley, was the winner of the races.

Drivers Allen Hale, Roy Morgan, and Mike Newman compete in the tenth race of the day during the second day of the LCFWS Shriner's Chariot Races Sunday, Feb. 16, 2020, at the track in Afton. There were 23 drivers competing in Sunday's races.

Clay Giles's horses, dressed in bunny ears and other festive decoration, walk back after finishing their race Sunday, Feb. 16, 2020, during the second day of the LCFWS Shriner's Chariot Races at the track in Afton. Hollis Concrete/Luthi Ranch, driven by Coralia Robinson from Star Valley, was the winner of the races.

JACKSON — David Stevens put $210 on Coralia Robinson and her horse team from Luthi Ranch in the final chariot race Sunday.

The quarter-mile dirt track at the Lincoln County Fairgrounds in Afton was by then mud-soaked and showing wear from pummeling hooves. In just the 23 seconds or so it takes a team to complete the race, the drivers themselves looked like they had crawled the length of the track, not raced in it in a chariot.

Robinson, running from the white gate closest to the spectators, was up against Jeremy Woods on the blue side. Charging through a thick snow up the track at nearly 40 mph, it became clear the horses were neck-and-neck with the finish line quickly closing in.

Robinson did get it, her team’s second victory across the two days of the Lincoln County Fair Winter Sports Chariot Races, which served as a rebirth for the once long-running Jackson Hole Shriners cutter races.

“We went to one in Jackson like 20 years ago,” Stevens said, flanked by his girlfriend Bridget Jenkins. “I’m so happy they brought it down here.”

The races, which raised over $13,000 for the Jackson Hole Shrine Club, came about five weeks before the first horse team hit the track on Saturday. The Shrine Club held the races in Jackson starting in 1972 and finally folded in 2017.

The money the club made this year will benefit the Shriners Hospitals for Children.

The All-American Cutter Racing Association, however, was formed in 1948 in Thayne and has continued to run its races on the dirt track in Afton. Misty Nelson, an organizer with the All-American, got the Shrine Club on board, got the Lincoln County Fair Board interested and helped revive the races this year.

The biggest challenge that plagued the Cutter races in Jackson, and continues to plague the niche sport today, is a lack of participation. In Jackson the races were run on a snow track, a fun wrinkle to the sport for the spectators but largely considered a risk for the drivers and horses. Though a heap of Wyoming snow dumped on the track Sunday, the temperatures hovered in the 20s and the track kept up well enough to keep the races afloat.

“Chariots always run in the winter,” Nelson said. “The only time you can’t run ’em is if it’s not 10-above and rising. Because it will freeze the horses’ lungs and kill them.”

Stevens said he bet on four of the races Sunday, winning three. One of his victories came from a smart $80 bet on Johnny Robinson, husband of Coralia and the All-American club president. He barely edged Misty Nelson’s husband, Tom, in their race on Sunday.

Times were a bit slower on Sunday compared with Saturday, with the wheels of the chariots sinking into the track divots while cold, sloppy mud showered the drivers. Robinson came off the track with a victory and a beard beginning to weigh down with quickly freezing mud.

“This has been pretty good, but it’s probably the worst track we’ve had all winter,” he said. “Usually it has freeze-dried, but it’s just that time of year.”

Like just about every driver who carries on the tradition of chariot racing, Robinson picked up the sport from his father. The phrase “dying sport” is frequently thrown around by drivers like Robinson who’ve run horses all their lives.

“It’s an expensive hobby, you know,” he said. “You get buckles and trophies and blankets out of it, but it’s more fun, it’s a family thing. I grew up doing it. I got this bad habit from my dad.”

The expense of owning horses, coupled with the preparation to have them race-ready, is only one aspect drivers cite for dwindling numbers. There’s also a lack of interest from the new generation. Robinson is doing his part to pass on the habit.

His daughter, Layne Robinson, is a senior in high school and spent her time pitching in with team preparation at the horse trailer on Sunday. She drove a team for the first time in an All-American race this winter, where she edged her dad for victory after nearly running him off the track.

Admittedly, Layne isn’t sure how committed she’ll be to driving race teams. There’s a lot of work in just keeping the horses ready, and when she looks around the infield at chariot races, she doesn’t see many drivers her age fighting off nerves to hop into the chariot themselves.

“There’s not a lot of kids my age in the valley that do it,” she said. “There’s only one other kid that participates in it that I know of; it’s definitely a dying sport.”

Bringing back the Shriners for this race is not a one-off event, at least that’s what those involved are banking on. Surely, another weekend of racing a year isn’t going to save their sport, but it helps. Nelson said some veterans of the Jackson rendition of the race came out not with horse teams, but to support from the rail.

By the end of the weekend, she said, 10 of those former drivers expressed interest in working their horses into good enough shape to jump in the chariot again this time next year.

That’s about all organizers and competitors can ask for.

To get money down on a team, there’s an auction before each race. The winner of the auction for one team goes up against the winner of the auction for the other team. Their winning bids then go into a pool, with 15% of that money going to the Shriners. The rest goes into the pocket of the bettor who picked the winning team. Three or four of these head-to-head matchups can go on during just one race, with the bet takers scanning the crowd for new bettors until the horses get into the gate just moments before exploding down the track.

The three men scanning for those bets let loose a quick, snappy guttural noise with each raised bet, sending an arm into the air to alert the auctioneer to up his offer. Like the drivers themselves who brought a few generations of experience to the fairgrounds with them, the bet takers were a grandfather-father-son trio making their return to cutter racing for the first time since the Jackson race shuttered.

“I jumped up and down with glee,” he said. “Because I was mad when they stopped running it (in Jackson).”

Johnson said he moved out of Jackson when it got too expensive to live there, though he once owned the rodeo going back to the 1960s. In 1957, he said, he put together a chariot team composed of his roping horse and a friend’s mount. He didn’t stand much of a chance against the quarter horses he took to the gates with.

Johnson Sr. is hopeful the races will be back in Afton next year, and that it will be him, his son and grandson holding the middle of the track between races, scanning the bleachers for bets. He played his part in creating at least one pair of fans Sunday in Stevens and Jenkins.

Stevens was off to the betting trailer almost as soon as the final race came to a close to learn his earnings.

“She said I’m the big winner,” he said, hopping out with his payout stub in hand.