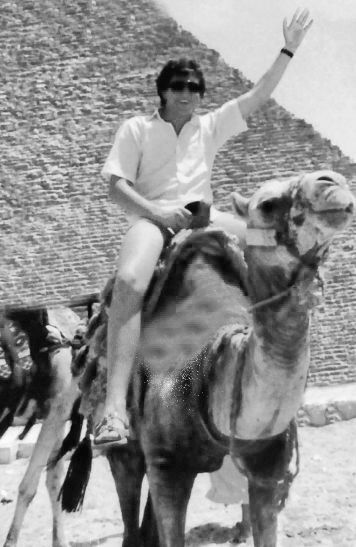 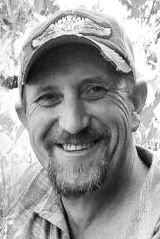 Paul left this world surrounded by some of his favorite things. He carefully packed his fishing pole, binoculars, Metroline dart set, big candle belonging to his girlfriend, photo albums and framed photographs of his son and mom and himself enjoying family activities.

He carried them to his backyard and sat them down. With a black marker he wrote goodbye messages on the glass of the pictures.

While looking through a gap in his trees to view Keyhole Reservoir where he frequently fished from his boat, Paul, 53, chose to move beyond this life.

At age 18, Paul had become fascinated by the Egyptian practice of gathering possessions to accompany one into the afterlife after climbing into Cheops Pyramid through the tomb raiders’ entrance at Giza, Egypt, and later, descending into King Tutankhamen’s tomb in the Valley of the Kings.

When Paul embarked on his European and Egyptian summer, he had just graduated from Tongue River High School in Dayton in 1985.

After returning to Wyoming, he briefly attended Sheridan College. Then in 1987, he headed for the West Coast, making it as far as Lake Tahoe to work construction and ski, ski, ski.

During the next four years, Paul lived in Reno working at Color Tile and driving a cab, but decided to move on to California after unexpectedly coming home early from work one afternoon and finding his male roommate wearing a short negligee and Ostrich feather slippers. The Wyoming country boy migrated to Hollywood, still with Color Tile. Later moves were to Sacramento and Denver.

After city life lost its allure, Paul returned to Sheridan County. In his mid-teens, Paul had developed a strong work ethic, starting at Groshart’s Amsden Creek Ranch, which lasted his lifetime.

In home territory he held a series of jobs in construction, radio and you name it. Finally, he attended technical school in Billings, Montana, graduated and worked long term for a pay phone company until the invasion of cellphones.

He married Kristi Petty in the Big Horn Mountains in June 1999. Their only child, Scott Thomas, was born in July 2000 in Gillette, after coal mining lured him away from the Sheridan area. Paul and Kristi later divorced.

Until 2018, he ran equipment at the Black Thunder and North Antelope Rochelle mines. At the end of his coal career, he bought a place with acreage in Pine Haven near the shore of Keyhole Reservoir, primarily to live close to the fish since those little, or big, swimmers called to his Swedish genes. And, wow, he prepared them as well as a five-star chef.

At the time of his death, Paul was employed by the local NAPA dealer in Sundance.

In addition to annually hunting elk, deer and antelope with his son Scott, he loved the Denver Broncos, fishing, mountain camping, coaching Scott in Little League, the Broncos, attending concerts, golfing, hanging out with Scott, visiting his “brothers” Tom and Rollie, four-wheeling, the Broncos, snowmobiling, playing pool and throwing darts (at which he excelled in state and regional competitions). And the Broncos!

If you needed a laugh, Paul would fill the bill with his antics, a regular Jim Carrey with his facial contortions, awkward dancing, strutting, joke-telling, etc. With his Popeye imitations, he convinced Scott at age 2 that broccoli would make him a strong, funny man like his dad. It did. Scott grew to 6-foot-3, meeting his dad eye to eye.

Paul was a kind, loving human being, forgiving others who had deeply wronged him. He genuinely liked people. He was generous with smiles and hugs and always said “I love you” to his family and friends when saying goodbye. Always.

Too late we realized the depth of Paul’s depression. Too many years of Adderall for his ADD, of shift work at his mining job and of self-medicating with alcohol slowly undid his ability to cope and resolve to live. Learn from Paul’s tragedy!

He was preceded in death by grandparents, Greta and Charlie Scott, Ruth Jackson of Arkansas and stepgrandfather, Jim Niner; and a special friend, Kassy Lawrence.

Paul has been cremated and a celebration of his life will be announced in the spring of 2021 after the grass turns green and we are vaccinated against the coronavirus. It will take place in the family field behind Gin and Cliff’s home in Dayton.

Sentiments for Paul may be written at kanefuneral.com.

This paid obituary was provided by family and friends.

I didn't know him , however his family and friends should be comended for the eloquence and honesty shared with us all

I'm so sorry to hear of this young man's death. Depression is such a sinister thing that can creep up on anyone. We need to find a solution to this problem. Mr. Pilch

I hope you have found some peace I just wish you could have found it in life.