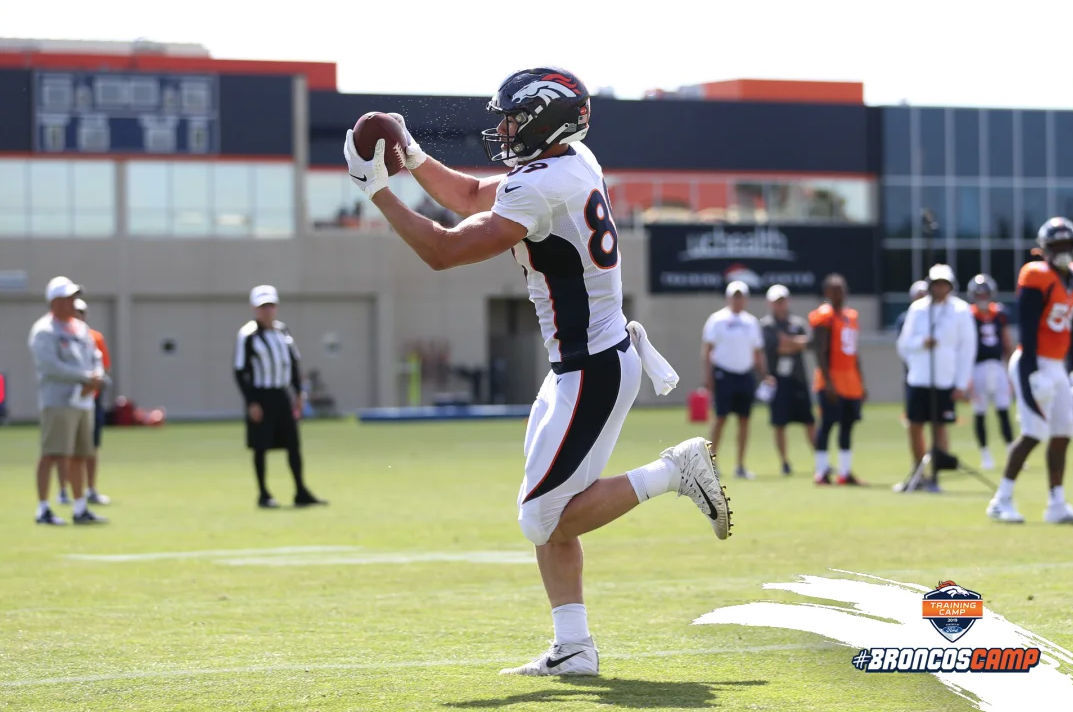 Former Campbell County High School quarterback and University of Wyoming standout Austin Fort catches a ball during a training camp practice with the Denver Broncos. Fort, now a tight end, is having a strong camp as an undrafted free agent. 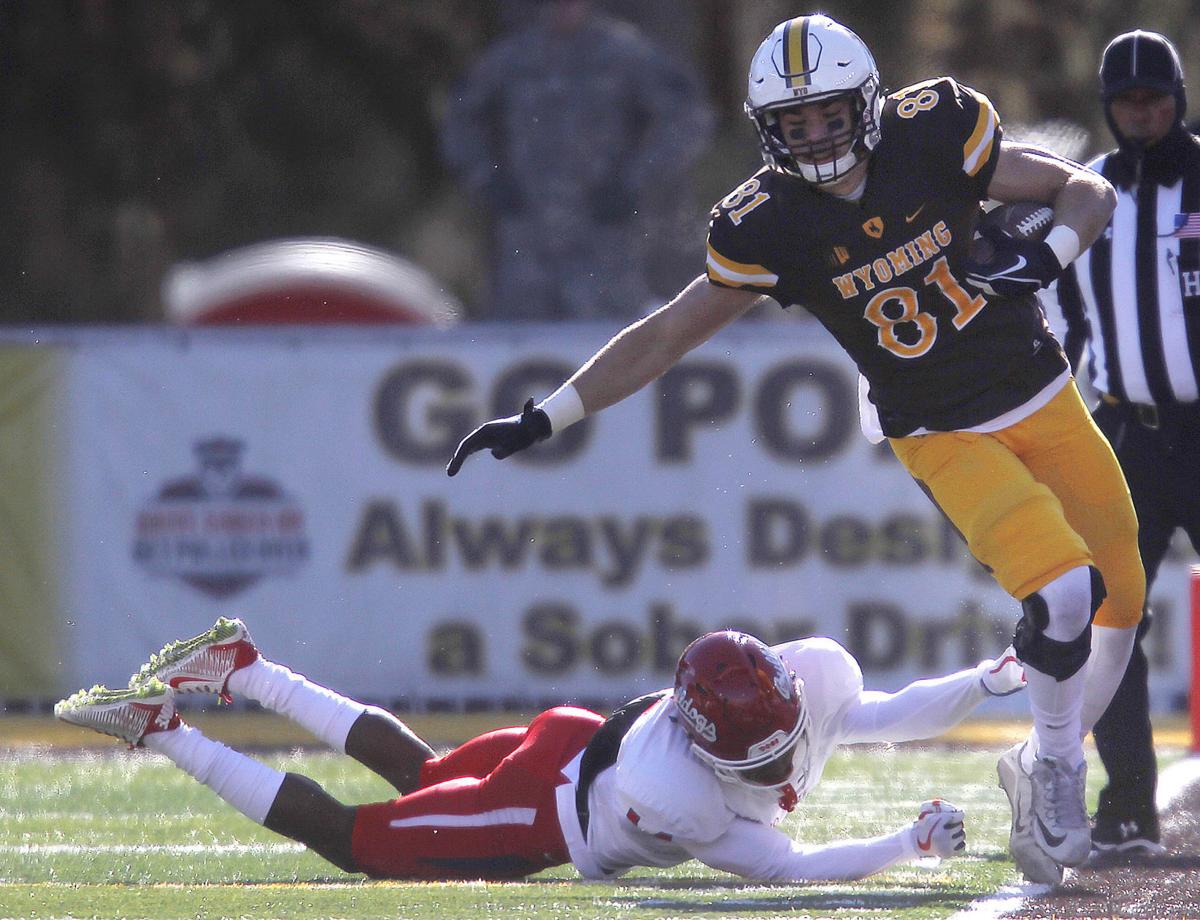 Former Campbell County High School quarterback and University of Wyoming standout Austin Fort catches a ball during a training camp practice with the Denver Broncos. Fort, now a tight end, is having a strong camp as an undrafted free agent.

Austin Fort, former Campbell County High School standout quarterback and class of 2014 graduate, has been turning heads in the NFL with the Denver Broncos, competing for a spot on the team as an undrafted rookie free agent.

Fort, who switched positions to tight end while playing for the University of Wyoming, wasn’t called during the NFL draft in April but caught the attention of the Broncos after marking a 4.56-second time in the 40-yard dash and a 6.8-second three-cone drill during his pro day.

The Broncos signed the 6-foot-4, 245-pound Fort right after the draft and he’s made an impression at camp in one of the team’s deepest positions.

ESPN Broncos beat reporter Jeff Legwold reported that Fort took some snaps with the first- and second-team offenses due to some injuries at the tight end position.

Fort, who grew up in Florida before moving to Gillette after his sophomore year of high school, is fighting to be one of the tight ends the Broncos take for the final roster. He also could possibly end up on the team’s practice squad or turn some heads in the NFL and find a spot on another roster.

Fort had to deal with change throughout his football career. He went to the University of Wyoming as a quarterback, transferred to a junior college to play quarterback, then transferred back to UW as a walk-on tight end.

He sustained injuries along the way and only caught 17 passes in college.

Now, with a consistent camp and healthy, he’s been one of the pleasant surprises of the Broncos’ rookie class and has a chance at making the roster.

Last year, running back Phillip Lindsay, another undrafted free agent rookie, not only made the team, he became a starter and was named to the Pro Bowl.

The News Record caught up with Fort while he caught his breath Tuesday evening to discuss his journey with the NFL so far:

A lot of change and having to adjust has been your football story so far. Do you feel like that has helped you?

“It just made me deal with a lot of different types of adversities and hard situations, and now I can say I’ve been hardened by that and I’m just prepared. I feel like I’m prepared for anything, so I’m grateful for my path. I don’t have any regrets. I feel like I was meant to be where I am now.”

What has been your mindset going into the NFL undrafted with a lot of competition to make this team?

“You got to take it one day at a time. Every single day I got to bring my best and I got to put my best foot forward. If I do that, if I take the coaching I’m given and I get better every day, then I think I have a good shot of making the team. So all you can do is go out there and control what you can control and just give 100 percent of what you have to give. So that’s what I’m going to do, and let the pieces fall how they fall.”

Are there any players who have taken you under their wing these last couple of weeks?

“Definitely the older guys like Jeff Heuerman and Jake Butt, they’ve definitely helped me a lot, with some of the stuff they know. Even the quarterbacks are helpful, Joe (Flacco) and Kevin (Hogan), they always help me kind of see where I need to be.”

How has it been for you to be able to learn from some of the veterans of the NFL?

“You grow up watching these guys and you idolize them, and then next thing you know you’re in the same locker room. So, it’s pretty crazy at first, and then over time it becomes normal. Those guys, they’re great teammates and they’re so helpful, so I’m really grateful for that.”

What is the daily grind like at that camp? What’s the routine like? you get up in the morning and ...

“It’s professional football so you wake up early and we’re in the facility from about 7 a.m. to 9:15 at night every single day. We practice in the morning, and then in the afternoons you go to your meetings and you get a lift in, and you got more meetings and walk-throughs. So it’s a full-time job now. That’s kind of part of the deal if you want to be successful in the NFL.”

Was there anything about the NFL that struck you as different than you thought it would be?

“I think just the speed of the game was most surprising. The first time I practiced with the full team, just how fast everything happened and how fast every player is out there. You really got to know your stuff and be able to keep up with those guys. It’s just a whole another level.”

How has your experience in Gillette helped you in this big moment in your career?

“I came there and I played my last years of high school football there. I had a lot of fun. I loved my team. I loved my coaches. Coach (Vic) Wilkerson, he taught me a lot about the game and he just had a passion and I just had so much fun playing there and being in Gillette. I’m just really thankful for the time I spent there. It’s obviously got me where I am in my career now.”

Do you rookies stick together a lot at camp?

New head coach Vic Fangio, how are things running with him in there?

“He’s a really good coach. He’s coached a lot of teams. Before he got the head coach job he was known as one of, or the best, defensive coordinator in the league. So he’s got a great mind. He’s taught us all a ton already. I think it’s been a really good culture. ... We’re all bought in.”

Was there any one piece of advice you got in high school, college or even in camp that has stuck with you?

“Someone told me before I got to college: ‘No matter who you are, everyone thinks about quitting at some point. This game is really hard. You can’t ever quit. You got to stick through it.’ So that’s something that in my career, just like everyone else, I’ve had multiple times where it did seem like things were too hard or things weren’t going well (that) it might be better to walk away. So I’m glad I got that advice because I stuck it out and look where I am now.”

There was an open practice Saturday at Mile High Stadium, how big was that for you?

“It was just so much fun to run out on an NFL field and play in an NFL stadium. This is your dream. Since I was a little kid I just dreamed about it, so to have that moment coming out of the tunnel and running through the fans, it was really special.”

Fort will get a chance to prove he can play in the NFL when the Broncos play the Atlanta Falcons on Thursday in the Hall of Fame game, the first preseason game of the year.

The game will be played at Tom Benson Stadium in Canton, Ohio, ahead of the Pro Football Hall of Fame Enshrinement Ceremony Saturday.