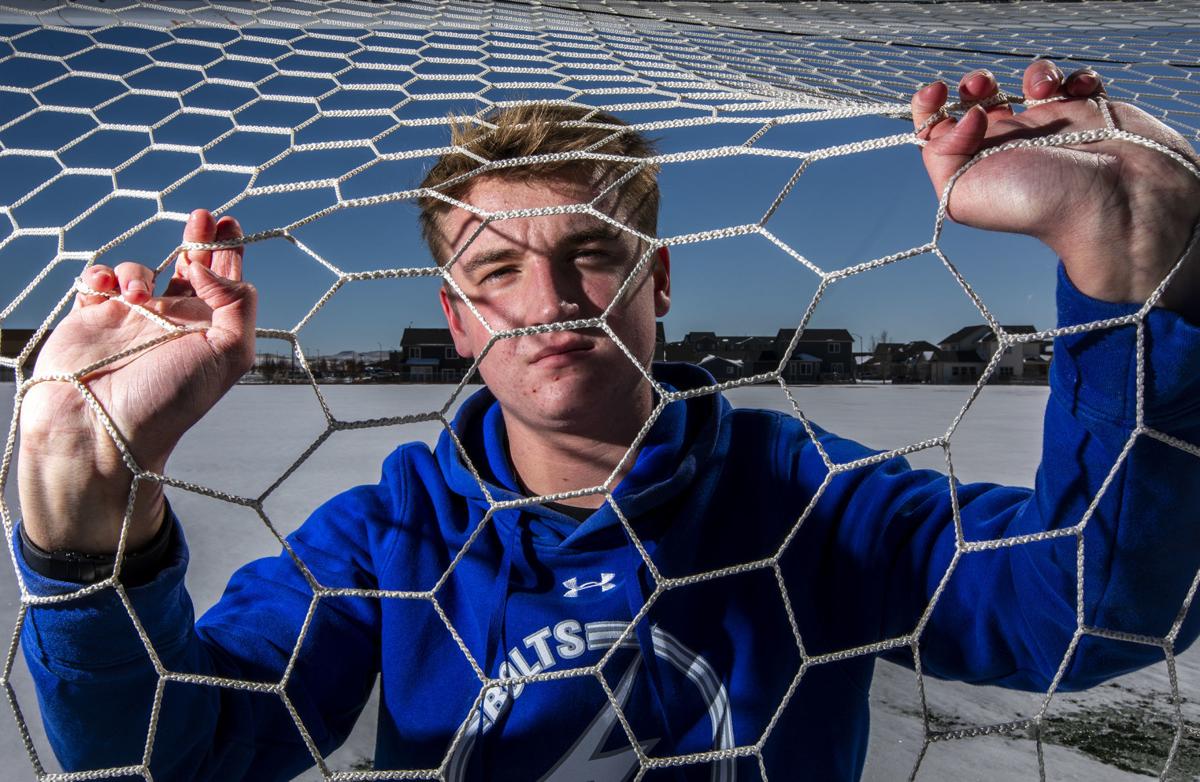 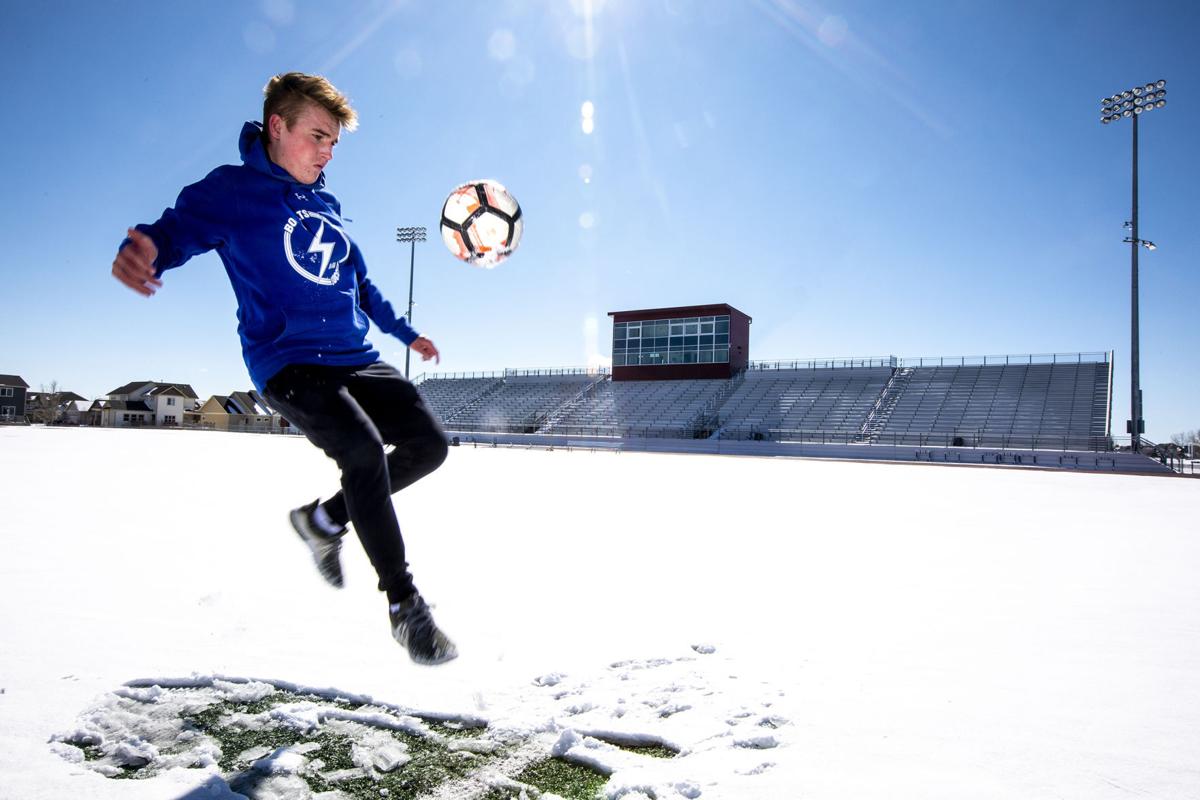 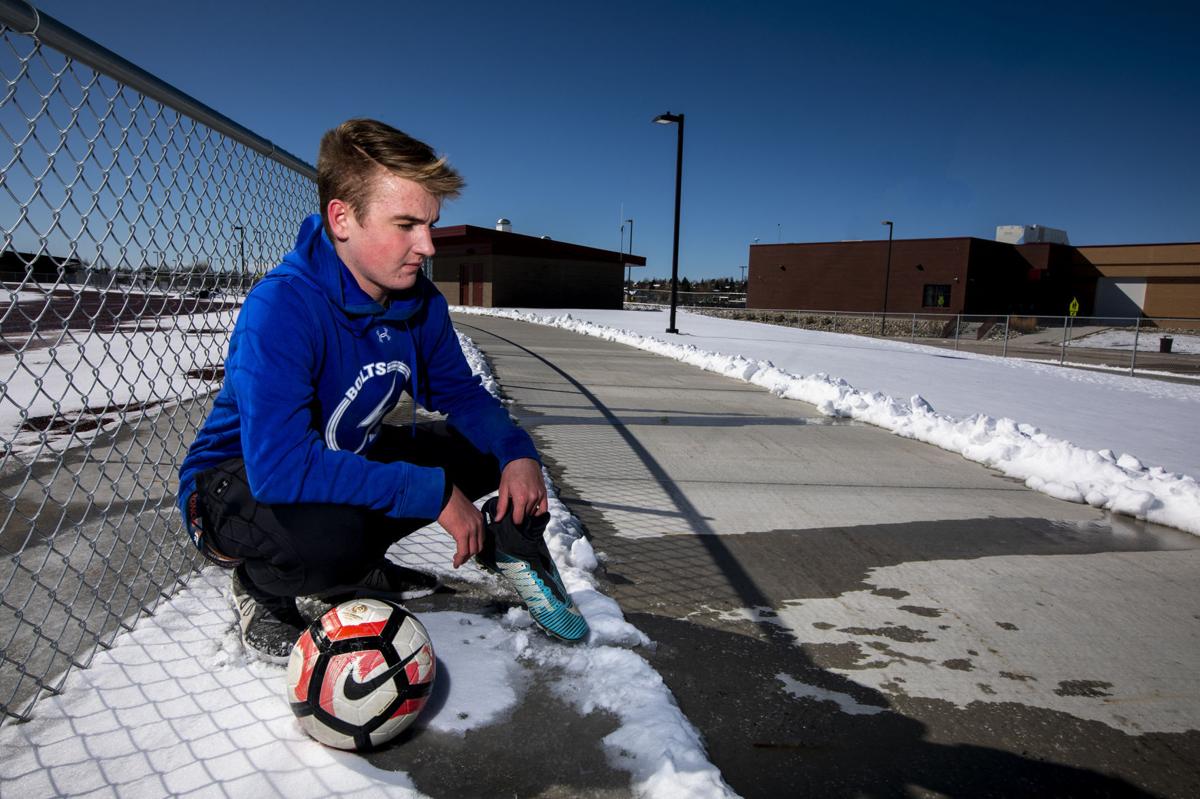 Nearly a year ago, Kolby Hayes had dreams of winning a high school soccer title this past spring as a high school senior and making a run at being named Wyoming’s Gatorade Player of the Year. Now his focus is on his second chance at having a college soccer career.

Nearly a year ago, Kolby Hayes had dreams of winning a high school soccer title this past spring as a high school senior and making a run at being named Wyoming’s Gatorade Player of the Year. Now his focus is on his second chance at having a college soccer career.

Soccer season was supposed to be the payoff at the end of a long, trying year for Thunder Basin senior Kolby Hayes.

The blows started falling last year at the state soccer tournament when the attacking midfielder broke his hip in the Bolts’ first-round game against Casper-Kelly Walsh. Then he suffered the same injury during an open soccer session at the Campbell County Recreation Center in October.

“When it happened, I knew exactly what happened,” he said of suffering the repeat injury. “It happened again when I was just getting out of rehab and just getting back into shape. Just knowing I had to go through that again and might not be able to play (was difficult).”

The two injuries, which are significant for soccer players, quickly turned into rather insignificant details in the big picture.

In January, Hayes ran into a rare medical issue that put him in the ICU for seven days and nearly caused his entire body to shut down.

The nightmare started when a new medicine he had started taking caused a severe allergic reaction. At first his family just thought it was a simple fever.

“It seemed like a normal sickness, not an allergic reaction necessarily,” Hayes said.

Hayes was prescribed an antibiotic that was supposed to get rid of the strange sickness, but it made it much worse. He woke up the next morning with a bad rash, then soon after Hayes said that “my stomach got really extended.”

Hayes’ family doctor first thought it was a burst appendix and as his fever reached 107 degrees and he was rushed to the emergency room in Gillette. It wasn’t long before he was on a medical helicopter headed to the Children’s Hospital in Denver.

The situation continued to worsen until Hayes went into sepsis and his body started to shut down.

“After that, that’s when they finally figured out I had DRESS.”

Drug reaction with eosinophilia and systemic symptoms is rare, occurring in one of every 1,000 to 10,000 drug exposures, according to the Cleveland Clinic: Center for Continuing Education. Like in Hays’ case, it most commonly affects the skin and various internal organs.

Hayes said he doesn’t remember much until his body came back to life and he woke up in the ICU.

“It was really surreal, because everyone was telling me what happened,” he said. “And at that point I was just grateful.”

He had survived, but wasn’t out of the woods and spent seven days in the ICU.

Laying in a bed for that long put another hurdle in Hayes’ path. Over that week, a large amount of his muscle mass had atrophied and “just being able to sit up was tough,” he said.

It took awhile before Hayes could even walk around for an extended period of time. Stretches, balancing on one foot and other basic functions followed before the standout athlete could start jogging again.

“It was really, really tough. Going back to physical therapy and stuff, I just had to start really slow,” Hayes said. “Just being able to do a lunge stretch was really tough on my body. I could barely even do a stretch.”

Even with those challenges and the fact that he was fresh off a 10-week recovery period from his broken hip, Hayes was on schedule to be ready for soccer season.

“It was really exciting,” Hayes said. “It seemed like everything was starting to pay off.”

But on March 11, just days after Hayes had been cleared to start practicing, he relapsed following a two-a-day training session.

“I woke up in the morning coughing and puking, shaking uncontrollably,” he said.

The terrifying process started over, but this time his parents took him straight to the emergency room and he was immediately flown back to the Children’s Hospital in Denver.

Hayes’ fever peaked during the flight and his temperature reading was at 108 degrees when he arrived — something multiple doctors told him they’d never seen before.

“The second time I was a little scared,” Hayes said. “The whole (flight) was kind of scary, because it was slowly getting worse and I knew what happened the last time.”

A desperate effort to reduce his fever followed, and Hayes remembers “just freezing” as he was covered in ice bags. His blood pressure also was so low that the nurses couldn’t find a vein for an IV.

“They just had to poke and prod until they got it,” Hayes said.

The decision to sedate Hayes and into an incubator was discussed before the fever finally broke.

Once Hayes was finally stable, he recovered relatively quickly because the medical staff knew what it was facing this time. Steroids were a big part of his recovery in January and doctors used that method to get him out of the ICU within a few days.

While the steroids made a big difference in the hospital, Hayes’ doctors are trying to get him off of them now because they have caused him to develop a fatty liver.

Hayes had big goals for his senior soccer season with the Bolts. He wanted to be a team captain, he wanted to follow up an all-conference season with an all-state selection and even make a run at Gatorade Player of the Year.

But most of all, he wanted a chance to compete for a state title. TBHS had one loss last season that happened in the state championship, and Hayes thinks this year’s team has the talent for an undefeated season.

However, around the same time he was in the hospital in March, the COVID-19 pandemic began to take hold in the U.S., including the sports world.

First came the cancellation of the 3A/4A state basketball tournament. Then the start of spring sports was pushed back and delayed again. Now the earliest possible start date would be May 1, leaving only three weeks before state soccer, which is scheduled for May 21-23.

For Hayes and many of his TBHS teammates, soccer is the only sport they play. They train year-round playing club soccer and going to open gym twice a week to prepare for the already-brief spring soccer season.

Now it’s a real possibility that Hayes and his lone senior teammate, Levi Rau, might never step on the field in a Thunder Basin jersey again.

“It’s my last year. I was really hoping I’d get to play,” Rau said. “Your mind just starts racing about, ‘When do we get to practice?’ and ‘When do we actually get to start our season?’”

The COVID-19 shutdown also is affecting the possibility of seniors getting recruited to play in college. Not only do coaches not have the opportunity to watch them play, but players are missing out on camps and other events that draw coaches’ eyes.

Hayes has already missed out on two of those opportunities. He was in the hospital during the week he was supposed to attend a camp at Laramie County Community College and another at MSU-Billings was cancelled because of the novel coronavirus.

Medical issues and now a global pandemic have tested Hays’ resolve and robbed him of a much-anticipated senior year. He’s been life-flighted twice, had fevers of 107 and 108 degrees and battled through four bouts of physical therapy.

But the senior, who somehow is far from being bitter about it all, has emerged with a new outlook on life.

“You just can’t take anything for granted,” he said. “Literally, any moment can be your last. It sounds cliché until it actually happens to you.”

Drug reaction with eosinophilia and systemic symptoms (DRESS) syndrome is a rare drug hypersensitivity reaction that often presents with rash, fever, eosinophilia and organ injury, typically of the liver or kidney.

Eosinophilia refers to an excess of eosinophils, a type of white blood cell often involved in allergic reactions, in the peripheral blood.

DRESS syndrome has been caused by many classifications of drugs in the past, most notably anti-seizure medications and antibiotics.

Symptoms of DRESS syndrome can manifest days to weeks into taking the drug and even after medication is stopped.

After the Northern Wyoming Community College District eliminated the athletics programs at Gillette and Sheridan colleges this past summer, Ko…