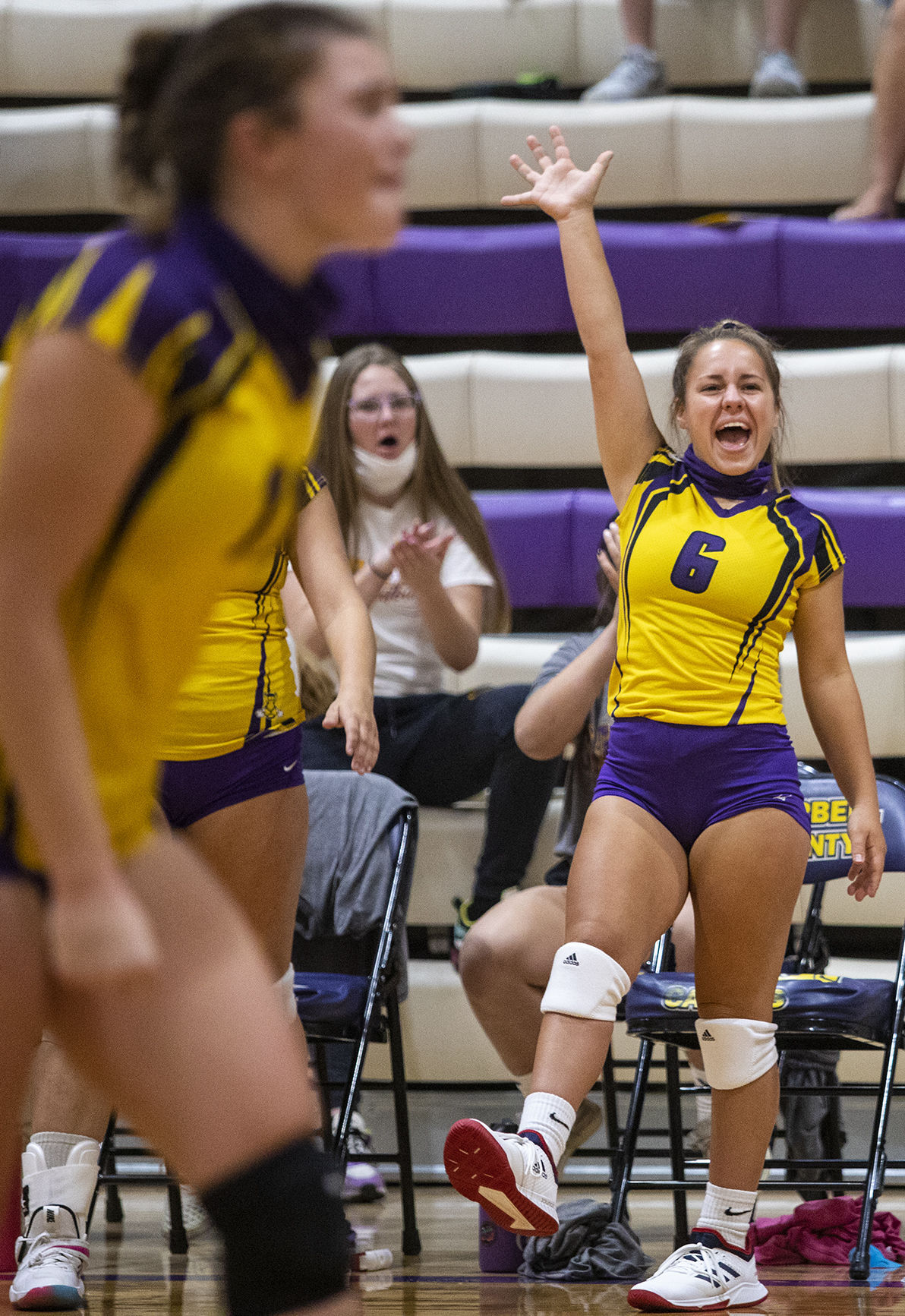 Campbell County High junior Tatum Brown keeps energy for her team high while cheering them on earlier this season. 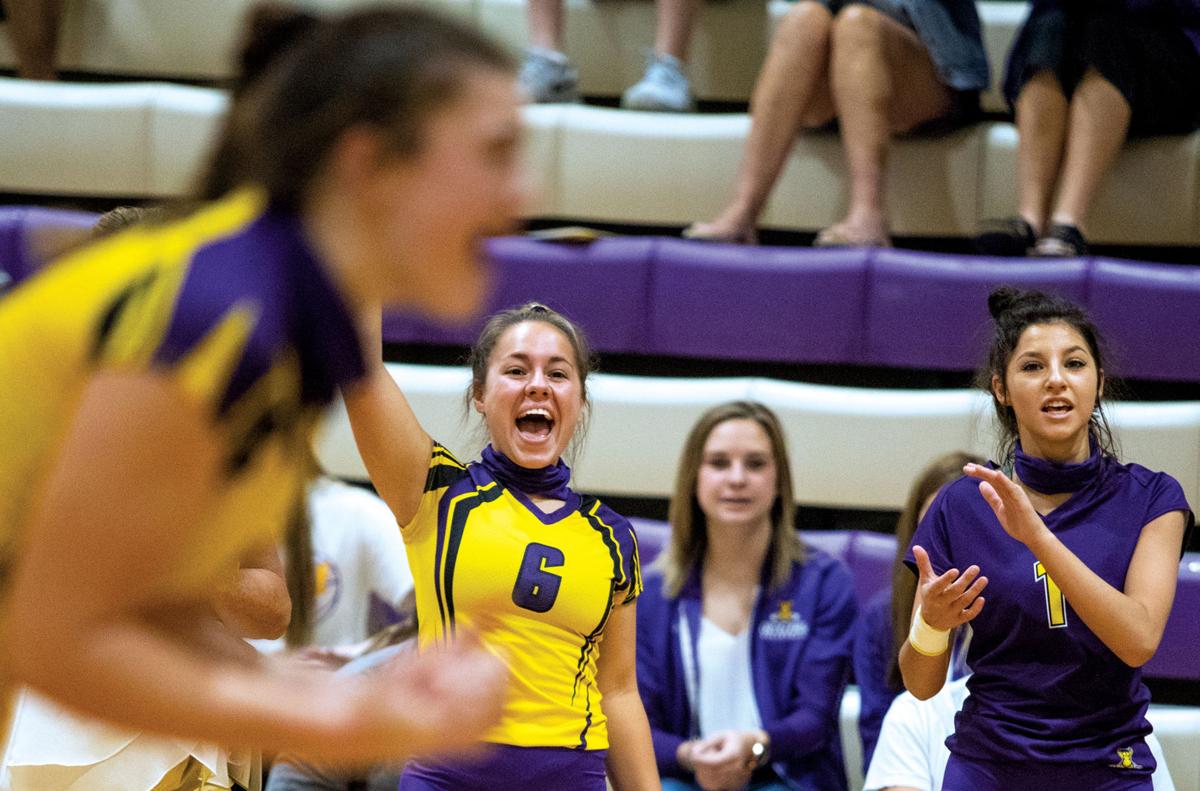 Junior Tatum Brown left, and senior Taylor Fischer encourage their teammates from the bench during a home match earlier this season.

Campbell County High junior Tatum Brown keeps energy for her team high while cheering them on earlier this season.

Junior Tatum Brown left, and senior Taylor Fischer encourage their teammates from the bench during a home match earlier this season.

Every high school athlete wants to be on varsity.

But for a volleyball coach like Marcy Befus, the best players to have are those willing to go wherever they’re needed.

Brown, a junior, and Hladky, a sophomore, have started the season splitting time between the JV and varsity rosters.

The point of moving the players between teams is to give Brown and Hladky playing time while also preparing them for the intensity of varsity volleyball, Befus said.

Both Camels said the experience is rewarding, but it forces the pair to remain on their toes at all times because they never know when the coach will call their number.

“It’s definitely a mental toughness thing,” Brown said. “You have to be ready to go. If one person is down it’s going to affect everybody. Everybody has to be ready at all times.”

Thankful for the opportunity to play at both levels, Hladky said she always tries to take advantage of the time she sees on the court.

“You have to always be prepared,” Hladky said. “You can never be surprised when you go in or when they need help.”

While Brown and Hladky can tweak their game on the JV squad as leaders of the team, both have to adjust to the change of pace transitioning to the varsity level.

“Once you go up to varsity, it’s a much quicker pace. You have to be able to make that switch almost immediately,” Brown said. “JV is where you get to work on the fundamentals.”

The value of having a dependable player on the bench behind her senior starters really eases the mind of a varsity coach, Befus said.

“Tatum is going to be ready to go in whenever I need her to go in,” Befus said. “She’s the leader on the JV court. She’s in all the time and she’s playing well.

“She serves well. She talks. She steps up and she’s always talking on the bench. She’s always ready to go and I have to have her there.”

While Brown is understanding of the role she play on both teams, Befus knows any athlete wants to compete at the highest level.

“I think she wants to be on the court more than she is right now, but she’s stepping up and taking charge of the JV team,” Befus said. “I tell her to be patient and when it’s your turn to go in, go do your job. And I’m confident that she will.

“I need her on the court. I don’t want her just sitting on the bench at the varsity level. She’s getting experience and she’s getting playing time.”

Having the insurance of quality players motivates everybody to play to the best of their abilities, Befus said.

“Taylor Fischer is playing well, but if something were to happen with her I know I have Tatum right there,” Befus said. “That keeps those varsity kids playing as well as they can because they know somebody is right there that can take their spot.

“That should be any girl’s goal. To take a varsity spot.”

Playing the same position as Fischer has led Brown to look up to her predecessor, learning everything she can from her on and off the court.

“Taylor and I have played together since my freshman year,” Brown said. “I’ve always looked up to Taylor. I definitely look up to her as a player and just as a person in general.

“She’s somebody that I want to fill her position next year and I hope I can take her position on and fulfill it my senior year.”

The experience moving up and down in the volleyball program has prepared both Brown and Hladky for what they’ll experience when it’s their turn to lead the Camels on varsity.

“Learning from our seniors and juniors today and seeing their leadership and taking that on when I’m an upperclassmen, it’s super important,” Hladky said.

While they may not be varsity leaders on the court, Befus said bringing both up benefits the Camels bench as well as the team on the court.

Both Brown and Hladky think the value of playing on multiple teams adds to an already strong connection they have with the other girls who make up the Campbell County volleyball program.

“The leadership that the seniors show, I’m happy how the younger kids are watching and following,” Befus said. “We just have a good thing going right now. I’m super excited about the things that I’m seeing with attitudes. I think kids just want to get better.”