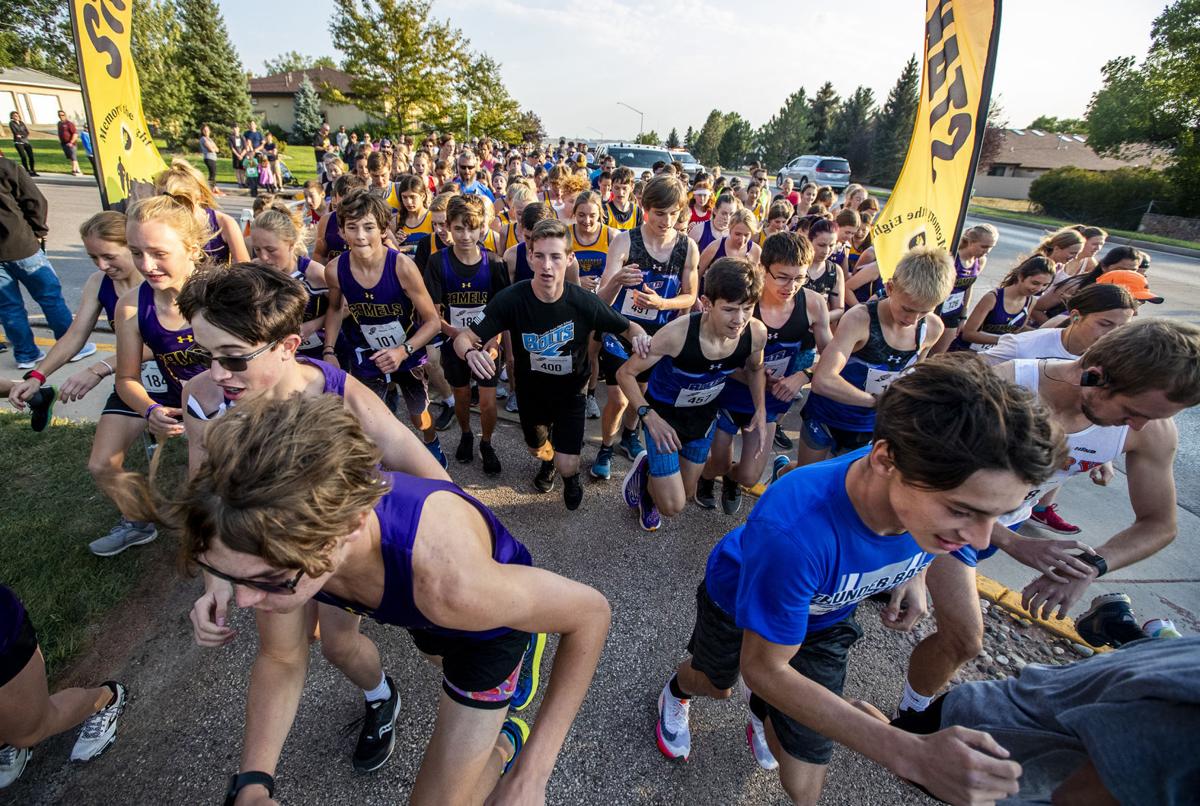 Runners depart the starting line during Thursday evening’s Memory of the 8 run along 4J Road. The run commemorates eight University of Wyoming cross-country runners who were killed on Sept. 16, 2001, including Gillette’s Morgan McLeland. 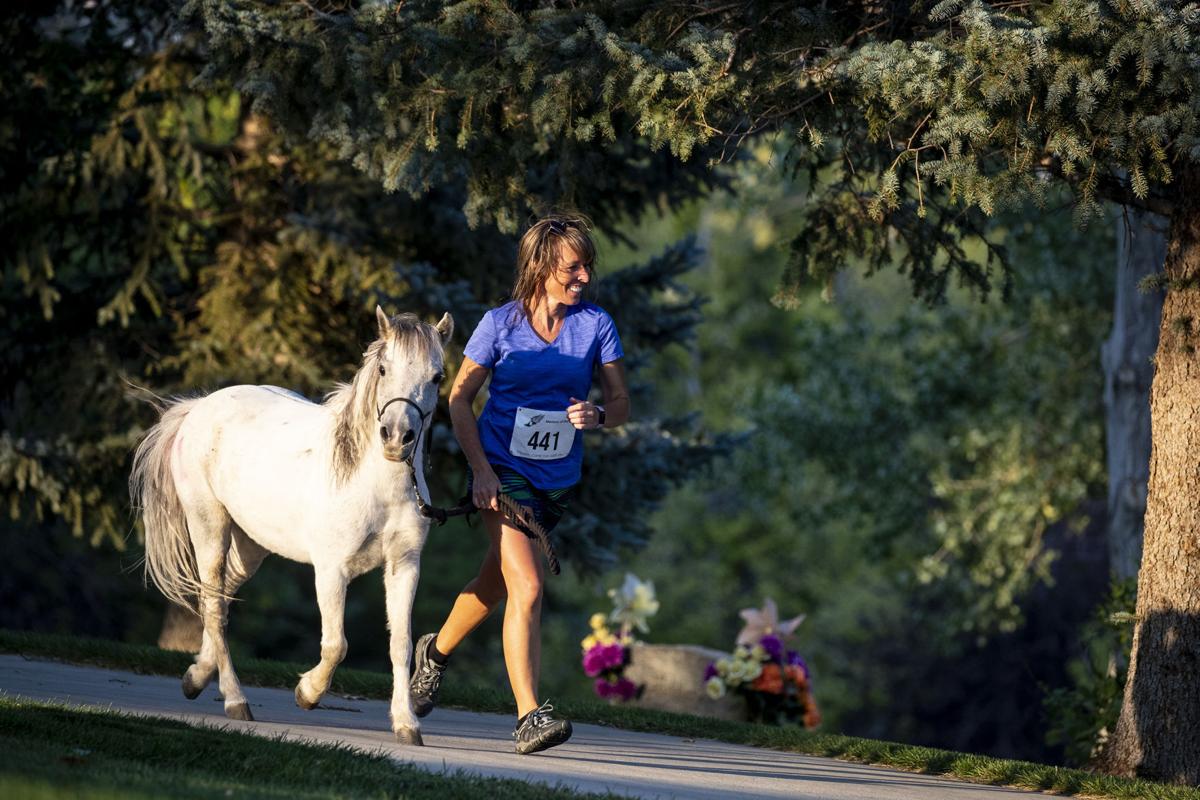 Trinitie Jenkins competes in the Memory of the 8 race with miniature horse, “Jingle”, by her side as they ran through Mount Pisgah Cemetery Thursday evening. 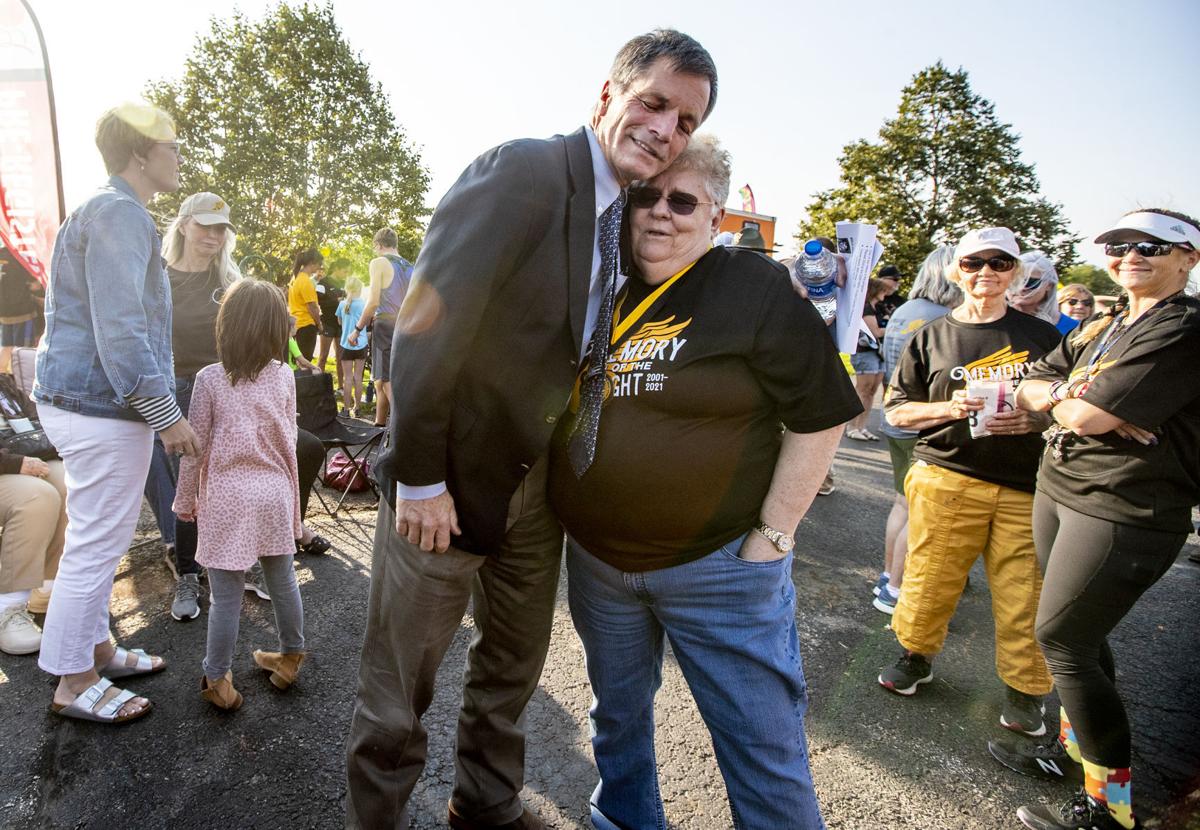 Gov. Mark Gordon hugs Debbie McLeland, mother of Morgan McLeland, who was killed along with seven of his teammates by a drunken driver on Sept. 16, 2001, during the 20th anniversary Memory of the 8 run Thursday evening. 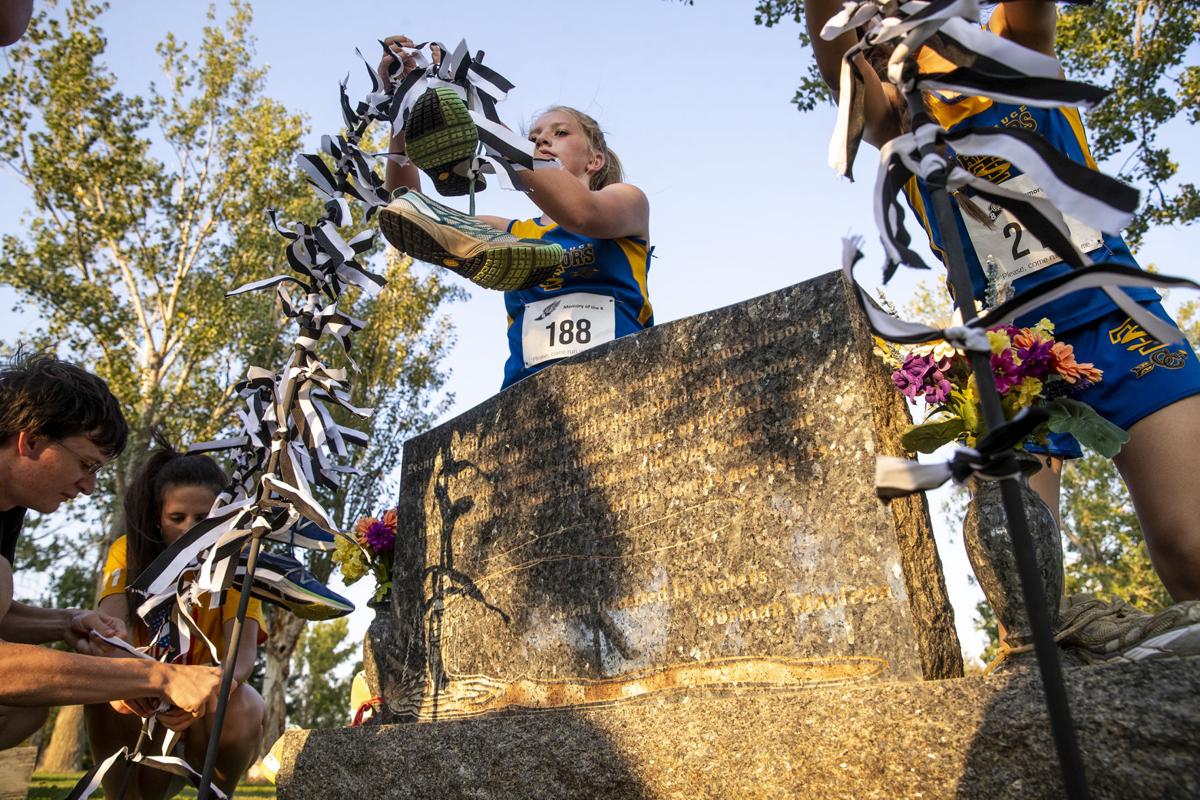 Runners tie ribbons to the grave of Morgan McLeland while running through Mount Pisgah Cemetery during Thursday’s Memory of the 8 race. 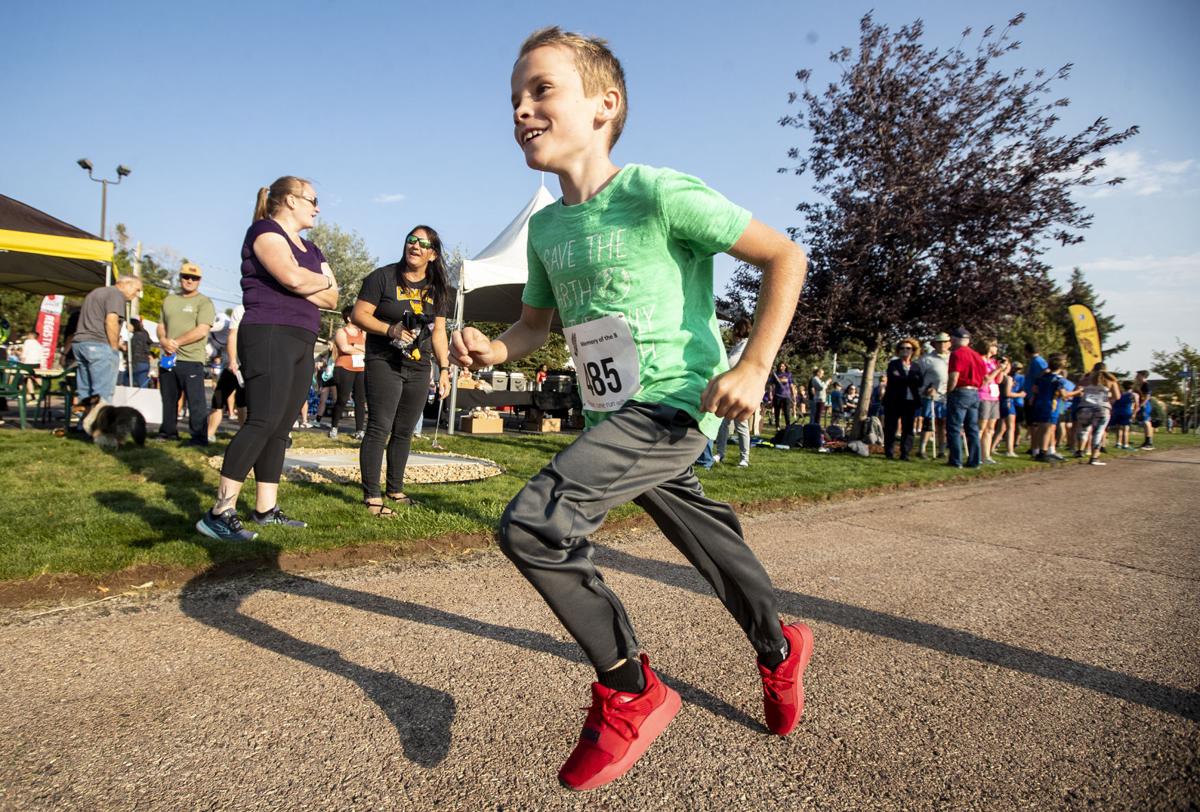 Mitchell Clark races across the finish line in the kid’s race during Thursday’s Memory of the 8 gathering. 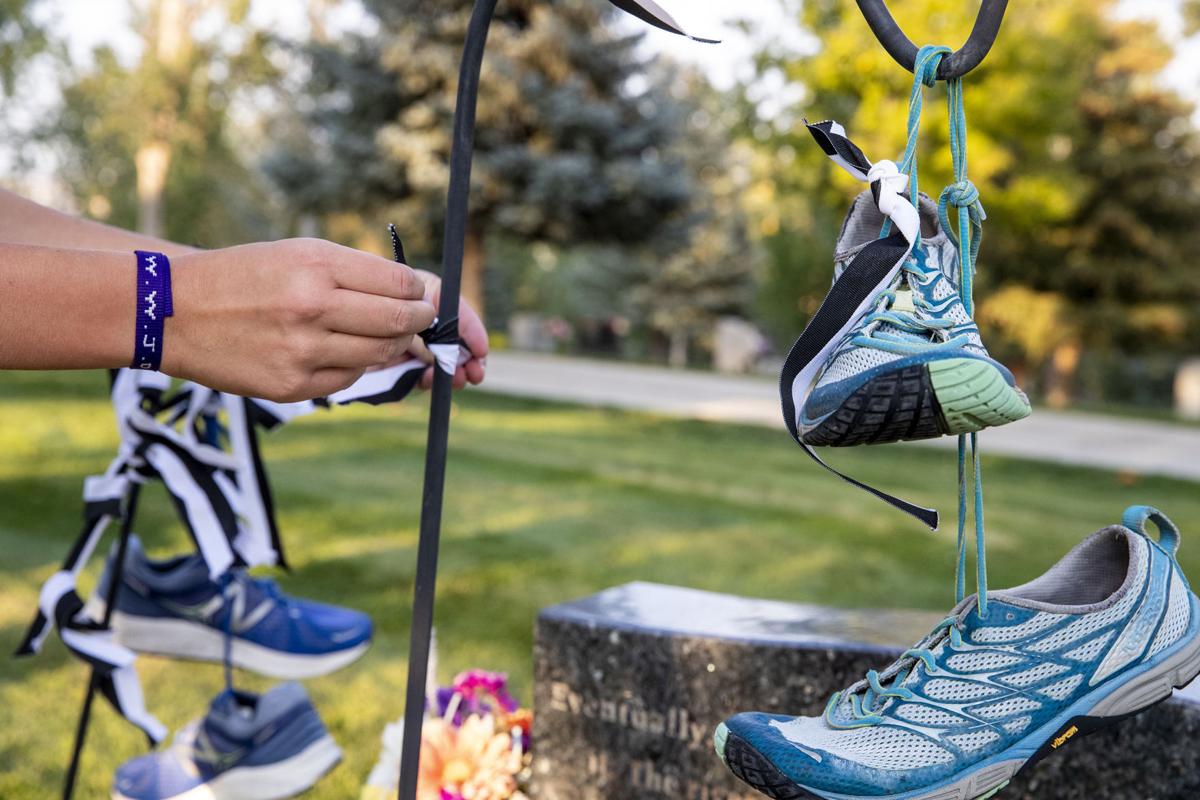 A runner ties a ribbon to Morgan McLeland’s grave while running in the Memory of the 8 race Thursday in Mount Pisgah Cemetery.

Runners depart the starting line during Thursday evening’s Memory of the 8 run along 4J Road. The run commemorates eight University of Wyoming cross-country runners who were killed on Sept. 16, 2001, including Gillette’s Morgan McLeland.

Trinitie Jenkins competes in the Memory of the 8 race with miniature horse, “Jingle”, by her side as they ran through Mount Pisgah Cemetery Thursday evening.

Gov. Mark Gordon hugs Debbie McLeland, mother of Morgan McLeland, who was killed along with seven of his teammates by a drunken driver on Sept. 16, 2001, during the 20th anniversary Memory of the 8 run Thursday evening.

Runners tie ribbons to the grave of Morgan McLeland while running through Mount Pisgah Cemetery during Thursday’s Memory of the 8 race.

Mitchell Clark races across the finish line in the kid’s race during Thursday’s Memory of the 8 gathering.

A runner ties a ribbon to Morgan McLeland’s grave while running in the Memory of the 8 race Thursday in Mount Pisgah Cemetery.

Kaylee McLeland never had the chance to meet her uncle.

Kaylee, 16, is a junior at Thunder Basin High School. She was wearing her Bolts’ cross-country uniform Thursday before the 11th annual Memory of the 8 run began.

This year’s run marked the 20th anniversary of the drunken driving crash that killed eight University of Wyoming cross-country student-athletes in 2001. One of the runners killed was Campbell County High School graduate Morgan McLeland.

In the crash, a drunken driver collided with the vehicle carrying eight UW athletes as they returned to Laramie from Fort Collins, Colorado. The crash took place just five days after the 9/11 terrorist attacks.

Morgan is Kaylee’s uncle. Even though Morgan died before she was born, Sept. 16 is always a day Kaylee and her family anticipate.

“I like the run because I always get to hear all these cool memories about my uncle and all of the other runners,” Kaylee said. “It makes me feel kind of closer to them and it’s just really cool to see all these people here supporting driving safe and staying sober.”

The McLelands have had a family tradition to always eat hamburgers for lunch on Sept. 16, Kaylee said. It was Morgan’s favorite meal.

The lunchtime tradition is just one example of making a once-tragic day more of a day of celebration. The Memory of the 8 run has been a big part in bringing the community together to celebrate the lives and memories of the eight lives lost 20 years ago.

Thursday’s run had approximately 350 runners and many other guests hanging out in the parking lot of the M&K Oil Co. One of those guests was Wyoming Gov. Mark Gordon.

“I think anytime we can remember the tragedy that befell these eight (men) is unbelievably important,” Gordon said. “We’ve lost too many lives senselessly for people driving while they’re impaired.”

Gordon met with friends and family members of the eight runners who died in the crash. Morgan’s mother, Debbie McLeland, joined Gordon before the race to share a message with the crowd.

“The promise of these kids that was lost that morning on that highway is heartbreaking for all of us,” Debbie said to the crowd. “We miss them every day and I know the other families miss their family members just as much as we miss Morgan.

“Every single one of them was a champion.”

Debbie shared a few laughs with the crowd before turning her attention to the main purpose of the Memory of the 8. The event was created 11 years ago to raise awareness to the dangers of drunken driving.

Each runner who registered for the event was given a sticker to commemorate the Memory of the 8. Debbie asked the crowd to apply the sticker to their cars after the race as a reminder to never drink and drive.

“Every time you get in that car, I want you to remember those kids that died and to remember to drive sober,” Debbie said. “If you’ve put that on your car you’ve made me a promise, and it’s about integrity. ‘I’m going to put this on my car, and I will not drive impaired.’

“That’s the pledge you’re making to me. I can’t see or enforce it and there’s nothing I can do. But you made me that promise. Please keep that in your mind.”

A moment of silence was called before the race’s starting gun was fired. Before the 350 or so runners could start the 8-mile race around Gillette, Debbie left them with a message she’s carried with her for 20 years now.

While the eight runners may no longer be with us, they will never be forgotten, she said.

Jason Delaney was Morgan’s roommate and cross-country teammate in Laramie in 2001. Delaney joined former UW cross-country coach Jim Sanchez at this year’s Memory of the 8 run to celebrate the 20th anniversary.

“On my way over here I was thinking about how grateful I am to have had the opportunity to coach Morgan,” Hess said. “You can take Morgan and multiple it times eight because that’s what we have here in terms of all the individuals.

“I know they were all quality athletes but I cherish the fact that I got to know them and I got to coach them and that’s what I always hold onto.”

Jim Sarvey was at the event with his Twin Spruce Junior High cross-country team. Not only was Sarvey there to show his support for the community as a coach, he was also showing support for one of his best friends during his high school days.

Sarvey and Morgan were best friends at Campbell County more than 20 years ago.

“Morgan was one of my dear friends and he was such a tremendous and awesome guy,” Sarvey said. “He was a role model and it’s good for these kids to see his legacy and to see how he left behind what he worked for all of those years.”

Sarvey’s favorite part of the annual event is seeing how such a tragic event has brought the entire state together to remember the eight runners.

Keeping impaired driving on the forefront

Sgt. Duane Ellis has been the state impaired driving program coordinator since 2017. He attended this year’s Memory of the 8 run to show his support for the cause as well as to continue to raise awareness for drunken driving.

“Twenty years ago, eight young men lost their lives,” Ellis said. “That event was significant enough that the Legislature the next year lowered the (blood alcohol content) from 0.10 to 0.08.

“It’s very unfortunate that tragic events such as the loss of eight young men facilitate that change but it’s one of those things where that was a significant change.”

Rich Adriaens is the facilitator for the governor’s council on impaired driving. He was the chief of police for the Gillette Police Department from 2005 to 2010 before moving to Sheridan.

Adriaens also attended Thursday’s Memory of the 8 run. Getting the community involved in raising awareness is the first step in encouraging people not to drink and drive, he said.

“It’s always great to bring awareness,” Adriaens said. “Awareness unfortunately sometimes comes from something tragic like this and we lost eight wonderful human beings that year.”

Runners began the run down South 4J Road shortly after Gordon and Debbie’s presentation to the crowd. The course stretched 8 miles across downtown Gillette, with each mile dedicated to the memory of each of the runners killed.

The 20-year anniversary of the death of her uncle felt special this year, Kaylee said. This year she felt the day was less about sadness and grief and more about the celebration of life and the dedication to spread a meaningful message.

Kaylee never really liked running. Her father, Nathan McLeland, who is Morgan’s brother, encouraged her to try cross-country about the time she was in junior high.

While it’s still not her favorite thing to do, Kaylee admits that running has grown on her through the years.

Like her eye color or the height she’ll one day grow to, enjoying a nice relaxing run on a sunny Gillette afternoon is something that seems to run in the family.