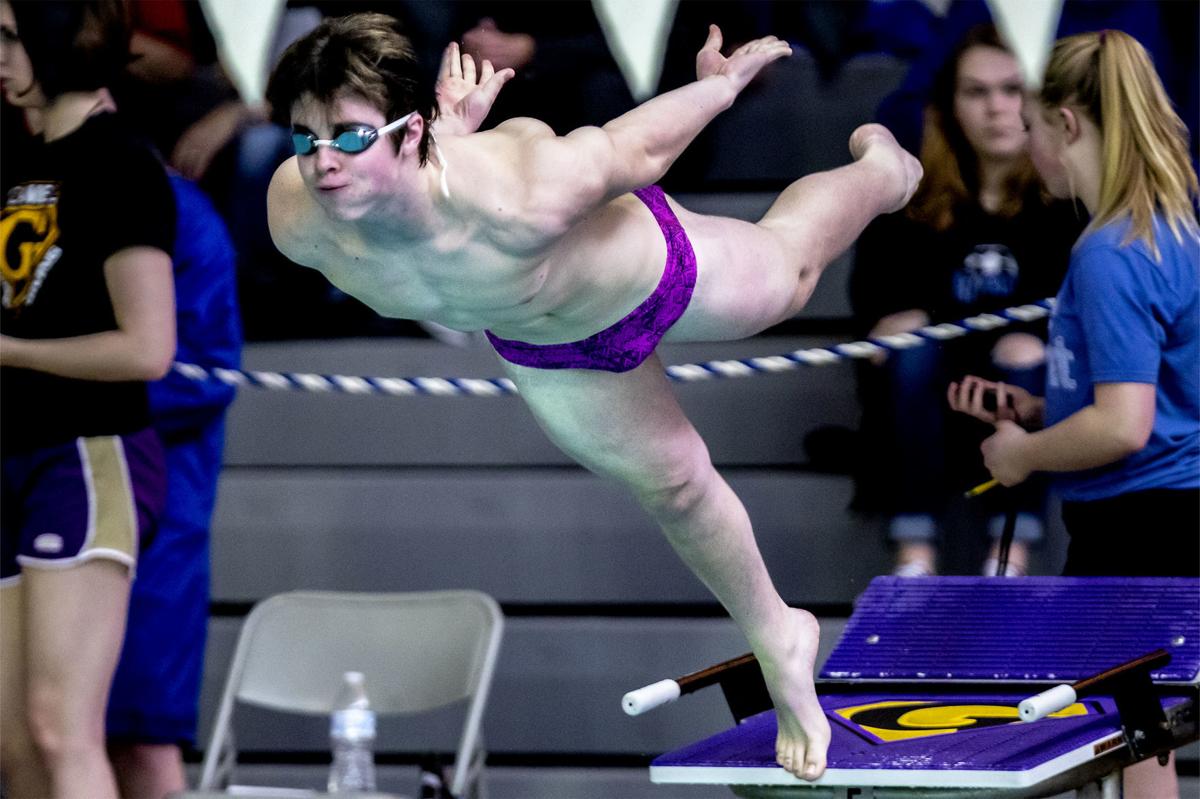 The Bolts’ Caleb Carsrud leaps off the blocks to compete in the finals of the 100 yard freestyle at the East Conference Swimming Championships Meet on Feb. 8. 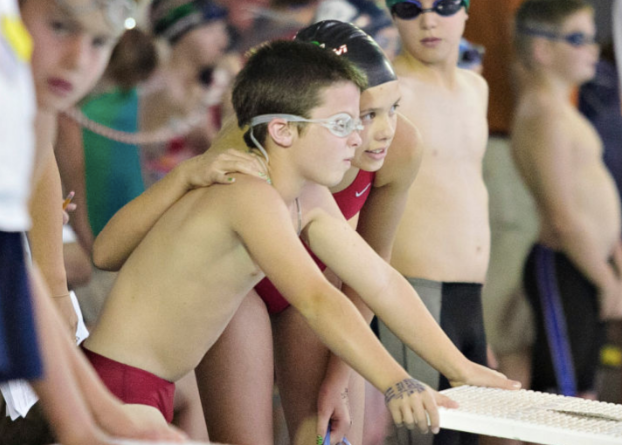 A young Caleb Carsrud, front, gets ready for a race, as his older sister Sani Carsrud gives him some encouragement. 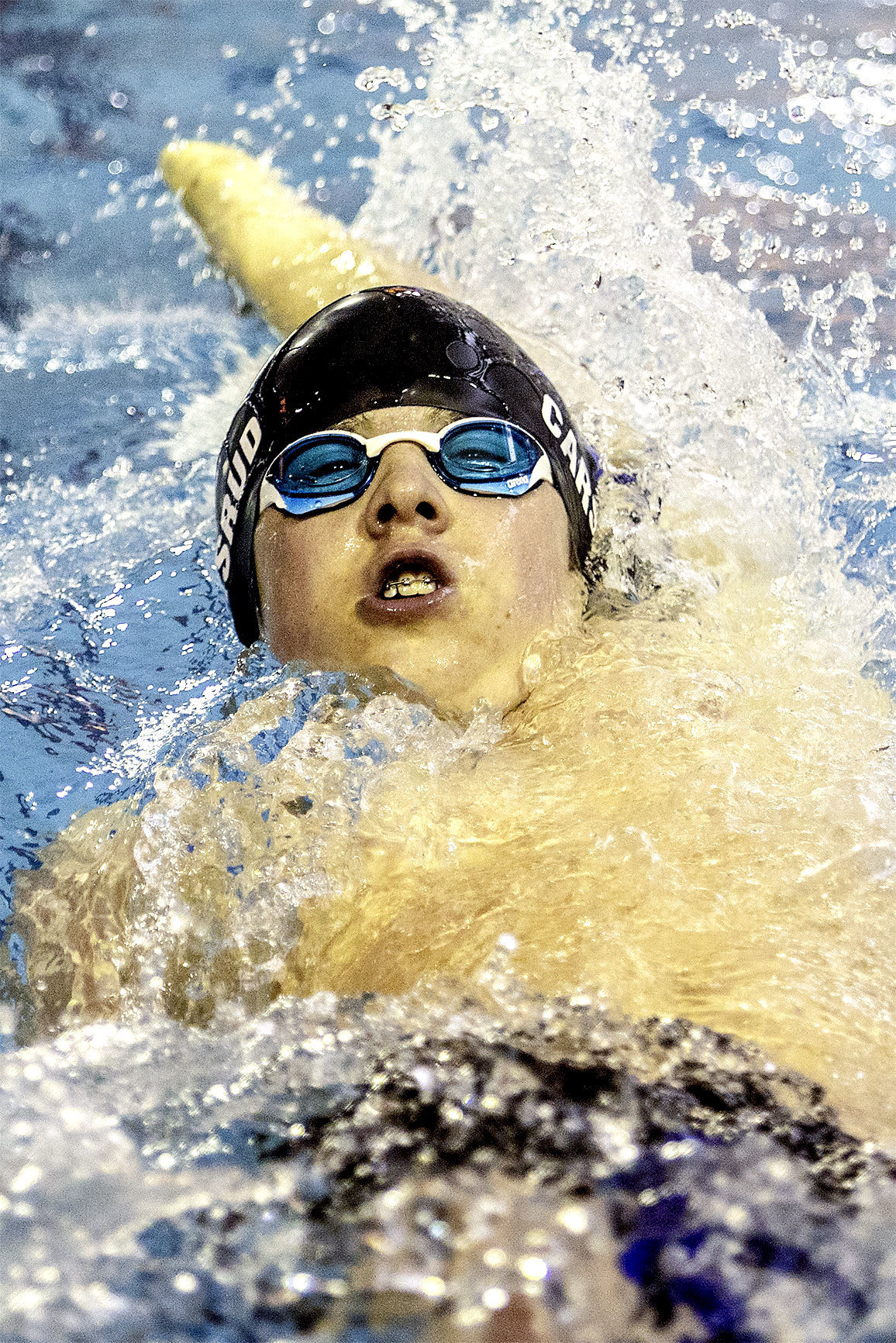 The Bolts’ Caleb Carsrud backstrokes through the water in the boys 200 yard individual medley at the Campbell County Aquatic Center on Friday, Feb. 15, 2019.

The Bolts’ Caleb Carsrud leaps off the blocks to compete in the finals of the 100 yard freestyle at the East Conference Swimming Championships Meet on Feb. 8.

A young Caleb Carsrud, front, gets ready for a race, as his older sister Sani Carsrud gives him some encouragement.

The Bolts’ Caleb Carsrud backstrokes through the water in the boys 200 yard individual medley at the Campbell County Aquatic Center on Friday, Feb. 15, 2019.

Swimming lessons are usually the first step in the long careers of high school swimmers. But Caleb Carsrud never needed the help of an instructor to learn his sport.

He had his three older sisters for that.

“I skipped swim lessons because my sisters taught me how to swim,” he said.

Carsrud, a junior at Thunder Basin High School and the youngest of four siblings, has always had a high standard to meet. His sisters taught him how when he was 3 or 4 years old and then provided top-notch examples of success in the pool.

Emma Carsrud was a state runner-up and Katie Carsrud was a top-five state placer before they graduated in 2016 from Campbell County High School. Caleb’s sister Sani Carsrud was the closest to him in age and also the most decorated prep swimmer in the family.

Caleb grew up as a proud little brother as all three of his sisters were on state champion teams at CCHS. He still remembers watching the Camels getting into a fire truck when they returned to Gillette and parading around town.

“They’d all load up and they’d go cruise around town and we would follow them,” Caleb said. “It was so exciting to see them up there.”

Caleb’s family lived outside Gillette for much of his childhood. Instead of riding bikes around town with the boys, he would hang out with his three sisters.

He didn’t have a problem with that, though. The four would hike in the mountains together, swim in the creeks and lakes and help with branding calves at their grandfather’s ranch.

“Before we moved to Gillette, we lived out in the country away from a lot of people,” Caleb said. “We were all really close and would all hang out. We were like each other’s best friends, usually.”

“She kind of took it upon herself to be my brother, she used to say, because she thought I needed one,” Caleb said. “She would always fight with me and try to beat me up and make me tougher. So, it was definitely a little different (growing up with sisters).”

The largest common denominator between the siblings was the pool. Caleb grew up watching his sisters compete and as soon as he was old enough to race himself, they were right there to help him.

Fortunately for Caleb, each of his sisters specialized in a different event. If he had any questions about the breaststroke, he would ask Katie. For the butterfly, he’d go to Emma. And for anything freestyle, he’d ask Sani.

“They all just kind of directed me to where I needed to be,” Caleb said. “They were all just super helpful. They’d all been there and knew what I was going through.”

As Caleb grew older, his sisters started to push him in a different way. They were no longer there just to lend a helping hand, but were more of a motivating force.

“Sani, especially, she just kind of took off and she just got so fast,” Caleb said. “Because she was a lot faster than me, it started out with her helping me.

“Then once I got some traction and started going a little faster I started going, ‘I don’t need your help, I’m going to beat you.’ It just progressed into a competition.”

Since he is four years younger than Sani, it took awhile for Caleb to catch up. When he got to high school and watched her win her fifth and sixth individual titles, he decided to use her times as his goals.

He still hadn’t caught her at the start of his sophomore year, something Caleb said became a little frustrating.

Caleb finally passed Sani’s freestyle times toward the end of his sophomore season, but the competition between the two didn’t end there. Sani now swims at the University of Wyoming and as she improves, Caleb’s goals also increase.”

“She swam at conference a couple of days ago and she was going for a 50, and that’s my time,” Caleb said. “I was like, ‘I’ve got to go faster.’ That’s been my biggest motivation, probably, is her.”

His time to shine

The 4A state boys swimming and diving meet is this weekend, and Caleb has a chance to add some more hardware to the Carsrud collection.

He was a state finalist in the 100-meter freestyle last season, placing sixth, and has his sights set on bronze this weekend.

“I really want to edge out some of those guys that beat me last year and get into the top three,” Caleb said.

Caleb has made strides this season and said he feels “so much stronger” compared to a year ago. His best time in the 100 free as a sophomore was 50.66 seconds. During the finals at this season’s conference meet, he clocked in at 50.18, and that was before the Bolts had gone into their pre-state rest period.

“I feel like I’m just so much farther ahead of where I was. I’m actually shocked,” Caleb said.

The lone swimmer who beat Caleb at conference, in both the 100 and 50 freestyle races, was Casper-Kelly Walsh’s Nick Allen. Third place is “a big goal” for him, but beating Allen is also high on the list.

Caleb is one of the few TBHS swimmers who has experience at the state meet, but it’ll be different for him this year. With state champs Gunnar Poley and JR Albers graduating last year, Caleb is now a team captain and a leader for the Bolts.

He has come a long way from the boy who took swim lessons from his sisters, and he’s no longer the younger brother watching his sisters in their state title parade. For Caleb Carsrud, the parade’s about to begin.