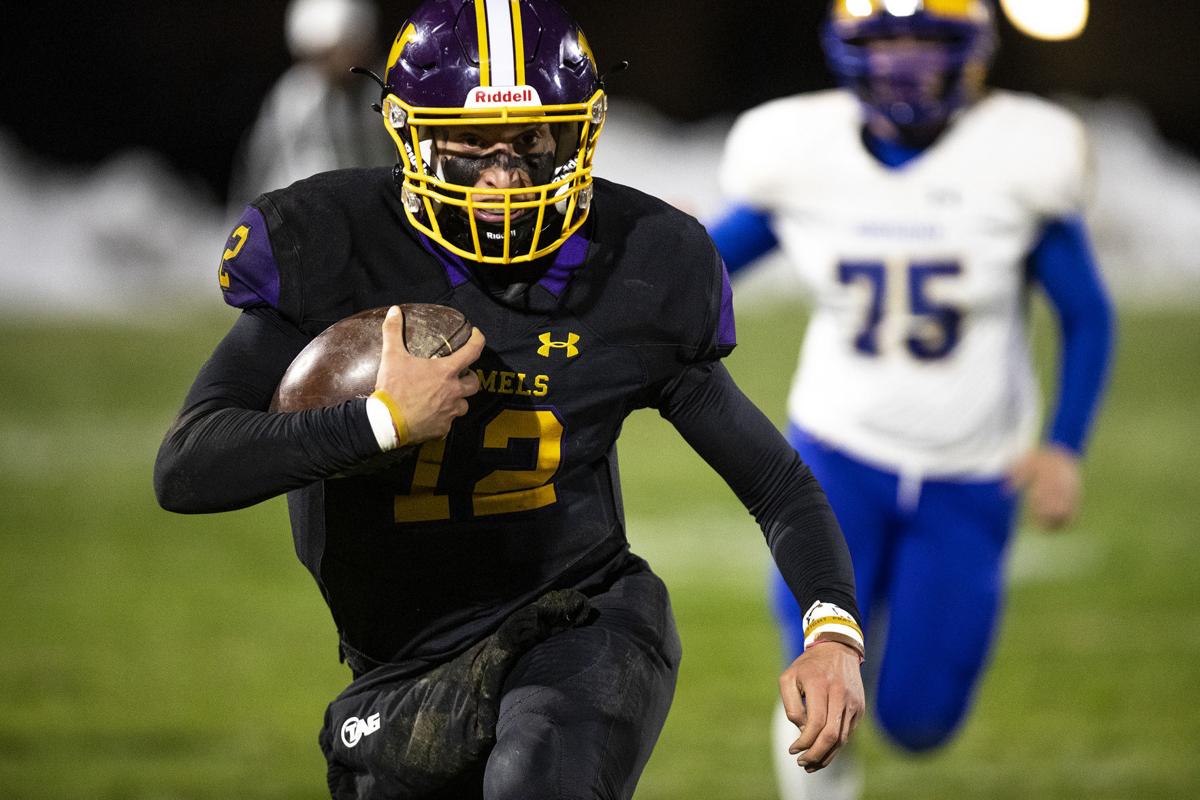 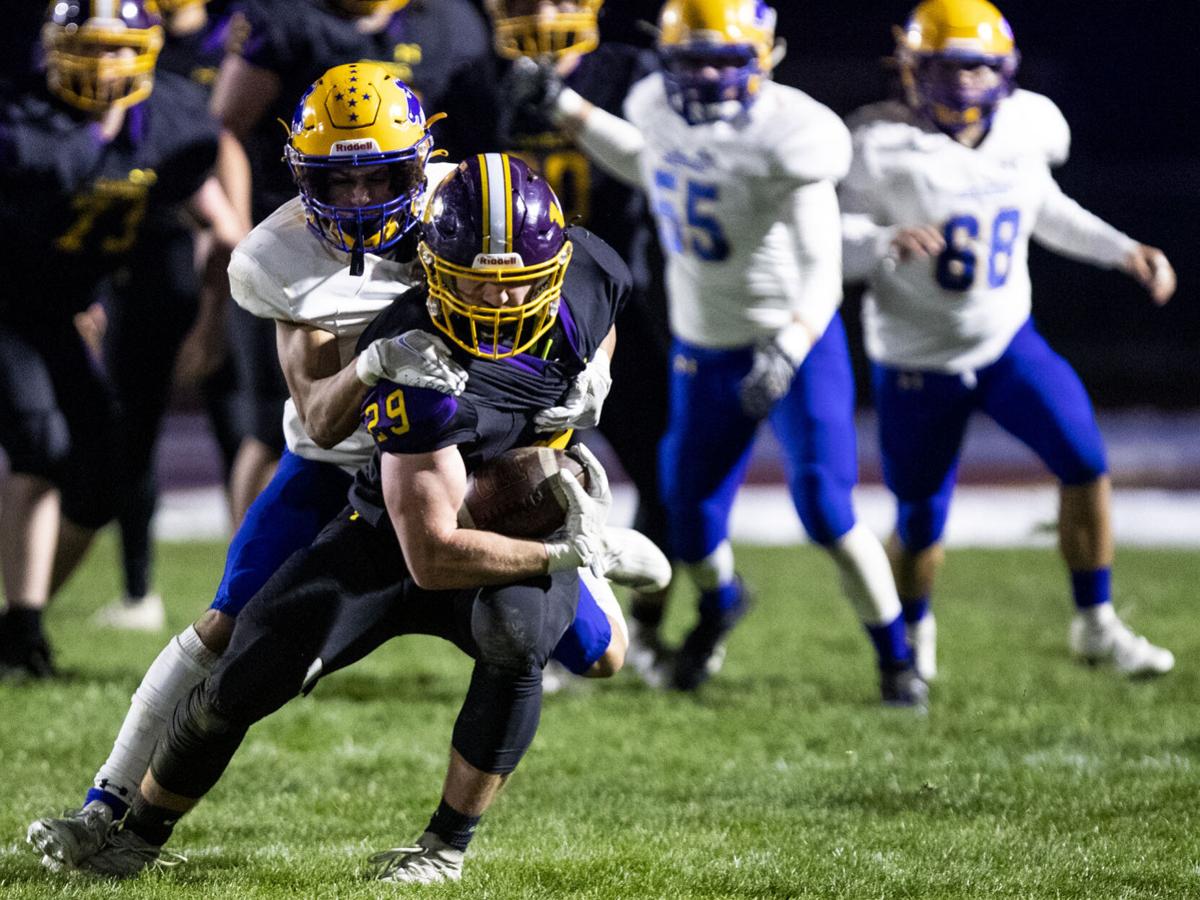 On the field, Drube has spent most of his freshman season splitting snaps with sophomore Aidan Dorr at the quarterback position. In a typical game, Dorr would play under center for the majority of the first half and Drube would finish out the game in the second half.

Off the field, the 15-year-old has faced more adversity than most kids his age. Drube lost his father, Kirby Drube, on Oct. 6 after an extensive battle with complications from COVID-19.

Kirby spent several weeks at a hospital in Colorado fighting complications from the virus. Back in Gillette, sports teams from both Thunder Basin and Campbell County supported the cause with the mantra “Drube Strong.”

Seeing the way his school and the community as a whole have supported his family has been a big boost for Mason and his family over the last couple of weeks, he said.

“It’s been tough thinking about it,” Mason said. “But this community and this football team has supported us and it’s been helping a lot.”

After Kirby’s death, the mantra remains, but the focus now has shifted to supporting Mason and the rest of the Drube family.

“The kids have been great,” CCHS coach Andrew Rose said. “I can’t think of a worse thing to happen to a kid, but it’s really shown that we have something different right now that we haven’t had in the past. It’s that true, cliché brotherhood.

Three days after Kirby’s death, the Camels traveled to Casper to face Natrona County. Dorr was Campbell County’s only available quarterback with Drube out for personal reasons.

In the first quarter, Dorr went down with a broken ankle on a quarterback scramble. He had surgery last week and will likely miss the rest of his sophomore season, Rose said.

Drube returned to practice last week but Rose wasn’t sure if he was ready to play leading up to the Camels’ home matchup with Sheridan on Friday. But Mason lived up to the “Drube Strong” mantra, playing in his first game since the death of his father a week earlier.

One of his biggest supporters during his preparation for Sheridan was his main competition for snaps. But Mason’s relationship with Dorr is less about competition and more about friendship and brotherhood, he said.

“Aidan’s been there for me the whole way,” Mason said. “He’s been here right by my side helping me and giving me advice the whole way through.”

Dorr has shown his own maturity and leadership qualities after his injury. He returned to the team the same week as his surgery to support his Camel teammates from the sidelines, Rose said.

“He came back the day after his surgery,” Rose said. “At no point has he just hung up his cleats. He’s still invested. He’s still 100% invested. You cannot at all question that kid’s integrity and loyalty. He’s irreplaceable in that sense.”

While the Camels lost to the Broncs 38-7 in the team’s final home game of the season Friday, it wasn’t the final score that got the attention of Rose. It was Mason’s ability to step up in the face of adversity and lead his teammates both on and off the field.

“He’s a positive kid and he probably spends almost as much time watching film as I do. He’s got a lot of characteristics that are almost impossible to coach. His leadership attitude, his competitiveness that he has and he just doesn’t have a quit in him.”

Mason’s goal now as the official starting quarterback for the Camels (3-5) is to finish the regular season with a win over Kelly Walsh (3-5) on Friday. A win against the Trojans would give Mason and his teammates confidence going into the team’s first playoff game since 2019.

“We just need to show some fight against this Kelly Walsh team,” Mason said. “Getting a win going into playoffs is our main goal now.”

Rose has full confidence in the freshman quarterback leading his team into the playoffs. The key for Mason will be to limit mistakes and to trust not only himself but his teammates around him, Rose said.

“I’m super excited for him to not only have this chance and this opportunity as a freshman, but also to be able to set that tone for the rest of the season,” Rose said. “We just have to keep rolling and keep making strides.”

On a personal level, Mason wants to do everything he can do to improve as a player. That includes listening to his coaching and, of course, making his dad proud.

Win or lose, Mason knows he has the support of the Gillette community behind him.

“It just means a lot and shows how much my dad meant to this community,” Drube said. “I’m proud of him for that. It will always be awesome to see how much this community supports us and that just helps me a lot.”

Campbell County will play Kelly Walsh at 6 p.m. Friday. The winner will claim the No. 6 seed in the playoffs while the loser takes the No. 7 seed, according to Wyoming-football.com.

The Campbell County High School football team dropped its final home game of the season 38-7 to Sheridan on Friday night.

The Broncs went into the matchup ranked No. 2 in the WyoPrep.com coaches and media football rankings and improved to 7-1 on the season. The Camels fell to 3-5.

Campbell County freshman Mason Drube got the start at quarterback after sophomore Aidan Dorr broke his ankle during last week's 35-2 loss to Natrona County. Drube and Dorr were splitting snaps for the majority of the season but Drube stepped up for the full workload for the Camels on Friday.

Sheridan took an early 7-0 lead after a Colson Coon 4-yard touchdown run early in the first quarter. Coon's touchdown would be the only points scored in the opening quarter after the Camel defense stepped up to force a turnover on downs on Sheridan's next possession.

Campbell County's only points of the game came on a 50-yard touchdown strike from Drube to Brady Tompkins with 14 seconds left in the first half. The score made it 17-7 going into the locker room at halftime.

After staying within striking distance of one of the best teams in Class 4A during the first half, the Camels weren't able to find the end zone again versus the Broncs' stingy defense.

Sheridan found the end zone one last time on a 57-yard touchdown run with 3:29 left in the game to bring the game to its final score of 38-7.