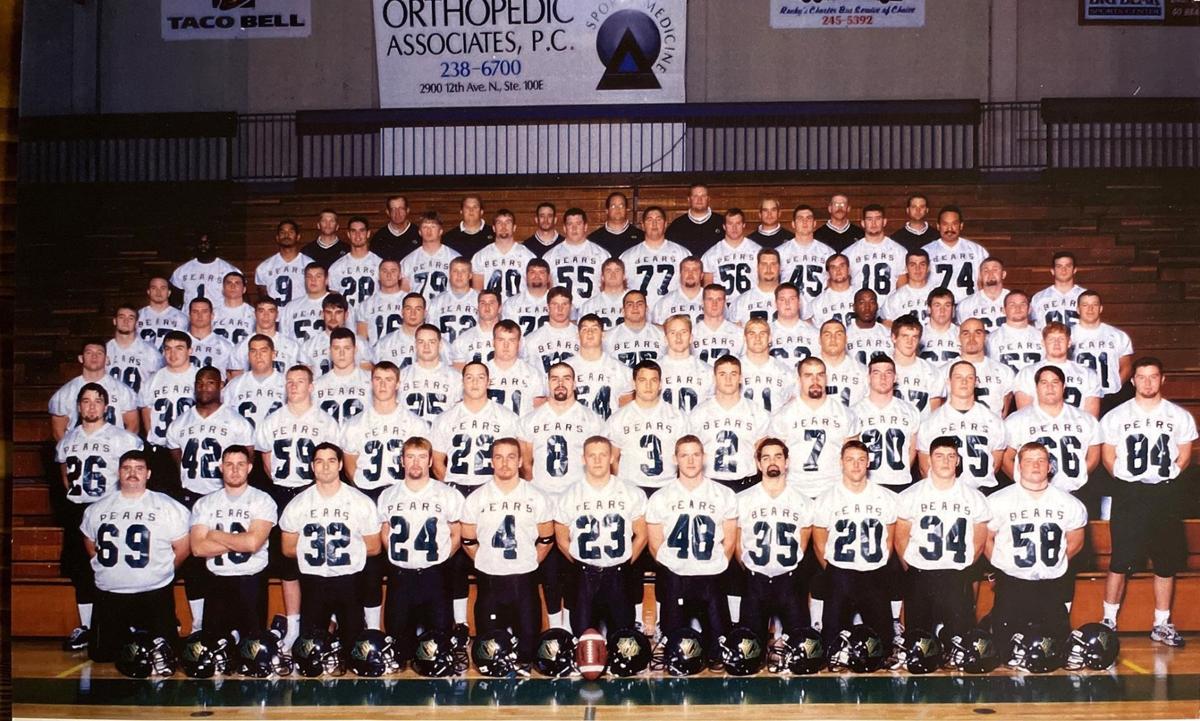 Jimmy Hilliard and Luke Twibell were a part of the 1998 Rocky Mountain College football team that won the Frontier Conference Championship. 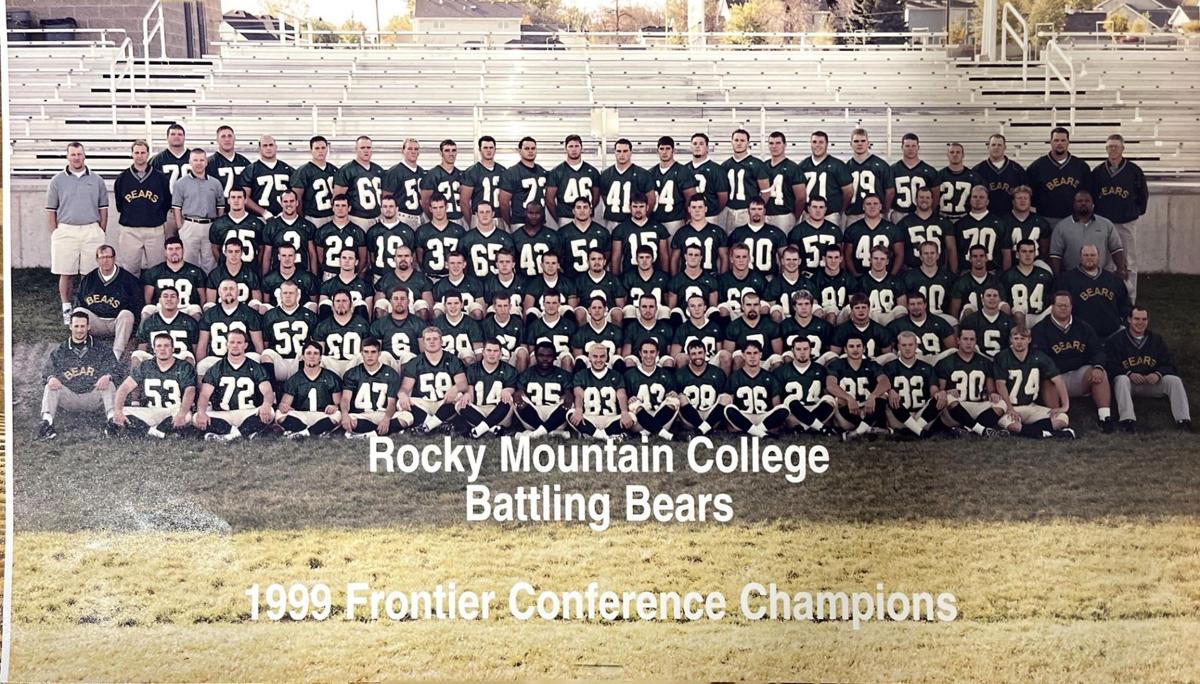 The 1999 Rocky Mountain College football team won its second consecutive Frontier Conference Championship. Both the 1998 and 1999 teams will be inducted into the RMC Clara Klindt Athletic Hall of Fame. Gillette residents Jimmy Hilliard and Luke Twibell were a part of the team.

Jimmy Hilliard and Luke Twibell were a part of the 1998 Rocky Mountain College football team that won the Frontier Conference Championship.

The 1999 Rocky Mountain College football team won its second consecutive Frontier Conference Championship. Both the 1998 and 1999 teams will be inducted into the RMC Clara Klindt Athletic Hall of Fame. Gillette residents Jimmy Hilliard and Luke Twibell were a part of the team.

More than 20 years later, both men will be inducted into the RMC Clara Klindt Athletic Hall of Fame on Saturday as part of the championship teams. Both the 1998 and 1999 teams were inducted in the class of 2021.

Hilliard was an offensive coordinator for the Battlin’ Bears of Billings, Montana, from 1997 to 2000. Twibell was a four-time all-conference linebacker for RMC from 1996 to 1999.

The 1998 and 1999 football teams will be inducted along with with three individual members, including Dr. Dave Shenton, Devin Uskoski and Mitch Holst.

Holst has been a high school basketball coach at Campbell County High School since 1987.

The three Gillette men and the rest of the inductees will be honored during halftime of RMC’s homecoming game Saturday against Southern Oregon.

Hilliard’s college football career started as a wide receiver at the University of Montana Western in Dillon, where he played from 1988 to 1991.

He went on to student teach in 1992 before returning to Dillon as a graduate assistant coach from 1993 to 1995. Hilliard already has been inducted into the UMW Bulldog Athletic Hall of Fame as a member of the 1994 football team that won the Frontier Conference.

Hilliard was hired as a coordinator for RMC’s football team in 1997. He remembers his time in Billings as the perfect opportunity for a young coach to gain valuable experience at the college level.

“It was a great situation for me,” Hilliard said. “It was just this web of people that wanted to learn about the game and weren’t afraid to ask questions and to seek out whatever it is they wanted to learn. That worked out really good.”

Hilliard coached alongside Jeff Lewis, who was inducted into the school’s Hall of Fame in 2007. Lewis resigned from RMC in 2000 to take an assistant coaching job for the Amsterdam Admirals of NFL Europe, according to the Billings Gazette.

“It was just a no-brainer for us to hook up,” Hilliard said. “He did the (offensive) line stuff and I was the quarterbacks and wide receivers guy, and we coordinated and worked on the offense together because that’s the best way to do it.

“You get input from all your coaches and you all do it together so it’s not just on one person. It’s a melting pot of knowledge and information.”

The bond and understanding between Hilliard and Lewis led to a historic run for RMC right before the turn of the century. The RMC football team finished 9-1 in 1998 and 9-3 in 1999.

Together the two teams produced 17 NAIA All-Americans, Hilliard said. RMC led the nation in passing offensive during both seasons.

Hilliard moved to Gillette in 2001 and began coaching football at Sage Valley Junior High the same year. He coached the Eagles’ football team for 13 years before joining the varsity coaching staff at Campbell County High School.

Hilliard was an assistant coach for the Camels for four seasons. Outside of football season, he coached track and field for 18 years.

“When I was a young college coach, football was all about winning,” Hilliard said. “I believe that I’m a better man and coach today after spending the past 20 years teaching and coaching in the Campbell County School District.

“My experiences in Gillette have taught me that building positive relationships with kids and having a positive impact on their lives is a better feeling than winning any game.”

Hilliard’s experience in Billings on Saturday will be especially unique. Not only is he being honored for his coaching efforts at RMC, he’s being inducted at halftime of both of his sons’ football game.

Tyler was a redshirt freshman in 2018 when RMC won the Frontier Conference Championship for the first time since Jimmy’s team in 1999. Through 18 career games, Tyler has 19 solo tackles, 19 assisted tackles, 2.5 tackles for a loss and two pass breakups.

Along with having his sons by his side during the ceremony, Hilliard also looks forward to joining Holst at center stage. Side by side, Holst and Hilliard coached Campbell County’s football team for four seasons.

Holst graduated from RMC in Montana in 1986, where he played basketball and football. He was a member of the 1984 Frontier Conference Championship football team.

Being recognized for his efforts as a coach so many years later is a testament to how good RMC’s football team was in 1998 and 1999, Hilliard said.

“It’s a good validation of our program and our student-athletes and the young men that they were back then and what they are now,” he said. “It shows how much time and commitment we put in to not only try to win football games, but also how deep our relationships were with our players.”

Twibell honored to be inducted with team

The Battlin’ Bears’ conference championships came during Twibell’s junior and senior seasons at RMC. As he looks back, he thinks there would have been no better way to cap off his career in Billings.

Twibell graduated from Sheridan High School in 1995. He so enjoyed his visit with the RMC coaching staff during his senior year that he decided to play in Billings at college.

“We had a lot of great players through those years and it’s just kind of surreal but it’s also pretty cool,” Twibell said.

After graduating from RMC in 2000, Twibell stuck with football for a handful of years. He played for the Billings Outlaws, a professional indoor football team.

In 2006, Twibell moved to Gillette to work in the coal mines. He’s worked at the Black Thunder mine ever since.

Twibell is excited to make the trip back to Billings to reunite with his former teammates and coaches. Starting Saturday, Twibell will be remembered as a crucial part of two of the best football teams in school history.