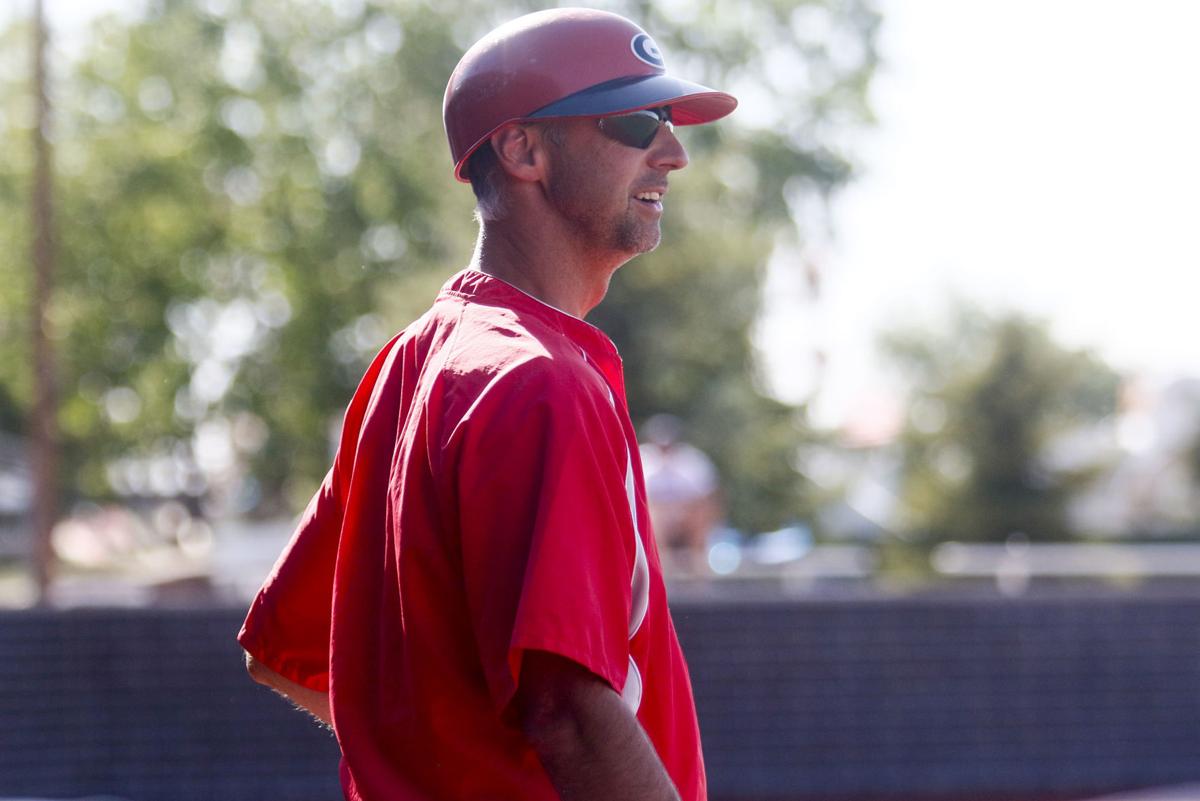 Roughrider head coach Nate Perleberg takes a peek out toward his defense during a home game against Sheridan on Thursday at Hladky Memorial Stadium. Perleberg won his 800th career game against the Troopers. 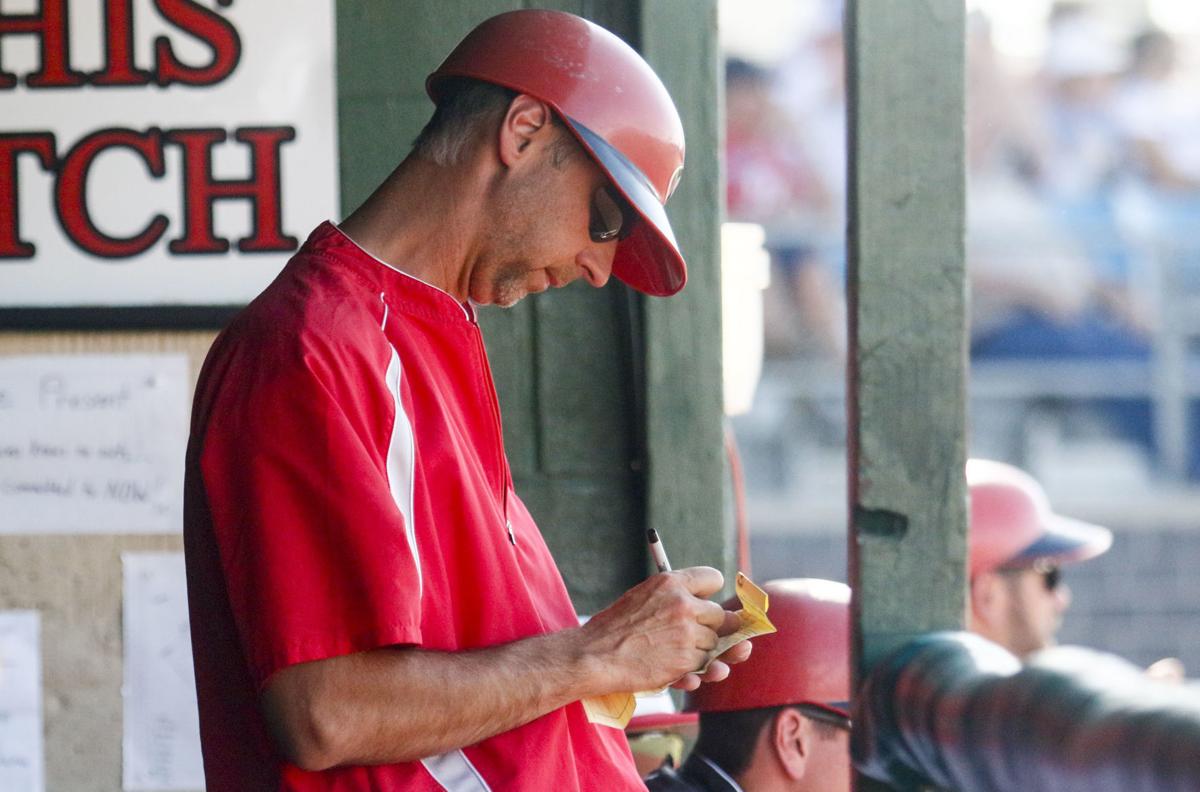 Roughrider coach Nate Perleberg makes some changes to the lineup card during a home game against Sheridan on Thursday at Hladky Memorial Stadium. Perleberg won his 800th career game against the Troopers. 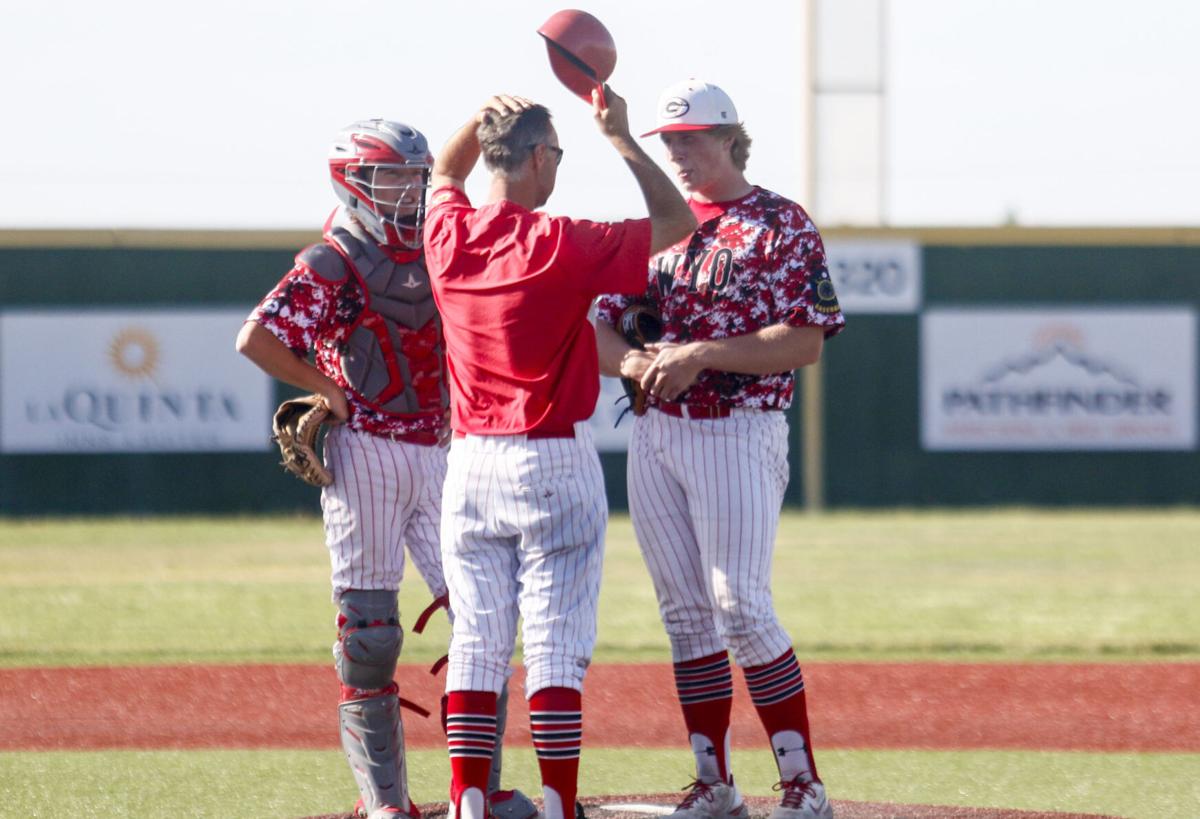 Roughrider head coach Nate Perleberg takes a peek out toward his defense during a home game against Sheridan on Thursday at Hladky Memorial Stadium. Perleberg won his 800th career game against the Troopers.

Roughrider coach Nate Perleberg makes some changes to the lineup card during a home game against Sheridan on Thursday at Hladky Memorial Stadium. Perleberg won his 800th career game against the Troopers.

Nate Perleberg has won a lot over the course of his 16 years coaching the Gillette American Legion Post 42 baseball team.

Halfway through June, the Roughriders have reached the grind of a summer schedule that sees them play five to 10 games a week. It’s easy to gloss over wins during the regular season, but that wasn’t the case Thursday night at Hladky Memorial Stadium.

Gillette was hosting Sheridan for a conference doubleheader. The Troopers came away with a 9-0 win in the first game, but the Roughriders responded strong in the nightcap.

The Roughriders were up 8-4 in the top of the seventh when junior Jason Fink took the mound to close out the game for the home squad. Battling winds gusting up to 45 mph, Fink got two quick outs before a runner reached on an error.

With Sheridan down to its last out, Fink struck the batter out on four pitches to seal Gillette’s first conference win of the season.

Sealing the win sparked a Post 42 celebration that began near the pitching mound. Those watching would think the team had just won a state championship. While earning the first conference win was nice, there was another cause for celebration.

The 8-4 win over Sheridan was Perleberg’s 800th career win and bumped his career record to 800-393 (.671). With a Ferris wheel at the Roughrider Carnival swinging clockwise in the background, the players celebrated their coach’s historic milestone outside the home dugout.

A milestone for Wyo. baseball

Ryan Iliff has nothing but fond memories playing for Perleberg.

Iliff graduated from Campbell County High School in 2007 and played for the Roughriders from 2005-08. In his final season as a college-returner, Iliff pitched his team to victory in the state championship game against Cheyenne Post 6 for Perleberg’s first title in 2008.

Perleberg took over the Roughrider program two years earlier during Iliff’s second season playing varsity. The new coach made an immediate impact that boosted his player and program to the next level, Iliff said.

“Right away, in 2006 and 2007, we had very talented teams but he kind of got us over the hump and really turned the corner for the program,” Iliff said. “He had a lot of pride on how he did things and he was a caring person and he wanted to win.

“He definitely got the best out of all of us.”

Perleberg has won plenty and has created a program that can give the Cheyenne Post 6 juggernaut a run every season.

But Iliff, like many others, knows it’s what he does for his players off the field that makes Perleberg such a successful coach.

Winning off the field

Steve Laakso has been a member of the Post 42 American Legion Baseball Board since 2010 and president since 2014.

Having such a successful baseball program is an asset to the Gillette community, he said. Laakso compared the Roughriders to the success basketball teams have found over the years at Campbell County and Thunder Basin high schools.

“He’s created a winning culture and it’s just a great team atmosphere,” Laakso said. “He gets the kids to compete and to believe in themselves, so the kids go out there and they know they can win.”

Having a solid record is an added bonus to any baseball season. But that’s not what the program is all about, Laakso said.

“It’s not just about the wins and losses on the field. Nate is growing these boys and turning them into young men,” Laakso said. “He’s teaching them how to be successful beyond the baseball field, and that’s our most important goal out of all of it.”

Since taking over the program in 2006, Perleberg has had 55 players go on to play college baseball.

Iliff was one of those players to advance to the next level. He played four years of college baseball at the University of Jamestown in North Dakota from 2008-11.

It was Perleberg who helped create the opportunity for him to play college baseball, Iliff said.

“Being from Gillette, no one came and recruited us. There weren’t colleges coming to watch us play,” Iliff said. “He was getting us in the right tournaments so we could actually be seen and he was helping me reach out to coaches and send emails.

“He played a huge role in having our guys be seen and also having them be ready to play college baseball.”

After graduating in 2011, Iliff was hired as an assistant coach for the Jimmies in 2012 and has been there ever since. From 2012-17, Iliff coached the college baseball season in Jamestown before returning to Gillette to assist Perleberg on the Roughriders for the rest of the summers.

While he no longer coaches in Gillette, Iliff never hesitates to recommend a Roughrider recruit to the UJ coaching staff. Talent is always what sticks out in the recruitment process, but good character can sometimes be the difference for a recruit, Iliff said.

“We know that we can go get a Gillette guy and they’ll be prepared to play right away because they do things the right way,” Iliff said.

Perleberg doesn’t worry too much about records or career stats. All he cares about is winning the next game.

“All I was thinking about was trying to earn the split,” Perleberg said about Thursday night’s win. “It made it a little bit better that it was Sheridan to get that 800th (win), but it really wasn’t going through my mind at all.”

State championships are the main motivator for Perleberg and he preaches that to year in and year out. But at the end of the day, win or lose, he wants all his players to have no regrets when their American Legion careers come to an end.

“The culture is the No. 1 thing in our program,” Perleberg said. “The character of our players in our program means a lot more to me than all the wins and, honestly, baseball in general.

“Baseball is really just a teaching point for life.”

“I always say, ‘The players win ’em and the coaches lose ’em,’” Perleberg said. “I’ve just been fortunate to have a lot of great players along the way.”

The Post 42 American Legion baseball team split a pair of games with West Fargo of North Dakota on Saturday at Hladky Memorial Stadium. Gillette won the first game 4-3 before losing 6-5 in extra innings in the nightcap.

The Roughriders won game one in walk-off style on a Cory Schilling sacrifice fly that scored Joey Sturdevant in the bottom of the seventh inning. Jason Fink had two RBIs at the plate while Zane Eliason drove in one.

Gillette led 1-0 through four innings, but Fargo scored three runs in the top of the fifth to take a 3-1 lead. After the Roughriders scored two runs in the bottom of the sixth, Schilling's sacrifice fly closed out the game at 4-3.

In game two, the Roughriders had a 5-4 lead going into the seventh inning, but the Patriots plated a run in the top of the inning. Gillette couldn't score in the bottom half to send the game to extra innings.

Fargo scored in the top of the eighth on a passed ball to take a 6-5 lead and shut out the Roughriders in the bottom of the inning to seal the win.

Eighth grader Mason Drube led the Roughriders with two RBIs at the plate while Matt Newlin, Sturdevant and Fink each drove in one run apiece.

Leighton Holden pitched five innings and allowed three runs on nine hits and struck out four but got a no decision. The Roughriders were out-hit 12-10 in the second game.

Post 42 (30-15) will return to the field Wednesday at Jackson for a doubleheader before playing in a tournament in Jackson next weekend.