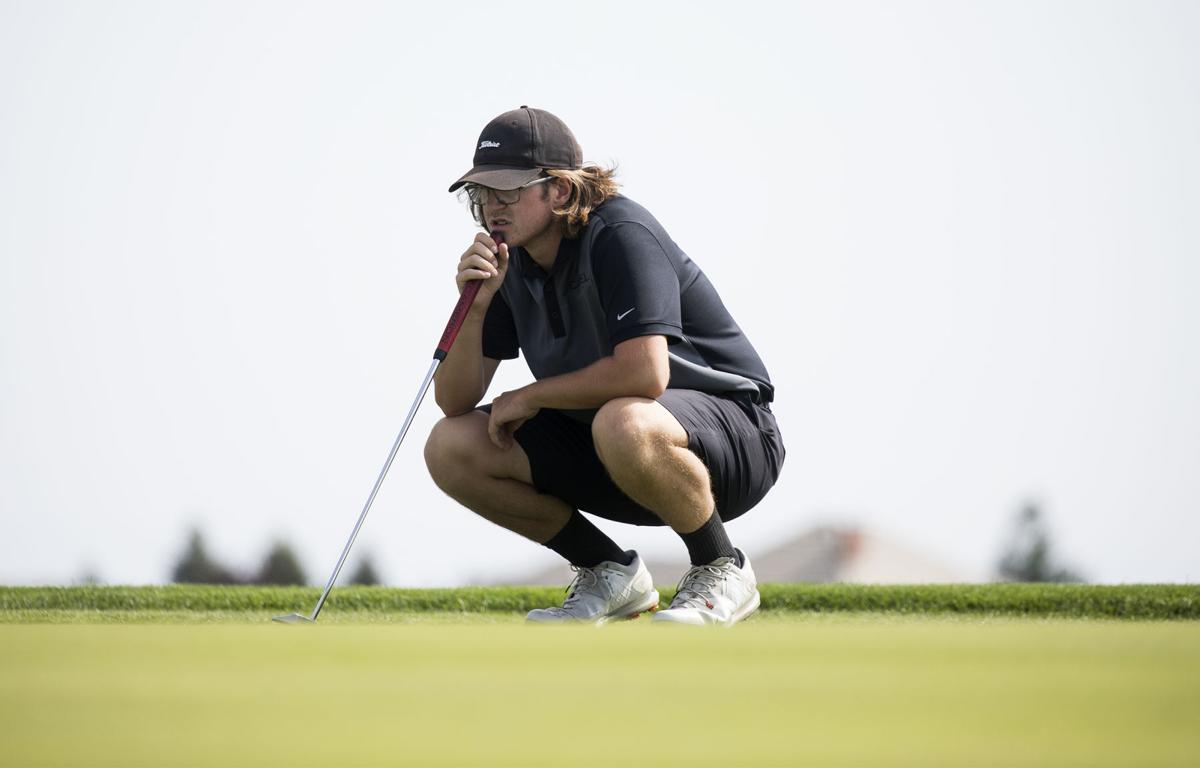 Shay Leupold of Campbell County High School lines up his shot on the green during the Thunder Basin Invite at Bell Nob Golf Course earlier this season. 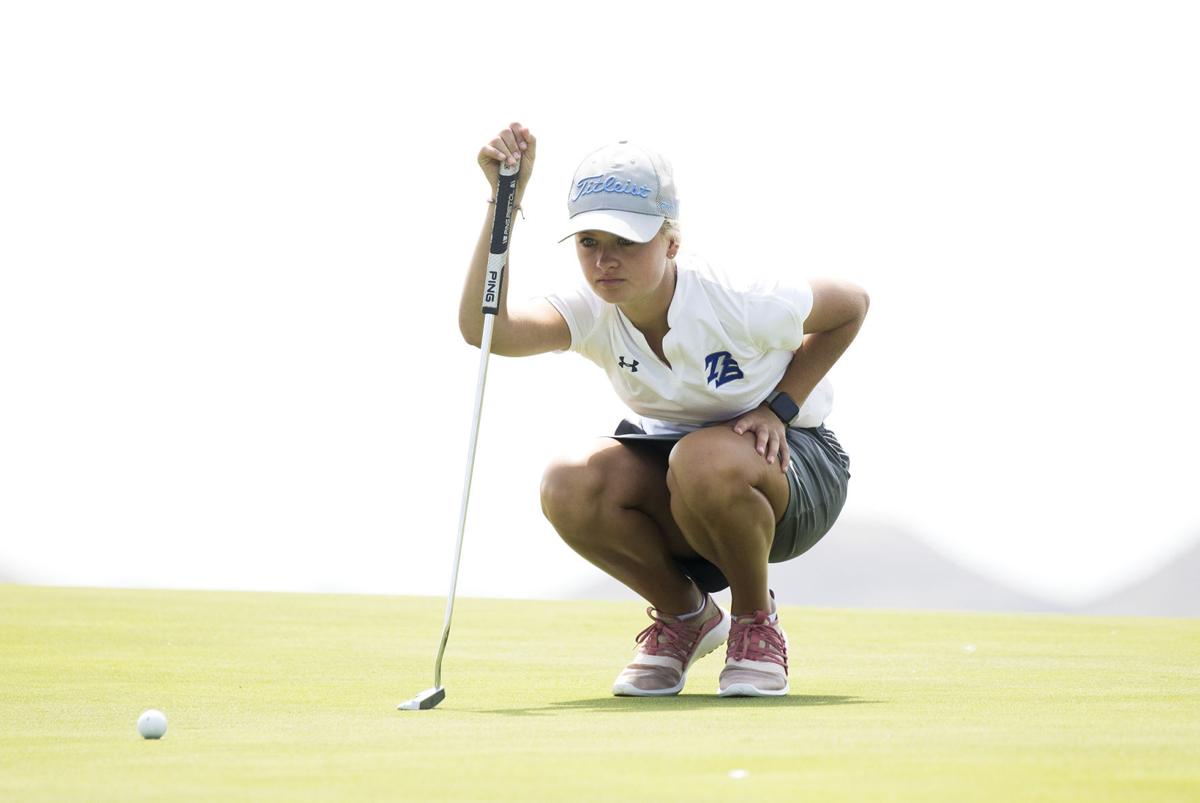 Kendall Gemar of Thunder Basin High School lines up her putt at the Thunder Basin Invite at Bell Nob Golf Course in Gillette earlier this season. 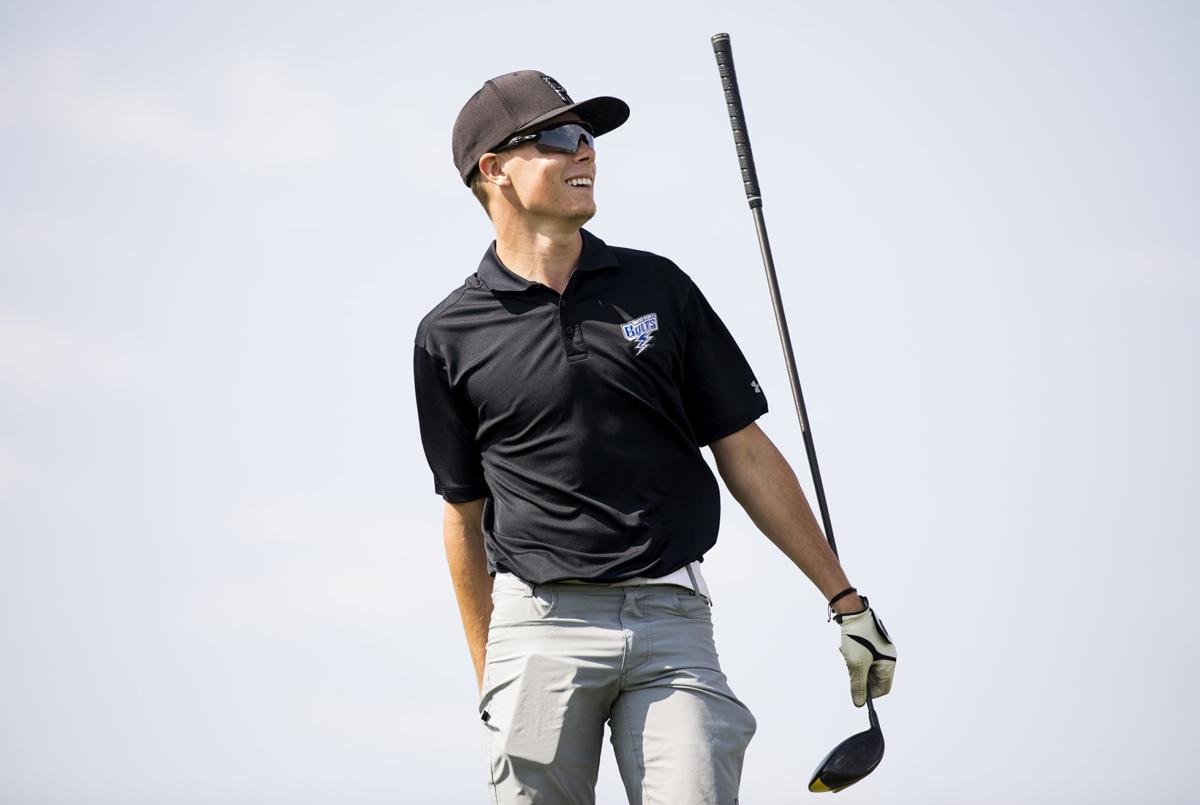 Leigton Holden of Thunder Basin High School reacts after teeing off during the Thunder Basin Invite at Bell Nob Golf Course in Gillette earlier this season.

Shay Leupold of Campbell County High School lines up his shot on the green during the Thunder Basin Invite at Bell Nob Golf Course earlier this season.

Kendall Gemar of Thunder Basin High School lines up her putt at the Thunder Basin Invite at Bell Nob Golf Course in Gillette earlier this season.

Leigton Holden of Thunder Basin High School reacts after teeing off during the Thunder Basin Invite at Bell Nob Golf Course in Gillette earlier this season.

After just four regular season tournaments, the fall golf season will come to a close with the Class 4A state tournament this weekend in Jackson.

Ten athletes from Thunder Basin High School and six from Campbell County will represent their schools at state. Golfers who finished inside the top 20 of the Class 4A East state qualifier tournament qualified for state, CCHS coach Bryan Young.

Leupold is coming off a win at the 4A East state qualifier. He won the boys title with a two-day score of 147 including a 72 on day one and a 75 on day two. Leupold also won the Thunder Basin Invite at Bell Nob Golf Course last month.

Leupold wasn’t the only Camel to win a tournament during the regular season. Morrison won the Buffalo Invite with a two-day score of 155 earlier this month.

On the girls side, the Bolt girls finished third as a team with a score of 535. Campbell County didn’t have enough female golfers to score as a team.

Having the tournament on two different golf courses will be a big adjustment for the athletes, Young said. Instead of making adjustments from day one to day two, golfers will be experiencing a completely different course for the final day of the season.

Young feels confident in the CCHS boys team going into the state tournament. He believes Leupold has a decent chance to bring home a state title but it will all come down to who can string together the best two rounds consecutively.

As far as the team, the key for the Camels will be to have a solid four scores to put toward a team title. Five golfers make up a team but the lowest four scores count for a team score, Young said.

“We just haven’t had that tournament yet where all four of us show up and play like we know we can,” Young said. “I know we can but it’s just one of those things. Who knows, maybe they were saving it for state.”

Young’s goal for Hammerquist is to finish inside the top 20 for the girls. The focus will all be on the individual score since no team score is possible as the only female golfer on the Camels’ varsity team.

Hammerquist finished ninth with a score of 179 at the Class 4A state qualifier.

“She would have been about sixth or seventh in the West, so I definitely think she can do top 20,” Young said. “She’s been playing pretty good and playing consistent so I’m looking forward to watching her down there to and seeing her compete.”

For Thunder Basin, the girls team will go into state looking to defend its state title. The Bolt girls have won the last two state team titles.

The Thunder Basin boys didn’t qualify as a team after finishing in fifth place at the state qualifier. Only the top 4 teams qualify for state.

But the Bolts will still have a full boys team at the state tournament because all five golfers finished inside the top 20.

The Cheyenne Central boys had the lowest team score (630) out of both state qualifier tournaments. Sheridan and Kelly Walsh both finished with scores of 634 and Jackson finished with a score of 636.

Last year, the Thunder Basin boys finished sixth as a team and the Camels finished seventh.

The Campbell County and Thunder Basin high school golf teams traveled to Cheyenne for the Class 4A state qualifier tournament at the Airport Golf Club on Thursday and Friday.

Camel Shay Leupold finished first on the boys side with a two-day score of 147. Leupold shot 72 on day one before finishing with a 75 on day two.