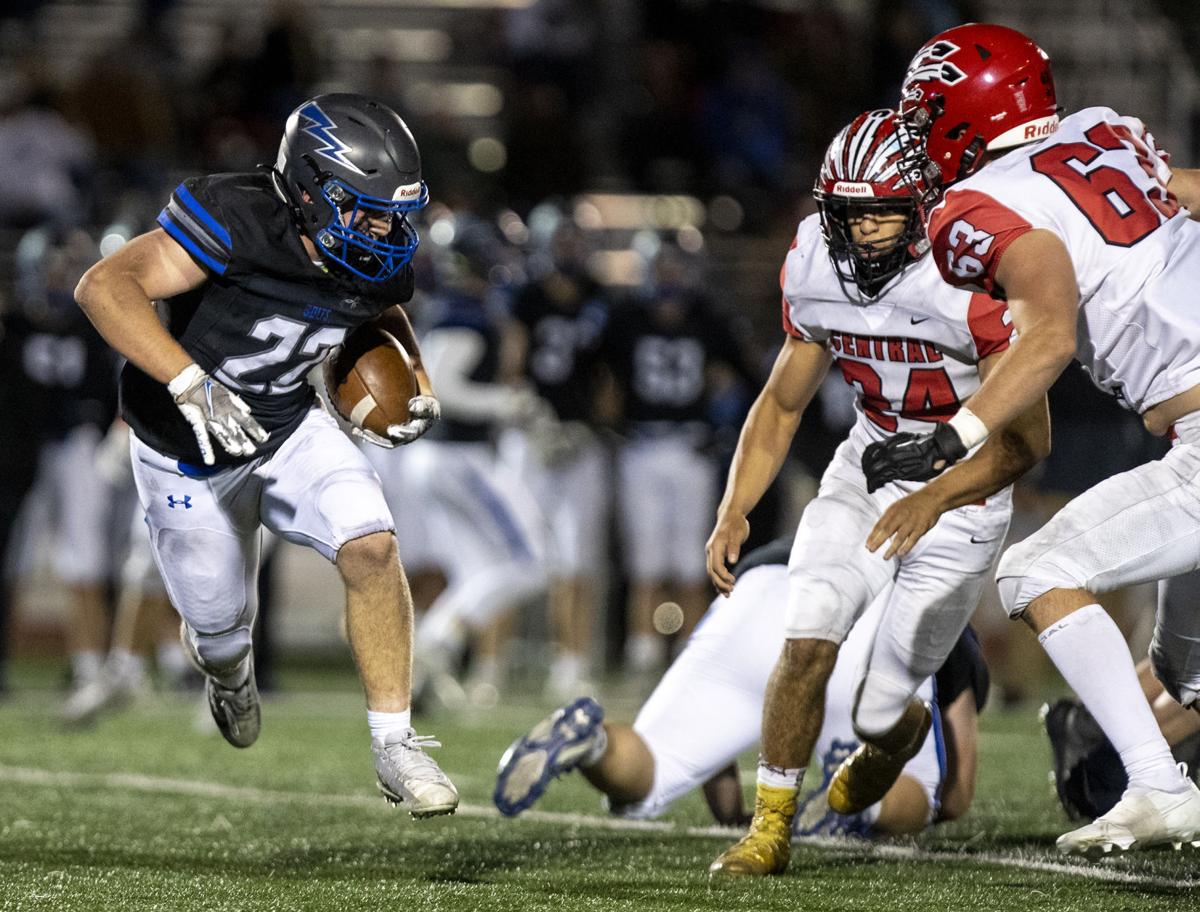 Bolts senior Caden Randall looks for a hole to run through against Cheyenne Central on Friday night at TBHS. 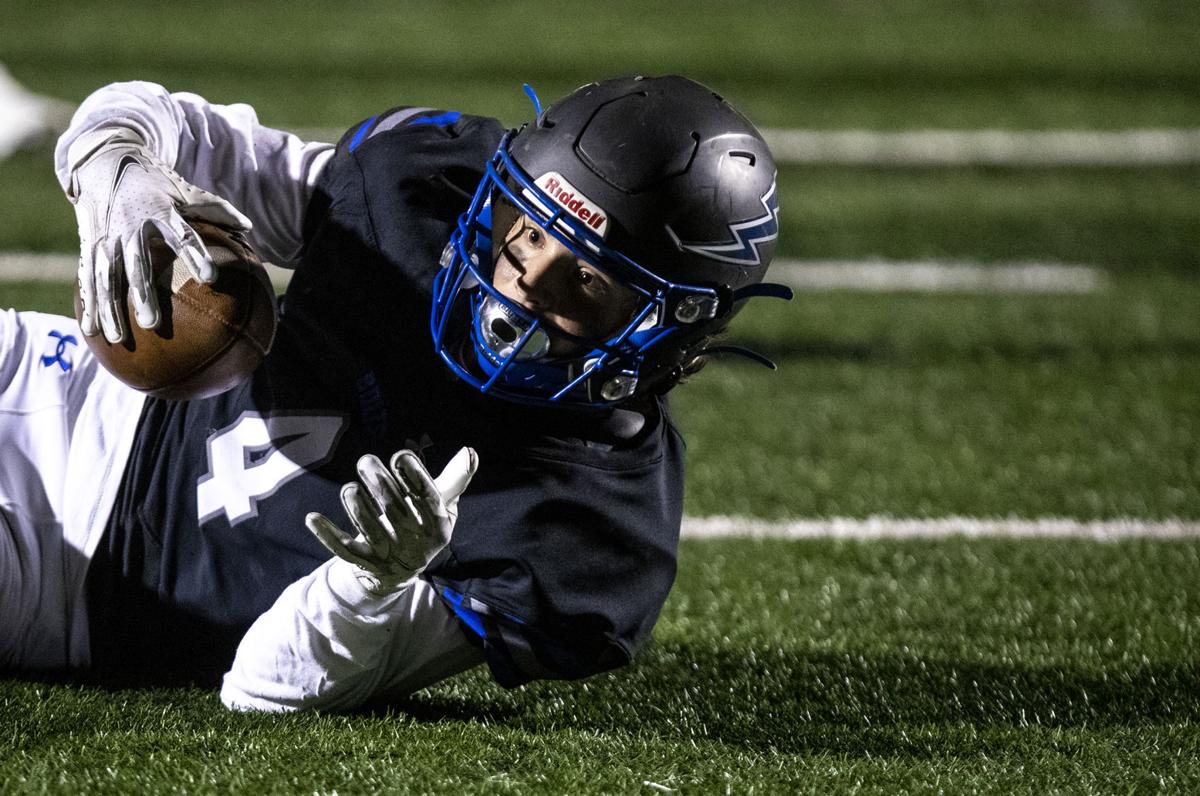 Senior Cade Ayers looks around to see if he crossed into the end zone during Friday evening's home matchup with Cheyenne Central. 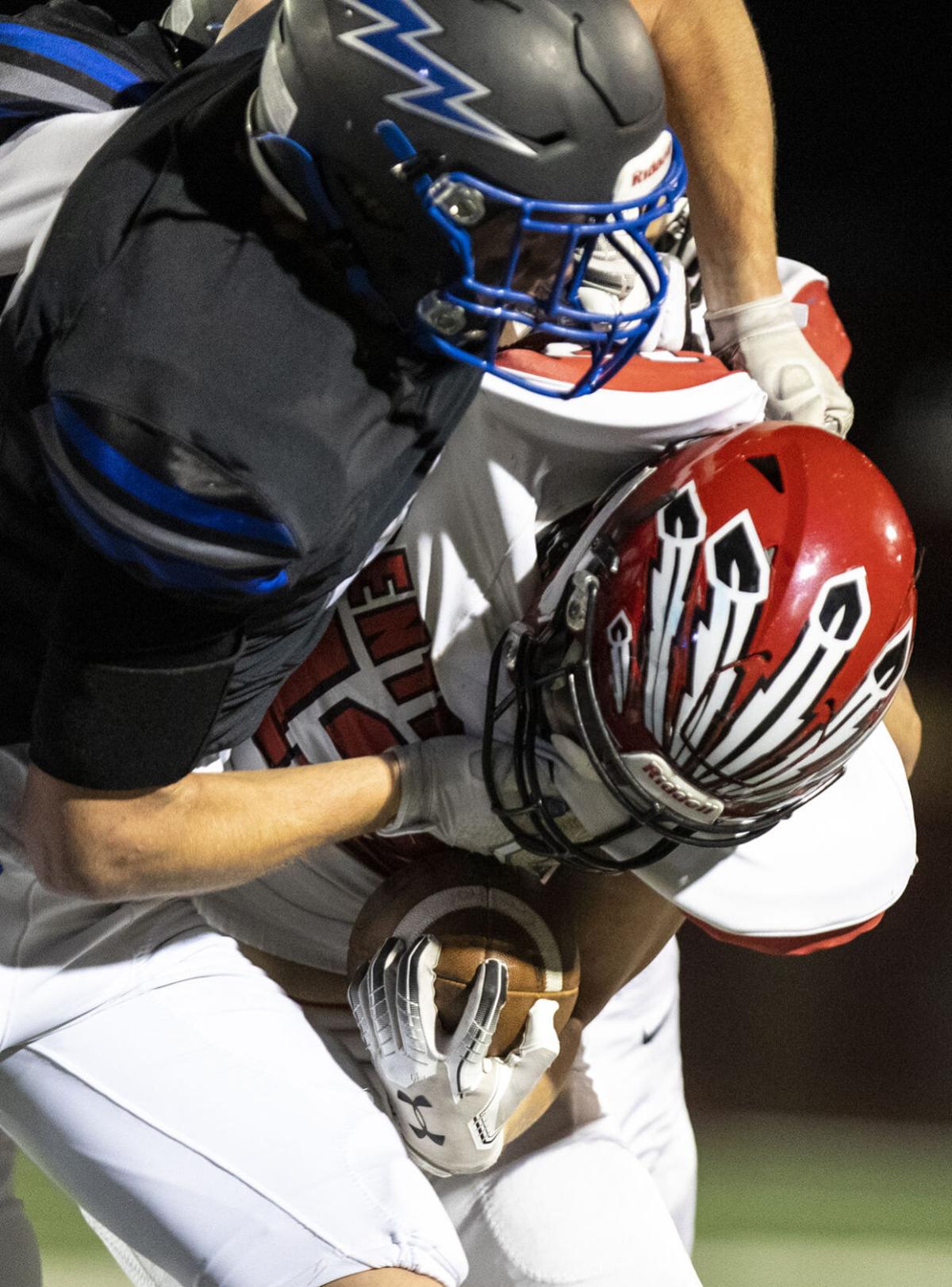 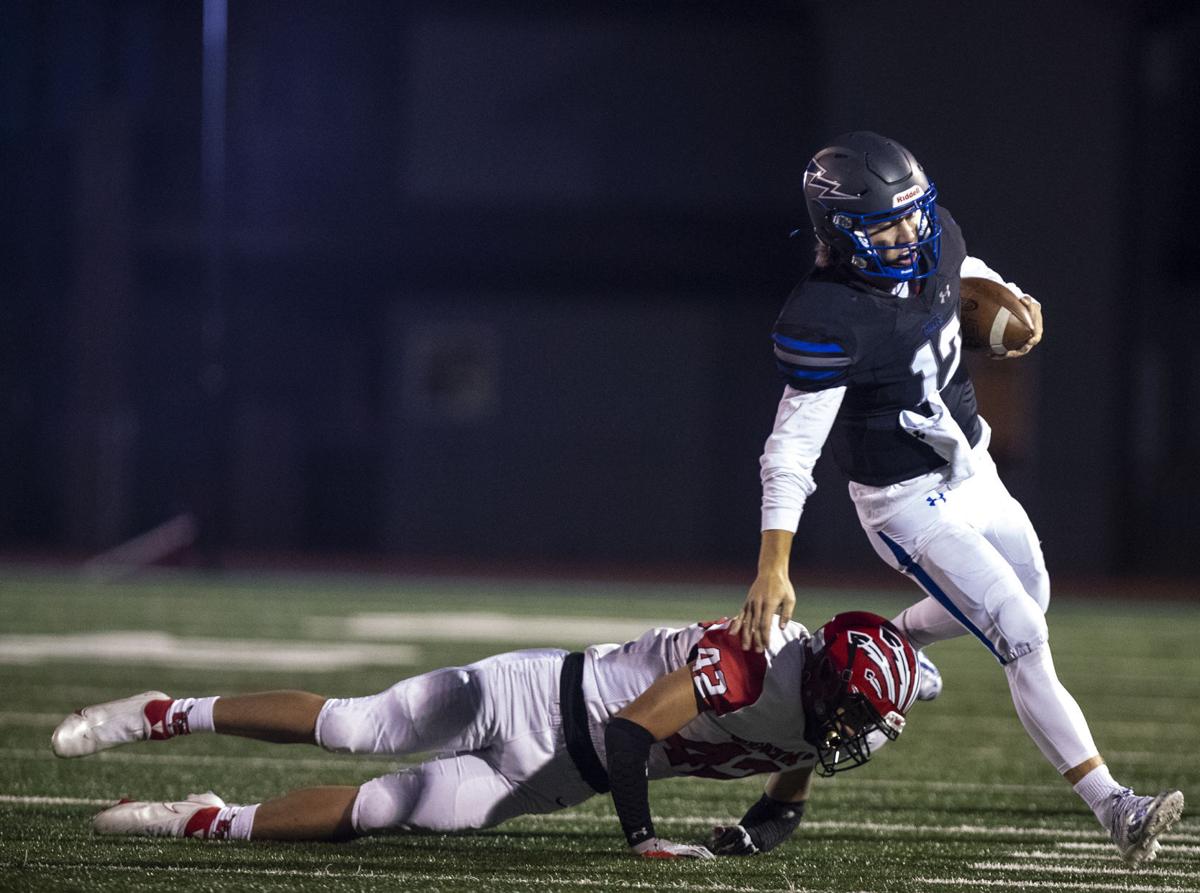 Senior quarterback Ryan Baker runs the ball out of bounds while gaining yardage for the Bolts against Cheyenne Central at home earlier this season. 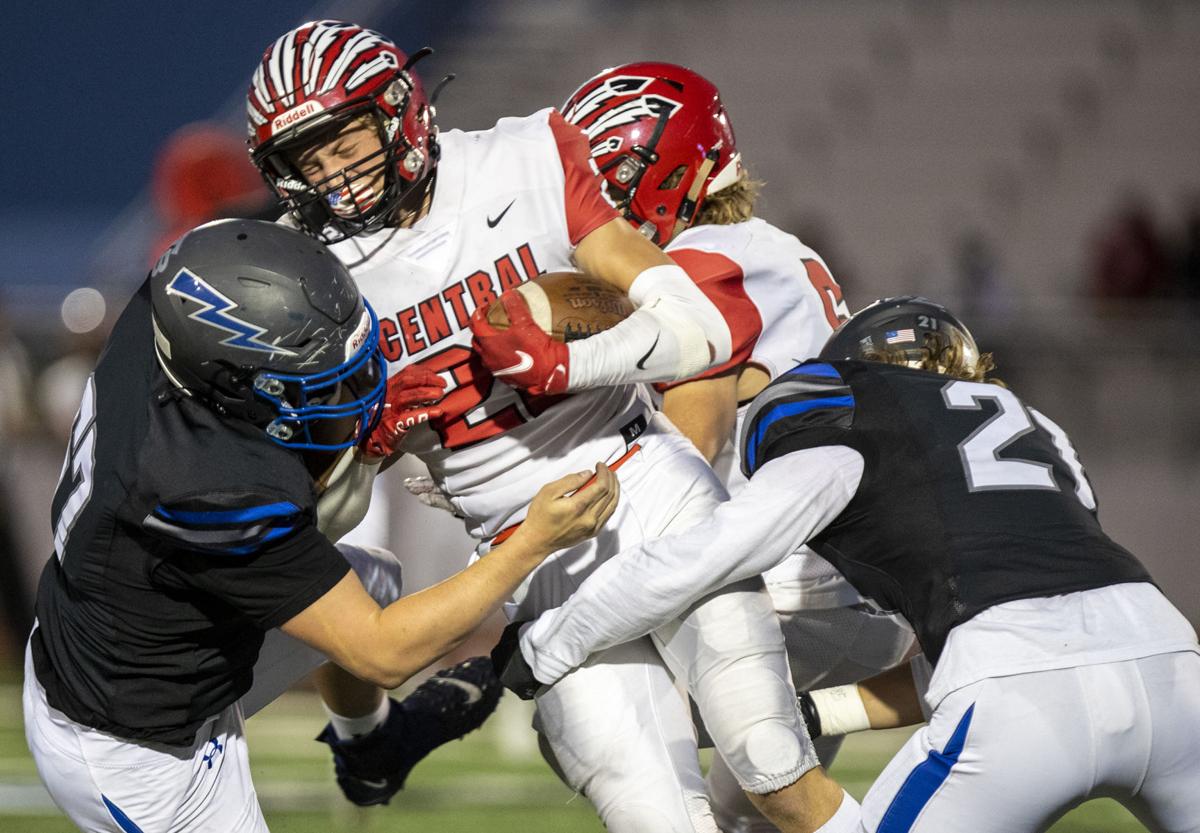 Bolts senior Caden Randall looks for a hole to run through against Cheyenne Central on Friday night at TBHS.

Senior Cade Ayers looks around to see if he crossed into the end zone during Friday evening's home matchup with Cheyenne Central.

Senior quarterback Ryan Baker runs the ball out of bounds while gaining yardage for the Bolts against Cheyenne Central at home earlier this season.

The Bolts went into its matchup with the Indians ranked No. 3 in the WyoPrep.com coaches and media football rankings. Despite having an 0-3 record going into Friday, Pikula knew Central's football team was no easy win.

The Indians led the Bolts all the way up until the end of the third quarter. Cheyenne took an early 7-0 lead on a 62-yard quarterback scramble from Keagan Barlett with two minutes left in the first quarter.

The Bolts were able to cut into the Indian's lead with a 27-yard field goal off the foot of senior Cade Ayers to make the score 7-3 in the third quarter.

The story of the game for both team's was big defensive stands. Central and Thunder Basin combined for 11 punts and five turnover on downs throughout the game.

The Bolts' mantra all season has been to step up when it matters most. Thunder Basin did just that on one play late in the game on Friday.

After the Bolts' defense forced a Central turnover on downs, senior quarterback turned around and threw a strike to wide receiver Kayden LaFramboise who took it the distance 70 yards for Thunder Basin's only touchdown of the game.

But it would be the only touchdown the Bolts needed as the Thunder Basin defense was able to hold the lead at 10-7 through the entire fourth quarter to seal the win.

The Indians were able to set up for a game-tying field goal with two seconds left on the clock but the kicker sailed it left to clinch the game.

"Defensively we just played lights out," Pikula said. "That's as good as you can play (on defense). Central is 0-4 but they are not an 0-4 team."

Central has gone through the gauntlet of Class 4A through its first four games of the season. The Indians have already played Kelly Walsh, Natrona County, Sheridan and Thunder Basin. All four teams were playoff teams a year ago.

Pikula feels good about the team's 3-1 record through the first month of the season. The Bolts beat Cheyenne East, Cheyenne South and Central and lost to No. 1-ranked Rock Springs.

"These were mostly teams that people thought would be in the playoffs," Pikula said. "I wish we could get that Rock Springs game back but being 3-1 at this point having played the schedule that we've played, I'm pretty happy with that."

Against Central, Thunder Basin's offense totaled 245 yards of offense on 59 plays. Baker was 15 of 29 passing for 147, one touchdown and one interception which came on a long throw right before halftime.

Senior Caden Randall led the backfield with 16 carries for 68 yards. Nic Black added seven carries for 31 yards and gave the Bolts some much-needed momentum during a drive late in the game.

"Offensively I don't think we've really found our stride yet," Baker said. "But when we do I think we're going to be pretty dangerous."

Defensively, the Bolts held the Indians to 293 yards of offense on 62 plays. Thunder Basin's defense had eight plays for negative yards and seven more plays for less than two yards.

Baker reiterated Pikula's thought that Central was a better team than their record would indicate. The team's 3-1 record isn't anything Baker or his teammates are hanging their heads on at this point in the season, he said.

"We're 3-1 and that loss came to Rock Springs so you can't be disappointed in that," Baker said. "We obviously wish we were 4-0 but we're 3-1 and that's pretty good. You just have to take it week by week."

The next challenge for the Bolts will be a big crosstown rivalry game with Campbell County (2-2) on Friday. The Camels are coming off a big 67-15 win over Cheyenne South this week.

The Bolts have beat the Camels all five times the school's have played since TBHS opened in 2017. But Baker knows this year's Campbell County team isn't an opponent to take lightly.

"They've got some dudes this year and I know a lot of those guys and I've been playing against them since we were in midget football," Baker said. "They're going to bring it and they're going to be on their home field and we have to be ready to play.

"They aren't the Camels they have been for the last couple of years. We know that. ... It'll be a fun game. Those crosstown games are always fun."

The Camels and Bolts will play at 7 p.m. Friday at Camel Stadium.