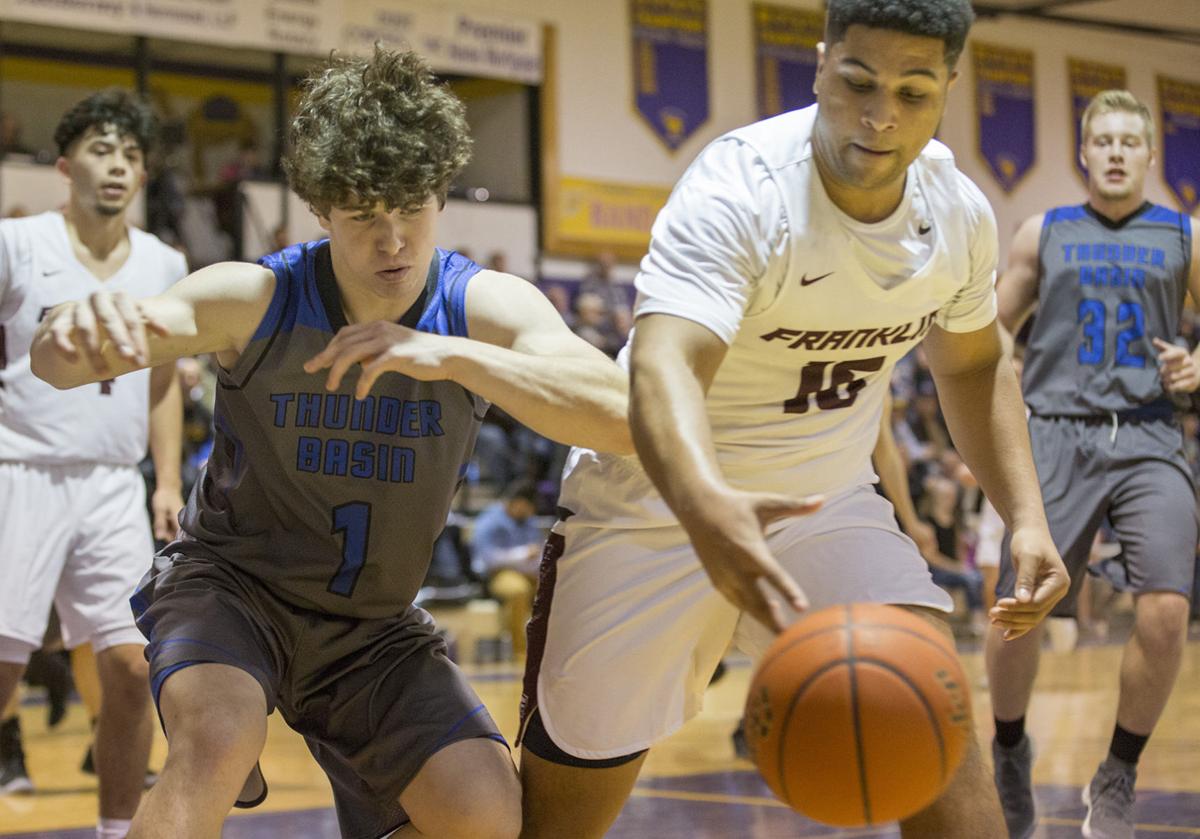 Thunder Basin’s Mason Hamilton races to gain control of the ball after a rebound at the Energy Classic in 2017. 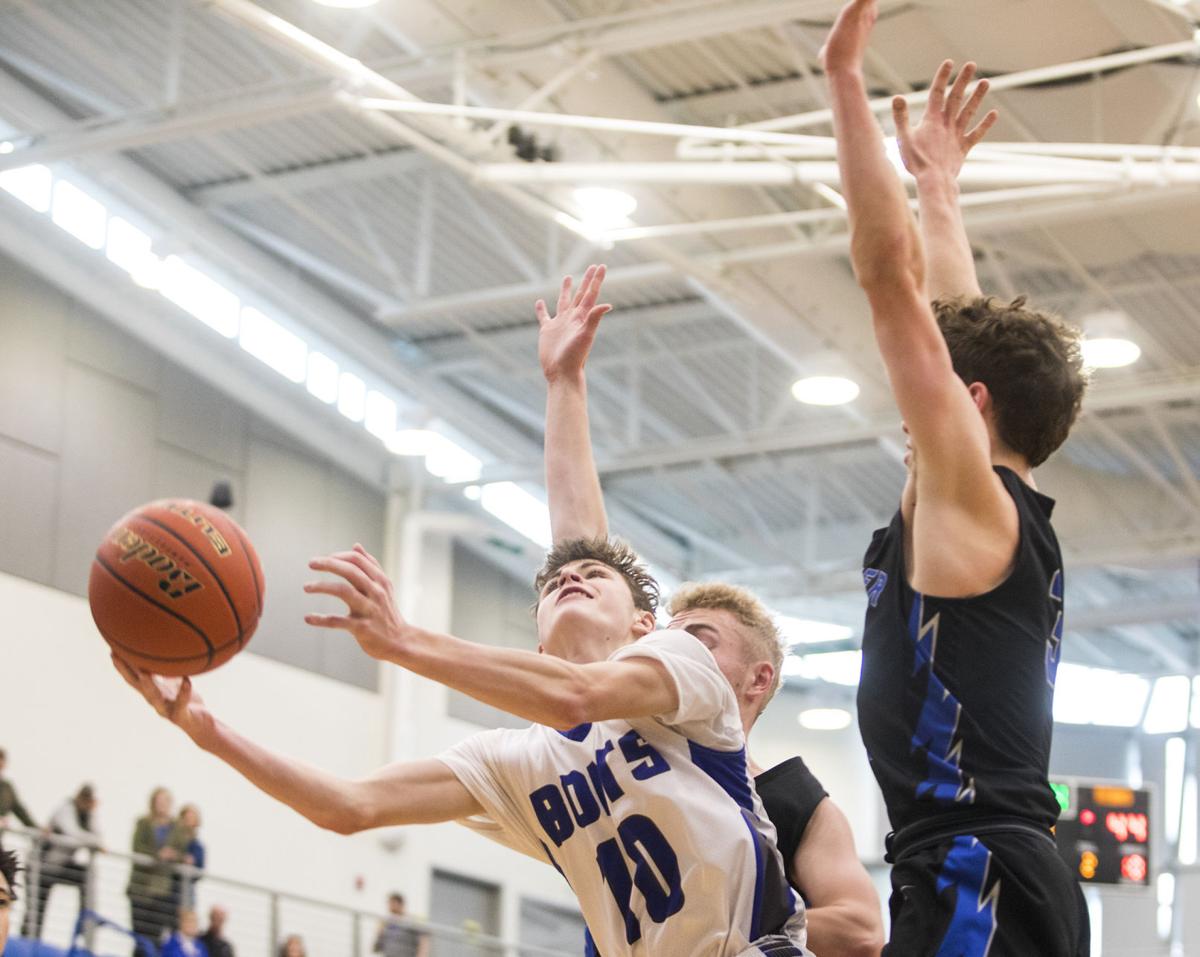 Thunder Basin Bolts Deegan Williams, at left, makes his way to the basket during a game against Thunder Ridge Titans in the Gillette Energy Classic Tournament in 2020. 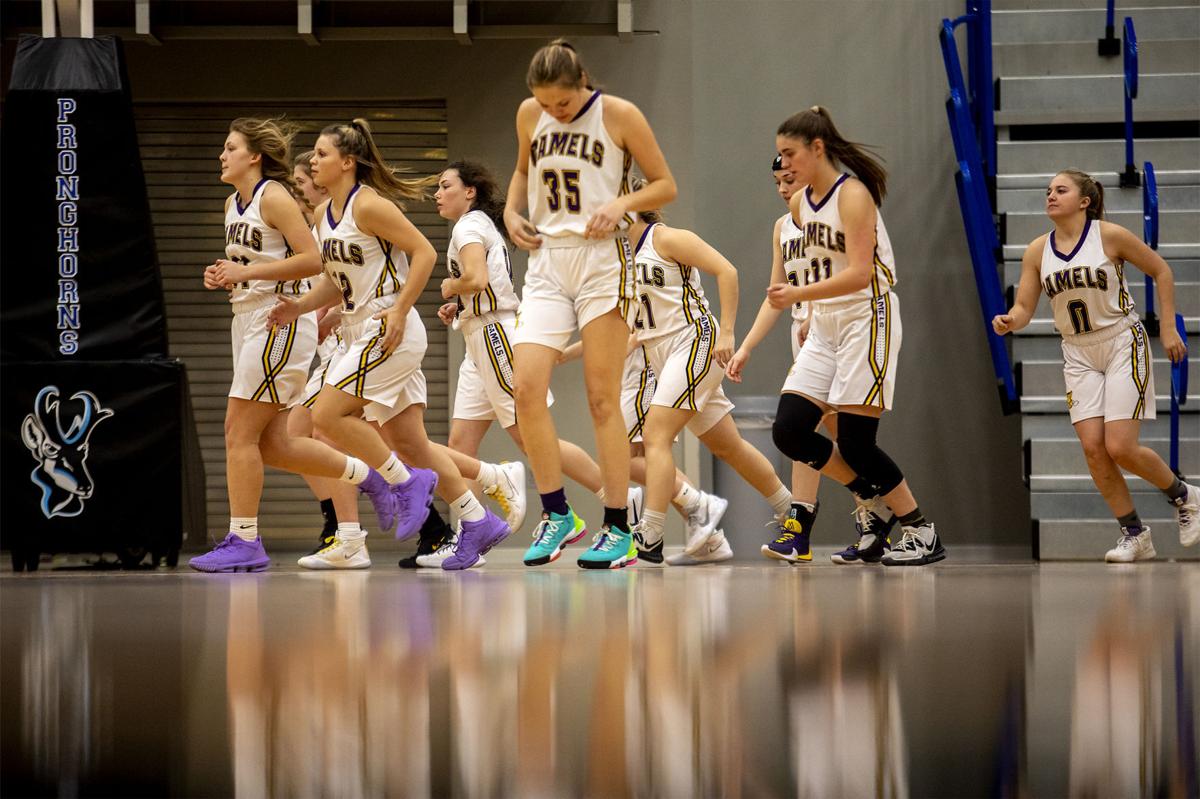 The Campbell County Camels take the court for their first game of the Energy Classic Basketball Invitational against the Thunder Ridge Titans in 2020.

Thunder Basin’s Mason Hamilton races to gain control of the ball after a rebound at the Energy Classic in 2017.

Thunder Basin Bolts Deegan Williams, at left, makes his way to the basket during a game against Thunder Ridge Titans in the Gillette Energy Classic Tournament in 2020.

The Campbell County Camels take the court for their first game of the Energy Classic Basketball Invitational against the Thunder Ridge Titans in 2020.

James Chick and Dave Olsen both participated in the first Energy Classic Committee meeting 25 years ago.

Soon, both men will participate in the committee’s last.

Chick and Olsen were both instrumental in assembling the annual Energy Classic Holiday Basketball Tournament. At its peak, the event featured a handful of nationally ranked high school basketball teams from across the country, including Campbell County High School.

The tournament was canceled this year for the second consecutive year for multiple reasons, the main one being COVID-19. But the tournament isn’t just on a two-year hiatus, Chick and Olsen believe the tournament has a very good chance of never being played again.

History of the tournament

The annual eight-team tournament started in 1996 to give Campbell County more home games during its stretch of basketball dominance on both the boys’ and girls’ side. The Camels were limited to just five home conference games in one season because no one wanted to travel to Gillette for to play in a non-conference contest, Olsen said.

The original goal of the Energy Classic Committee was to recruit schools from bordering states. But Olsen and Chick ran into problems with the different restrictions states put on schools for competing during holiday breaks.

Montana, Idaho, South Dakota and Colorado schools were all ruled out because of no-compete restrictions between Christmas and New Year’s Day, Chick said. Another obstacle was finding schools that were willing to sacrifice three games of their schedules to come play in the tournament since teams are limited to a certain number of games throughout a season.

“We eventually just started looking farther and farther out and getting teams from Las Vegas and Oregon and Washington and California and even Canada,” Chick said. “Gosh, one year we even had three of the top 10-ranked girls teams in the country.”

The tournament was created during the peak of high school basketball in Gillette. From 1994 to 1998, the Gillette girls won five consecutive state championships. The boys won six in a row from 1992 to 1997.

For years, the Energy Classic sought out some of the best teams in the U.S., often hosting nationally ranked teams. Usually, the committee would invite teams west of the Mississippi River, but there have been teams from as far as Florida and Washington, D.C., that made the trip in the past.

One year, Olsen remembers when the spectators were treated to a showdown between the top two teams in the nation. Lynwood High School of Lynwood, California, ended up beating Northside High School of Fort Smith, Arkansas, in the Energy Classic championship.

Lynwood was undefeated and the No. 1 ranked girls basketball team in the nation at the end of the season, while Northside finished No. 2 with its only loss coming at Gillette’s tournament.

Gillette has hosted individual players like Sabrina Ionescu and Luke Babbitt in the tournament. Ionescu was the No. 1 pick in the 2020 WNBA draft and Babbitt was drafted No. 16 in the first round of the 2010 NBA draft.

The competition at the tournament was a huge draw to basketball fans in Gillette and in Wyoming. Local residents would use the holiday break to watch of the best high school basketball talent in the country with their families, Chick said.

“People would plan their vacations around Christmas just to take it off to come back to Gillette and watch the tournament and to be a part of it,” Chick said. “They would just sit and watch basketball all day long. It was just a really phenomenal event for a lot of years.”

The Energy Classic’s future is all but decided.

Last year’s event would have been the 24th annual tournament before it was canceled because of COVID-19. This year’s tournament was canceled for a similar reason: The committee doesn’t have anyone to invite.

The states with some of the strictest COVID-19 restrictions are the states that were previously being represented at the Energy Classic. Most schools in California, Oregon and Nevada haven’t played a full basketball season in two years.

That was one of the reasons Chick and Olsen decided to step down and disband the Energy Classic Committee. The committee likely will have one last meeting to recognize what they were able to accomplish in the last 25 years.

“We never wanted to see the tournament go away,” Chick said. “Our plan was to have this thing keep going forever and to pass the torch on to someone else.

“We just never really found the right people to pass the torch on to.”

Aside from COVID-19, the committee also was running into financial obstacles when it came to hosting the tournament. Through the entire event’s lifespan, the committee provided travel, food and lodging expenses for the teams who participated.

“We rolled out the red carpet for all the teams that came here,” Chick said. “That’s why they kept coming. It’s not like Gillette, Wyoming, was the vacation capital of the world in December for New Year’s Eve.

“We were competing with tournaments in Hawaii, Arizona and everywhere else, but people chose to come here because of the quality of the tournament.”

The committee originally charged a fee at the door for spectators to help with the cost of the tournament. But once the tournament started receiving a mill grant from the Campbell County Community Public Recreation District, attendance to games became free.

The grant was greatly reduced this past year because of the down-turning local and state economy, Chick said. Without the grant, the entire cost of hosting the tournament would have fell on the committee.

Another factor leading to the permanent cancellation of the tournament is the amount of time and resources the event required on a year-round basis. Chick and Olsen, along with many other community members, were constantly working to recruit schools and to raise money to help cover tournament expenses.

After investing 25 years of their time, Chick and Olsen have both decided it was time to step away for good.

“We’re both more than ready to step down,” Olsen said. “We’re kind of hurting a little bit to find the volunteers and the people who want to try and rework everything.”

While it may not be much, there is some hope alive for the tournament to continue on later. That would require a significant effort from individuals in the community who want to take over the reins of organizing the event in the future.

“If somebody wanted to start things up again, Dave and I would always be available to assist in some way,” Chick said. “But it’s just going to take someone else stepping up and doing all the work, because it was a lot of work.”

For now, Olsen and Chick have nothing but fond memories of their time spent organizing the event. The most rewarding part for both men was seeing the final product on the court for 23 consecutive years.

“Nothing is forever,” Olsen said. “Both of the high schools (CCHS and Thunder Basin) are going to play their games and they’ll be fine. But we probably won’t have this tournament in the community anymore.”

Chick was nostalgic when it came time to reflect on how successful the tournament’s run really was.

Both the Campbell County and Thunder Basin boys and girls basketball teams will still host one non-conference tournament with teams from out of state. The Re/MAX Basketball Tournament will open the season for both Gillette schools again this year. The tournament will be played Dec. 9-11.

The Bolts and Camels will play basketball during the Christmas break. It just won’t be in Gillette.

They will travel to the Hoop City Classic in South Dakota during the break. Games will be played at the Corn Palace in Mitchell and the Pentagon in Sioux Falls.