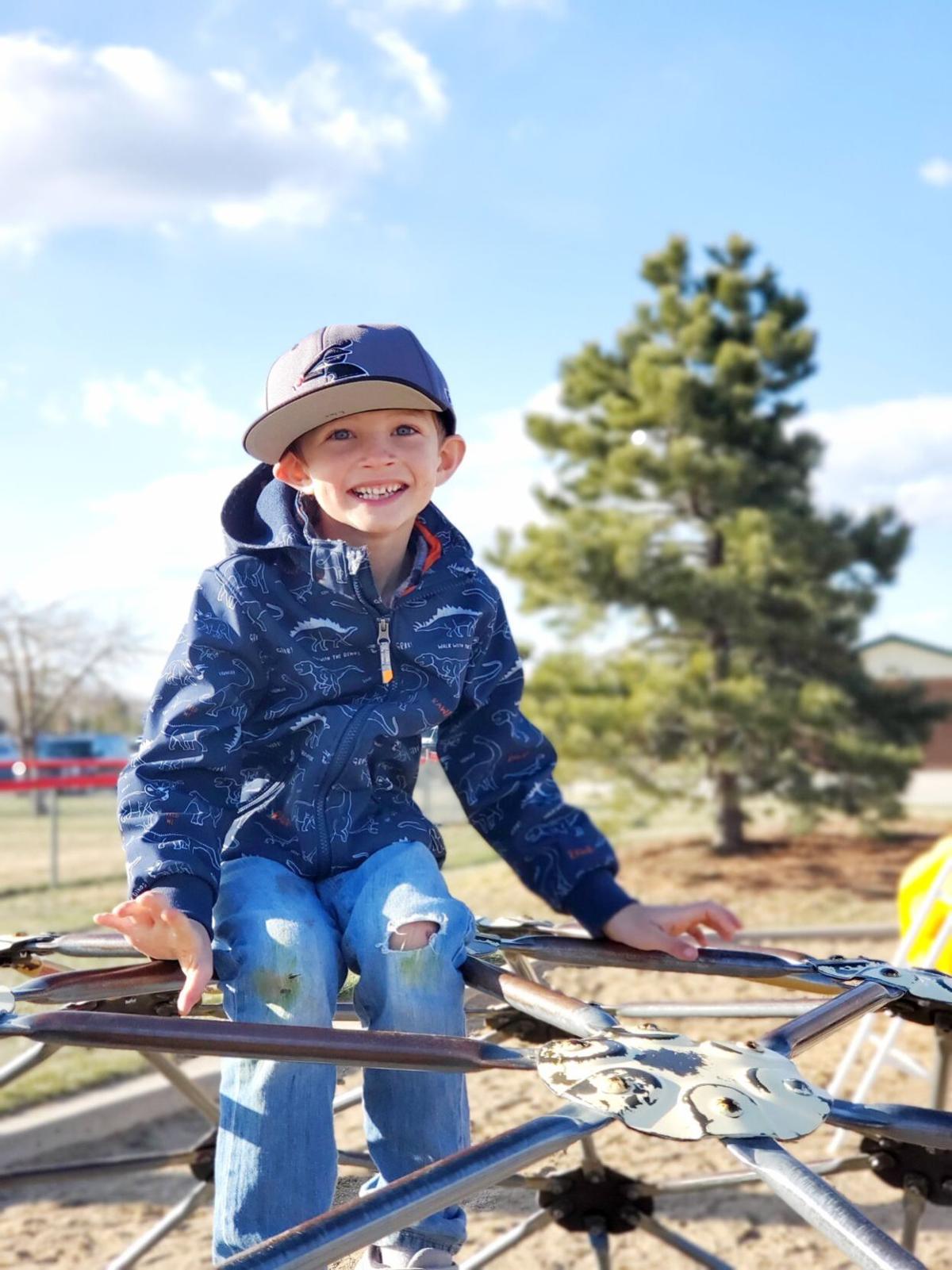 Lincoln Perleberg rests up at home after returning home from the hospital last week. 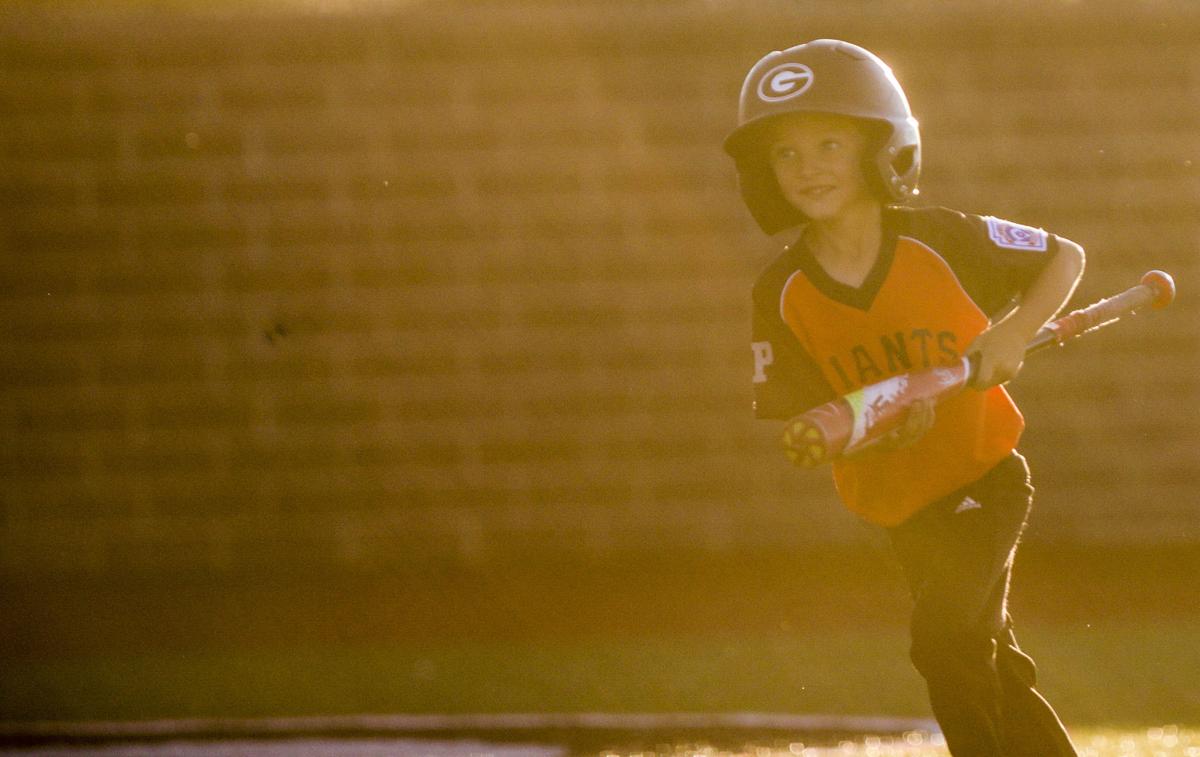 Lincoln Perleberg passes the time at the Children’s Hospital in Denver last week. Perleberg spent three days in the hospital after being struck in the back with a line-drive April 28. 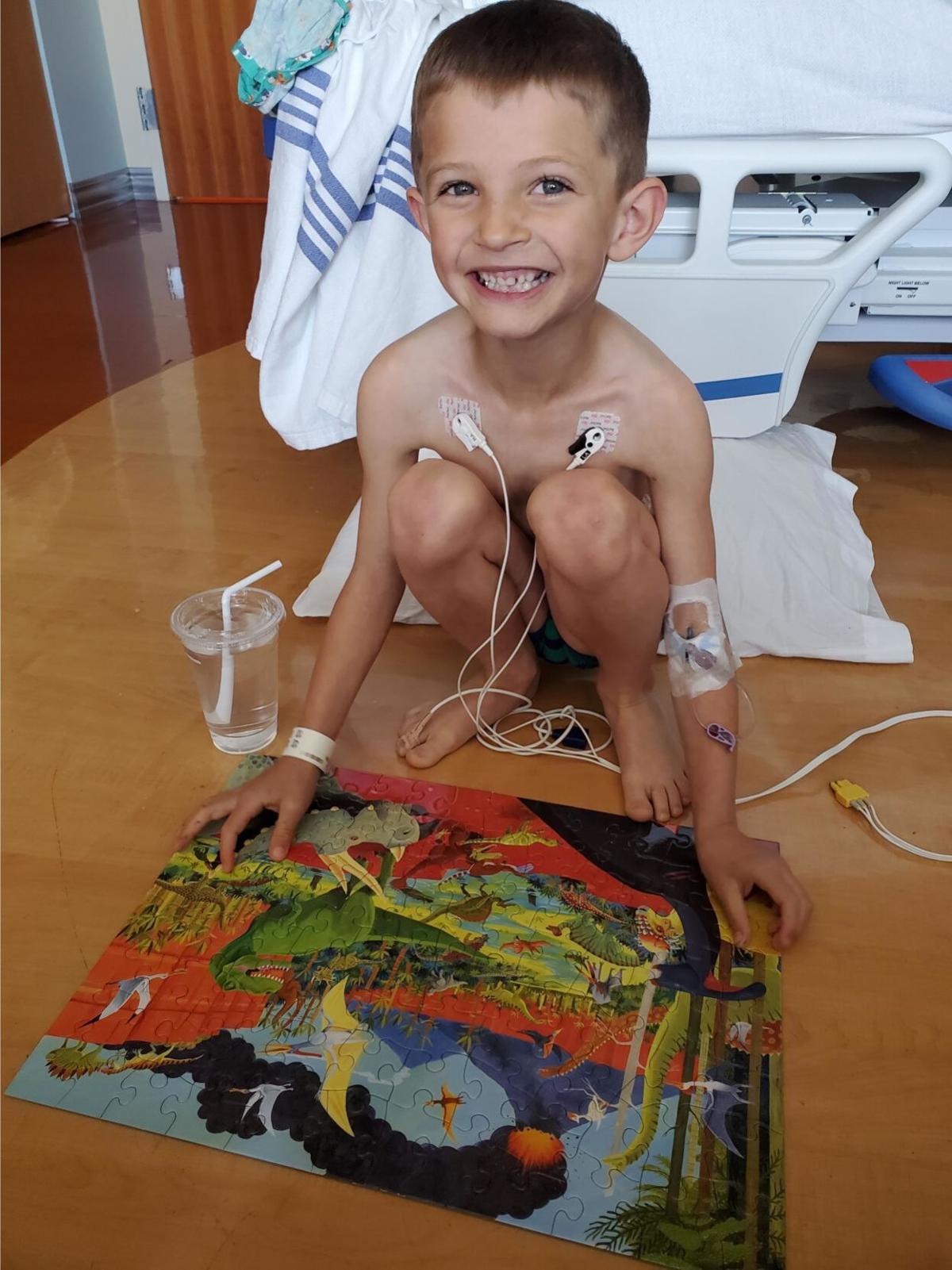 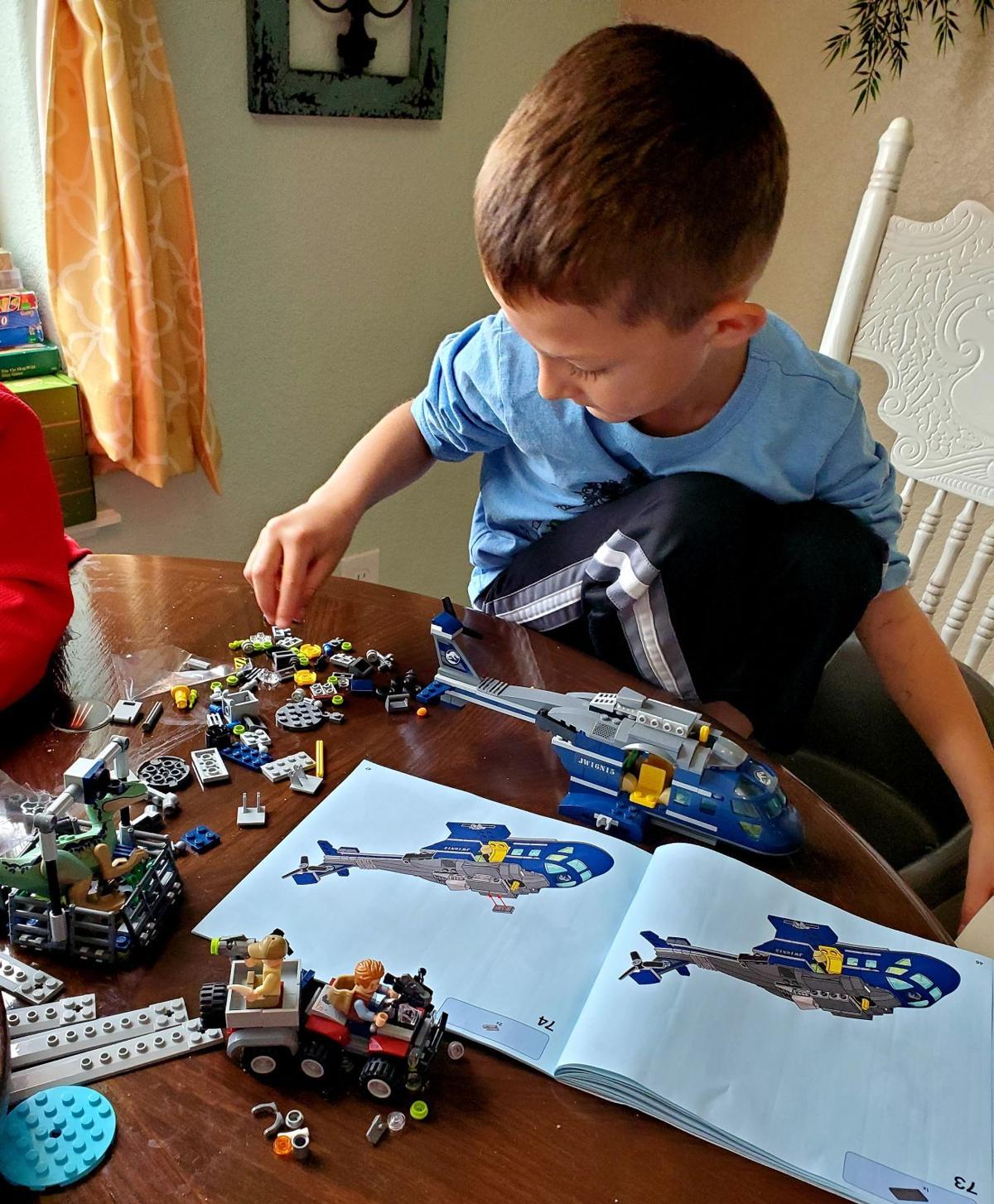 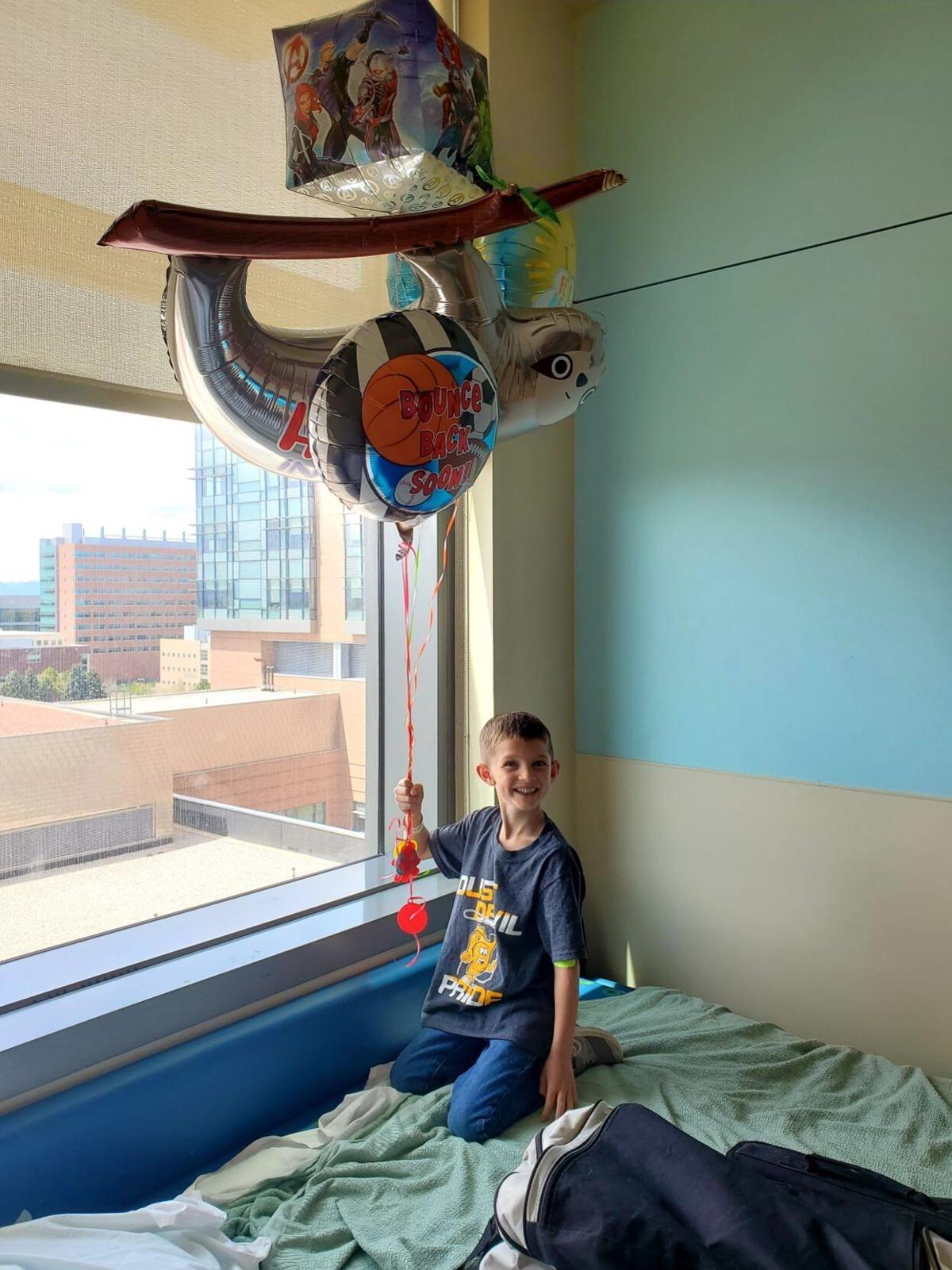 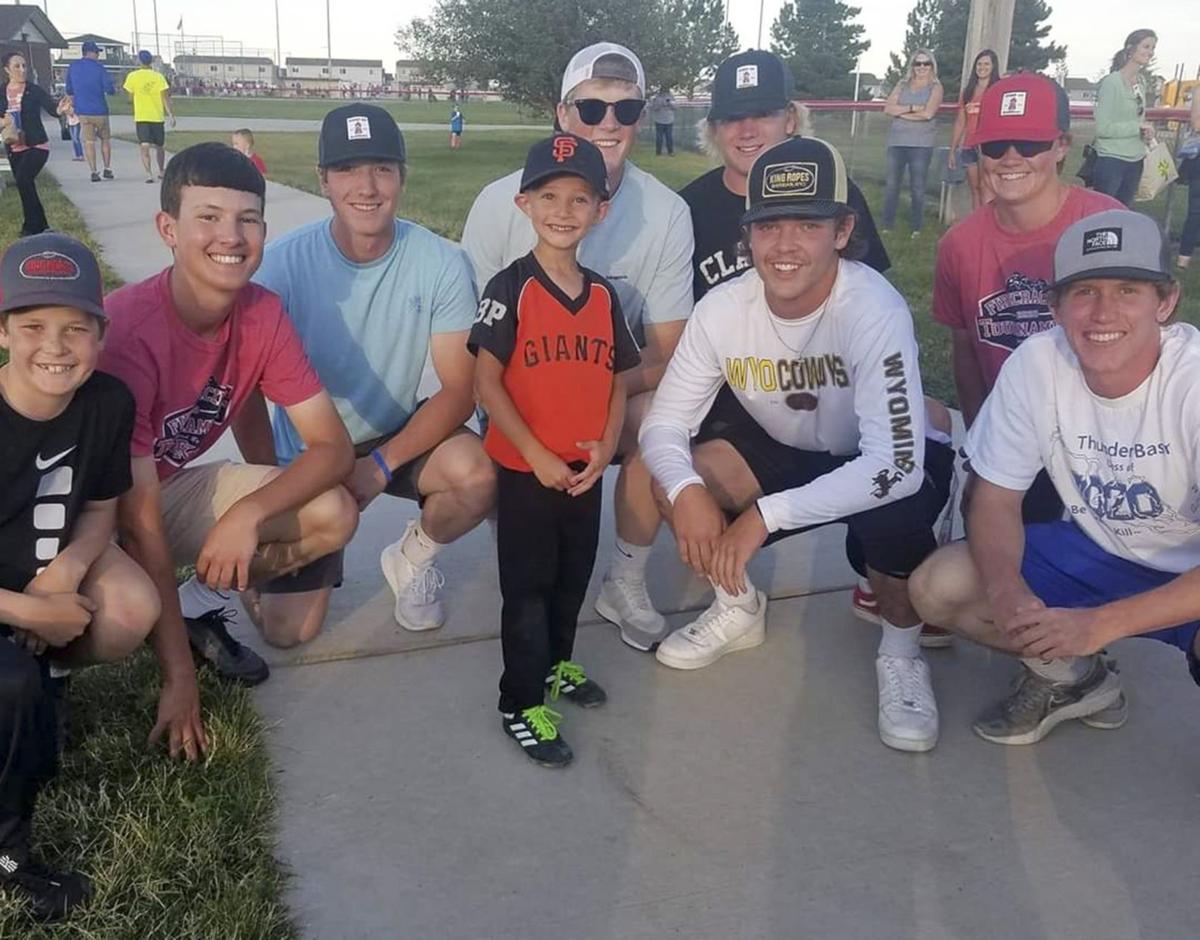 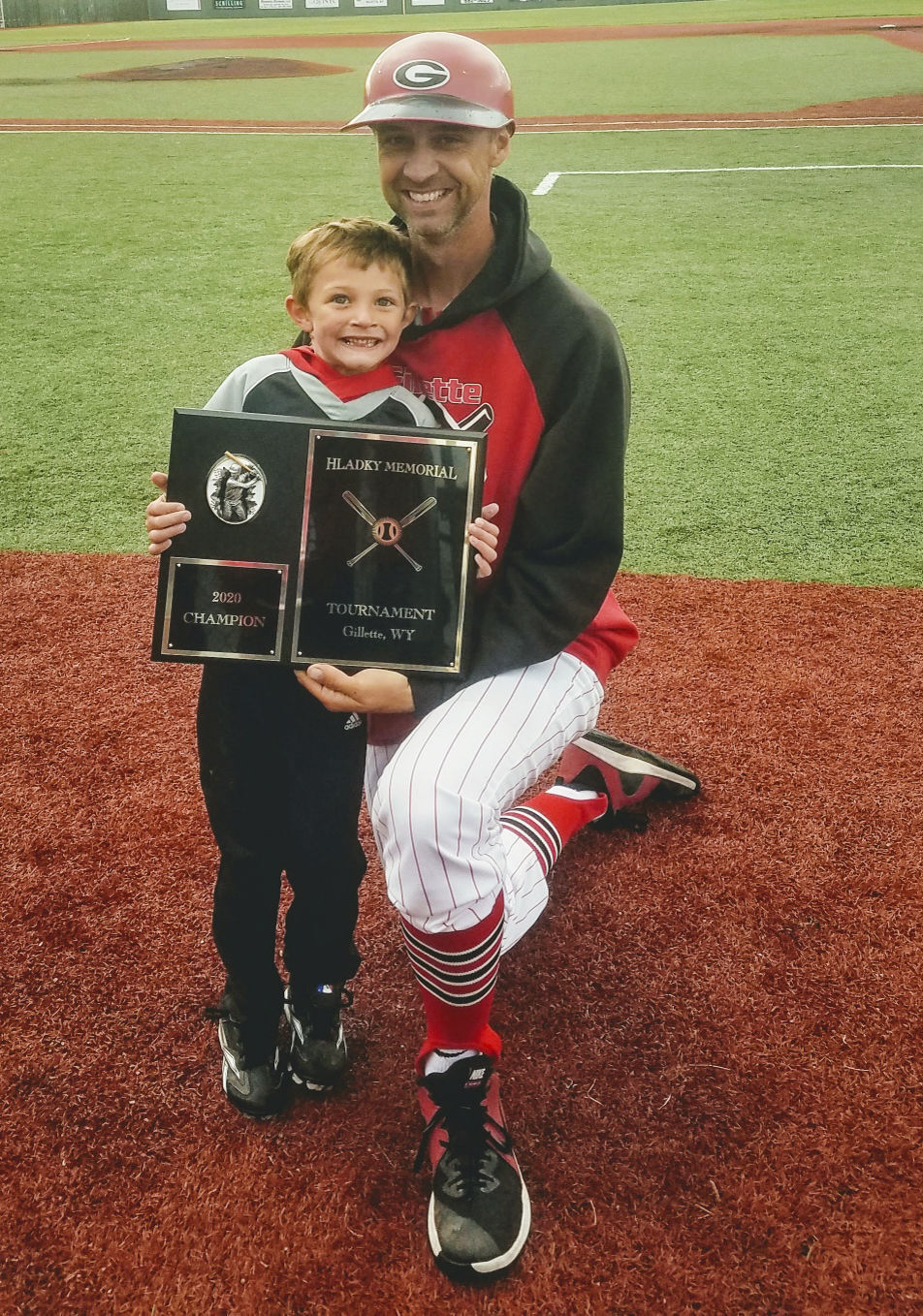 Lincoln Perleberg rests up at home after returning home from the hospital last week.

Lincoln Perleberg passes the time at the Children’s Hospital in Denver last week. Perleberg spent three days in the hospital after being struck in the back with a line-drive April 28.

Lincoln Perleberg has been hanging out at Hladky Memorial Stadium since he could walk.

The 6-year-old son of Nate Perleberg, who’s been coaching the Post 42 Roughriders American Legion baseball team for 16 years, has been a regular fixture at practices and games. Bringing Lincoln has been routine for Nate, and some of Lincoln’s earliest memories are Roughrider related.

Lincoln’s favorite part? Being the bat boy and shagging foul balls for his dad’s team.

“It’s like a whole family of brothers?” Nate asked his son.

April 28 was just another day at the ballpark for Lincoln and the rest of the Roughriders. Gillette was hosting Rapid City Stevens of South Dakota for a doubleheader and players were warming up in the batting cages shortly before the first pitch.

But an ordinary day quickly became a very scary moment when Lincoln stepped too close to one of the nets on the batting cages and was struck in the back by a line drive.

“It was just one of those things that just happens so fast,” Nate said. “He’s around our guys a lot. ... He was helping me and a few of our players pick up balls in one of the cages and got too close to the net, and so the line drive caught him square and he was in close proximity when it happened.

“There’s not a lot of meat on him. But I didn’t know how bad it really was when it happened.”

As time went by and Lincoln’s pain continued to get worse, Nate and his wife, Shaely, made the decision to take him to the emergency room. There, a CAT scan revealed a lacerated spleen and internal bleeding.

The staff at Campbell County Memorial Hospital rated the damage to Lincoln’s spleen as a 4 on a scale of 1-5. It was decided that he needed to be taken by air ambulance to the Children’s Hospital Colorado in Aurora for further care.

“When the doctor came in and said, ‘We’ve got a plane and we’ve got to get him to Denver.’ It just kind of hits you quick,” Nate said. “Then they tell you that only one parent can go and it was just a lot of emotions at that point.”

Shaely joined Lincoln in the air ambulance while Nate’s parents picked him up and drove him to Colorado.

It was then the coach said he began to feel guilty.

While it was a freak accident, Nate remembered all the reminders his wife used to give him about keeping Lincoln out of harm’s way at the ballpark.

“The hardest thing for me was thinking about every time I go to the field and Shaely’s saying, ‘Hey, you gotta watch him and keep an eye on him,’ and I’m always saying, ‘Yes, dear, yes, dear,’” he said. “To make that call (to Shaely), the guilt that I felt, it was really a relief to know that he was OK.

“When he got on that plane I really just didn’t know where this thing was going.”

Lincoln spent three and a half days in the hospital. Nate and Shaely could do nothing but wait for the doctors to determine if their son would need surgery.

After being admitted late into the night of April 28, Lincoln was released May 1 without needing an operation.

“It was really a blessing,” Nate said. “Just to get the type of care that we did not only here in Gillette, but from the ER staff to the air medics to Denver to the Children’s Hospital, we had outstanding care for Lincoln.”

The support from medical staff has only been part of the recovery process for Lincoln, Nate said. The Gillette community through social media, phone calls and text messages also helped the family realize just how much they’re supported and loved.

“It sounds cliché, but this is a wonderful place to live and to raise a family,” Nate said. “Going through something like this just reassures you that there’s so many people that care for others. I honestly think that was a big part of his healing, that there was all the extra prayers and thoughts.”

Thinking of all the support the community showed during Lincoln’s time in the hospital makes Shaely emotional as well. As a mother, the incident reminded her of where Lincoln is growing up.

“At the time, it was easily the worst moment of my life as a mom,” Shaely said. “The support is just overwhelming still. The amount of love and prayers and thoughts and gifts and calls, it’s still unending. And it just means the world to you.

“We know how great of a community we live in but it just really hits home when you experience an emergency like we did.”

A big part in bringing Lincoln and coach Perleberg’s other children around the team so much is to expose his kids to quality role models. Being a good ballplayer on the field is only part of what’s required to wear a Roughrider uniform.

Because he spends so much time with the team, Lincoln has people to look up to outside of his family to see good examples of how to be a leader on and off the field.

“All my kids have been there since they could walk and even before they could walk,” Nate said. “The culture and the closeness of the team, it’s just a family atmosphere.”

The news of Lincoln not needing surgery was a boost for all the players on the Roughrider team, said junior Jason Fink.

“I was beyond glad,” Fink said. “Personally, I was praying for (Lincoln) that whole week and I was texting coach Perleberg every day seeing his progress, and when we finally got the news that he got to come home with no surgery, it was like prayers were answered. It was awesome.”

Lincoln has been in the dugout and around the team all four years Kaden Race has played in the program. Race knew that any kid as tough as Lincoln could pull through.

“He’s a tough kid,” Race said. “I think that it was a huge relief knowing that he was well enough to not have to have surgery.”

Both Fink and Race are looking forward to seeing Lincoln’s smiling face sitting next to them in the dugout again, but the 6-year-old will need to rest at home for the next five weeks before he can return to regular activity.

Unfortunately, that includes taking an extended break from his own Little League season. Lincoln plays on the Giants in the farm league of the Gillette Little League, Nate said.

Just as Nate teaches his own players, he also taught his son not to complain about where he plays on the field.

Lincoln will have a checkup this week to reassess when he can return to school. While it may be several weeks before he’s back at Hladky Memorial Stadium, the Roughrider players will be keeping his seat warm in anticipation of their favorite bat boy returning to the lineup.

“I feel like this really showed that we all felt like that was a little brother to all of us,” Fink said. “When he got hurt, it wasn’t just (Perleberg’s) son, but it was like our brother too.”

When he does return, there will be a little more of a careful eye on Lincoln when baseballs are flying around, Nate said. But he’ll still be there to entertain the crowd between the action on the field.

“It’s just always neat to have him there. He’s always smiling and he’s always happy,” Nate said. “He’ll go out and pick up the bat and wave at the crowd. He really hams it up out there.”

Nate and the Roughriders aren’t the only people excited for Lincoln to return to the first base dugout at Hladky Memorial Stadium.

Despite the accident, injury and overall frightening experience, nobody wants to be back at the ballpark more than Lincoln.