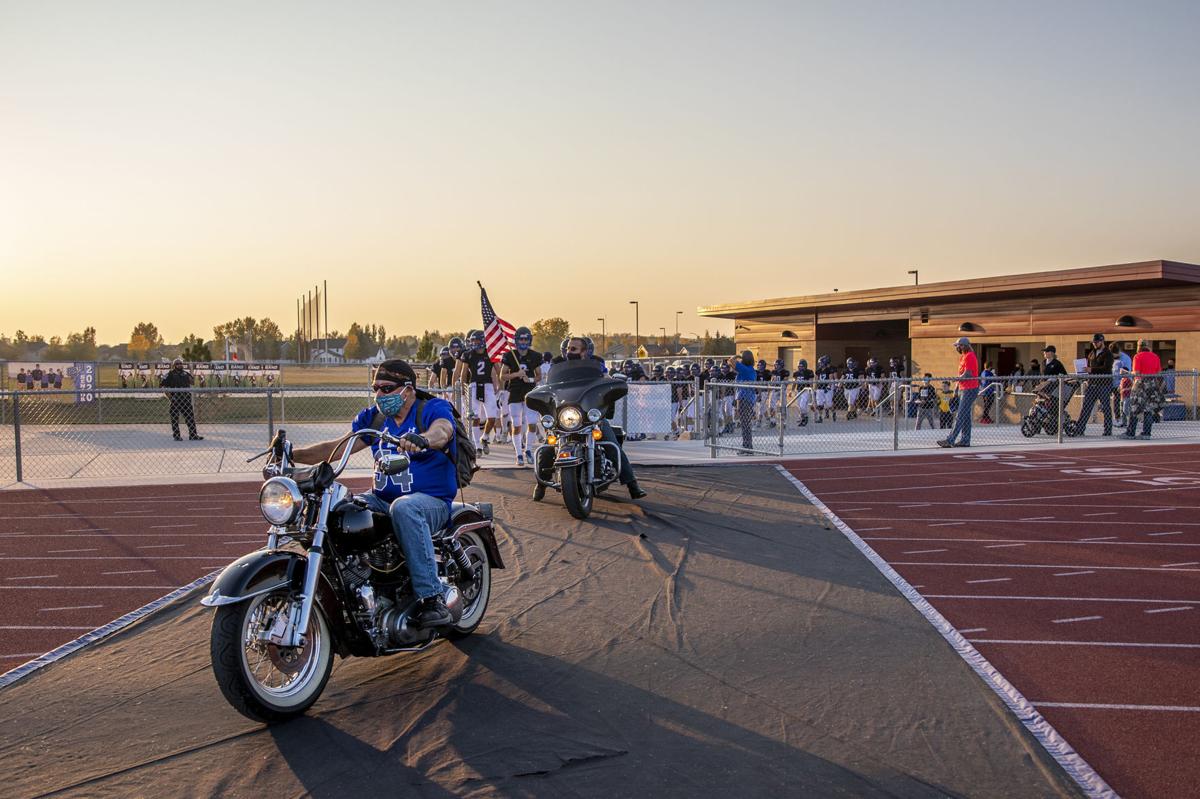 A pair of motorcycles rumble and rev their engines as they lead the Thunder Basin High School football team into their home stadium Oct. 9 for a game against Laramie. Dubbed the Bolt Riders, the bikers are creating a new tradition of revving their engines when the Bolts score. 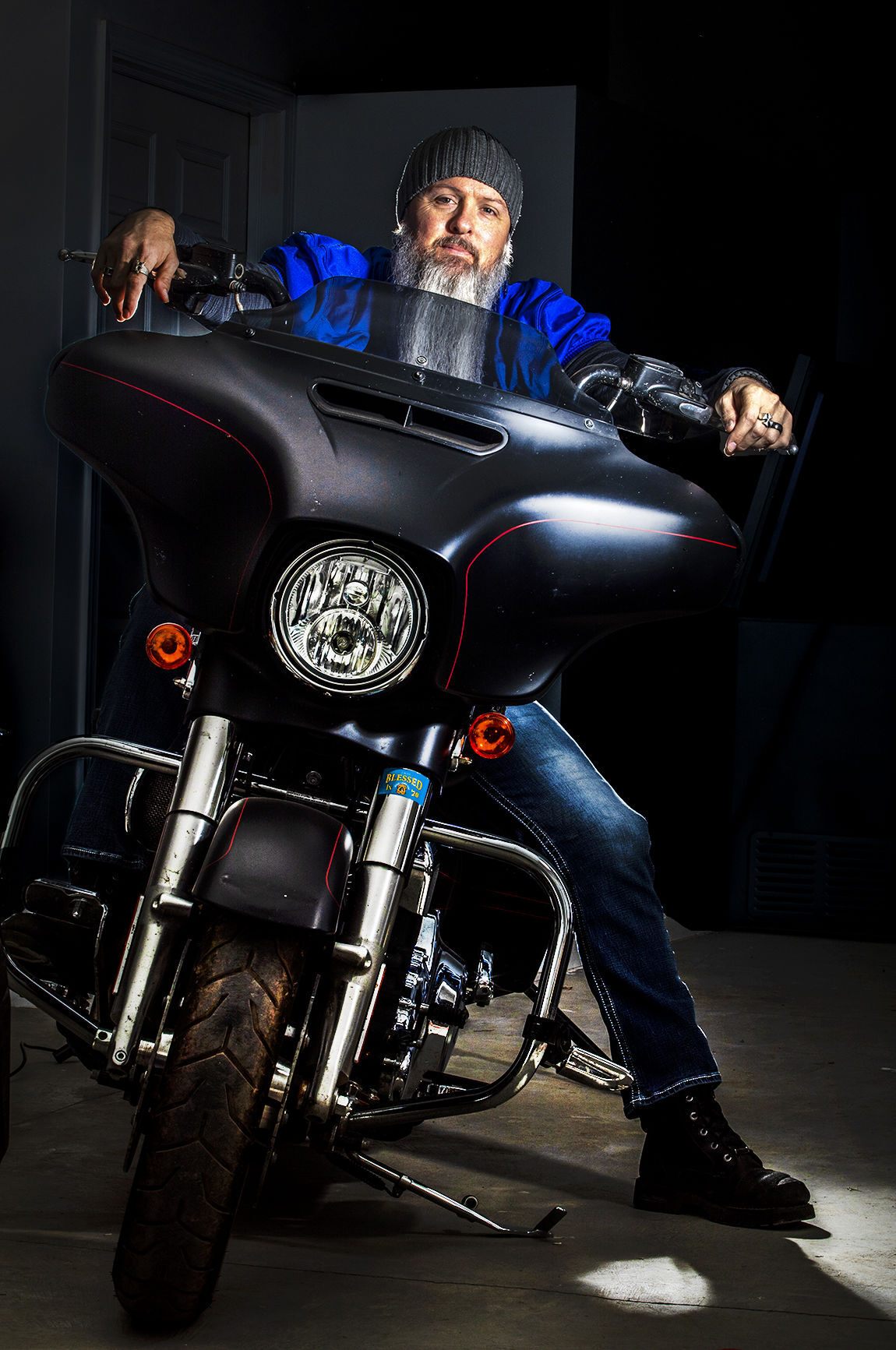 Combining his passions of both Thunder Basin High School football and Harley Davidson motorcycles, last season Ben Rose began a collaboration to start a whole new tradition for the Bolts during home games.

A pair of motorcycles rumble and rev their engines as they lead the Thunder Basin High School football team into their home stadium Oct. 9 for a game against Laramie. Dubbed the Bolt Riders, the bikers are creating a new tradition of revving their engines when the Bolts score.

Combining his passions of both Thunder Basin High School football and Harley Davidson motorcycles, last season Ben Rose began a collaboration to start a whole new tradition for the Bolts during home games.

At halftime of last week’s Thunder Basin High School home football game, the routine was pretty much the same as any other game.

Fans at Thunder Basin Stadium used the break to buy snacks or use the restroom. Officials got a breather from sprinting up and down the sidelines during a 40-7 first-half Bolts blowout of the Laramie Plainsmen.

This season, the Bolts booster has a different halftime routine.

While the teams are in the locker rooms and the scoreboard ticks away until the start of the second half, Rose sits on his idling Harley-Davidson motorcycle at field level behind the Thunder Basin bench. He’s keeping his hog warmed up and ready.

“Firing them when they’re cold is not real good for them,” Rose said. “That’s why you see us during halftime keeping the oil warm by firing the bikes up and having them idle.”

Rose has been a motorcycle guy for a long time, but it wasn’t until last year he began a collaboration with TBHS to create a new tradition for a new football program.

Rose and assistant coach Mike Daniel were longtime neighbors living down the road from each other. Daniel would see Rose cruising down the street on his Harley, which gave the football coach an idea.

“He wanted to do something special, similar to what the (Campbell County High School) Camels do with their cannon that fires when they score,” Rose said. “He thought it’d be a good idea to get Harleys and have them fire up and rev when Thunder Basin scored.”

Since Rose was the only Harley guy Daniel knew at the time, he asked his neighbor about bringing his motorcycle to the school’s home games to help build to the intensity at Thunder Basin Stadium.

“I said if you get permission to do it, I’ll be interested and he said, ‘Good, because you’re going to head it up,’” Rose said.

This is the first full season for Rose and the Thunder Basin Bolt Riders. While he and a handful of other bikers attended one home game last year, this year has all but solidified the motorcycles and their noise as a staple of Thunder Basin football.

“It’s about the team and the guys playing and it’s about the school,” Rose said. “Essentially, what we’ve done here is take a bunch of big bikers and turn them into cheerleaders. That’s what we are. We’re big cheerleaders.”

The Bolt Riders originally wanted to fill the entire sideline with motorcycles, but because of the COVID-19 pandemic, the school has limited the group to five bikes per game.

The group has grown enough to rotate availability on game nights, Rose said.

While being loud and making noise is fun for Rose and the Bolt Riders, safety is the No. 1 priority.

“Obviously, I don’t want anybody who’s going to showboat on the motorcycle or on the turf,” Rose said. “It’s not like we’re at Sturgis where you have to rev up really, really loud. There might be some poor little kid behind you that is literally going deaf because of what you’re doing.”

The Bolt Riders escort the Thunder Basin football team onto the field. Then, their job is to rev their engines and be ready for another Bolts’ touchdown. It’s also helped pump some noise and enthusiasm into a 4,000-seat stadium that’s capped at 1,000 fans because of the pandemic.

Rose and the rest of the group are open to criticism, he said. If the bikes are too loud or are a distraction for fans or the opposing team, Rose said he is open to making adjustments.

But all the feedback about the Bolt Riders so far has been positive.

“It seems to add to the excitement and it keeps people engaged in the game,” Rose said. “I was so concerned the first game we did this because my bike is pretty loud. I’m aiming my pipes right at the stands and I was so worried about someone not liking what we’re doing and complaining that it’s too loud.

“We really haven’t gotten any of that thus far. We wanted to be very respectful of the field and the fans because we want to continue to do this. It’s about the kids and I want to be able to keep them pumped up when they score and keep them moving forward.”

Thunder Basin and the Bolt Riders have developed a new mantra they’d like printed on T-shirts going forward: “Run the bikes out of gas.”

The slogan was nearly a reality for Rose a few weeks ago when Thunder Basin put up 64 points at home against Cheyenne South.

“I usually tell the guys now that are coming in to make sure they stop at the gas station and fill up the tank,” Rose said.

His gig as the organizer for the Thunder Basin Bolt Riders has granted him an up close and personal view of the game.

Unfortunately for Rose, the view of the field from his Harley is mostly blocked by the Thunder Basin players on the sidelines.

“Some of those boys are huge, so I’m usually sitting at one of the 40-yard lines or the 50-yard line so I’m sitting right behind where everybody is standing,” Rose said. “I’m 6-2, so I can see OK, but sometimes it’s hard to see when they score so I actually have to pay attention to the scoreboard so I know when I need to fire up and rev.”

Rose graduated from Campbell County High School in 1994 and will always declare himself a Camel. But he said it’s also rewarding to be part of a new program like Thunder Basin. They’re both Gillette and both his hometown.

“I will show up until they tell me not to,” Rose said. “Thunder Basin hasn’t been around that long, but it’s fun to be a part of something new coming up. I don’t see it not continuing just based on what we’ve been able to do thus far.”