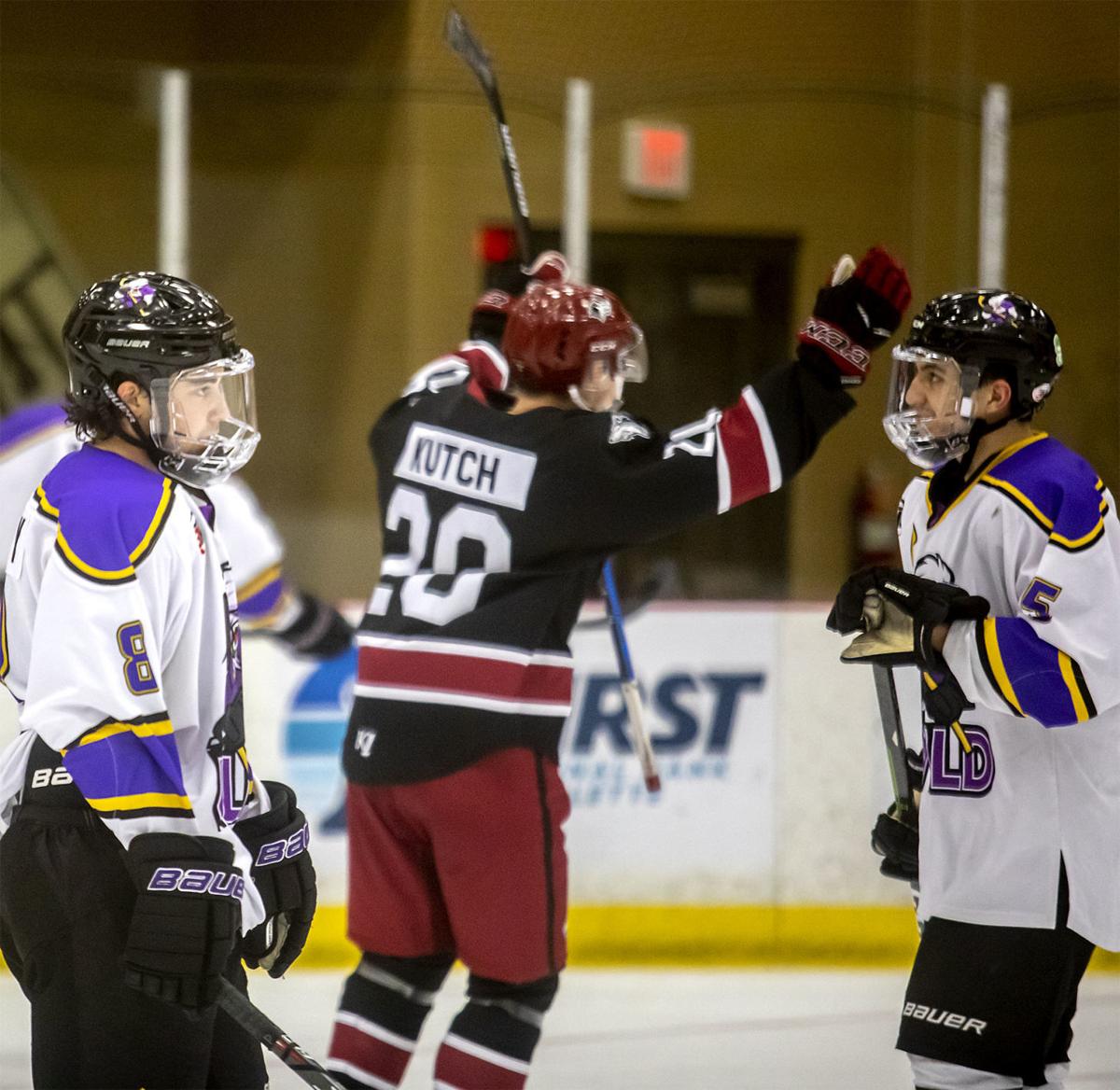 The Bozeman Icedogs Will Kutch celebrate a goal against the Wild in the third as they come back from 2-0 deficit to win 6-3. 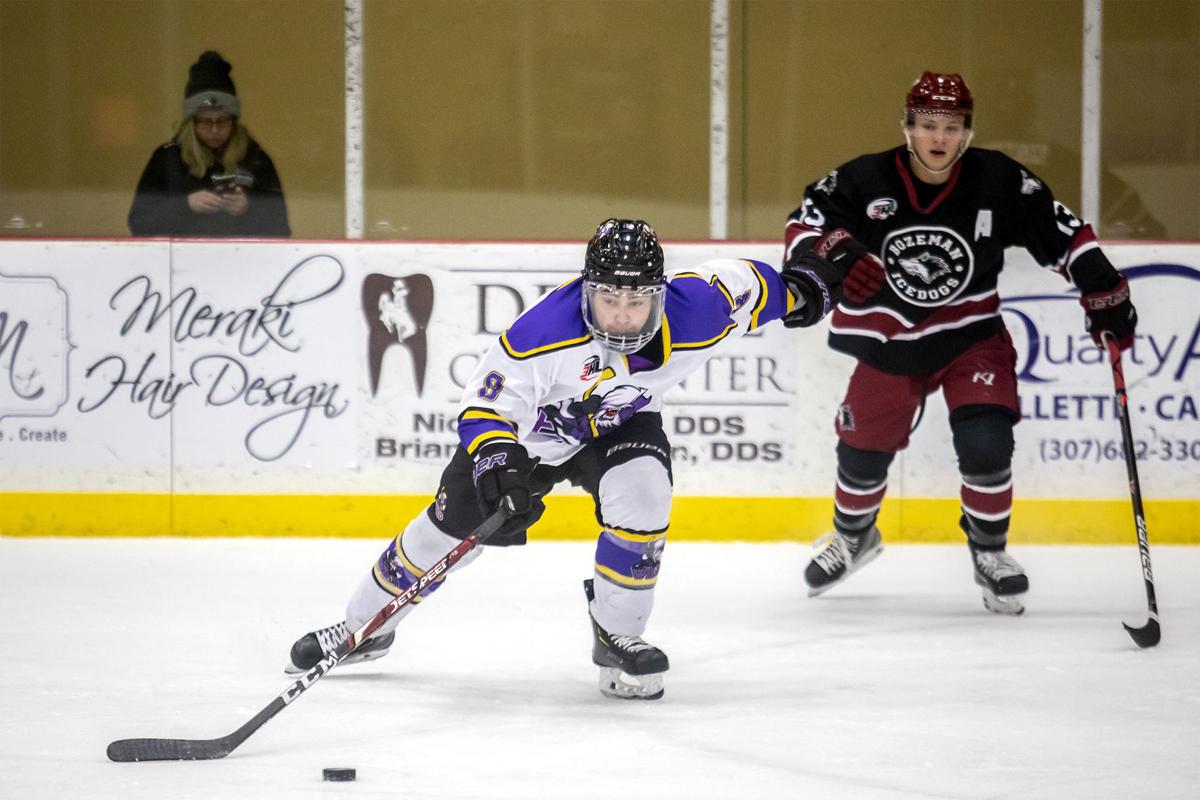 The Wilds' Keedin Denny moves the puck down the court in their game against the Bozeman Icedogs on Friday. 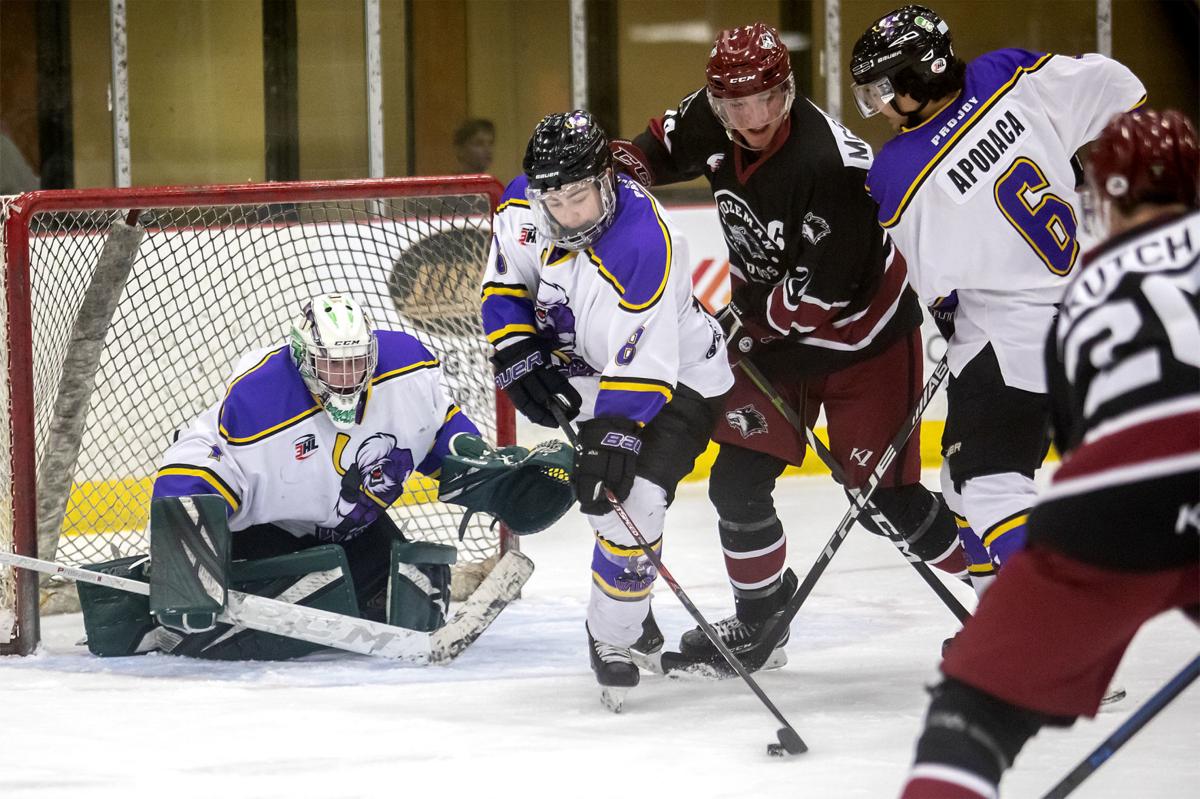 The Wild's Keedin Denny works to keep the puck away from the Wild's goal in Friday's game against Bozeman.

The Bozeman Icedogs Will Kutch celebrate a goal against the Wild in the third as they come back from 2-0 deficit to win 6-3.

The Wilds' Keedin Denny moves the puck down the court in their game against the Bozeman Icedogs on Friday.

The Wild's Keedin Denny works to keep the puck away from the Wild's goal in Friday's game against Bozeman.

The Gillette Wild have gotten into a habit against the Bozeman Icedogs.

In each game they’ve played with the Icedogs, they take a 2-0 lead, and then they let up.

On Friday night’s first game of the weekend series with Bozeman (22-2), Gillette went into the third period leading 2-0. In the third period, the Wild (14-10) were out-scored 6-1, and dropped the game 6-3 at Spirit Hall Ice Arena in Gillette.

It marks the third game with the Frontier Division-leading Icedogs this season, and the third loss after taking a 2-0 lead to start the game.

“We had all the momentum going into the third period,” Wild coach Taylor Shaw said. “Penalty trouble hurt us. We took some penalties there, and they ended up back in our net. And we didn’t do a job in our own zone.”

Leading 2-0 going into the final frame, the Wild’s Jacob Kaminski and the Icedogs’ Luke McCay each took a coincidental slashing penalty at the same time. The 4-on-4 play led to two Bozeman goals — the first from forward Hazen McKay and the game-tying goal from Brock Finn three seconds after time expired on the coincidental penalties.

“We got complacent, and instead of playing man-on-man hockey, we tried to watch somebody else do our job for us,” Shaw said. “When all four guys aren’t on the same page, it doesn’t work.”

Then at 11:57 to play in the third period the Wild went on the penalty kill, and Bozeman forward Will Kutch buried a goal five-hole on Wild goaltender Rory Dumelie, who was playing in his first game with the Wild. The power play goal put Bozeman ahead 3-2. It was Bozeman's first lead of the game, with just over 48 minutes played.

Bozeman’s Duncan McGarrah scored less than a minute and a half later, and then Wild captain Ethan Becker took his fourth penalty of the night. Bozeman capitalized on the advantage, and increased its lead to 5-2.

The Icedogs scored four of their six goals when the teams were playing out of 5-on-5 hockey.

“It’s not our kill. our kill’s fine. It’s the penalties that we take that are stupid,” Wild forward and leading scorer Declan Young said. “Half of them, if we just move our feet it’s not a penalty.”

The Wild cut the deficit to 5-3 on the power play when forward Declan Young shot into teammate Tyler Kaminski’s skates in front of the net. Kaminski deflected the puck under Icedogs’ goalie Conan Hayton to bring the Wild back into the game.

The Icedogs scored the final goal of the game on an empty Wild net, when the Wild were on a power play, at 2:04 left to play in the game, and took a 6-3 victory over the Wild.

“We didn’t play for a full 60 minutes. We only played for like 42,” Young said. “They capitalized on their chances and we didn’t.”

Young practiced with the North American Hockey League’s Bismarck Bobcats, a Tier II team, earlier in the week, but returned to the Wild on Wednesday night, he said.

“I thought he played really well, we just didn’t give him any help,” Young said.

Becker added, “We let him down in the third period.”

Two Bozeman players — Luke McKay and Christian Veneruzzo — were ejected from the game for unsportsmanlike conduct in the third period.

Wild head coach Steve Kruk has one more game left to serve on his four-game suspension, which he received after being thrown out during a game  with the Yellowstone Quake.

When the Wild went to Bozeman for a two-game series earlier in the season, the Wild took 2-0 leads in each game before losing each 5-3.

“Just do what we did in the first and second period, and do it the whole game,” Becker said about how to end the series 1-1.