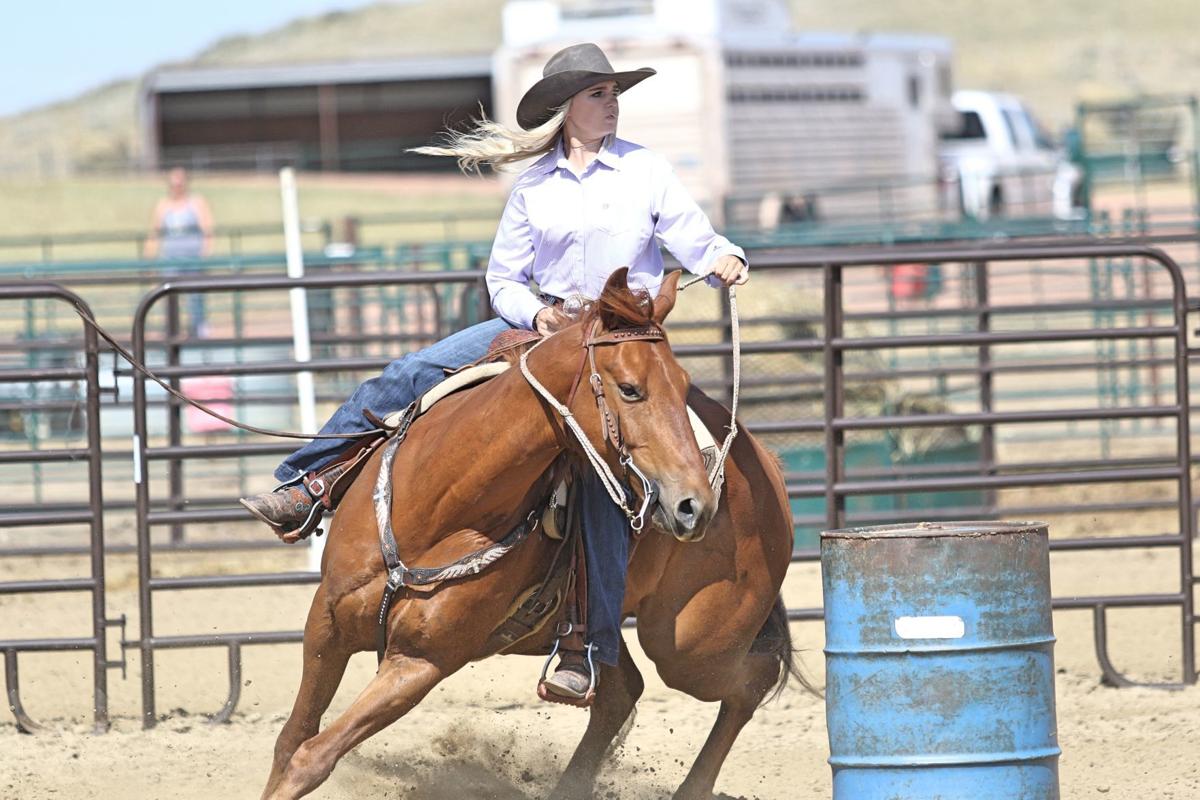 High school sophomore Ashlyn Goven whips around a barrel during a practice at her family’s arena at their home in Rozet. She’s preparing for her first National High School Finals Rodeo. 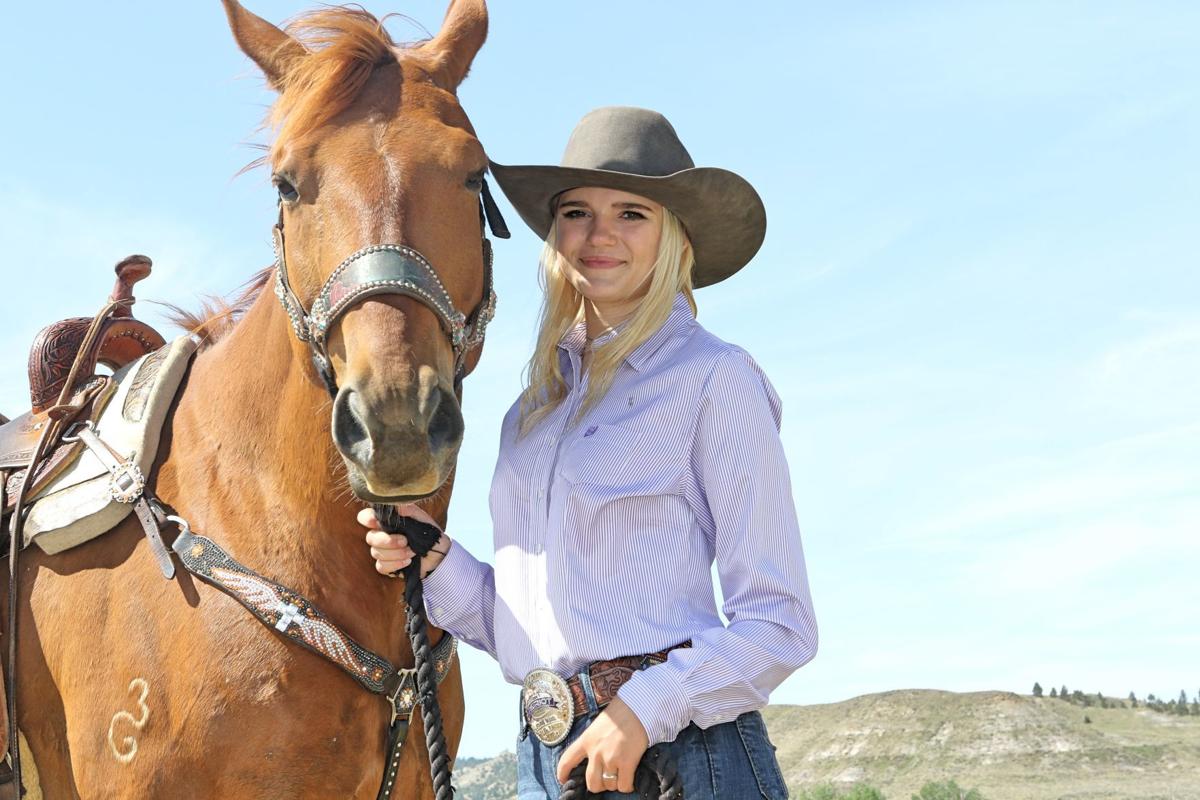 Ashlyn Goven stands on the horizon with her 9-year-old horse, Irish. Goven is going into nationals as Wyoming’s third-ranked barrel racer. 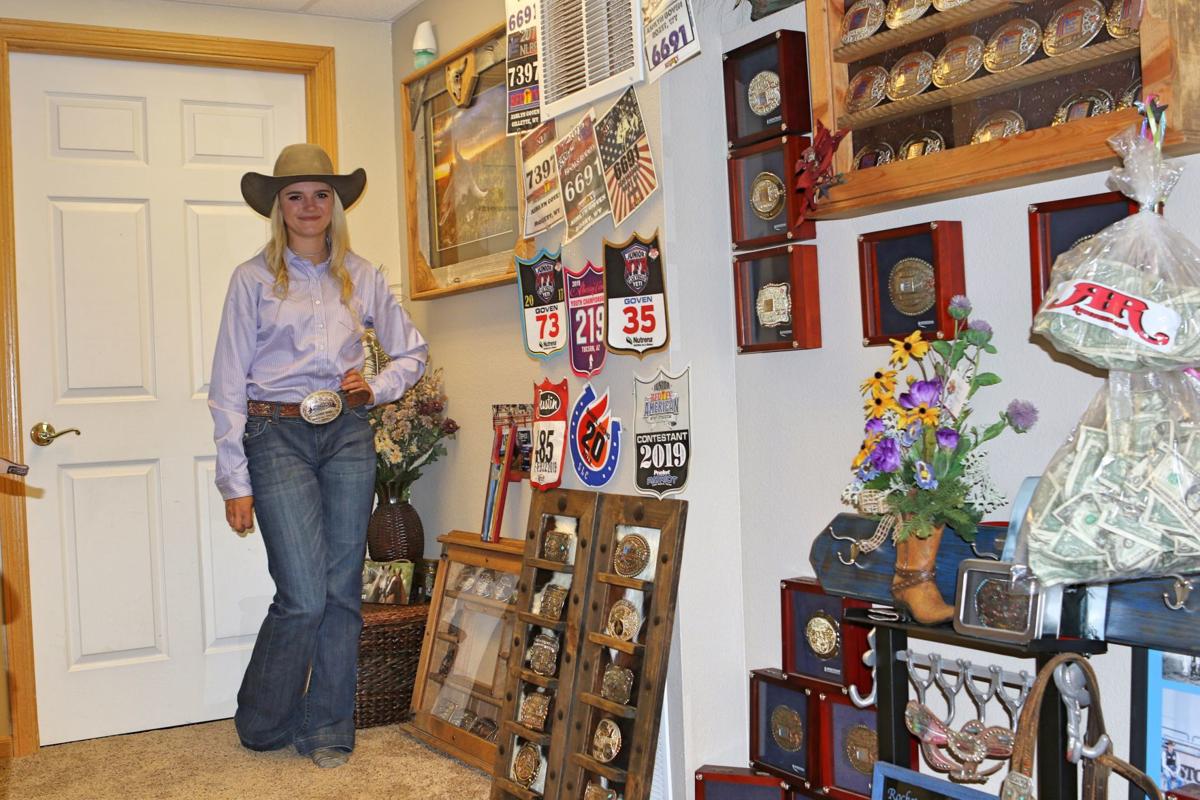 Ashlyn Goven stands by her collection of buckles and other prizes won with rodeoing. 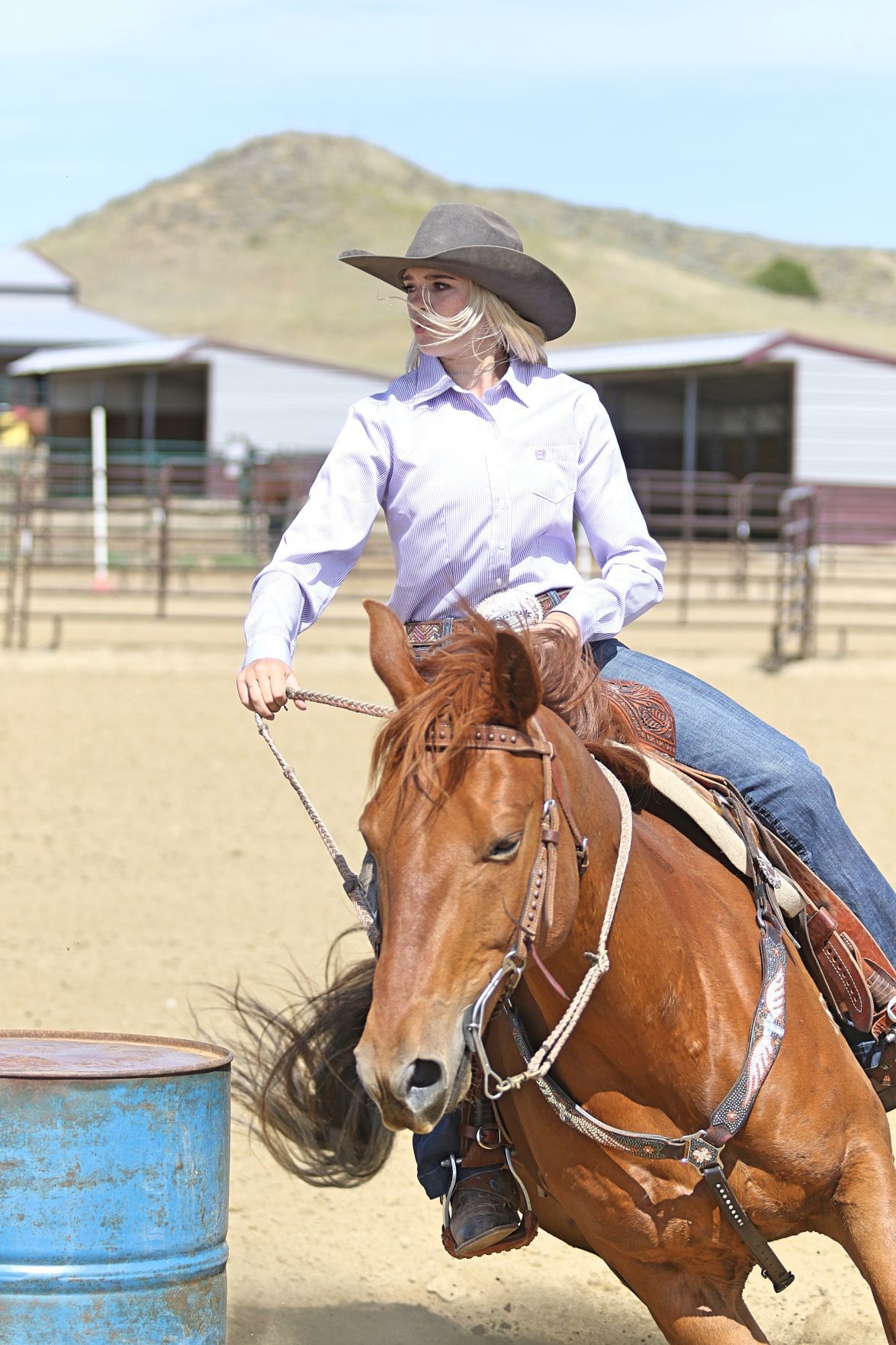 Sophomore Ashlyn Goven whips around a barrel during a practice at her family’s arena at their house in Rozet.

High school sophomore Ashlyn Goven whips around a barrel during a practice at her family’s arena at their home in Rozet. She’s preparing for her first National High School Finals Rodeo.

Ashlyn Goven stands on the horizon with her 9-year-old horse, Irish. Goven is going into nationals as Wyoming’s third-ranked barrel racer.

Ashlyn Goven stands by her collection of buckles and other prizes won with rodeoing.

Sophomore Ashlyn Goven whips around a barrel during a practice at her family’s arena at their house in Rozet.

Much of Ashlyn Goven’s house is a shrine to her rodeo career.

In the living room, her two Little Britches world champion saddles sit on either side of a flat screen TV, but the most impressive collection of memorabilia is in the basement.

Thee are more championship saddles, multiple framed glass cases of prize buckles and even a framed cover of an issue of “Wrangler” magazine where she was the cover athlete.

Goven, a high school sophomore from Rozet who has qualified for the National High School Rodeo Finals, was basically born into the rodeo scene. Her mother Jessica was still barrel racing when Goven was born and she attended her mother’s events for a few years as a baby.

Even if she wasn’t aware that her mother was tearing through the arena at the time, the rodeo culture became hers. By the time Goven was coming up on her 4th birthday, she was already riding a horse by herself.

Goven started competing in the National Little Britches Rodeo Association when she was 8 her bloodlines quickly took over. It took a lot of work, but she also admitted riding was something that just came naturally.

“My mom was barrel racing when I was born. It was something she did and I just joined in with her,” Goven said. “The older I got, the more attached I got to the sport.”

Once her mom stopped rodeoing, her impact on Goven’s own rodeo career became more prominent. She started training young horses and then Goven would practice and compete on them.

Goven has always loved horses, which is almost a requirement for how much she works with them. By the time she started high school, Goven was working with about 10 horses a day. Her dad, Matt, said she was born with the passion for the animals.

“She always loved the horses, but you didn’t know where it would go,” Matt said.

The setup at Goven’s house has also played a big factor in her progression. In the time it takes many people to walk from their front porch to their car, Goven would already be at the gate of her family’s private arena.

“I can really practice whenever I want. I have the setup for it,” Goven said. “I try to ride horses every single day. Depending on how many I ride, I’m outside about eight hours a day riding horses and messing with them.”

Rodeo at a different level

Goven is going into nationals as Wyoming’s No. 3 barrel racer in her first year of high school rodeo. She previously competed in Little Britches and then in futurity rodeos for the past couple of seasons, where the prize money is a lot bigger and the competition has no age limit.

Goven has been competing against some of the top competition anywhere and qualified for large rodeos in Green Bay, Wisconsin, and Salt Lake City. The Days of 47 Cowboy Games in Salt Lake, which only has eight qualifiers for the long go and two for the short, was held in front of one the biggest crowds Goven has ever seen.

“I am so grateful to be able to go to such big events. The first one I ever went to, the crowd was crazy and I was focusing on all the people,” Goven said. “I was like, ‘Oh, my goodness.’ But the more I went to, I was able to focus more on my stuff and just be prepared instead of paying attention to everything else.”

Goven’s ability to control her mindset and nerves has been one of the largest steps forward she has taken. She said her horse knows exactly what to do when he’s whipping around the barrels and usually the mistakes come from her.

“My horse knows his job great. It’s just if I can remember how to do everything,” she said.

Goven’s barrel horse is a 9-year-old gelding named Irish. She said Irish is primed and ready to go for the NHSFR, which starts July 18.

The 2020 NHSFR, which for a short time had a chance to be held in Gillette, will be in Guthrie, Oklahoma. Fortunately, Goven has already rodeoed there in the past, plus she was there almost three weeks before the rest of the high school rodeo contestants.

Goven still competes in Little Britches, which she can do until she’s 18, and the organization’s nationals starts Tuesday — also in Guthrie. She is qualified for six of the seven events and her dad said the competition level is pretty consistent with that of the NHSFR.

Goven and her family are already making plans to deal with the 100-degree heat in Oklahoma.

One of the things she said will help the most is pasturing their horses at a ranch near the Lazy E Arena, which is much easier on a horse than a hot stall.

“That takes so much stress off them, being able to roam around,” Goven said. “It takes a lot of stress off me, too.”

Another factor of a new venue that can play havoc is the water. Sometimes horses will refuse to drink water in unfamiliar places, but Goven doesn’t expect that to be much of an issue.

All the horses she is bringing to Oklahoma have traveled far and wide around the U.S. The Govens also bring a formula called Zesterra, which they can squirt into their horses’ mouths to boost water consumption and appetite.

A lot goes into keeping a horse healthy and ready for competition. But in essence, they’re a lot like their human counterparts — just much faster and stronger on their four powerful legs.

“They’re just an athlete, just like in any sport. Some days are better than others,” said Ashlyn’s father, Matt. “All we do is try to make sure they’re ready to do their thing.”

Goven said that there are days Irish is a bit lazy and tough to deal with, but she can always tell when he’s rearing to go. That happens at most of the big events that Goven competes in and she knows the loud crowds and music fire up Irish as much they do for her.

“At finals, they’ll be playing loud music, so he’ll be ready to go,” Goven said. “(The horses) do feed off the atmosphere and the energy of the rider.”

With two arenas, video boards and television cameras, the NHSFR is the largest outdoor rodeo in the world — usually host to more than 1,500 contestants. But Goven knows exactly how it feels to ride a sprinting horse into an arena full of screaming fans.

Goven said she’s been rodeoing almost every week to get ready for nationals, despite the high school spring season being canceled because of the coronavirus pandemic.

“This past month and a half to two months have been really busy,” Goven said. “I don’t think we’ve had a weekend off from barrel racing, so I think we’re pretty prepared coming into (nationals).

Goven’s key to success at nationals is not putting too much pressure on herself and making the runs she knows she can. It’ll take two near-perfect runs to make it into the short go and then an even better final performance to place high.

Goven already has four world championship saddles displayed in her house from Little Britches, along with countless other awards framed on the wall in her basement. But this is her first year of high school rodeo and now she wants to add more hardware to the collection.