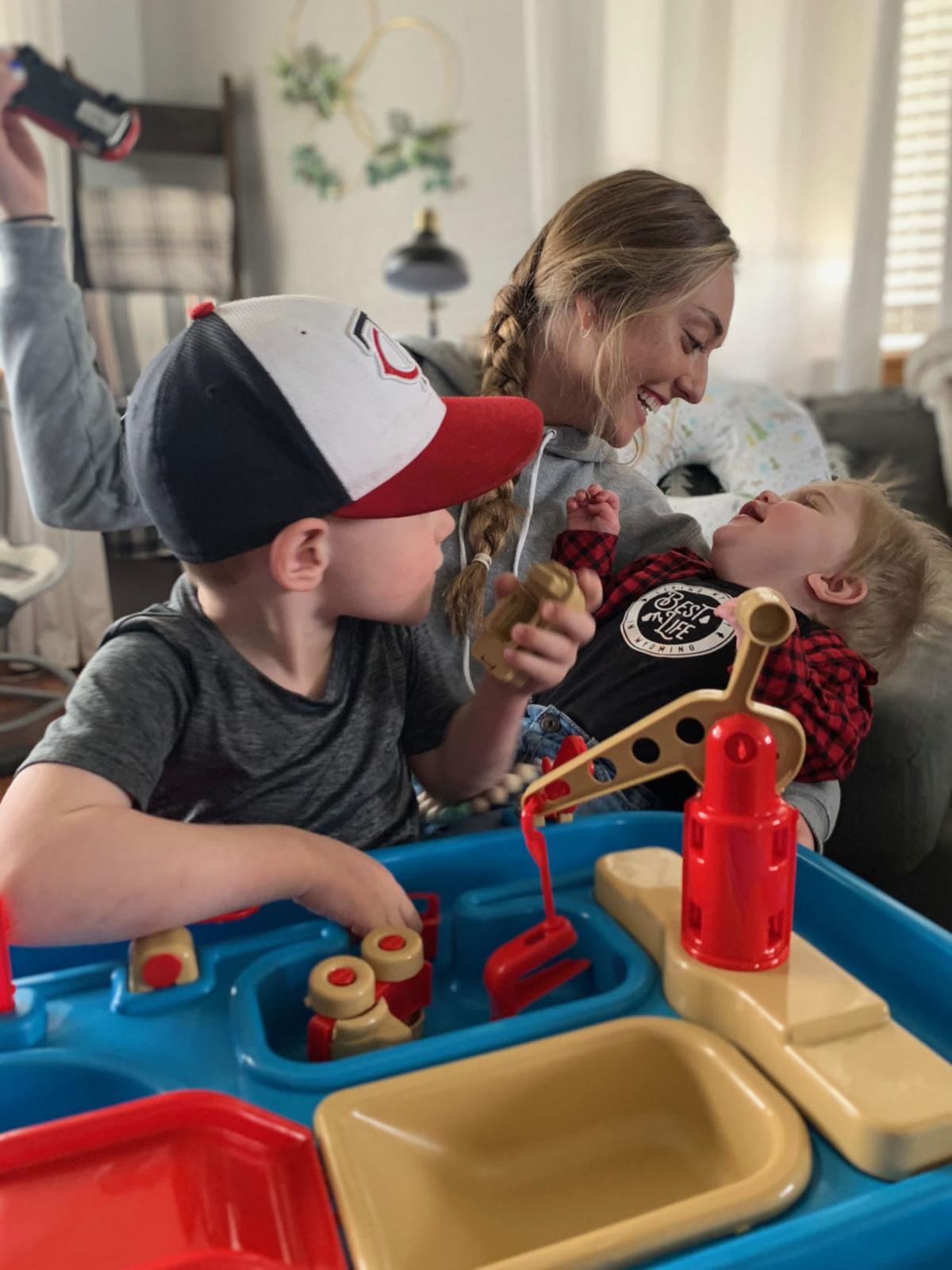 Thunder Basin High School senior Chastin Nelson plays with her nephew Layten, while her other nephew Beckham watches. Nelson’s family time has increased with schools being closed, along with high school sports and activities. 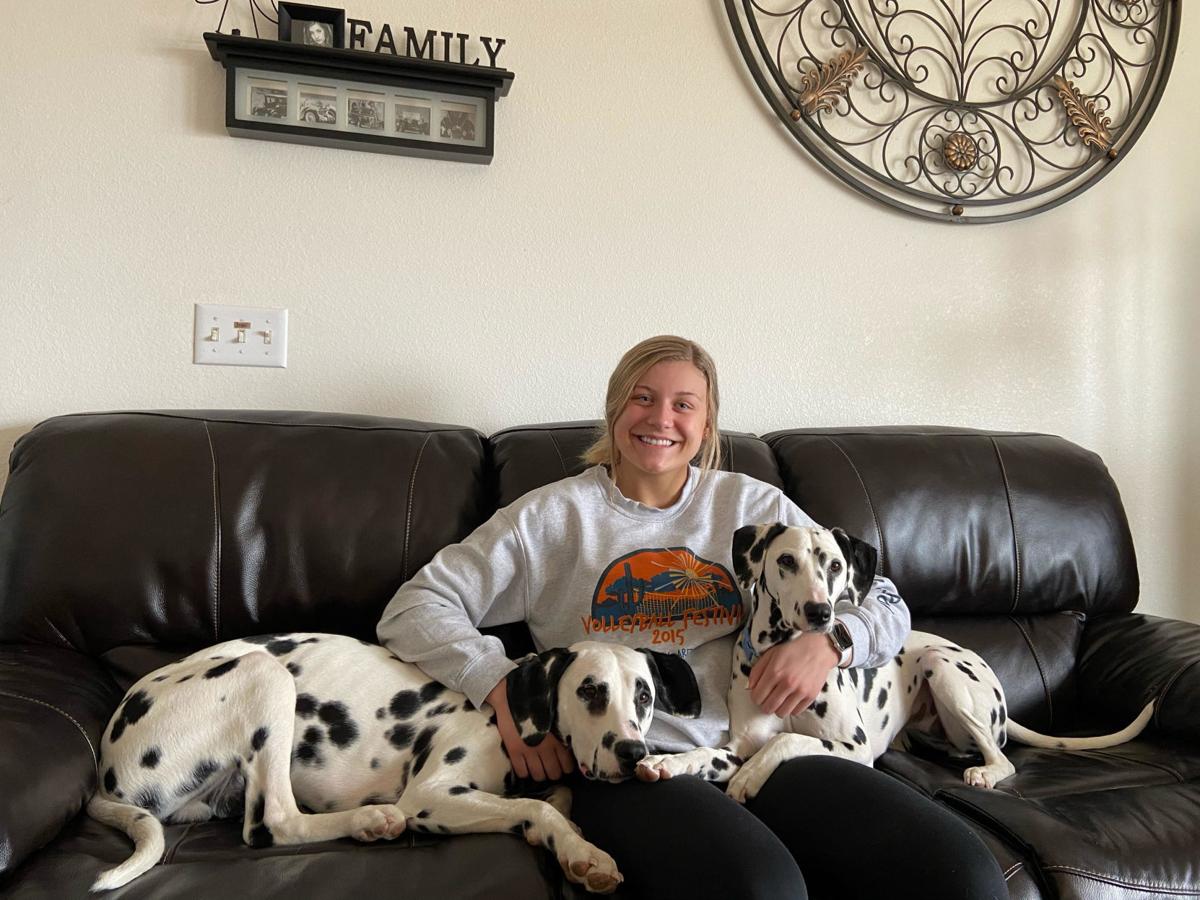 Thunder Basin senior Angela Youngs sits on her couch at home, spending quality time with her dogs Watson, left, and Luna. As public schools are closed, Youngs said she’s had to get creative to pass the time, including counting the spots on the Dalmatians. 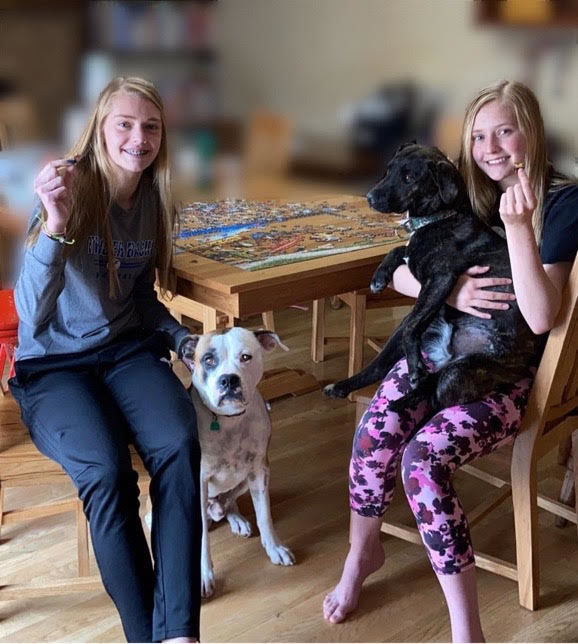 Thunder Basin junior Elsa Clark, left, and her little sister Eagan work on a puzzle at home, while their dogs, Grizz, left, and Ziva stick close. 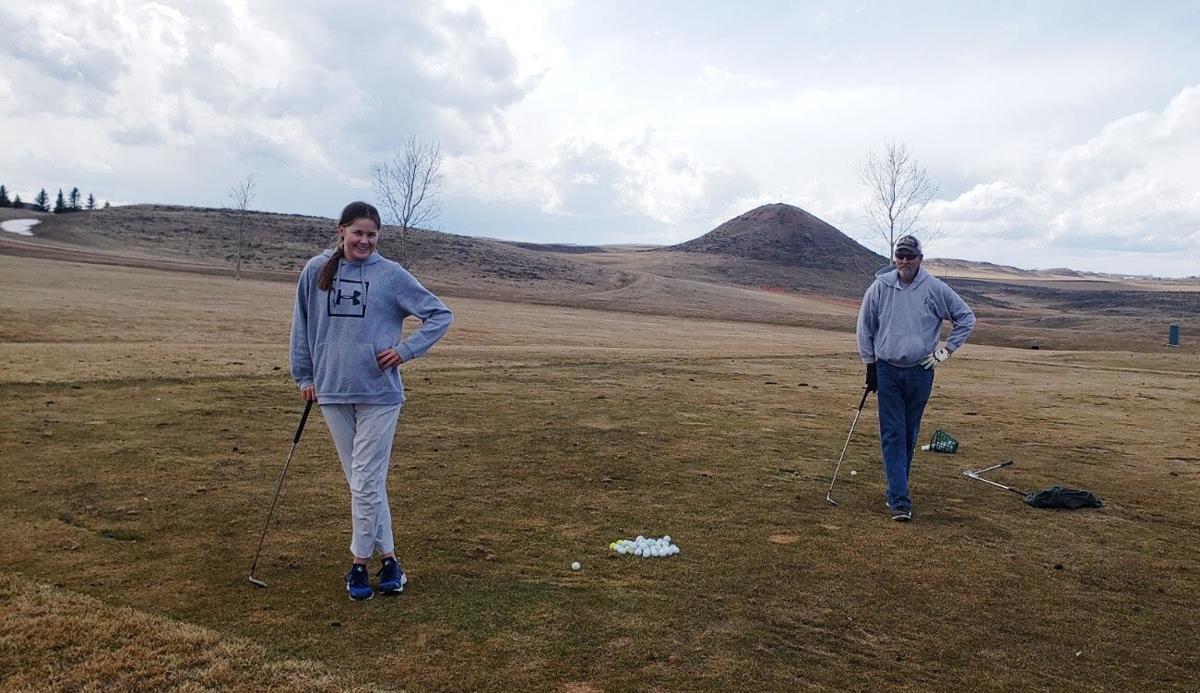 Thunder Basin senior Rigan McInerney is not a fan of some of the extra chores she now has time for while being stuck at home during the COVID-19 pandemic.

Thunder Basin High School senior Chastin Nelson plays with her nephew Layten, while her other nephew Beckham watches. Nelson’s family time has increased with schools being closed, along with high school sports and activities.

Thunder Basin senior Angela Youngs sits on her couch at home, spending quality time with her dogs Watson, left, and Luna. As public schools are closed, Youngs said she’s had to get creative to pass the time, including counting the spots on the Dalmatians.

Thunder Basin junior Elsa Clark, left, and her little sister Eagan work on a puzzle at home, while their dogs, Grizz, left, and Ziva stick close.

Thunder Basin senior Rigan McInerney is not a fan of some of the extra chores she now has time for while being stuck at home during the COVID-19 pandemic.

With athletes around the globe going stir crazy in their homes, the Thunder Basin High School volleyball team has found a way to band together and play the game of “pepper” — even if it is through virtual means.

Coach Wenett Martin got the idea when she was talking to a colleague who told her about his team playing “virtual pepper.”

Martin said she didn’t understand at first how the players could do the warm-up exercise where they hit a volleyball back and forth. But the more she heard about the idea, the more she liked it.

Pepper is a game that volleyball players often play while warming up. Usually done with two people, they players alternate bumping, setting and spiking the ball to each other.

But none of that has been possible with schools closed for COVID-19 precautions and the players being stuck at home. Martin envisioned all of her players playing pepper by themselves, recording it and then sending their videos to her to edit into a final video.

She gave them 24 hours, but it didn’t take nearly that long for the videos to start streaming into the team’s group text.

“The kids were excited about it,” Martin said. “I know I’m bored and I think the kids are bored too, because they got the videos to me pretty quickly.”

With all the players included in the group text, they got a notification when each video was sent and received. Senior Angela Youngs said she went through and watched each one, laughing all the while.

“It was a lot of fun to make, especially with all of us stuck in our houses,” Youngs said. “It was fun, because most of us were in our pajamas and stuff. It was good to see us doing something.”

Youngs said she might not have read the initial text from Martin right, but she didn’t know what all the videos were meant for at first. However, when she saw the finished product, she loved it. When edited, each player seemed to receive a ball from a teammate, then hit to another.

It gave the Bolts something fun to do together, but they also wanted to send a creative message to a community that’s going through the same uncertainty.

“I think it sent a good message,” Youngs said. “Even though we’re apart, we can still have fun and do stuff together while being safe and healthy.”

The text in the first frame of the video reads, “How to be together when we can’t be together?” before cutting to one that says, “The coronavirus volleyball pepper.”

With the song “Mr. Blue Sky” by Electric Light Orchestra playing, the players recorded themselves bumping, setting and spiking the volleyball to themselves — some in their living rooms, others in their driveways or backyards.

Since the video came out Tuesday, coaches around the state have emailed Martin to show how their teams have done similar videos.

The TBHS girls soccer team also liked the idea and Martin helped that team make its own video. She plans to keep reaching out to teams at TBHS to see if they want to do the same.

“We just want to try to reinforce with our community that (message of), ‘Hey, stay home. You can still have fun,’” Martin said.

Taking social distancing seriously comes with its sacrifices. For athletes, not going to the gym is constantly nagging at them, but the TBHS volleyball team has found some fun ways to pass the time.

Senior Chastin Nelson has two nephews she said are “growing before our eyes.” If anything, the time at home has allowed her to grow her relationship with them, which is something she said she couldn’t do during volleyball season.

Family time is a plus side to school being out, but Nelson also said it’s been “irritating” to be at home thinking about all the events the seniors might miss, like graduation.

“It’s been a drag that way,” Nelson said. “And then finding stuff to do has been a challenge, too.”

Fortunately for Nelson, her sister Tessa and her husband, Conrad Downey, have a home gym in their garage. That access has allowed her to start the spring training program that was sent by her future coach at Sheridan College.

She also runs around the neighborhood frequently, but it’s just not the same as actual training and playing volleyball.

“We’re always talking about getting back in the gym together,” Nelson said about keeping in contact with her teammates. “We’re like a family, so it’s just weird not being around each other.”

This is the time that volleyball players are trying out for their AAU teams. Since Nelson has aged out of the high school division, she was going to help coach some of her teammates from this past season.

Now she can add that to the list of unknowns.

Freshman Joelie Spelts, who jumped onto the varsity scene in her first season as a Bolt, was going to be one of the promising players on the AAU team this offseason.

Spelts said she made the most improvement she ever has last summer playing for Martin’s AAU team leading up to her freshman year. Spelts and every AAU player across the country are wondering if their offseason progression might take a big hit.

On top of that, the prospect of being away from teammates for that long is one that players don’t want to face.

“I really miss volleyball, so with AAU I was really looking forward to playing and hanging out with the players,” Spelts said. “During practice and stuff, we see each other every single day. You kind if take it for for granted.

“And when we do see them again, it makes you realize how much you miss and love them.”

As for her life at home, Spelts actually enjoyed the break at first, but that didn’t last long.

“The first couple days it was nice, because it was like a break from school,” she said. “But now I’ve pretty much done everything I can possibly do around my house. So now its just repetition and kind of boring.”

Spelts has managed to escape the confines of her home in the last couple days, though. The weather has been nice enough to dust off the clubs and she and her grandpa, Tom Schrupp, have been spending some time hitting golf balls.

Spelts is still trying to come up with new ways to spend time with family, even people out of town. Farkle, a popular dice game, is a favorite in her house, but she was actually making plans Friday night to play it over FaceTime with her aunt in Denver.

“It gets pretty intense,” Spelts said. “We haven’t done it over FaceTime yet, but I bet it’ll be just as fun.”

In many households, there are some who are going through the COVID-19 scare even happier than before — the dogs. Junior Elsa Clark has two who both are coming off recent surgeries and now get unlimited attention.

Clark and her sister have been building “very hard, frustrating” puzzles, as their dogs stick by their sides. Youngs turned her two Dalmatians into a form of entertainment and said she and her family have counted every spot on each of them.

Others, like senior Rigan McInerney, are knocking out their spring cleaning. However, McInerney did admit the main reason for cleaning was because it’s “way more fun” than doing homework for her online college classes.

Stuck at home, itching to play sports and see friends, is frustrating for student-athletes around the United States. But the Bolts are good examples of how to turn a negative situation into a bearable one.