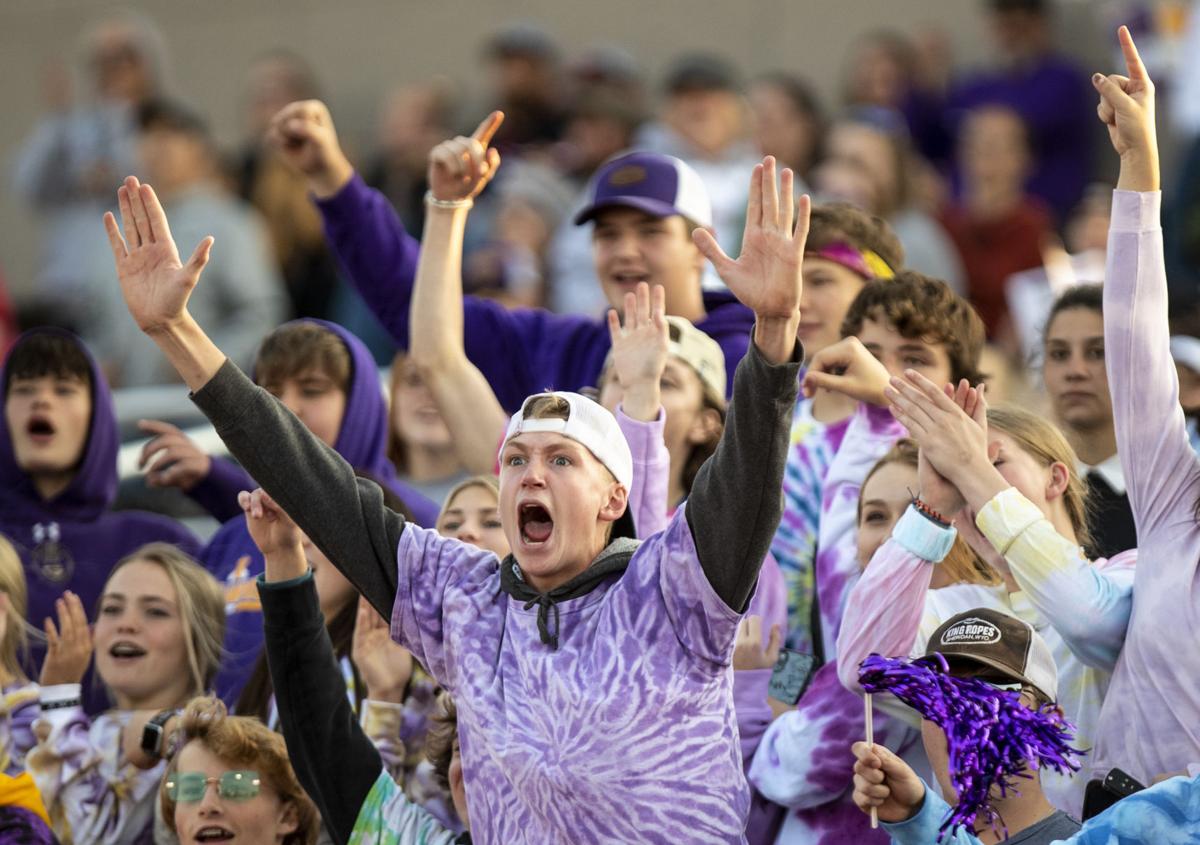 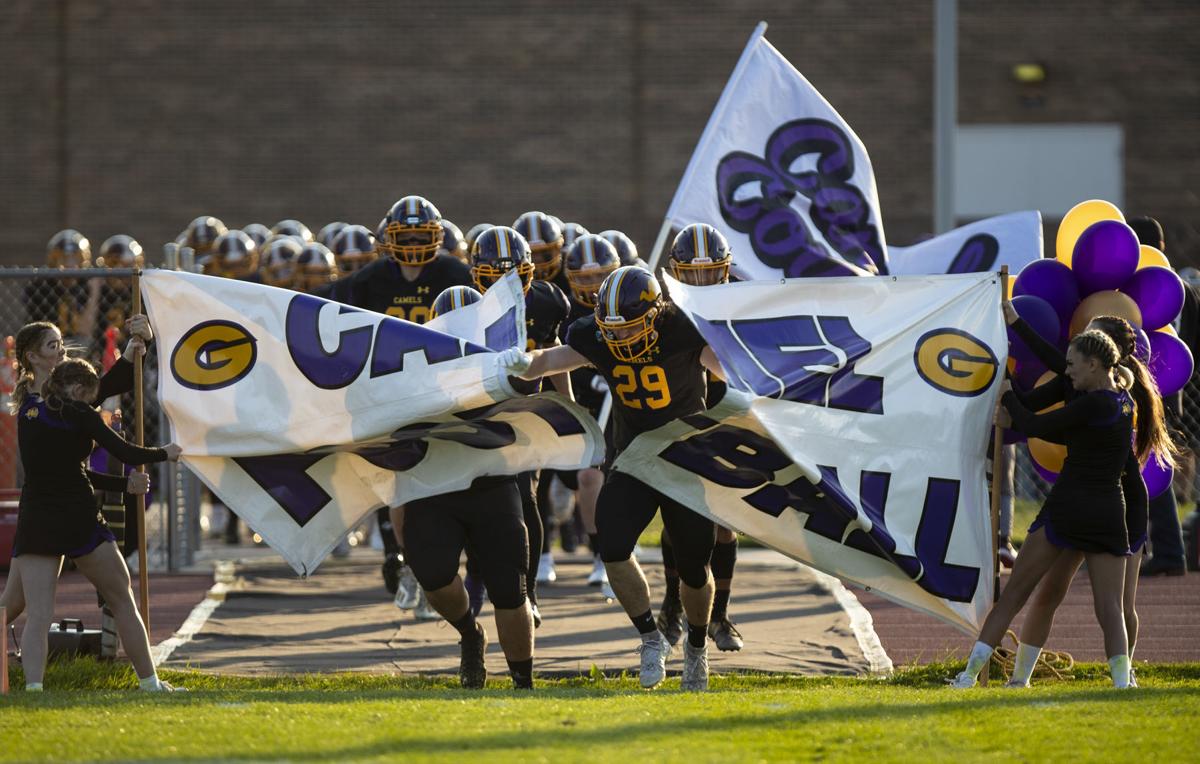 The Camels take the field before playing Cheyenne South for homecoming earlier this season. 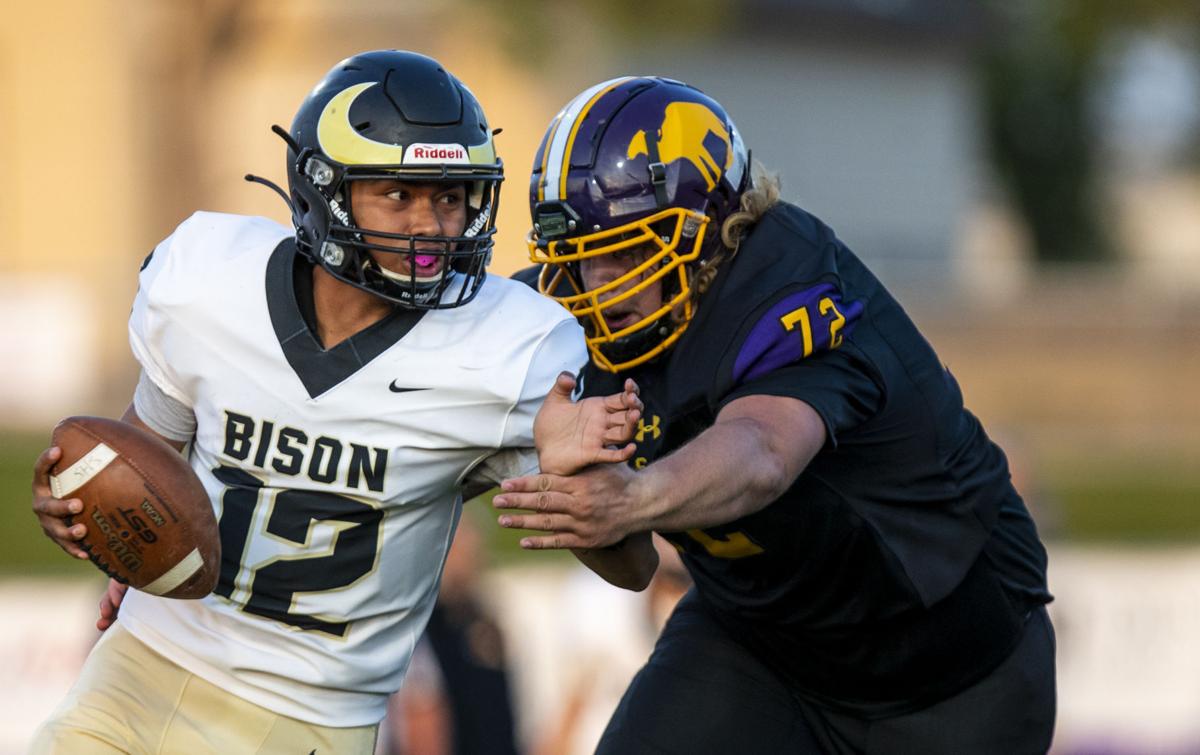 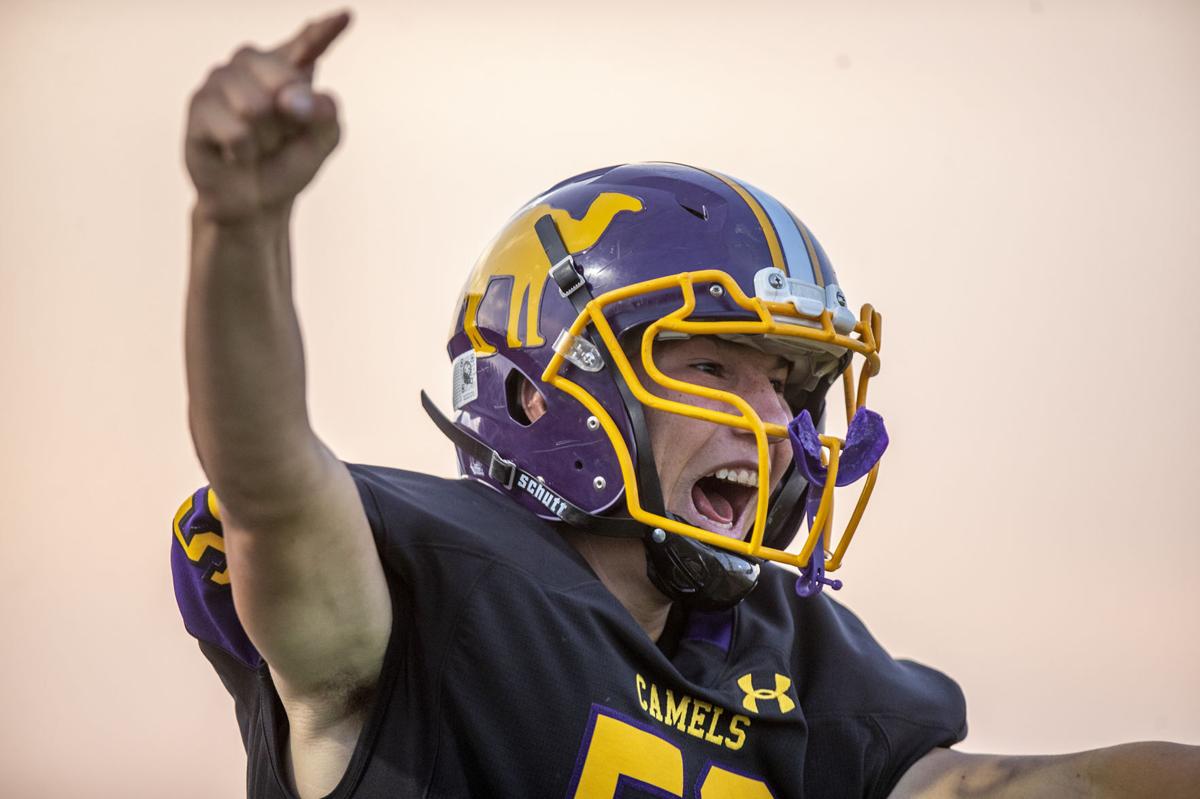 Sophomore Valera McAdams cheers on teammates from the sidelines Friday evening as the Camels took on Cheyenne South for homecoming. 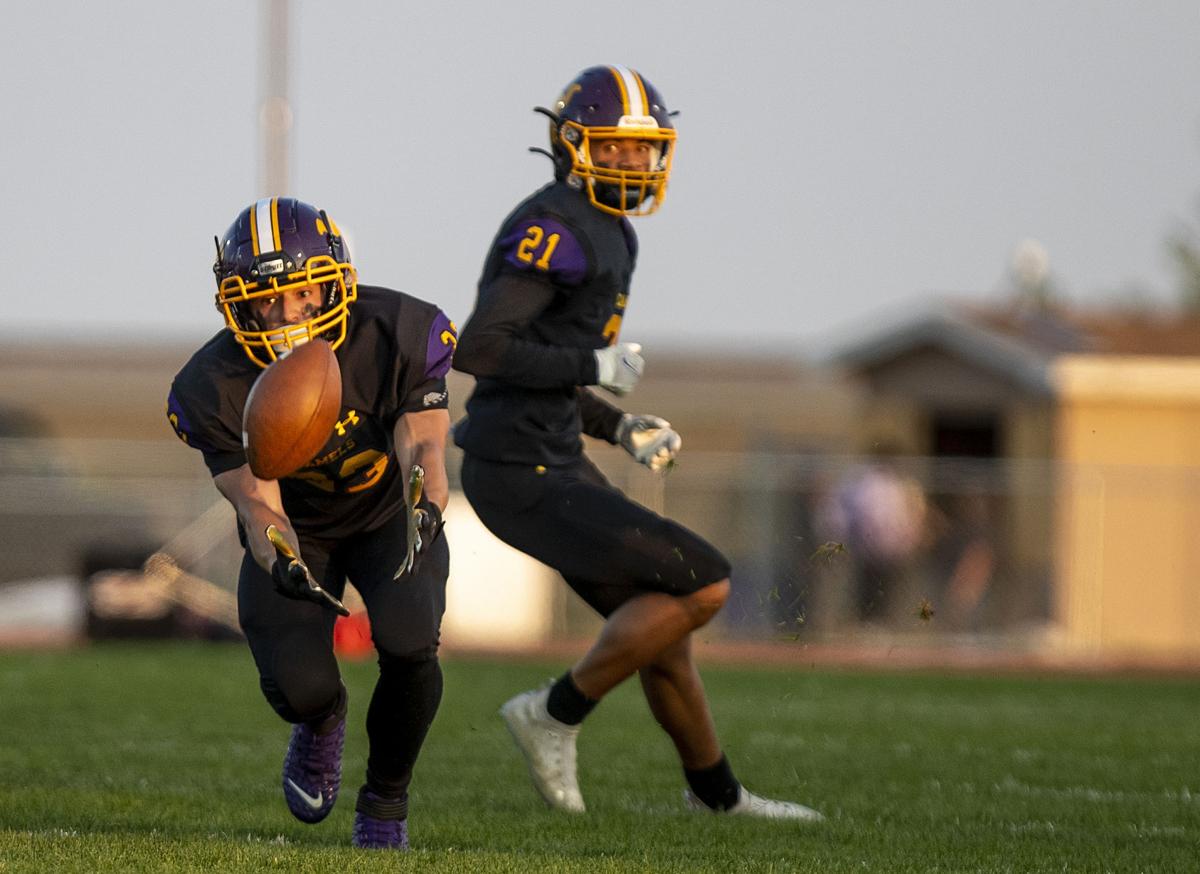 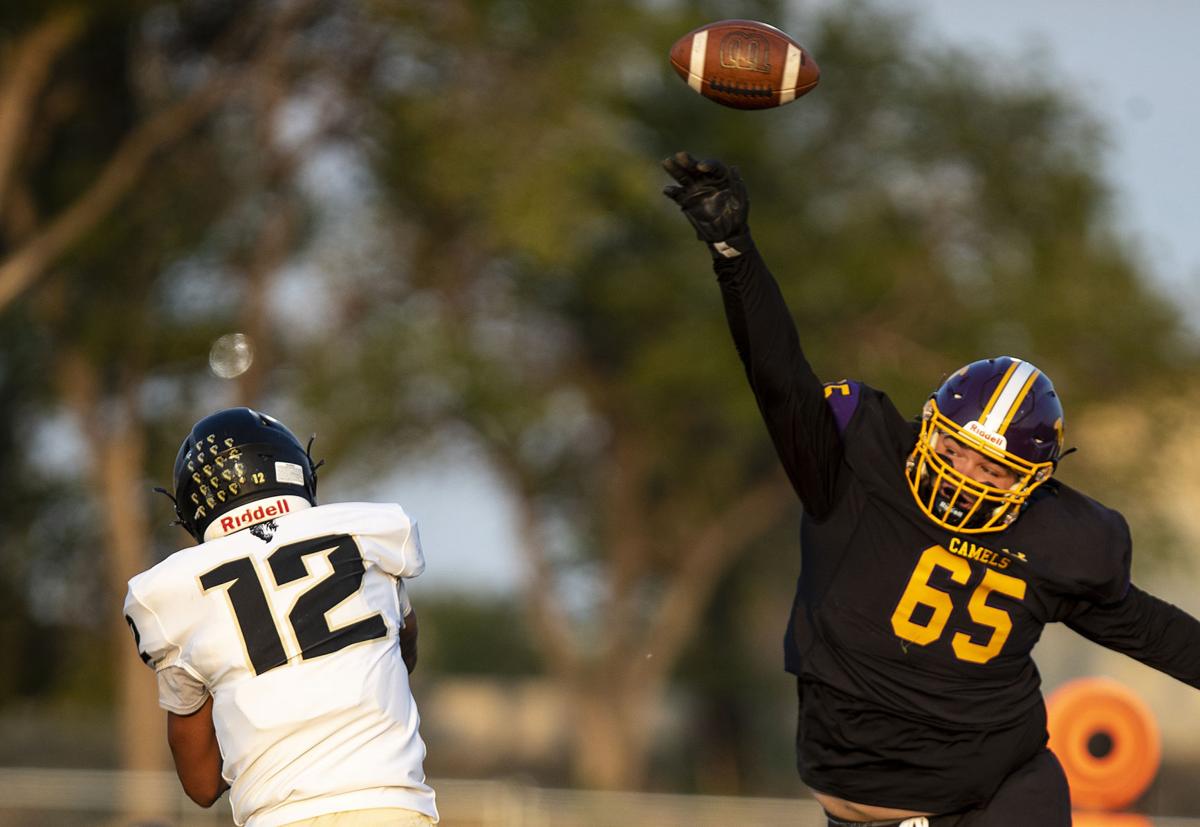 Senior James Pelton knocks a pass from Cheyenne South quarterback Osayas Garcia off course after getting his hand on the ball Friday on homecoming.

The Camels take the field before playing Cheyenne South for homecoming earlier this season.

Sophomore Valera McAdams cheers on teammates from the sidelines Friday evening as the Camels took on Cheyenne South for homecoming.

Senior James Pelton knocks a pass from Cheyenne South quarterback Osayas Garcia off course after getting his hand on the ball Friday on homecoming.

The win was also the first time the Camels have won a homecoming game in five years, sophomore quarterback Aidan Dorr said.

"It was a good feeling today," Dorr said. "After not winning homecoming for fives years, it was a great feeling to get in front of the huge crowd tonight and just go win one."

The Camels totaled 560 yards of total offense, including 491 rushing yards and seven rushing touchdowns. Campbell County passed for 69 yards and another two scores.

On special teams, the Camels had five returns for 99 yards and one touchdown.

The Camels took control of the game right from the start with a five-play, 74-yard scoring drive to open the contest. The drive's biggest play came from junior Ian Carter's 43-yard run to set up senior Will Miller's 2-yard touchdown run to give the Camels an early 7-0 lead over the Bison.

The opening drive would be the first time Miller found the end zone on Friday, but it wouldn't be the last. After the Camel defense forced a South punt on its first offensive drive, Miller broke a handful of tackles on his way to scoring on a 55-yard run to grow the lead to 14-0.

After Campbell County forced a second consecutive three-and-out by the Bison, senior Brady Tompkins returned the ensuing punt 45 yards for a touchdown to give the Camels a 20-0 lead after the extra point was blocked.

The Camels found the end zone again at the end of the first quarter on a 12-yard touchdown pass from sophomore quarterback Aidan Dorr to senior tight end Logan Dymond to make the game 27-0. Dorr connected with wide receiver Jeff Pelton on a 40-yard pass the play before to set up the touchdown.

After the two teams traded punts, senior defensive lineman James Pelton recovered a South fumble to give the Camels the ball back at the Bison's 5-yard line. The next play, freshman quarterback Mason Drube took advantage of his time under center by throwing a 5-yard touchdown strike to senior wide receiver Jace Walter to bring the Camels' lead to 33-0.

The Camel defense forced yet another South punt on the following drive before Miller found the end zone for a third time on a 62-yard touchdown run to bring the score to 40-0 with eight minutes left in the second quarter.

Campbell County was able to score two more touchdowns before taking a 53-0 lead, and a running clock, into the locker room at halftime. In the second half, the Camels scored two more touchdowns while the Bison also scored twice to bring the game to its final score of 67-15.

"It's nice to come out with a win obviously and to put ourselves in a better position for November," CCHS coach Andrew Rose said. "It definitely wasn't the best game we played because it was a little bit sloppy but it was definitely a step in the direction we want to be heading this season."

Miller led the backfield for the Camels with six rushes for 206 yards four touchdowns. Ian Carter ran for 143 yards on four carries and one score.

The Camels improved to 2-2 on the season with the win and have plenty of momentum nearly halfway through the season. After a week one loss to No. 1-ranked Rock Springs, the Camels have blown out Laramie and Cheyenne South and nearly upset the defending champions of Cheyenne East.

Rose knows the team's 2-2 record is a good indication of the program's growth this year after only winning one game a season ago.

"Record wise, it's nice for October and November because that kind of solidifies our playoff realm," Rose said. "But we still to this day haven't played our best game and we're still looking to improve on the rest of the season."

Campbell County will need to maintain all the momentum it can going into next week. The Camels will host crosstown Thunder Basin who is ranked No. 3 in this week's WyoPrep.com coaches and media football rankings.

"Every week is a stepping stone for where we want to be at the end of the season," Rose said. "Obviously this game is one of the games that is continuously marked on the calendar because it's our crosstown rival.

"To say that we're eager to play this game would be an understatement."

The Bolts are 5-0 against the Camels since TBHS opening in 2017. Campbell County will host Thunder Basin at 6 p.m. Friday at Camel Stadium.